KERA’s acclaimed television program, Frame of Mind, is returning this fall. Now in its 30th year on the air, the program features the best independent film and video from Texas-based filmmakers. In a first for the program, this year the locally produced series will be shared with PBS member stations across Texas, meaning more audiences than ever will have access to stories and films that make our state so unique.

“For almost three decades, Frame of Mind has delivered distinct Texas stories into the homes of North Texas from very talented Texas filmmakers,” says Bill Young, Vice President of Television Programming at KERA. “Several films in this year’s lineup speak to our present and future by giving a deep understanding into our past. We are extremely excited to be able to share this year’s series with a statewide audience throughout Texas.”

Frame of Mind has grown into a multi-episode TV series, presented by KERA’s Art&Seek and produced by Bart Weiss, co-founder of Dallas VideoFest and the Video Association of Dallas. The 30th season will air Thursdays at 10pm starting October 6 through December 15.

This season will showcase a diverse range of Texas filmmakers as they explore various aspects of our rich Texan culture. The films highlight the joys of connecting with others, the distinctiveness of our vibrant heritage and provide viewers with a deeper understanding of the shared bonds and history of our state.

“For 30 years, we have been showing the films of Texas filmmakers on Frame of Mind here in North Texas. We have shown the stories of joy, sorrow and the unique spirit of Texas, but only if you were in the footprint of KERA’s signal,” says Bart Weiss. “Now, the diverse stories of Texans, told by a diverse group of independent filmmakers, can be seen statewide. The films on Frame of Mind take us deeper into the stories of our neighbors, all done with unique styles and a Texas flair. Watch, and change your frame of mind.”

Take a look at this season’s schedule of Frame of Mind: 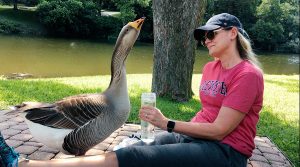 Honk
Director: Cheryl Allison
Running Time: 47 min Documentary
Dumped and alone at a city park, Honk the goose spends his days dodging cars, begging for food and looking for friends. Cheryl and Honk’s paths cross unexpectedly, and what follows is a story in which fairy tales are made. During an unprecedented time of lockdowns, this unlikely pair turn to each other for companionship. With close to 80,000 followers on Instagram, Honk has become a much-needed symbol of hope, friendship, and love during an overwhelming time.

In this compilation of shorts, we look at music, food, and other quirky things that make Texas, Texas.
Air Date: October 13 at 10 p.m. 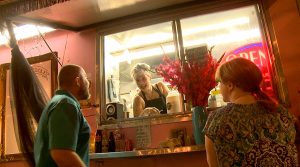 Southbound & Truckin’
Director: Daniel Earney
Running Time: 14 min Documentary
Get to know the colorful characters creating some of the best dishes in Austin. Sixty of Austin’s best food trucks compete in a six-day taste-off to determine who takes home $10,000 and the title of the best meal on four wheels.

Old Fashioned Gals
Director: Brian Schwarz
Running Time: 29 min Documentary
Farmers by day, musicians by night. Whether or not their music brings them fame and fortune, Melissa and Rebecca will navigate life the old-fashioned way: together.

If This Tea Were My Life
Director: Grace Kim
Running Time: 1 min Animation
A short, animated poem about life and tea.

Birds
Director: Katherine Propper
Running Time: 14 min Narrative
Moments in the lives of Austin teenagers during the heat of a Texas summer.

We all have family and the drama that comes with them. These four stories take a deep dive into what leaves scars and what bonds us.
Air Date: October 20 at 10 p.m. 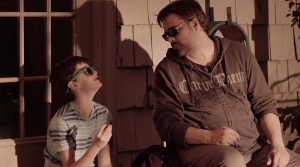 Flesh and Bone
Director: Tonya Holloway
Running Time: 20 min Narrative
Thomas Wescott has survived poverty, segregation, wars, and 13 American presidents. What he hasn’t survived is the death of his daughter. On the anniversary of her death, Thomas makes his usual visit to Blues Jook and Chicken, his refuge from society, and gets an awakening when he mistakes the newly hired waitress for his daughter who’s been dead for 30 years.

A Placement
Director: Allison Mabe
Running Time: 14 min Narrative
It’s the first day young foster mother Andi takes in troubled teenager Kate. During a visit with a caseworker, Andi is warned about Kate’s restlessness at night due to past trauma. After Kate arrives, tension ensues when she acts up in the evening and tests Andi’s resolve to create an unconventional family.

Nut Cracker
Director: David Pinkston
Running Time: 19 min Narrative
Tommy, 11, lives with his father, Jack, recently paralyzed after a car accident. Tommy’s mom has disappeared from their lives and Jack is struggling to come to terms with his new disability and being a responsible father for the first time.

A Matter of Life and Death
Director: Travis Messersmith
Running Time: 4 min Narrative
Chris is at the end of his life and needs to make some final decisions. Gary, an urn salesman, hopes to point him in the right direction.

Texas life, culture, and history is intertwined with its border with Mexico. These 4 films show different versions of how the border has affected Texans. 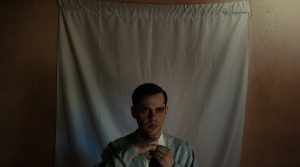 Peor es Nada
Director: Gabriel Duran
Running Time: 14 min Narrative
Marco has nothing left in Mexico. He is motivated to go to the US to reunite with his wife and newborn child by any possible means. He ends up in the US not knowing how he got there. With a metal box attached to his arm, he must find his way to his family.

El Fantasma
Director: Arturo R. Jiménez
Running Time: 24 min Narrative
In the fall of 1963, Lee Harvey Oswald travels to Mexico City in pursuit of a visa to the Soviet Union. At the Cuban Consulate, he meets a woman, Silvia Duran, who might be the key to getting what he wants. When his application is rejected, Oswald flees back to the States. Less than 2 months later, President John F. Kennedy is assassinated and the course of history is forever changed. Based on real events.

Folk Frontera
Director: Alejandra Vasquez, Sam Osborn
Running Time: 14 min Documentary
A portrait in magical realism of life in the borderlands. The film follows two fronteriza women as they struggle to find their place in the vast Chihuahuan Desert, a region whose culture is thousands of years old, but which is bisected by the U.S.-Mexico border.

Translation/La Traducción
Director: Gabriel Duran
Running Time: 8 min Narrative
At night in a small Texas town newly appointed detective Alvin Flores is forced to choose between his duty and his personal feelings when he starts to find more information about the person he pulls over.

EPISODE 5: THE ARTISTIC SPIRIT OF TEXAS 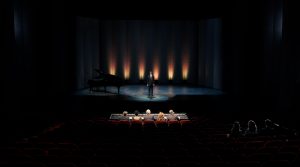 In the Space Between Ages
Director: Travis Lee Ratcliff
Running Time: 9 min Documentary
A portrait of the sculptor Dony MacManus who has rejected much of contemporary art in favor of a return to the ideals of the Renaissance. Dony’s life and work raises questions about our experience of time and history. How do we navigate the past, tradition, and form our identity in the present in response to these forces?

Blue
Choreographed by Joy Bollinger
Filmed and Edited by The Digibees
Co-produced by Bruce Wood Dance & Redirecting Dance
Running Time: 10 min
Dance
A creation woven from the stories of Bruce Wood Dance members and their experiences with mental health throughout the pandemic. Ranging from calm to complicated, the work speaks to the unique paths that led us through a year of isolation, contemplation, and restoration.

Sky
Director: Lance Childers
Running Time: 20 min Narrative
A young pianist, Ben, finds refuge from the tangles of his obsessive-compulsive disorder through music. After meeting a new girl at school, he writes a beautiful, free-flowing piano composition. When Ben’s music teacher advises that he play the piece during his audition for a prestigious music conservatory his increasingly rigid approach to music destroys his only source of relief from mental anguish and jeopardizes his relationships.

Zapatería
Director: Travis Lee Ratcliff
Running Time: 3 min Documentary
Norman Vilalta is a bespoke shoemaker based in Barcelona, Spain. For Norman, a whole cosmos of meaning can be seen through the keyhole of his craft which inspires us to pay closer attention to the beauty in our everyday experiences.

In Search of Lost Continents
Director: Travis Lee Ratcliff
Running Time: 16 min Experimental
Two sisters leave their home in rural east Texas to seek a better life. They soon discover they are being pursued by a man they recognize from their dreams

EPISODE 6: FIGURING IT OUT

During difficult times, these fascinating characters figure a way out.
Air Date: November 10, 2022 at 10 p.m. 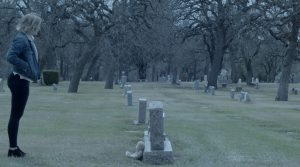 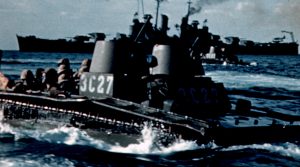 The Barber of Maydelle
Director: Curtis Craven
Running Time: 4 min Documentary
Marvalene is the 84-year-old barber of the tiny East Texas town of Maydelle. She has an attitude.

I Know the End
Director: Jacob Gusentine
Running Time: 14 min Documentary
What heals the healer? A portrait of Remington Johnson, a hospital chaplain with a passion for weightlifting.

Tales of an Iwo Jima Survivor – Corporal Don Graves, USMC, Retired (Part 2): Enlistment to Iwo Jima Invasion, Day 1
Director: Scot Miller
Running Time: 21 min Documentary
Two days after the December 7, 1941, attack by the Japanese on Pearl Harbor, Don Graves walked to his local Marine Corps recruiting office in Detroit to enlist. However, he was sixteen and too young, Graves returned and enlisted. Two and a half years later he ended up with a flamethrower strapped to his back landing on the beach of the highly fortified Japanese island of Iwo Jima in what was to become one of the fiercest and bloodiest battles of World War II. This is his story and the story of so many who served in the Pacific in WWII.

Don’t You Go Nowhere
Director: Bryan Poyser
Running Time: 8 min Narrative
A jazz dynamo belts his way through his weekly set until he makes an unexpected connection with an audience member in this short film about the power of music over memory.

EPISODE 8: MYTH OF A COLORBLIND FRANCE BY ALAN GOVENAR 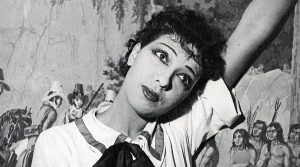 Myth of a Colorblind France
Director: Alan Govenar
Running Time: 60 min Documentary
For more than a century, African American artists, authors, musicians, and others have traveled to Paris to liberate themselves from the racism of the United States. This film interweaves the thoughts of Black artists residing there today with the stories of historical figures who traveled to the country beginning in the 19th century.

The Little Glass Slipper as Performed by the Queen of France and Her Friends
Director: Cara Johnston and Courtney Miles
Running Time: 57 min Narrative
Follow the antics of Marie Antoinette and her aristocratic friends trying their best to stage a production of “The Little Glass Slipper” on the day the Bastille is stormed. Chaos ensues as both play and Ancien Régime fall apart. This piece was recorded on Bastille Day 2021 at the historic Majestic Theatre in Dallas, Texas.