On SMU campus, the Meadows Museum promotes its newest exhibit with the bold, eye-catching slogan, “Fortuny Who?” Indeed, most people do not know the name Fortuny or think of Fortuny as one of the artistic greats. 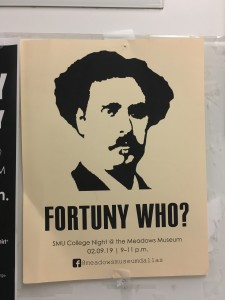 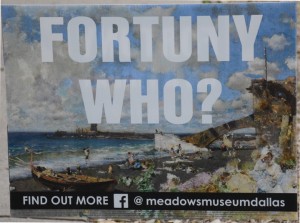 “Even though we today in America, haven’t really heard of Fortuny, he was a household name in artistic circles in his lifetime and right after his lifetime,” said Amanda Dotseth, curator at the Meadows Museum. “There’s wonderful quotes from 19th-century Paris. ‘You have to see Fortuny’s paintings!’ He’s been relegated to obscurity to some extent, particularly in the U.S.” 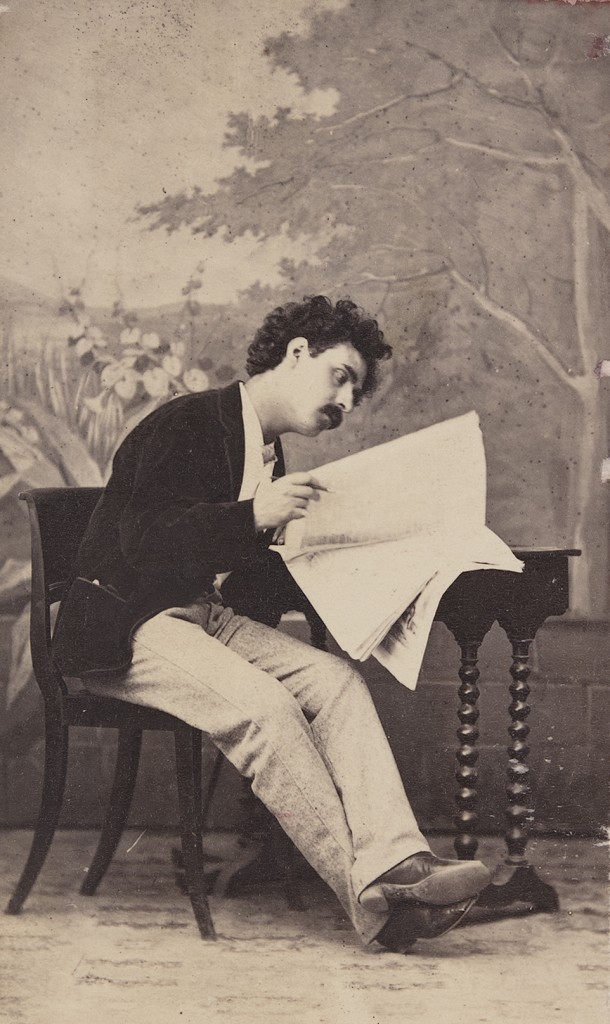 The Meadows Museum is exhibiting the works of Mariano Fortuny y Marsal in “Fortuny: Friends and Followers.” Emphasis on ‘followers.’ With over 70 works, the exhibition maps the reaches of Fortuny’s influence, which many artists described as “Fortunismo.” (Yes, he had his own -ism.)

Of 19th-century celebrity status, Fortuny traveled with an entourage whenever he went abroad. This entourage included members of the Madrazo family, a Spanish artistic dynasty Fortuny married into, as well as artists Eduardo Zamacois and Martín Rico. Together, they visited Spain and north Africa.

Then there were the artists who did not know Fortuny personally, but were certainly influenced by him. American artist William Merritt Chase, also exhibited in this 23-artist exhibit, did not get the chance to meet Fortuny before his untimely death. (He died at 36.)   Chase instead traveled to Venice to meet Fortuny’s widow, Cecilia.

“So there was a deep affinity [for Fortuny.] Part of what we are trying to show here is that kind of relationship. Hence why it’s ‘friends and followers,’” Dotseth said. 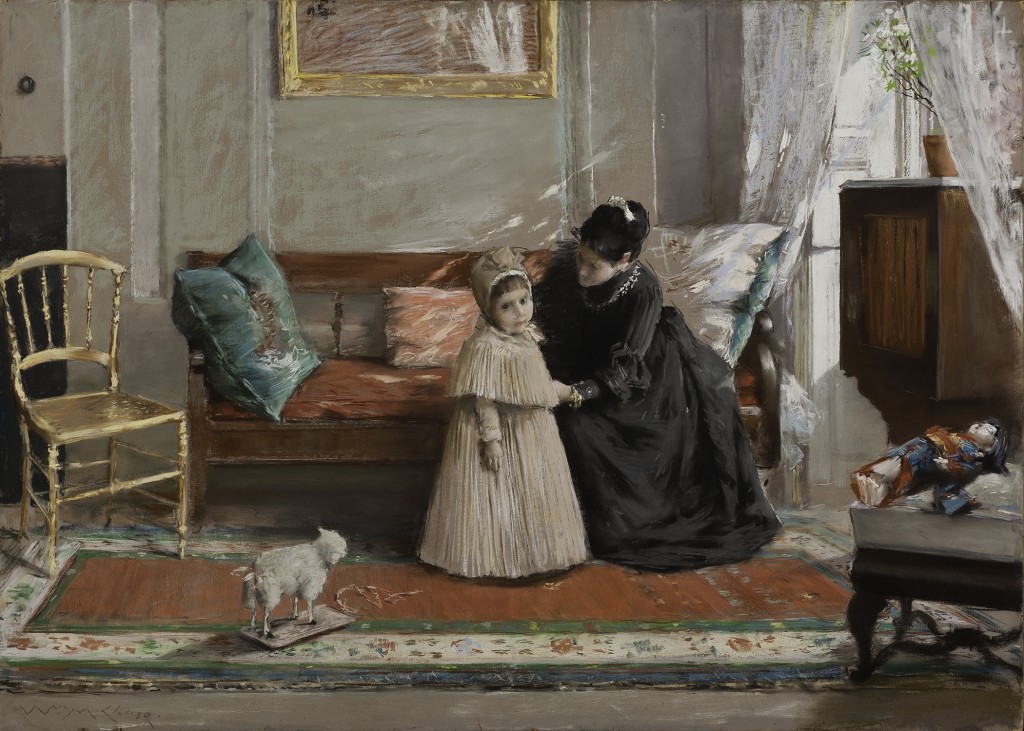 “Mrs. Chase and Child (I’m Going to See Grandma)” by William Merritt Chase. This painting is on loan from the San Antonio Museum of Art. Credit: Meadows Museum

Fortuny’s art sold like proverbial hot cakes. “He had a very prominent dealer in Paris who sold his works before he could even finish painting them. That was kind of his bread and butter; that was what he was known for,” Dotseth said. Fortuny’s art was coveted by dealers as far as America. Instead of painting grandiose historical scenes like the academicians of his time, Fortuny painted everyday scenes.  As the art world turned toward impressionism, his approach quickly garnered popularity. Formally trained, Fortuny was also famous for his technique and artistic skill.

Dotseth said we know Fortuny did not care to show his art at the celebrated art salons of France. Fortuny wanted to paint for consumers instead of formal academia. He made a fortune (no pun intended) doing this.

“We know he was formally trained. He was very talented early on. He was sort of in the right place at the right time,” Dotseth said. “He was not only a very talented painter, but he figured out that you could paint certain kinds of subjects that would be popular—and sold wildly. We know that by the time he died, he was very ambitious and he was trying to break away a little bit from his dealer.”

Dotseth explained, “Nowadays we talk about musicians who sign these terrible contracts with record companies, and it’s a little bit like that. He had an arrangement with his dealer and was feeling stifled. His dealer wanted him to paint these same things that sold so well, and he wanted to break out.”

“Nowadays we talk about musicians who sign these terrible contracts with record companies, and it’s a little bit like that.”

In one painting, Fortuny pokes fun at French artistic academics. On loan from the National Gallery of Art in Washington D.C., “The Choice of a Model” is a literal depiction of the male gaze: five ornately dressed men ogle a nude female model in the 18th century.

“They’re looking at this nude model here, because of course a key part of artistic training was drawing from life, and drawing from nude models. But he’s kind of playing with this idea, because they don’t look like particularly sophisticated, learned men. And they’re kind of ogling this beautiful woman and have their backs turned to what Fortuny’s put in the background here, which is all these wonderful historic works of art, many of which we can identify,” Dotseth said.

Fortuny thought the academics should be studying historical works of art, instead of using their practice as an excuse to leer at nude models. 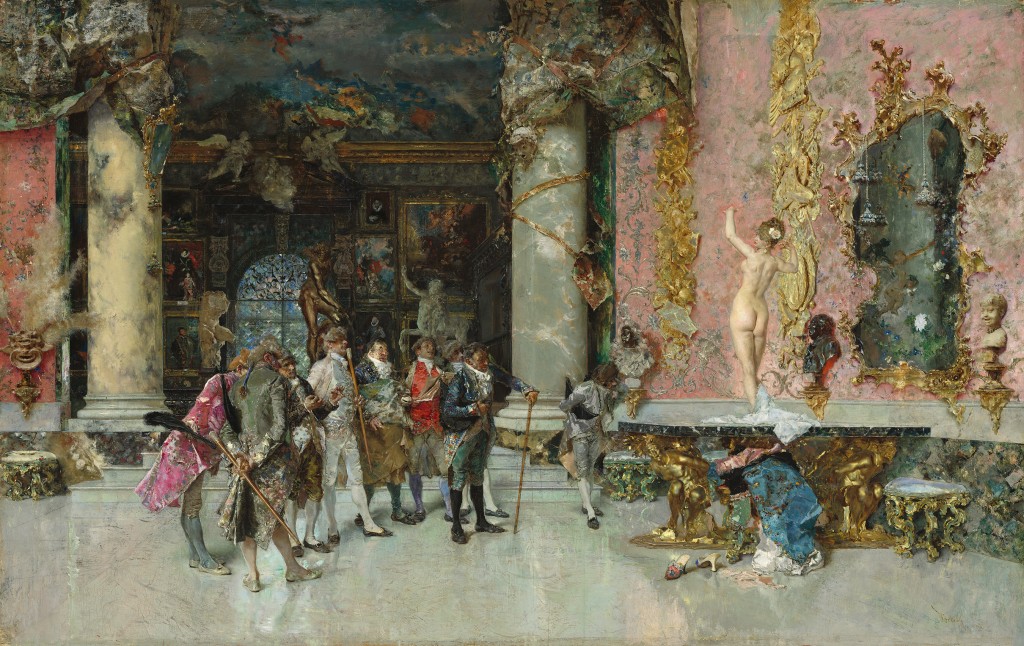 “The Choice of a Model” by Fortuny on loan from The National Gallery of Art in Washington D.C. The historical works of art are in shadow beyond the columns. Photo credit: Meadows Museum

“The Choice of a Model” took six years to finish. “Again, this one went to an American collector—sold before he even finished it,” Dotseth said.

Part of Fortuny’s popularity came from being an “orientalist” painter, meaning he, along with many other western artists, exoticized people and objects from Spain, Asia, and Africa. They had little to no concept of where the artifacts they were painting were from. An artist would sometimes mix up outfits, subjects, and artifacts in one painting. One such painting was Jean-Léon Gerome’s “Tiger on the Watch.” Gerome added a South Asian tiger on a North African landscape he was painting. 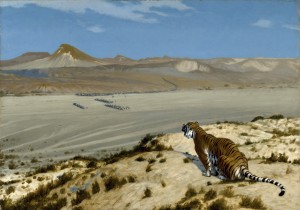 “Tiger on the Watch” by Jean-Léon Gerome. An example of western Europe exoticization of the foreign.

Today, most would find this approach offensive. On the introductory panel to this part of the exhibition, it says, “Imperialist military campaigns and innovations in transportation networks during the second half of the nineteenth century exposed European and American artists as never before to unfamiliar lands in North Africa, the Middle East, and East Asia.” The panel ends with, “These artists were very much of their time and participated in broader trends of bourgeois society, including collecting exotica as well as the art it inspired.”

Fortuny’s last painting, “Beach at Portici,” inspired Meadows’ collection, Dotseth said. Fortuny died while working on this painting of  his family on a beach near Naples. The work is a perpetual work in progress. One of the beach-goers will remain forever faceless.

“This is Fortuny’s last painting. He only lived til 36. He died in 1874. Actually, this was in his studio when he died, so he left it unfinished. While it is mostly finished—you can see this figure here— he never got around to finishing her, painting in her face,” Dotseth said.

The painting is also notable because it shows Fortuny was moving toward an impressionistic style of painting. If he had lived past 36, he would have likely become an impressionist. 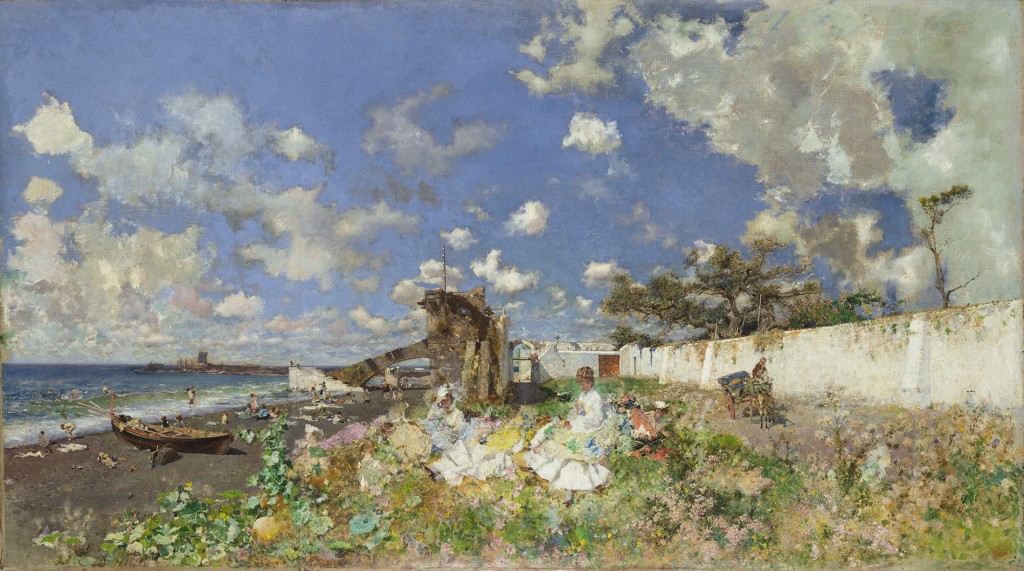 “Beach at Portici” by Fortuny. This is Fortuny’s last, unfinished work. It shows his family on the beach. Photo credit: Meadows Museum

Fortuny died from an illness, though no one can agree on what it was. Some say it was malaria, others a stomach illness. Popular long after his 1874 death, Fortuny’s work was displayed at the 1893 World’s Columbian Exposition in Chicago. Thanks to the Meadows Museum, this 19th-century influential artist is getting another 15 minutes of fame.