Skip Navigation
Home > ArtandSeek.net > 5 Reasons Why The Woofus Will Be Your New Favorite Animal At The State Fair

The State Fair is back and boy are we excited!

But wait — before you go rushing in the gates to get that first corny dog, dedicate some time to explore and take in all the permanent art and structures at Fair Park. Besides being the home to Big Tex, Fair Park is a National Historic Landmark with one of the largest collections of 1930s art and Art Deco architecture in the U.S.

One piece you should definitely check out is the Texas Woofus.  This curious little statue is easy to miss because he’s tucked away between the Swine Barn and the Livestock Birthing Barn, also known as the indoor petting zoo for those of you with small children. He’s worth seeking out, not only because of his quirky appearance, but also because of his colorful backstory.

Here are 5 fun facts about the Woofus that are going to make you want to visit him every time you go to the fair. 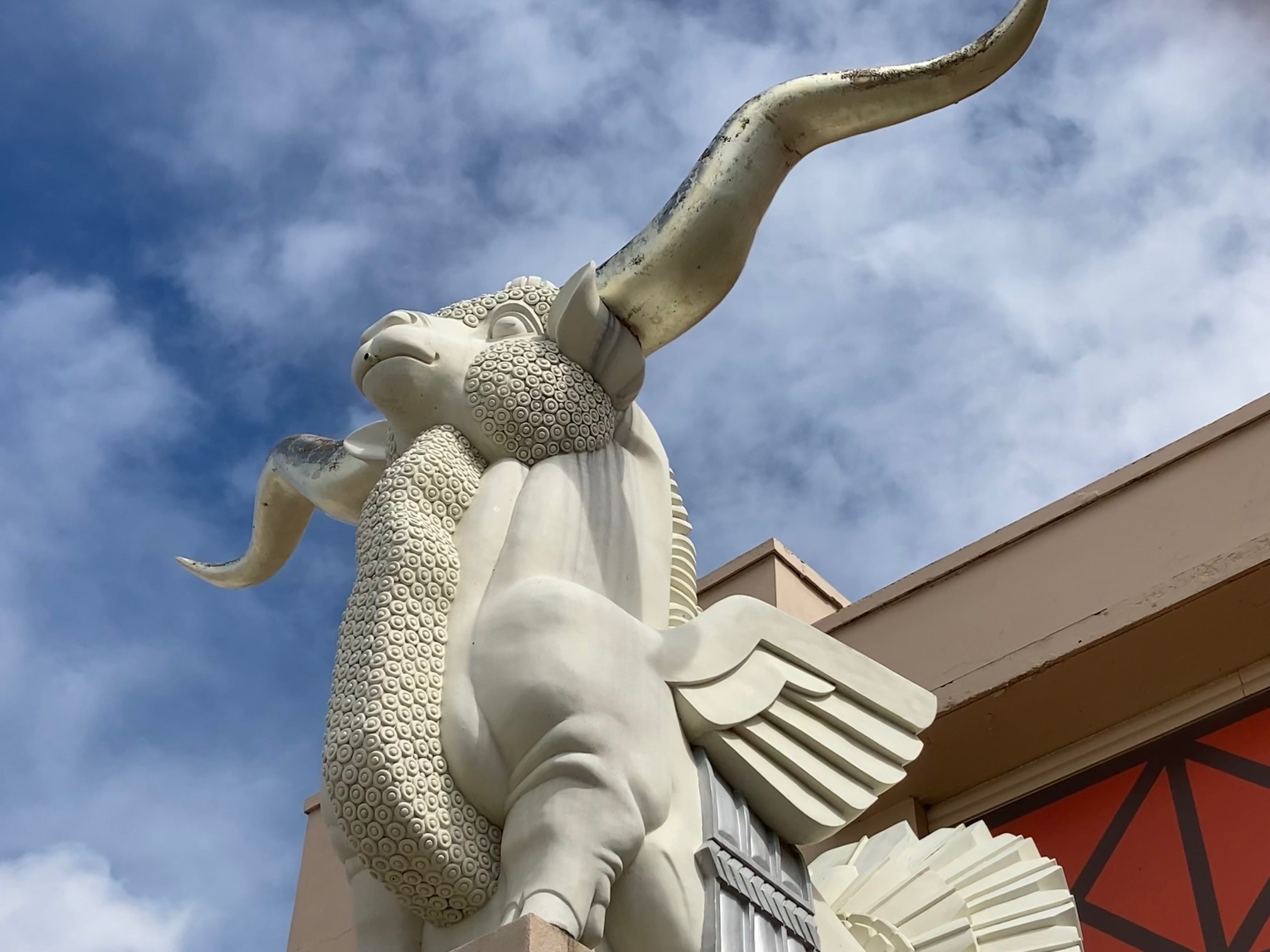 The Texas Woofus is a mythological creature made up of the main staples of Texas livestock. Photo: Therese Powell

The Woofus isn’t a single animal, but rather a mashup of all the livestock you’d find at the State Fair. He’s got the face of a sheep, the mane and neck of a horse, the body of a pig, the wings of a duck, the tail of a turkey and a pair of horns from a Texas Longhorn to complete the look.

So how did this fantastical creature come to be? According to Texas lore, an Australian sheep went on a vacation and visited the State Fair of Texas. While there, the sheep enjoyed corny dogs, the Midway and ahem…all of the animals in the various barns. The result was the Texas Woofus!

2.  He Was Created For A Really Big Birthday Party

Our pal the Woofus was created in 1936 by American sculptor Lawrence Tenney Stevens for the Texas Centennial Exposition, a celebration of the 100th anniversary of Texas’s independence from Mexico in 1836. The party lasted almost 6 months and welcomed over 6 million visitors included then-President Franklin D. Roosevelt. This is when Fair Park became the Art Deco wonderland we know today — The Texas Woofus was just one of many sculptures  buildings, fountains, murals and other notable artwork that were created for the Exposition.

The story goes, George Dahl, who was in charge of planning and designing the Centennial celebration, wanted a piece of art to act as sort of a transition from the Creative Arts area and into the Agricultural space. He tasked Stevens with creating something fun that imbodied the Texas spirit.

After the Centennial celebration, a lot of the art at Fair Park was lost. Murals were painted over, statues were removed, even buildings were torn down. In the case of the Woofus, he was taken down around 1941, but no one can say definitively why, or what happened to him.

There are a few theories though.

“No one knows for sure what happened to him, but there was controversy around the art at the Centennial,” said Craig Holcomb, former executive director of Friends of Fair Park. “There is clear indication in the newspapers at the time that the Texas Centennial had some very definite adult entertainment. The powers that be putting on the Centennial came to a deal with the religious community that it would not complain during the Centennial about the adult entertainment. And in return, this pagan idol, which looked a lot like Baal from the Old Testament, would go away.”

Another theory was the statue was damaged sometime in the early ’40s by a crane doing construction work on the opposite side of the street. The statue was taken down to be repaired but was never seen again.

4.  He Has Friends In High Places And His Own Song

The Woofus had been gone for about 60 years and nearly forgotten, when in 1998 Holcomb, then the executive director of Friends of Fair Park, found some old photographs of the beast.  It was love at first sight for Holcomb, who decided the quirky statue must be rebuilt and returned to his rightful place in the agricultural area.

To raise money for the Woofus’ return, Holcomb created The Woofus Dinner, a silly annual event where donors woofed hello to each other and closed the night out with a rousing rendition of ‘The Woofus Song’ whose chorus included the phrase “oink, quack, neigh!” The dinners were hugely successful and over a period of  5 years they raised $60,000 dollars — enough to recreate and reinstall the Woofus.

5.  He Was Born Again…And Again

Sculptor David Newton, the artist behind the sculptures at Freedman’s Memorial Cemetery, was tasked with recreating the fabled beast. He crafted a new statue working from a 2-foot model used for the 1936 original. Unfortunately, just as he finished the cast, the foundry Newton used burned and the second Woofus was lost. Lucky for us, the third time is the charm and a third statue was created and reinstalled in 2002.

So take a stroll down to the Swine Barn and say “Howdy” to the Woofus. He’s perfect for a photo opp and he’ll definitely leave an impression.

Craig Holcomb recalls transporting the new Woofus on a large flatbed truck from the foundry in Azel to Fair Park and the impression the statue made on other drivers when they saw it riding down the interstate.

“I have always thought that every body else on the highway that day must have gotten to wherever they were going and said, ‘You won’t believe what I saw today!’”