You are likely aware that someone designed the building you are in. But what about the park, courtyard or garden outside of it?  We sometimes forget the work of landscape architects. But recently,  UT-Dallas announced the Richard Brettell Award in the Arts, the richest arts prize in Texas. And the first winner? Landscape architect Peter Walker.

Walker is a California native, but he’s responsible for Dallas staples such as the Nasher Sculpture Garden and the remodeling of the UT-Dallas campus. Further afield, he worked on the National 9/11 Memorial in New York City and projects in Barangaroo in Australia.  Walker is on his way to China after a stop in Dallas this week to pick up the award.  He stopped by Think with Krys Boyd to talk about the art that goes into creating outdoor public spaces.

Here are 6 insights from Walker’s conversation with Boyd.

On why he thinks landscape architecture should be collaborative 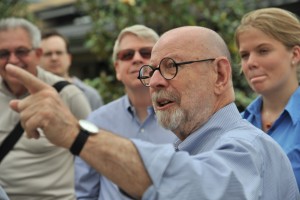 “Well, I always envied architects. They had structural engineers, civil engineers, mechanical engineers, specialists in kitchens… specialist in everything… And landscape architects were lucky if you get an irrigation consultant, that was about as far as it went. But over the last 20 years, partly because of the ecological revolution, and partly because scientists have come in and set up consulting firms, we now have people in soil science, in floriculture, forestry, every conceivable thing. And the teams have gone from maybe one or two consultants, to where… we now have as many as 15 or 16. And that has changed our practice because we now know about things that were only intuitive before.”

“Well it was an ironic thing. As any client, [Raymond Nasher] balked at the amount of money we were putting into this 6 feet of dirt. There was a lot of things in there. Part of it was life science. But part of it was compression: That dirt is mostly sand, which allows the water to drain. We don’t need catch basins or anything like that… But if you’ve ever gone to the beach, sand is really great at compression. So he has these great sculptures, and they bring them in and set them down. They can’t have footings. You can’t build them like a building.  What people don’t realize about the sculpture garden is that its a gallery. It’s not a museum. It’s not a place where people place one thing and stay there forever. They’re moving all the time, and most pieces – there’s only about 25 out there, and he has 600. So they’re constantly moving. These things have to sit on the ground. [Special] dirt is essentially dealing with all these problems, including the biological problems…Before he [Raymond Nasher] died he admitted to me that it [the dirt] really was worth it.”

A post shared by Nasher Sculpture Center (@nashersculpturecenter) on Feb 22, 2017 at 2:47pm PST

On his almost clinical approach to returning to finished projects

“I’m looking for how things are going. Landscapes are alive. The first things you check are vital signs. Are they showing signs of stress? Are some plants growing or are some other plants not growing? I look at wear. At how people are using spaces. Those are faults that I take responsibility for. If they’re cutting across a lawn and I didn’t put a path there, that’s my fault.”

On  redesigning and landscaping the UT-D campus
“Well, I met Margaret McDermott at a party that Ray [Nasher] gave. And she told me about this thing that she had started. She and her husband and several other couples at Texas Instrument. And she said ‘It just doesn’t look right to me. It’s not turning into the way I had hoped.’ So she was looking for a landscape architect who could do a project out there. That could spiff it up, make it look more like a campus because it did look a little like an industrial park. It had very little character. Buildings were not particularly good, except for the library…

She had a dream about this thing. Her solution to that was to do a single project. So we went out and got a contract to do a master plan, to show where this thing was going. Where it was, where it had been and what was coming, and we discovered a number of things. Like, they didn’t really have enough land. They should be conserving land immediately. There were these creeks, that were in the old cotton fields and part of them had been put underground, part of them had been lost, part of them had been civil engineered away- and those were the last remnants of the natural landscape… So we took that scale of thinking and then tried to make a first part. Something distinct enough so you would remember it. And the whole idea was to have something that didn’t look like any other school; yet, looked like something, looked like a campus.” 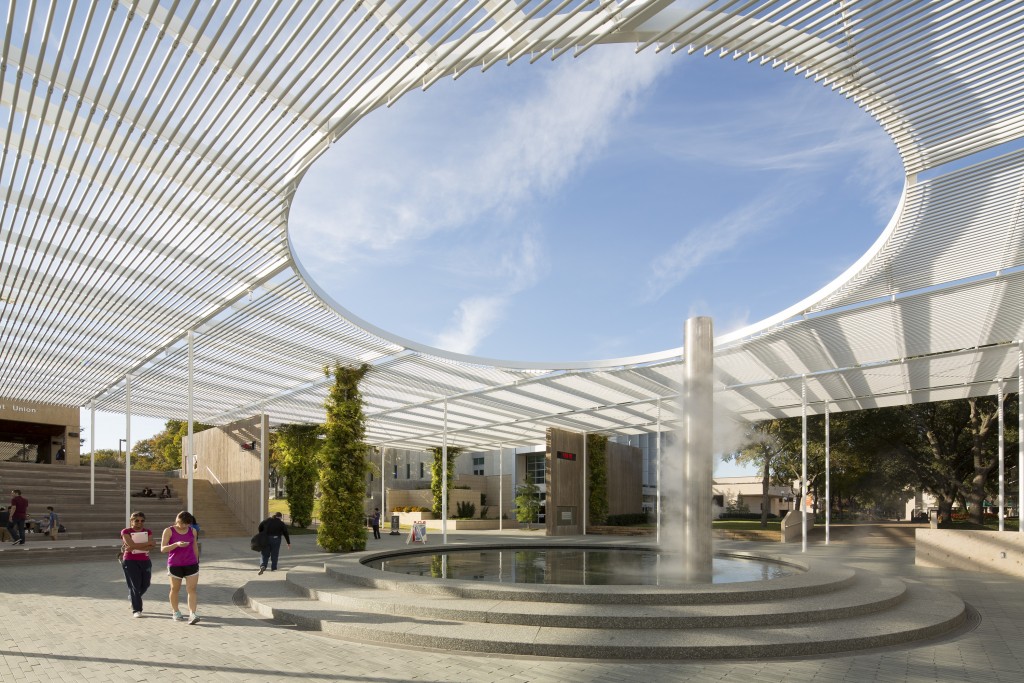 On his approach to the trees at the 9/11 Memorial

“You have to think about the memorial problem….Your first order of importance is the sense of the mood… That’s what the memorial’s about. You have to remember what happened. So you have to somehow make that evident. But you still need it to be interesting. Many people come and need to see other things. One of the major ingredients of the memorial is stillness. So, then these other things have to be there, so the stillness doesn’t become boring, so it gives some color to the stillness, and that’s one of the devices we used. The seasons is another. We make a big thing about that. I think that the optical change as you move through enrich that experience without changing that sense of stillness. Without losing that sense of stillness.”

On the evolution of the Dallas Arts District
“At that time, there was simply the Symphony Hall and the Dallas Museum of Art and nothing much in between. And [Nasher Sculpture Center] was the first new building between those two. And I’ve seen, in my lifetime, the filling in of the district. I remembered when I first went there, it seemed like a long distance; you go to that courtyard  in front of the Dallas Museum with the fountain, it seemed like a long distance down to The Meyerson. It doesn’t seem long today. The trees have grown. It’s in shadow.  I see people now walking up and down. …The district has been a great success”