Humans want contact, want to express themselves — especially during a quarantine. Many have gone online — and found a kind of digital vaudeville where they can lip-synch, tap dance or let their dogs howl. Welcome to the Quarantined Cabaret. KERA’s Jerome Weeks spoke with the founder and manager. 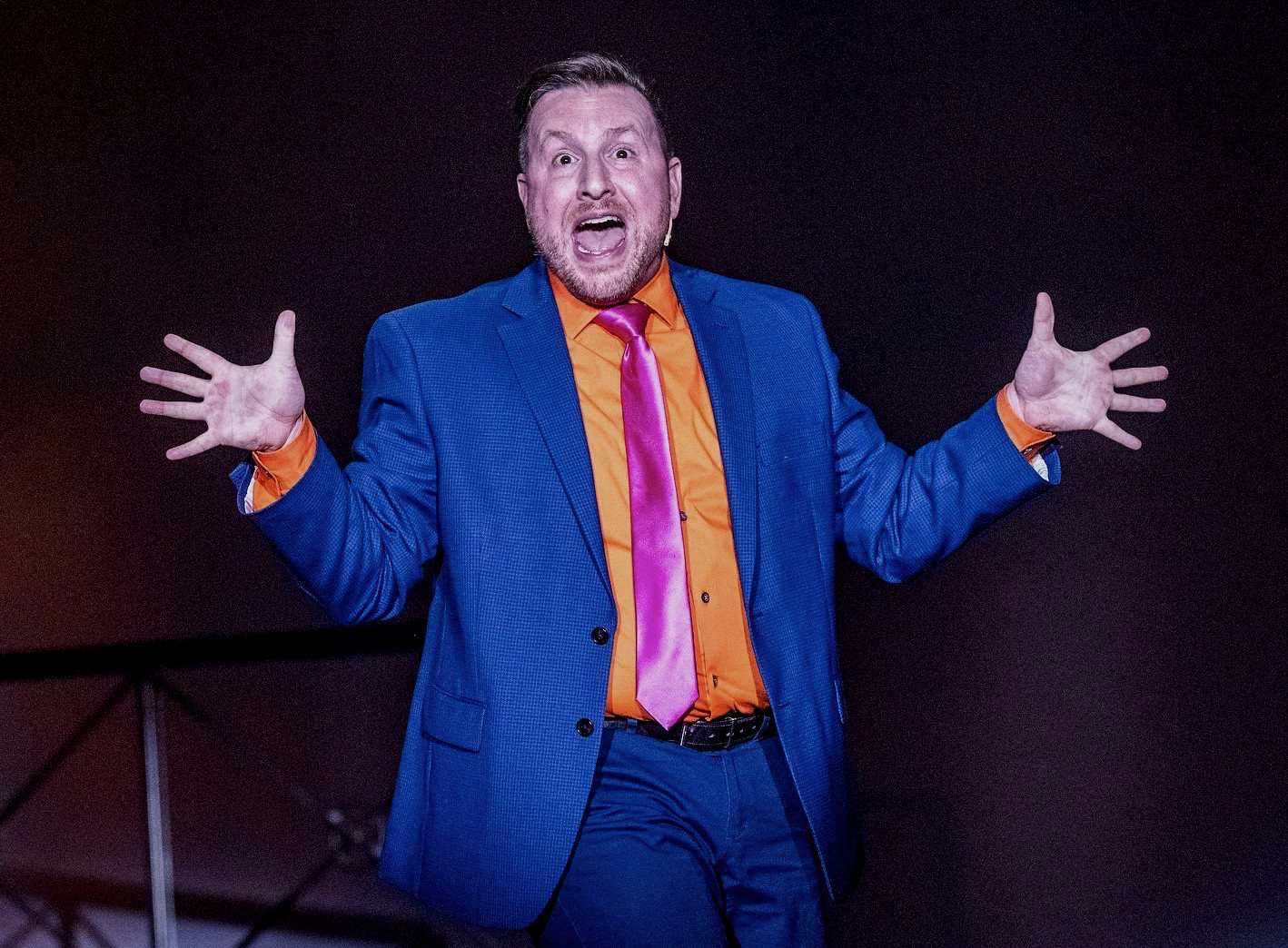 Mikey Abrams . . . in one of his somber moments and obviously not in “Cool Rider” mode. Photo: courtesy of Mikey Abrams

Mikey Abrams had no idea what he was starting when he handed his cellphone to his husband Scott Taylor and asked Taylor to videotape him.

Then Abrams told his bandleader to cue the music.

In the video, the 44-year-old Dallas realtor wears a blonde wig and a pink jacket and lip-synchs to ‘Cool Rider’ from the movie, ‘Grease 2.’

“I did that,” Abrams says, “because I was, like, y’know, ‘Who else is going to be silly and stupid because we need to laugh?’ Cuz I got really, really tired of watching the news and that we were all going to die and be infected and what this president is saying.” 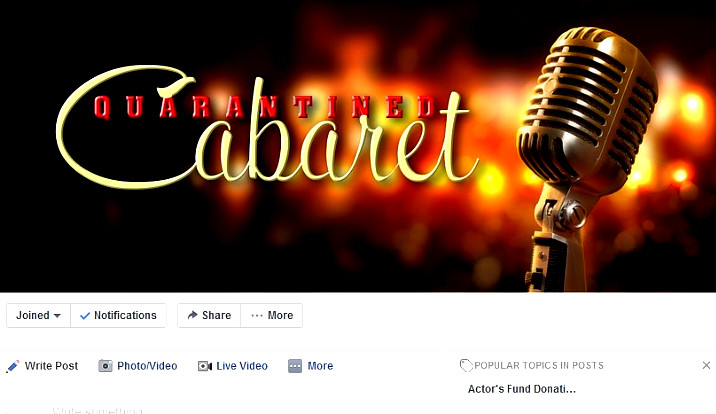 On Tuesday, March 17th, Abrams posted the video to his new Facebook page. There actually were already several online Quarantine Cabarets. But Abrams says, when he created Quarantined Cabaret,  “I didn’t know there were others. I just figured I’d be cooped up drinking and singing anyway, so I just wanted to invite some theater friends in the DFW area to join along in the fun.”

He asked 50 friends. In less than a week, 20,000 had joined, posting performances, making requests.

“We have people overseas. I’ve heard from London. I’m getting some requests from areas as far as, like, the Philippines. Someone today contacted me from Africa. “

But Quarantined Cabaret is just a leetle different. Among the videos, there are bad jokes, drag acts, a tap dancer on a backyard deck. Cats wander through some videos, cameramen crack up in others. 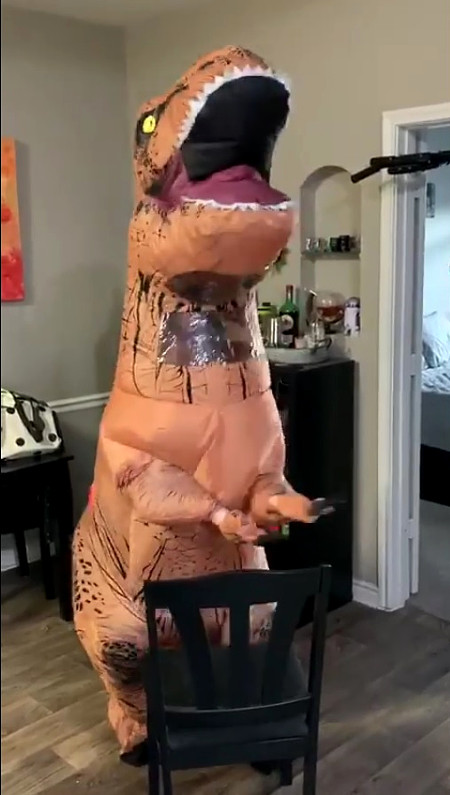 It’s a seven-foot-tall plastic T.Rext as Sally Bowles – you know, like ya do. That’s Araceli Aradillo inside and, yes, she climbs on that chair.

Yes, there are theater kids belting out solos. Also, theater pros and musicians showcasing their chops. People often adapt tunes to reflect our current crisis — that’s now been tagged as “pandemic parody,” and it’s something Abrams encouraged from people posting to Quarantined Cabaret, to address this moment. Kathryn Williams of Dallas put a little healthcare precaution into ‘When You’re Good to Mama’ from the show, ‘Chicago”: “Gotta little motto, always sees me through. Wash your hands for mama, she’ll wash hers for you.”

But there’s also a hula hoop dancer, an aerial silk dancer and lists of favorite Broadway shows.  Euless performer Araceli Radillo performs a song from the musical, “Cabaret” – inside a 7-foot-tall inflatable dinosaur costume. And there’s an actual bulldog named Manolo harmonizing with Adele on her hit,  “Someone Like You.”

“I swear,” says Abrams, “it’s ‘The Gong Show’ on steroids – but nobody’s going to get gonged.”

That’s one of the ground rules that Abrams set from the start. He wants Quarantined Cabaret to be a safe space. So no mean comments about the bulldog, thank you. Or people singing, either. Also no links to material that might be too adult or too political.

“I love the range of acts, of talent, of ages, of diverse people in the group,” he says.

And he’s a sucker for goofy costumes. Linsey Hale as a Little Mermaid who’s sheltering in place  – with a healthy seafood diet.

The Dallas realtor taught high school theater for 15 years — and has performed on local stages — but he says he’s not really sure what to do with all this online theater . . .  and dance and drunken karaoke. He’s bought some “quarantined” domain names but that’s as far as his future planning has gone. He’s mostly just trying to keep up with the deluge. In less than a week, he says, monitoring QC has practically turned into a full-time job.

But Abrams has also been impressed, he says, by all the human need here – for attention, for relief from boredom.

And above all, for empathy.