Art&Seek is highlighting new music from North Texas every Thursday. Click above to hear me talk with Will Rakkar, guitarist and vocalist for rock band Phantomelo for our Music Minute, which airs on KERA FM and KXT 91.7. For more North Texas music, tune in to the KXT Local Show at 7 p.m. on Thursdays. And tell us what you’ve been listening to on Facebook, Instagram or @artandseek on Twitter. 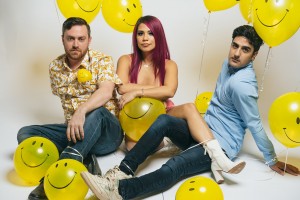 Phantomelo’s new single “The Tempest” starts with a simple, yet dreamy sounding guitar melody that carries through the song.  “Talked about the weather/I didn’t care/I Think I’m gonna stay home/Wait it out,” sings Will Rakkar, soft and soothing.

The song, the band’s first release since 2019’s “Gum Love,” sounds light and it’s fun to listen to. But “The Tempest” carries a more serious meaning. A tempest is a violent storm and that is exactly what the song is about. 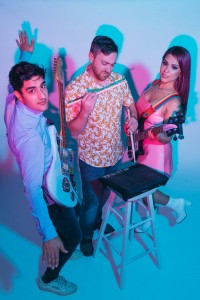 “’The Tempest’ is a song about the planet and what we’re all going through,” said Rakkar. “It’s about how the human mind copes with the always lurking impending disaster.

“It’s also about the unsuitable celebration of apathy at a time when the earth and its resources have never been in greater peril.”

Rakkar said that his interest in conservation was sparked in 2017 when his brother was in the path of Hurricane Harvey. While Rakkar was worried about the safety of his family, he realized people were making light of the seriousness of the disaster on social media. Then he started to become more aware of other natural disasters and the effects of climate change.

“All the natural disasters… mudslides, earthquakes… it just feels like maybe we have a little destructive trail that kind of follows us around through our lives from just simply living our modern lifestyle,” Rakkar said.

Rakkar, who also plays guitar in the band,  met bass player “Panda” Cuenca and drummer Jeff Gerardi in 2017 while all three were navigating the Arlington music scene.  (Rakkar says it’s a hotbed of creativity.) The band originally started as a surf-rock project, but, as things tend to do, Phantomelo evolved. The band now has a robust alternative sound.

“One of the great things about the human experience is trying as many things as possible and seeing what works and what is awesome and what is fun to do and what’s the most rewarding,” Rakkar said.

“The Tempest” is accompanied by a music video produced by Coffee Pot Films that features Phantomelo members performing in front of soothing nature scenes that morph into natural disasters. The video finale is a full-blown trash hurricane – literally. Rakkar said that the band and video crew saved their trash for two weeks to create the visual effect.

“People don’t realize how much waste we create, because they like to hide it from us over here… dump it in the ocean or put it into a pit and set it on fire,” Rakkar said. “What I thought was really great was, here it is! We’re just a small group of people and look how much trash we created in two weeks. It’s insane.”

“The Tempest” was released with a B-Side called “Crimson Tide”, and both will be on the upcoming EP titled, Water Your Friends. Rakkar says the theme of the whole EP is about giving back to the earth. Keep up with their new releases and shows on Phantomelo’s website, Facebook, and Instagram.