Skip Navigation
Home > ArtandSeek.net > A Pop-Up Drive-In And A Live Cabaret – All In A Richardson Parking Lot.

It’s a Saturday night at the drive-in. People in cars are watch coming-attraction trailers for horror movies.  Car hops wearing face masks deliver food to your rolled-down window. The moon glows in the clear night sky.

And then come the live dancers dressed as ghosts! Hoofing it to a spooky old jazz number. You remember this from your childhood, right? Every drive-in theater presented a little vaudeville.

No? Well, this is what Reid Robinson has cooked up to keep business coming to his two bars in Richardson: a funky mash-up, a movie plus an unpredictable, ever-changing variety show. He calls it the Drive-In CarBaret.

Last year, Robinson and his partners bought The Forum, a Richardson hangout that’s been around since 1979. They brought it back to profitability. 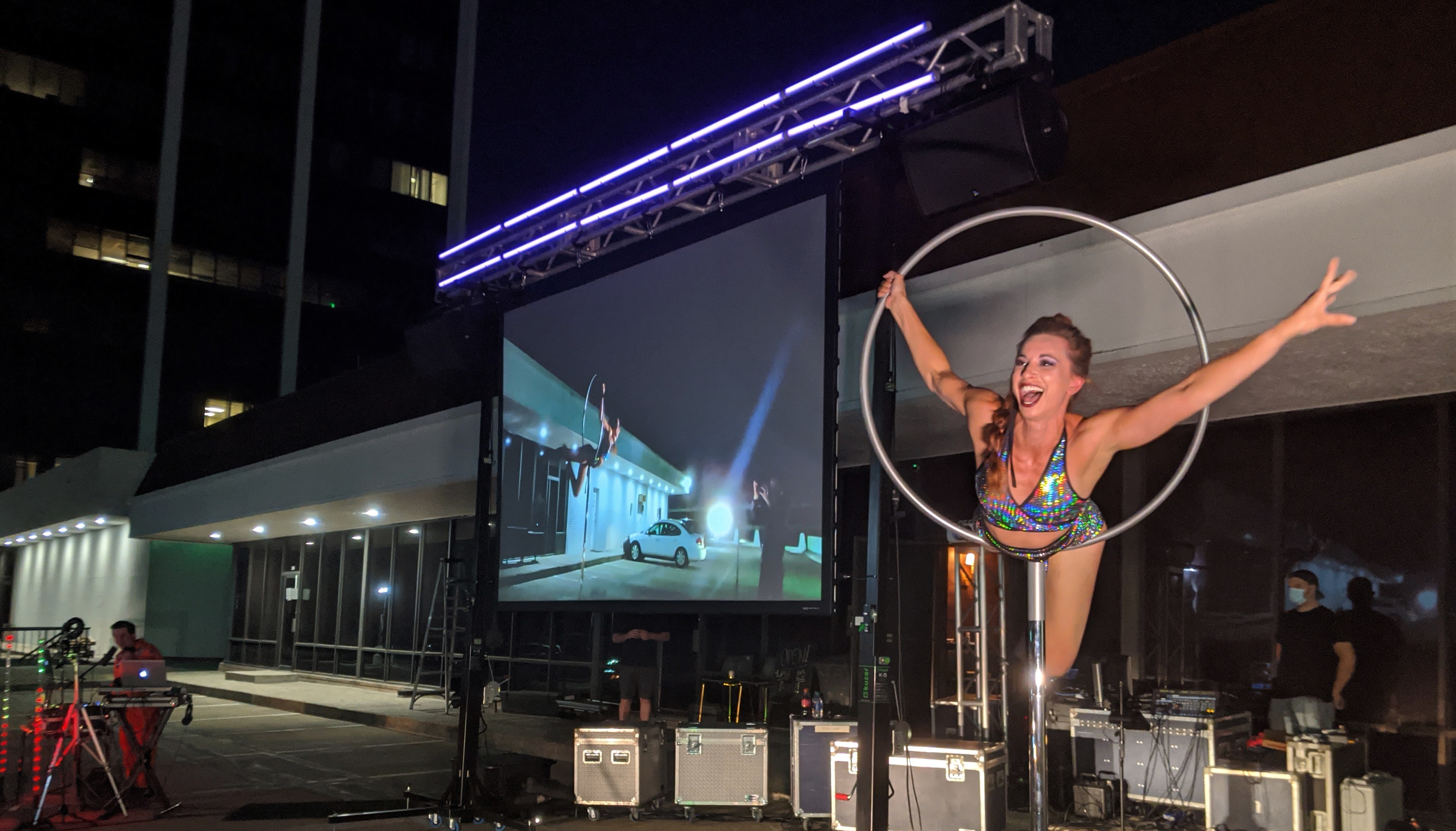 “Then we opened another place next to it called Brizo,” Robinson says. “A little more high-end cocktails. We do flatbreads and pizzas. We opened Brizo on February 29th, so – “

“So your timing was perfect.”

Two weeks after he opened Brizo, Robinson had to shut down both places because of the county’s shelter-in-place order. But soon after, he happened to visit Keller’s Drive-In – the venerable, 55-year-old hamburger joint on Northwest Highway. These kinds of mid-century, car-hop businesses have been near extinction for years, but these days, for obvious reasons, Keller’s has been drawing turnaway crowds.

“And it clicked,” says Robinson. “I’m like, ‘Oh wow, we could do something like this. We could have car-hop service, we could kind of set up our parking lot. We could show a film.’” 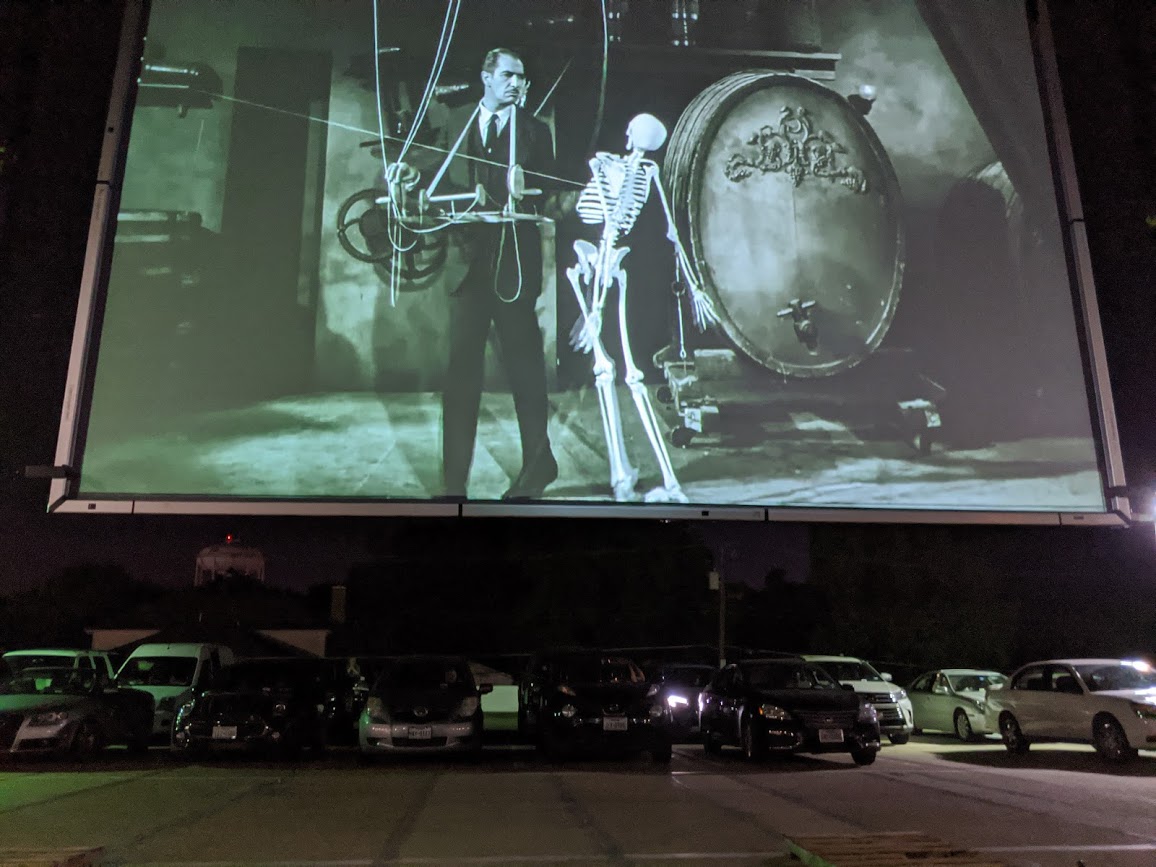 Vincent Price dancing with a friend in 1959’s “The House on Haunted Hill.” Photo: Reid Robinson.

He could do more than show a film — he could put on a show. So far, the CarBaret has featured acrobats, a magician and music acts like Ishi that get people flashing their headlights to the beat. It’s a drive-in rave.

Plus, there’s Paul Slavens. The radio host from KXT-FM is at the keyboards, improvising what he calls ‘stupid songs’ from titles that audience members suggest via Venmo. Titles include “Wilma the Kiwi and the Monkey on the Roof,” “Stinky Feet in the Car” and – an audience favorite – “Home School Sex Ed.”

In creating a pop-up cabaret-with-video-screen-and-food-service, Robinson had some advantages going in. His two bars share a kitchen and a parking lot for 60 cars. Conveniently, the lot’s in back of the Shops at Promenade, the retail center on N. Coit Road. So the drive-in’s 24-foot video screen isn’t a distraction to passing traffic. Robinson also has worked as a DJ for the community radio, KNON, and he’s had experience wrangling video projections and local performers from his days organizing roadshows for movie theater openings.

Before the sun goes down – behind The Forum and Brizo. Photo: Reid Robinson

Plus, he owns a mighty important piece of equipment for this new endeavor: a low-watt FM transmitter. So low-watt it could only be used for things like broadcasting movie audio to a couple dozen car radios.

On April 18th, Robinson announced the first Saturday night Drive-In CarBaret on Facebook – for a screening of “Plan 9 From Outer Space.” It sold out that afternoon. And it’s been selling out ever since. 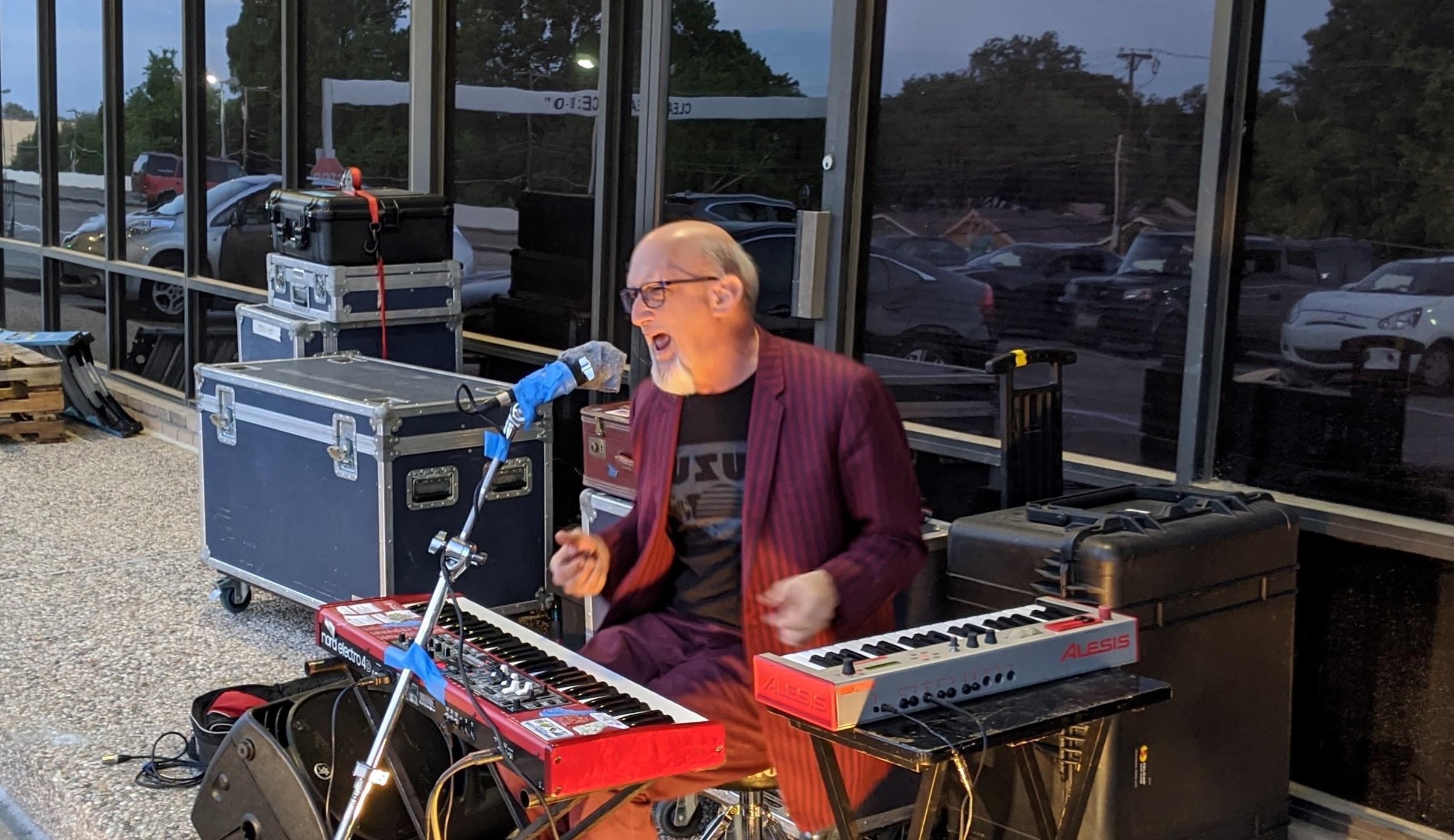 Brandon Jameyson has been a regular at the shows – “The fact that it’s the only game in town doesn’t hurt, y’know?”

Jameyson’s referring to the fact there are only two, classic, drive-in theaters left in the immediate Dallas-Fort Worth area: The Coyote in Fort Worth and the Galaxy, near Ennis. If you’re willing to drive a hefty bit farther, there’s also the Brazos in Granbury.

“So I thought, yeah, I’m going to check this out,” says Jameyson. He’s a member of the local band, The Sutcliffes, and he’s known Robinson for years. “Plus, we have a T-Bird convertible. So it’s the complete drive-in experience: a beautiful night and a convertible. It doesn’t get any better than that.” 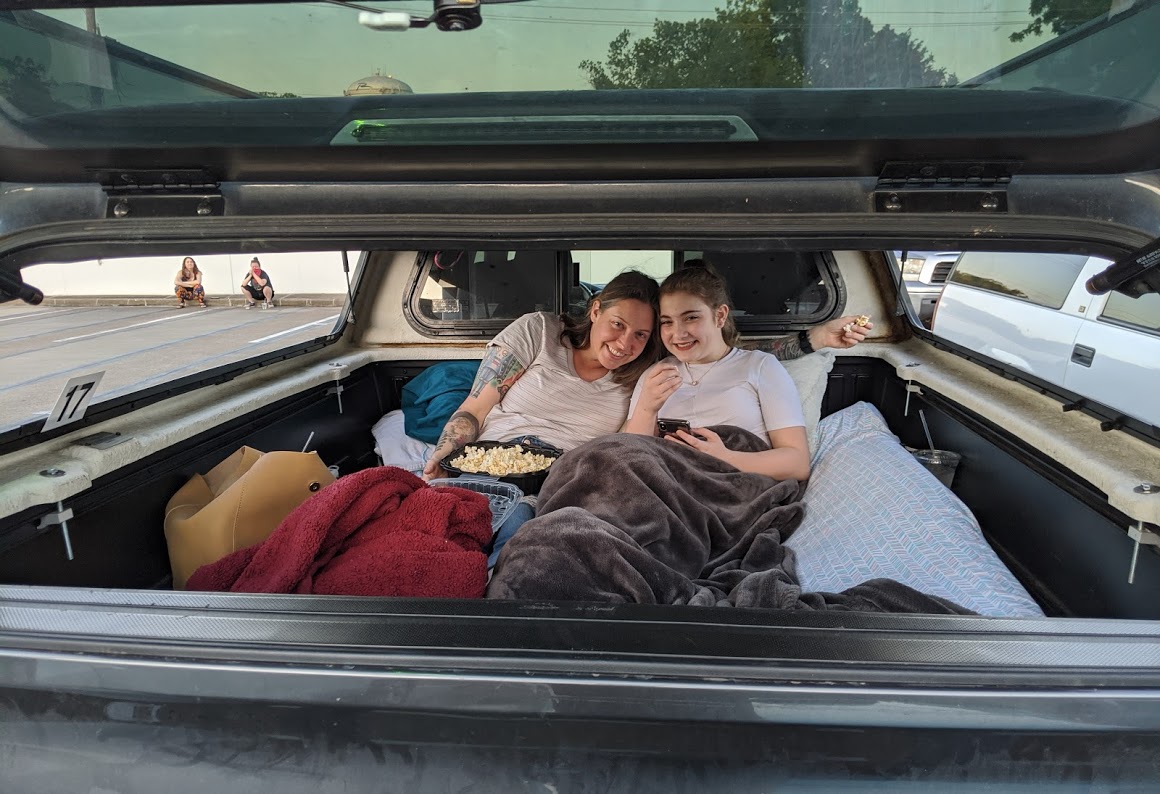 Stacey Potter Jemison and her daughter Mila in the back of mom’s pickup – armed with a lot of popcorn. Photo: Reid Robinson

Amir Omar is the former Richardson city councilmember and currently a vice-president at HydroPoint. He also saw Robinson’s Facebook invitation, but his girlfriend was one step ahead of him.

“She’d already RSVP’d and was very excited to get out and do something unique and fun. This was in those early weeks,” he recalls, “when the lockdown felt stronger. Reid has always had really creative ideas when it comes to promoting things. And supporting small business has been something I think a lot of us have been trying to do at this time.”

The new state guidelines this week reopening bars and permitting restaurants to admit more diners haven’t changed Robinson’s aim to continue CarBaret through the summer. After all, live performance venues are still closed, this thing is definitely different and his musician friends still aren’t working.

Besides, Robinson admits he’s having fun. He’s a bit of a showman.

The P. T. Barnum of the pop-up drive-in.