Skip Navigation
Home > ArtandSeek.net > Another One Of Artist James Turrell’s ‘Skyspaces’ Is Being Visually Contaminated 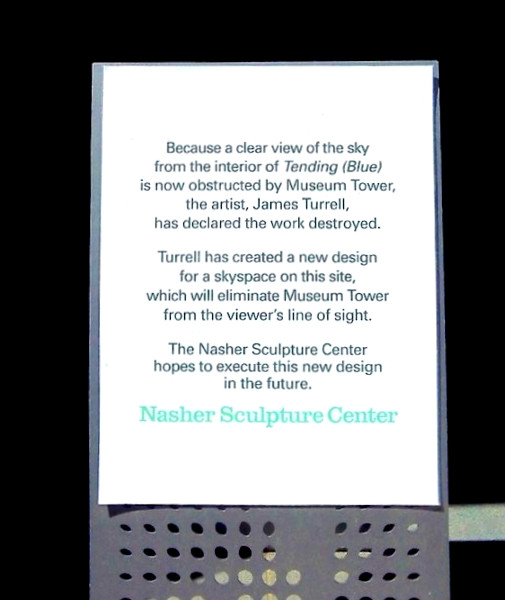 You may recall that one undeniable piece of damage that Museum Tower has caused the Nasher Sculpture Center – not the reflected sunlight that’s allegedly still scorching the garden, nor the glare that allegedly can ruin artworks on the museum’s walls by shining through the center’s unique, mesh-like ceiling. No, the Museum Tower’s owners have either denied such damaging effects or have offered solutions that require the Nasher to change, not the Tower.

Rather, the one undeniable effect the Museum Tower has had on the Nasher is that it caused artist James Turrell to declare ‘Tending (Blue)’ – one of his ‘Skyspace’ series owned by the Nasher — to be officially ‘destroyed.‘

‘Tending’ was an open-roofed installation in the back of the Nasher’s garden that afforded a museumgoer a clear, framed square of pure Texas sky – until the 42-story Tower intruded on the view. The museum closed ‘Tending’ — and put up a sign stating that Turrell was designing a new ‘Skyspace’ work to be installed there, presumably one designed to avoid visual contamination from Museum Tower. The new work has yet to appear. 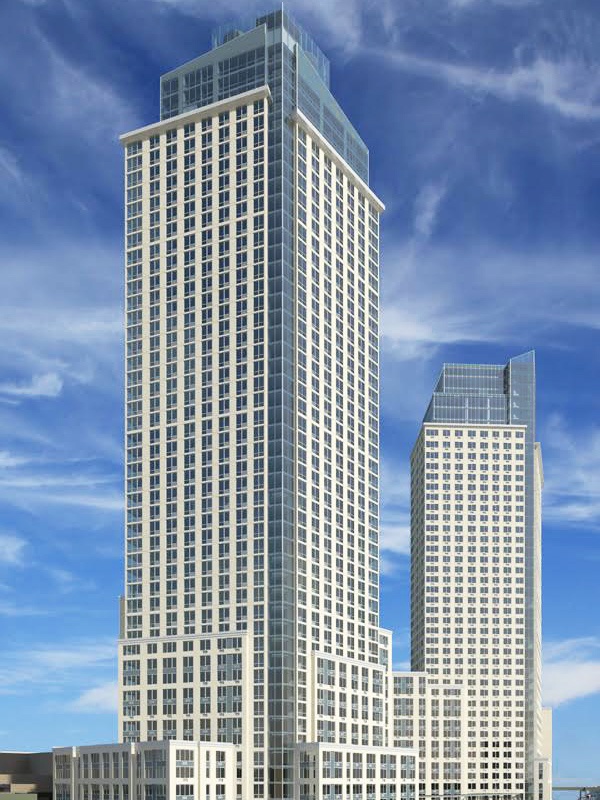 Well, now Dallasites can take pride in being trendsetters. We are now the first city to ruin a Turrell work: We even beat New York. According to the Gothamist, ‘Meeting’ — a Turrell ‘Skyspace’ work housed in MoMA PS1 on Long Island City – no longer blesses Manhattanites with a rare piece of unobscured sky. The scaffolding for two already controversial, residential buildings called 5Pointz (left) going up at 22-44 Jackson Avenue is now peeking into the overhead view provided by ‘Meeting.’ The two “gargantuan” buildings will eventually rise to 41 and 48 stories, respectively, making them the “largest new addition to the Long Island City residential market.”  No response yet, the Gothamist reports, from Turrell’s team on whether he’ll also close this work.

Two things can be said in favor of 5Pointz over Museum Tower. First, the twin buildings have brought home to America’s arts capitol the entire issue of museums owning air rights to protect such environmental works, so perhaps the issue will now be, well, thoroughly aired.

And second, unlike the emphatically upmarket Museum Tower, 5Pointz will have among its 1,115 units, 223 apartments that will actually be affordable.