Skip Navigation
Home > ArtandSeek.net > Anxiety And Joy: What Showtimes Look Like Around Dallas – After A Year of COVID

Editor’s note: Reconnecting after a year of separation and loss is a work-in-progress. KERA and The Dallas Morning News are collaborating to document how the pandemic has changed the arts and culture scene in North Texas.

It’s a Friday night at Artstillery, the experimental performing arts venue in West Dallas, and Sara Cardona, executive director of Teatro Dallas, takes the stage to cheers. She looks out at the 50 theatergoers and can’t help but exclaim, “We’re all together!”

This May 28 cabaret show from Teatro was the last in a series of open-air performances. It featured Indian classical dance and Dallas singer-songwriter Carleigh Reese, who goes by HONIN, with her band. Masks were required and meals from a vegan restaurant were pre-packaged, but the mood was jubilant.

The people here are ready for this reunion, ready for the joy of experiencing a live show together — like in the before times. Who’s not here may also be telling: Although COVID vaccinations rates are rising, many still don’t feel safe enough to be in a crowd. The result is a patchwork quilt. Arts groups are trying to re-open as both performers and patrons figure out the protocols for this strange new return season in North Texas. 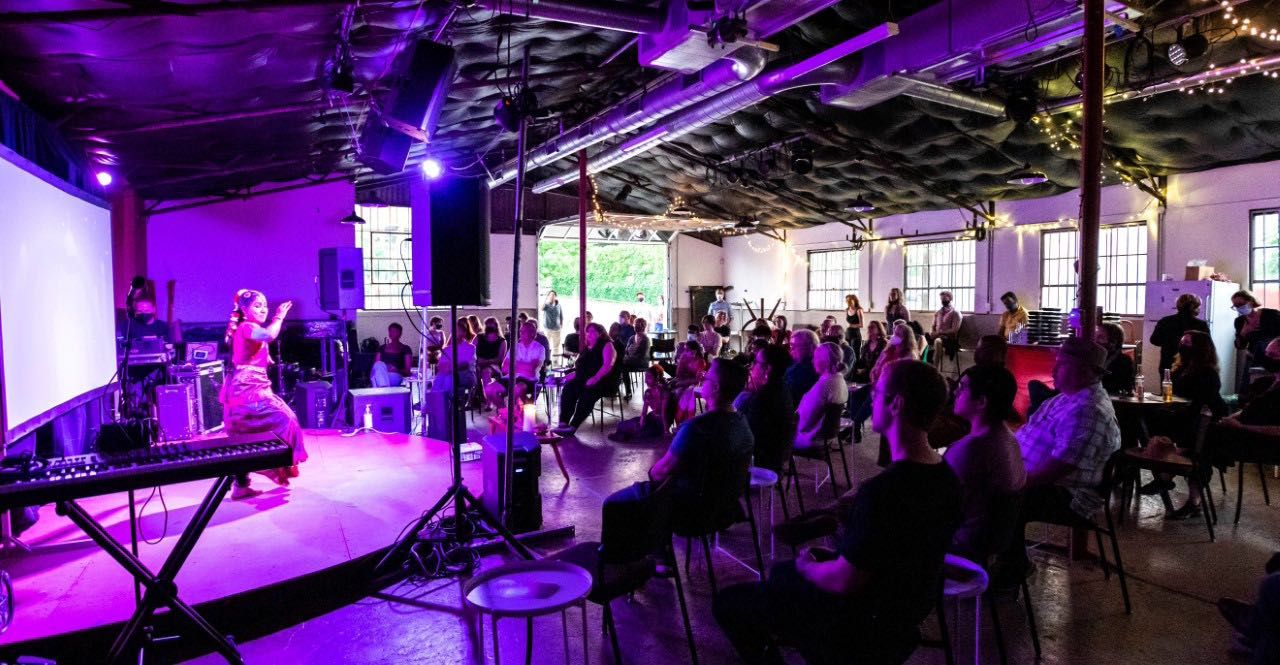 Krithika Shankursubramanian performs as part of Teatro Dallas’ ‘Desmodernidad.’ The cabaret event was held at Artstillery, an experimental performing arts venue in West Dallas. It was planned as an outdoor event but was moved indoors due to weather. Photo: Ben Torres

Teatro serves audiences outside the downtown Arts District. So performing in unconventional spaces in different neighborhoods to reach audiences isn’t new for the company — with or without the pandemic.

Historically, Cardona said, the company has done “guerilla theater that has come out of Latinx communities, you know, on the back of pickup trucks. So, we’ve presented in taquerias, restaurants and parks.”

When audience members were asked what factors led them to see Teatro in person, many cited the same things: the theater’s precautions and their own COVID shots. “We got our vaccines, so we were comfortable coming out,” said Oak Cliff resident Lisa Bailey.

Andrew Scott was also at Teatro’s show. He lives near downtown Dallas, and he salutes these efforts to preserve live performing arts. 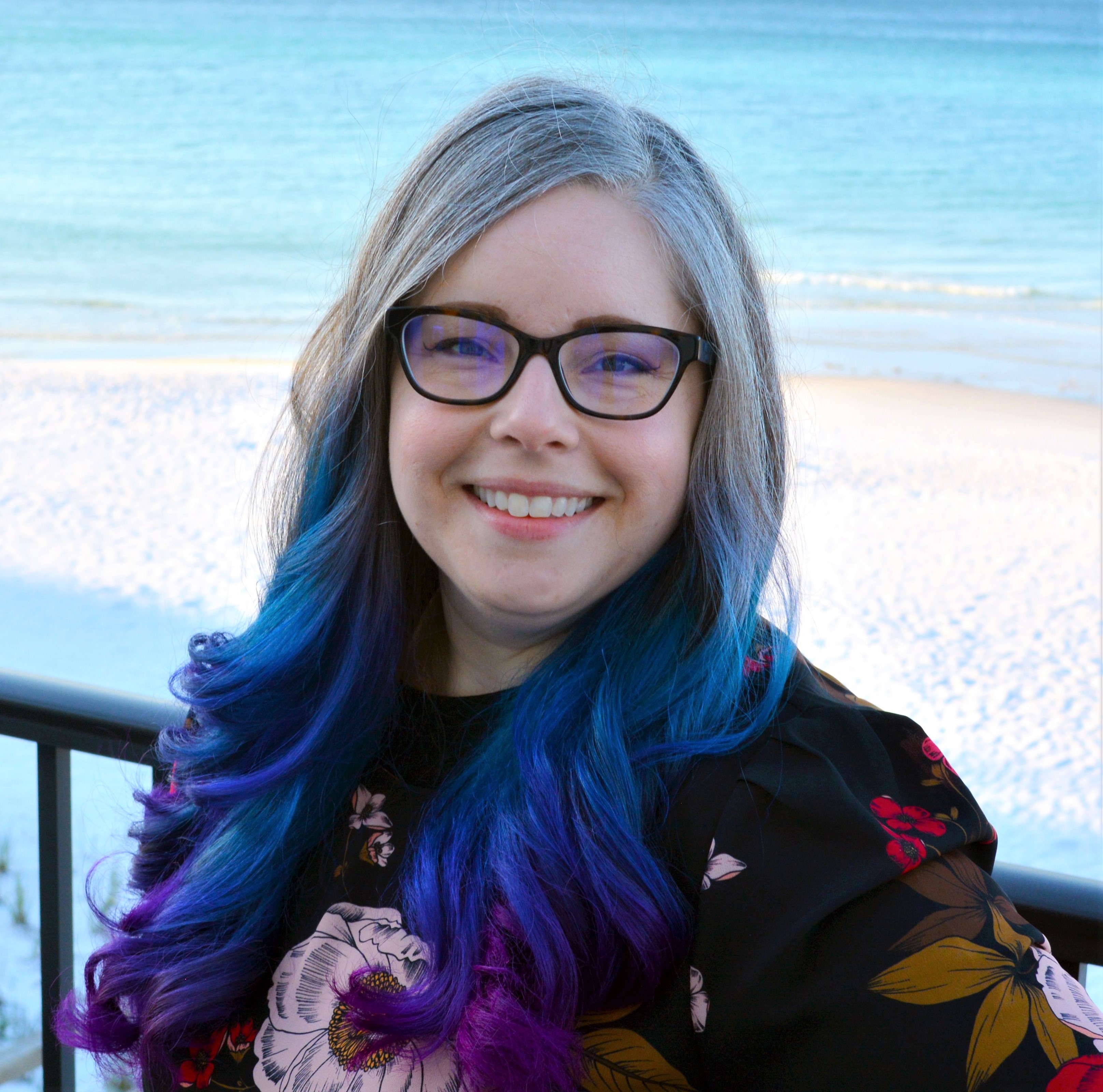 “The arts really stepped it up during this time,” he said. “They came up with ways for people to come and experience culture. We gotta thank them for that.”

Talk shows and commercials have been promoting the pandemic’s hoped-for end – along with our eager return to other in-person experiences.

But such enthusiasm isn’t shared by all. Many people in North Texas are cautious, for good reason: More than 40 percent of all Texans have not yet received a single COVID shot.

“I’m not really looking forward to going back to events at all this year,” said Lorie Whitaker, an arts enthusiast from Irving who got her COVID vaccinations in January. “Until we can get our local vaccine numbers up much higher, I’m very hesitant.”

She’s one of more than 300 people who responded to a KERA and Dallas Morning News survey about the arts scene in North Texas. Since the pandemic began, Whitaker has enjoyed watching online programming — including theater productions, literature readings and music performances — from the comfort of her home.

“I can fix some dinner, and then I can sit down and listen or watch a performance. And maybe I can knit at the same time, or maybe I have to pause it because my cat’s crying,” she said. “It’s nice that it’s there for me at my level, where I don’t have to put anything else on hold in order to enjoy it.”

Moving programs online, Whitaker said, has allowed more people access to events they didn’t know about before, or weren’t able to attend. So she hopes arts groups can maintain a good balance between in-person and online offerings.

One group that has struck this balance during the pandemic is the Dallas Symphony Orchestra. The DSO was one of the first professional orchestras to return to live performances last fall. In addition to adopting mask and COVID-testing protocols, the DSO performed with a reduced orchestra for a reduced audience.

Those precautions didn’t prevent a guest conductor from testing positive for the virus and a few concerts getting cancelled. Still, the orchestra considers the season a success.

The DSO’s classical season is now over, so the group is planning for the fall. The organization aims to give performances with its full orchestra for full seating capacity. Masks will be optional.

“I expect there to be some hesitancy from people until they see what’s happening,” said Kim Noltemy, president and CEO of the DSO. “But I presume if all goes well, people will return to their normal habits.”

Katie Barron, a longtime DSO subscriber, didn’t attend any DSO performances this year out of caution. But now that most of her family is vaccinated, she’s looking forward to going to concerts again with her husband in the fall.

“We haven’t been dating much lately because we’ve been stuck at home,” said Barron, who sings soprano in an area church choir. “And that’s one of the reasons we go. It’s a guaranteed date. We go out to dinner, oftentimes we eat at the restaurant at the Meyerson — we know the chef there. And we like the whole experience.”

The Mesquite Symphony Orchestra, which is made up almost entirely of volunteers, performed a few live concerts this year, with safety measures in place. The orchestra also plans on returning to full forces in the fall and is considering whether to require masks at rehearsals and concerts, according to its music director, Felix Torres. 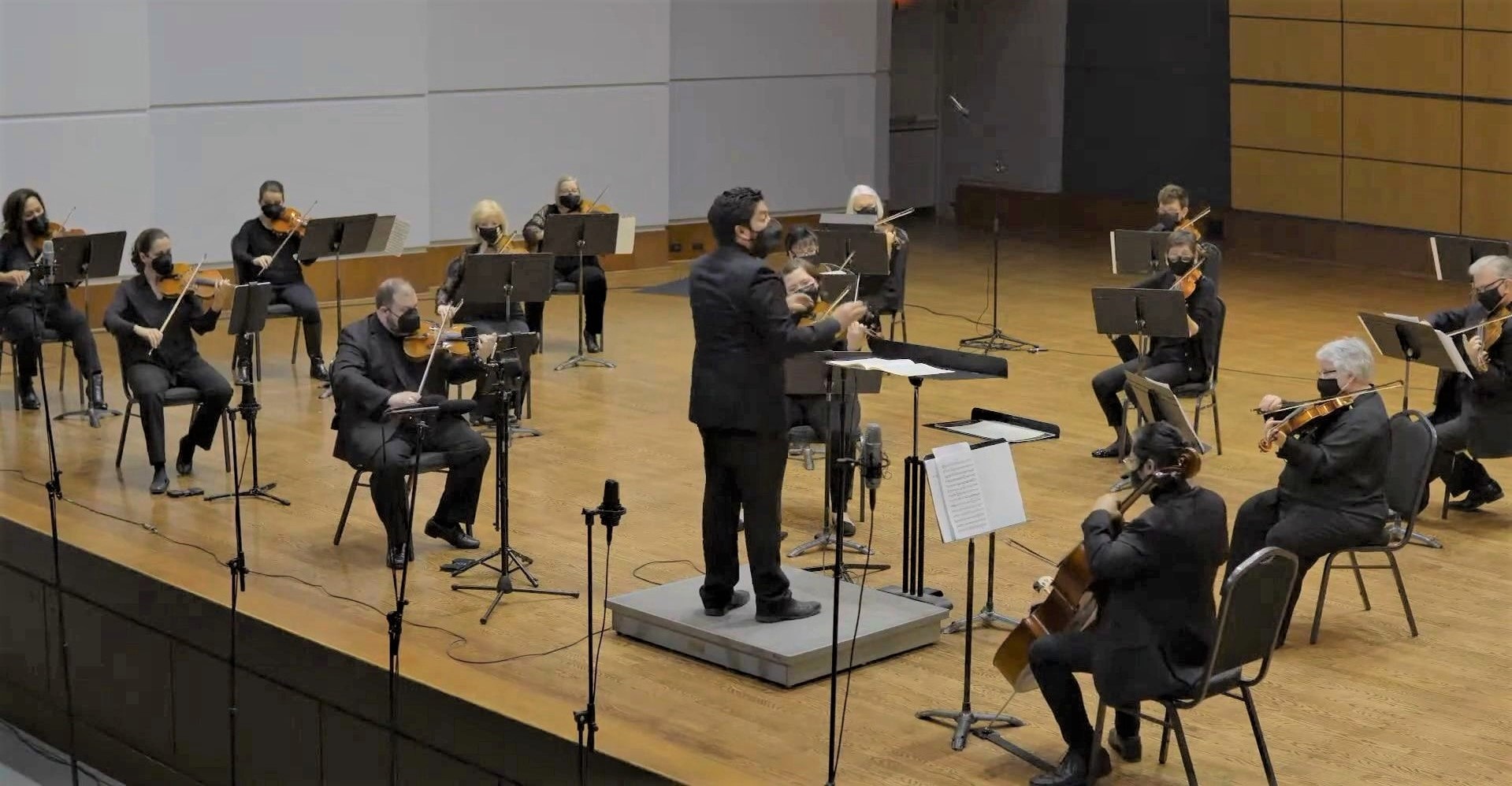 Music director Felix Torres leads string players from the Mesquite Symphony Orchestra in a performance of Tchaikovsky’s ‘Serenade for Strings’ on March 20 in the Mesquite Arts Center. Submitted photo.

Torres is worried about a potential resurgence in COVID cases. Unlike the Dallas and Fort Worth symphonies, which rehearse several times during the week of their concerts, the Mesquite Symphony rehearses over about a six-week period before its performances. That means if a Mesquite concert is canceled because of health concerns, those six weeks may have been for naught.

It’d be especially detrimental to the orchestra if its holiday concerts are called off. Torres said those bring in the group’s largest source of ticket revenue.

“I almost cried at the end of our concert simply because we were getting to do this again,” said Skidmore, whose 16-year-old daughter, Willow, also plays in the first violin section. “Sometimes we settle into habits and routines, and it can begin to feel mundane … And now it has a deeper significance to me — that this is something I get to do, and how grateful I am for it.”

“This entire show that we’re doing is about connections,” Igneczi said before the final dress rehearsal at the Coppell Senior Center. “It’s about creating those relationships in a way that is meaningful and provides hope.”

Theatre Three is taking The Music Man to three different outdoor locations around Dallas. In effect, the company is catching up to what Teatro Dallas has been doing — touring to venues in different neighborhoods. This may just be part of a new reality at Theatre Three, and a way to connect with a wider audience. 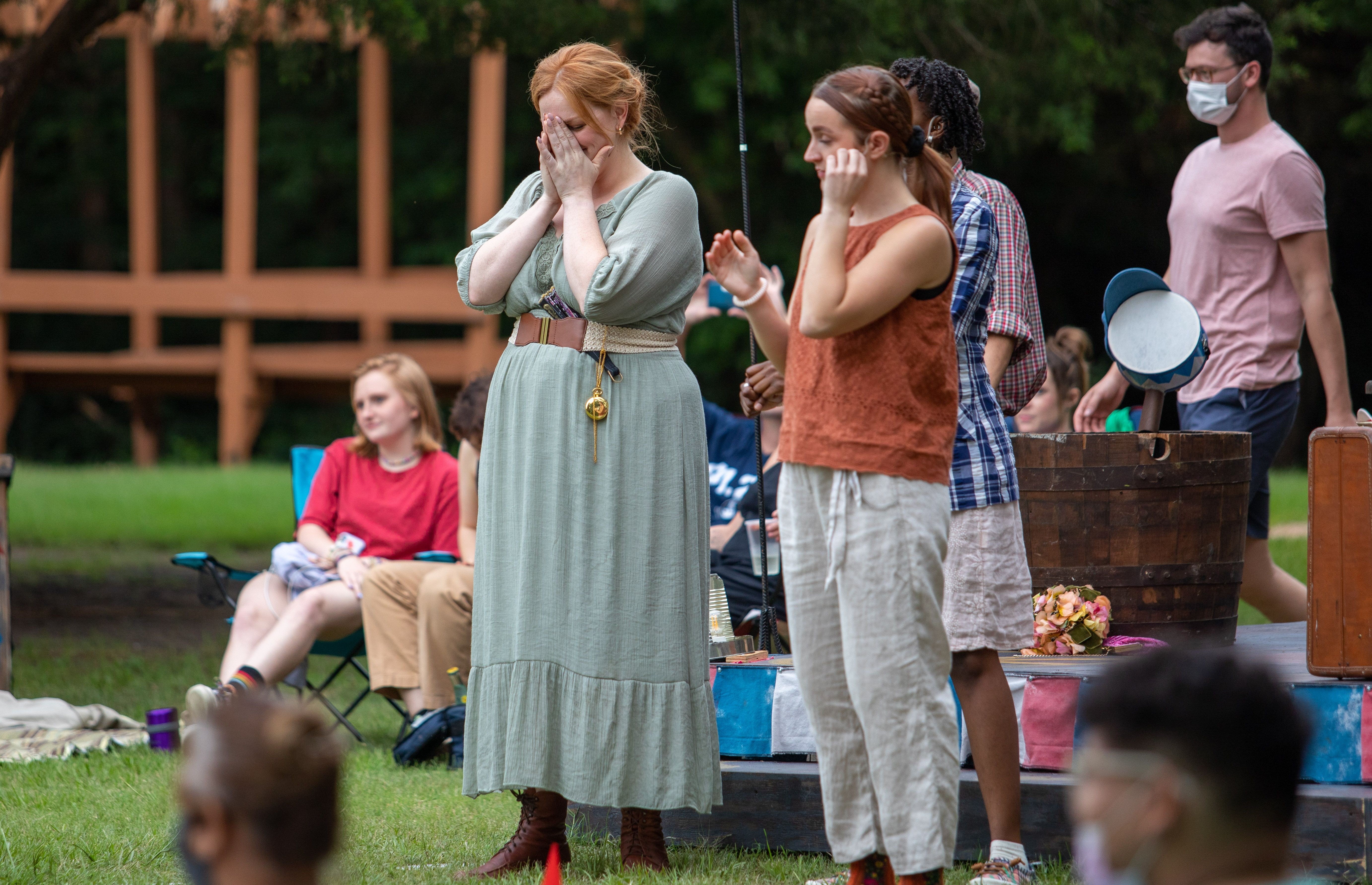 Kathryn Taylor Rose, an actress in Theatre Three’s production of “The Music Man,” gets emotional after Jeffrey Schmidt, the artistic director, welcomes the audience to the first live theater performance in more than a year. Photo: Keren Carrión/KERA

But questions linger for all arts groups. Now that many people have enjoyed watching local shows on their video screens at home, will they come back in person? How safe will performances need to be before the cautious are willing to return? And can taking shows outdoors or to different neighborhoods generate new audiences?

The DSO will learn more about what its future holds when single tickets go on sale July 12 — to the general public.

“I think that will be a very telling moment,” Noltemy said. “That’ll really indicate what kind of risks people are willing to take in the fall.”

Tim Diovanni is reporting on classical music at The Dallas Morning News in a fellowship supported in part by the Rubin Institute for Music Criticism, the San Francisco Conservatory of Music and the Ann and Gordon Getty Foundation.

Keren Carrión is a corps member with Report For America, a national service program that places journalists into local newsrooms.