Arabic is one of the hardest languages for English speakers to learn: vowels are mostly absent from the written language, there are more than a few different dialects spoken across the world — and the Arabic taught in a classroom barely resembles the one you hear on the streets. Zora O’Neill learned that the hard way.

Zora O’Neill speaks about ”All Strangers Are Kin” at The Wild Detectives, Thursday, 7:30 p.m.

O’Neill is the author of “All Strangers Are Kin,” a travel memoir about her 2011 tour through the streets of Egypt, the UAE, Lebanon and Morocco. She’s also a fluent Arabic speaker, but there was a time when speaking the language with locals felt nearly impossible, despite the years she had spent studying it. 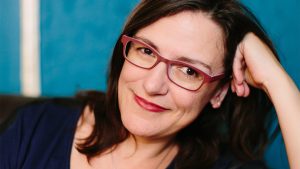 She traveled to Egypt for the first time after two years of classes in formal Arabic, recognizable by all but rarely spoken, except on the news and by politicians. That was in the pre-9/11 era, before interest in the language spurred growth in Arabic departments across the nation. She discovered that in the colloquial Egyptian dialect all the complex grammatical rules of formal Arabic she had learned just disappeared, leaving her lost in a sea of Egyptian words and expressions.

“Then I got to grad school,” she says, “and things got nerdier and nerdier, and bookier and bookier, and by the time I got back to Egypt, I was lost.”

She returned to Egypt for her last year of graduate school, but after that, her Arabic fell to the wayside until the international attention to the Arab world in the 21st century inspired her to pick it up again. But this time, she wanted to learn how to actually talk to people. So she took off, armed with a dictionary and a sense of humor.

This time, she focused entirely on the colloquial dialects, learning to tell jokes and make friends with locals. 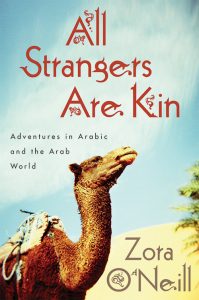 “When you go to the Middle East, you’re met with this overwhelming graciousness,” she says. She describes new friends across the region who invited her into their lives and went out of their way for her — “Of course you can’t take a taxi!” — including one from Morocco named Houria. Joking around with the young woman, just hours after meeting her, was a realization of O’Neill’s goal to create meaningful connections with Arabic speakers.

Now that she’s back in the United States, traveling the country to talk about “All Strangers Are Kin,” she’s having a hard time shaking the habits that she learned in the Middle East. She says that the “sure, whatever!” attitude she developed in that journey is working its way into this one, as she meets up with people she doesn’t know well and says yes to road trips. Along the way, she has seen people come out of the woodwork, with hospitality that actually reminds her of the Middle Easterners that she met.

The most recent place she interacted with native Arabic speakers, though? Lesbos, Greece.

Visiting the island last summer, O’Neill found herself in the middle of an emerging refugee crisis. At that time, she says, the situation was disorganized and chaotic. Noticing a lack of information, she started printing out information packets, maps and phrase lists for refugees and volunteers. Between her Arabic, her knowledge of Lesbos and her day job writing guide books, she was uniquely positioned to fill a hole in the crisis. When she got home, she created what essentially served as a guide book for volunteers on Lesbos.

“I’ve been freelancing for so long,” she says, “and it turns out all the weird stuff I know all works together!”

She had traveled to Syria three times before visiting Lesbos that summer, and she befriended refugees in Lesbos, so the continuing refugee crisis hits close to home for her. She’s worried that as the furor calms down, and the crisis becomes less immediate, the original relief effort organizers will begin to feel burned out and fewer volunteers will fill their places. For her own part, the book tour has forced her to take a break from thinking about her role in the situation. She thinks it’s even more important now to continue to write about gossip and humor and the everyday experience of the Arab world.

“The ideal writing about the refugee situation and the Middle East, to me, shows how people deal with even the worst situations in a super relatable way,” she says. “You can tell the really depressing and violent stuff, but it’s not the whole story. You want to show what great individuals there are living in these situations and how they’re managing.”