Intangible: The Fiber Fairy Tale is finally open at the Sweet Tooth Hotel. And by finally, we mean the exhibit featuring the fiber and textile art of six female artists was a long time coming.

The show was supposed to open April 18, but COVID-19 delayed that date until June 6. Then the show was held off another five days because of the curfew in Victory Park. But, as it turned out, the postponement wasn’t all bad.

‘Intangible: A Fiber Fairytale is on view at the Sweet Tooth Hotel through June 2021.

“Everyone created their concepts a year ago and they have been working on them ever since. I think the show is is actually even bigger than it would have been because everybody just continued to work over the extra 3 months,” said Sweet Tooth Hotel Founder Jencey Keeton.

And big it is. More than 2 million feet of yard donated by the Craft Yarn Council was used to create the exhibit. Guests can explore 11 installations of colorful and immersive art made exclusively from fiber and textiles.

Here’s more about the all-female cast. 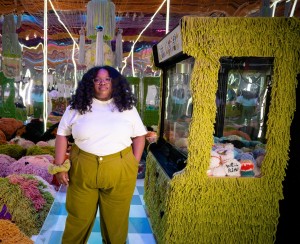 Dallas-based fiber artist and illustrator Niki Dionne has created an install that is a claw machine inside a claw machine. She’s created different pompoms inside the machine as well as massive pompoms outside of the machine. Her statement on the install is how the system is rigged against women of color similar to the claw machine. You can rig them so people can never win. 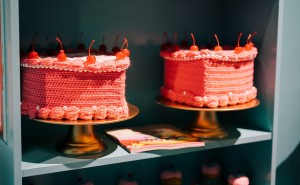 Twinkie Chan, from San Francisco, is known as a crochet chef. She has created an imaginary bakery known as Sucre Fleuf!– a take on “Sacré Bleu!” an exclamation of surprise or delight. “Sucre” means “sugar.” “Fleuf” is made-up and a reference to the fluff on a cake. 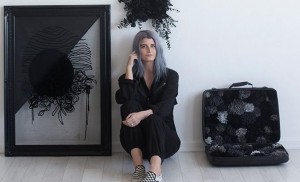 Dallas-base monochromatic muralist Alli K is the  only non-fiber artist in the exhibit.  She’s created a traditional hotel room. The idea behind Sweet Tooth Hotel is that guests can check in to view the art that is “spending the night” with us. “Alli K stayed true to our original vision by taking over one of the featured gallery spaces to create her version of an Alli K Hotel Room featuring her well known floral murals which incorporate cross stitch yarn and real life florals which fill the space.” says Keeton 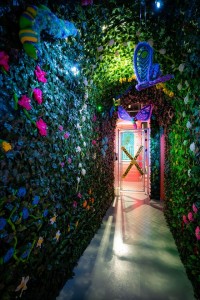 Ackerman’s work goes back to 2011 and the International Yarn Bomb Movement, when she began placing her first ‘street bombs’ of skirts on street signs and sweaters on fire hydrants. Enchanted Passage is filled with life-sized knit and crochet flowers ranging from hydrangeas to poppies, daffodils to wisteria. There are also a few extra large friends to greet you along your journey through the passage. along your metamorphosis journey between caterpillar and butterfly.

London Kaye is a Los Angeles-based street artist. She’s created crocheted works in cities and recently installed a piece honoring George Floyd outside the White House. She has an eclectic room inspired by the spirit of New York City with soft graffiti, puddling yarn pipes and a real mailbox perfect for love letters. She also has an underwater space illustrated with yarn sea creatures and sea weed line the walls. 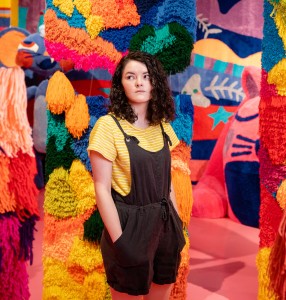 Lawrence is a fiber artist and recent graduate of the University of North Texas’ Fibers program. Her large scale installations are meant to feel overpowering yet intimate. Under the name “Forest Fibers,” Lawrence works with multiple fiber processes including weaving, latch hook, embroidery, crochet, and knitting. Her work focuses on themes of space and personal environments, shifting from representative to abstract. 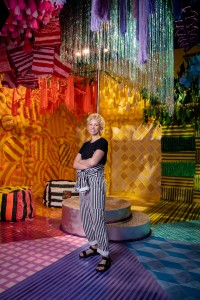 Dallas-based multidisciplinary fine artist Sydnor has the largest install in the exhibit. Her work, “Temporal Jungle,” is  tongue-in-cheek  as it plays with recognizable and nostalgic objects like a baseball hoop juxtaposed with sexual innuendos and adult content like a stripper pole. It’s the duality of childhood verses adulthood. 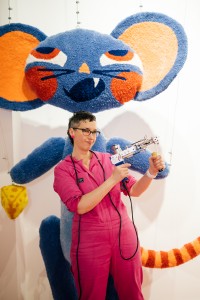 Busekrus has a background in graphic arts and has been working in fibers, but this is her first large scale fiber installation. The install features a giant 7-foot hand-tufted cat and other three dimensional characters that share his space. The install is called So Cozy because it’s supposed to be what a cat would dream about when it’s asleep–including a larger-than-life mouse.