Saturday’s protests in Dallas began peacefully but then spread across downtown, with some vandals going into the Arts District and breaking windows on four museums. Three of the museums that were damaged — the Nasher Sculpture Center, the Dallas Museum of Art and the Crow Museum of Asian Art — face each other along three blocks of Flora Street.

Four blocks away, and across Woodall Rogers Freeway, the Perot Museum of Nature and Science also had some of its first-floor windows shattered. 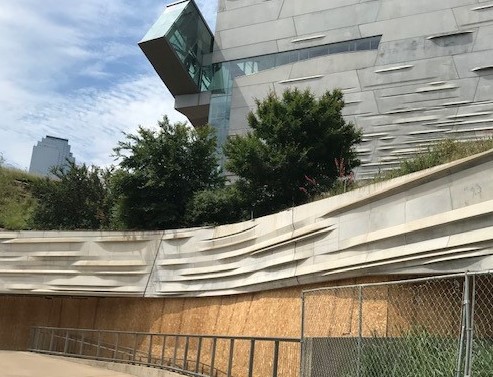 The Perot Museum of Nature and Science’s street-level windows along Field Street. Most of the plywood that’s up now on the museums – and any fencing – is mostly protective. They don’t necessarily indicate broken windows. Photos: Jerome Weeks

It might almost seem as if the museums were targeted.

But the way the Arts District is laid out, the three museums on Flora – and the Perot – are all south of Pearl Street. Meanwhile, the district’s performance venues are all north of it. Evidently, the crowd headed north and stopped at Pearl: No windows north of Pearl were broken — whether they were fronting restaurants, office towers or arts facilities. And no other damage – graffiti, for instance — is apparent either.

The side entrance to the Dallas Museum of Art’s sculpture garden along Harwood Street — it’s a metal gate, so the plywood is here now for protection.

In many cases, the four museums also have an immediate, accessible, sidewalk-level presence — with the Nasher, the Perot and the Crow, especially, presenting long walls of glass.

In fact, the Crow may have suffered the most damage. Amy Lewis Hofland, executive director of the Crow Museum, believes all the broken glass may have happened because the vandals didn’t even known they were in a museum. It seems they were attracted by the window displays of the museum’s gift shop – called the Lotus.

“We did have some theft in the Lotus shop,” Hofland says. “I would say we also had quite a bit of damage to products, probably coming from the chairs that were thrown through the window onto the display of ceramics.” 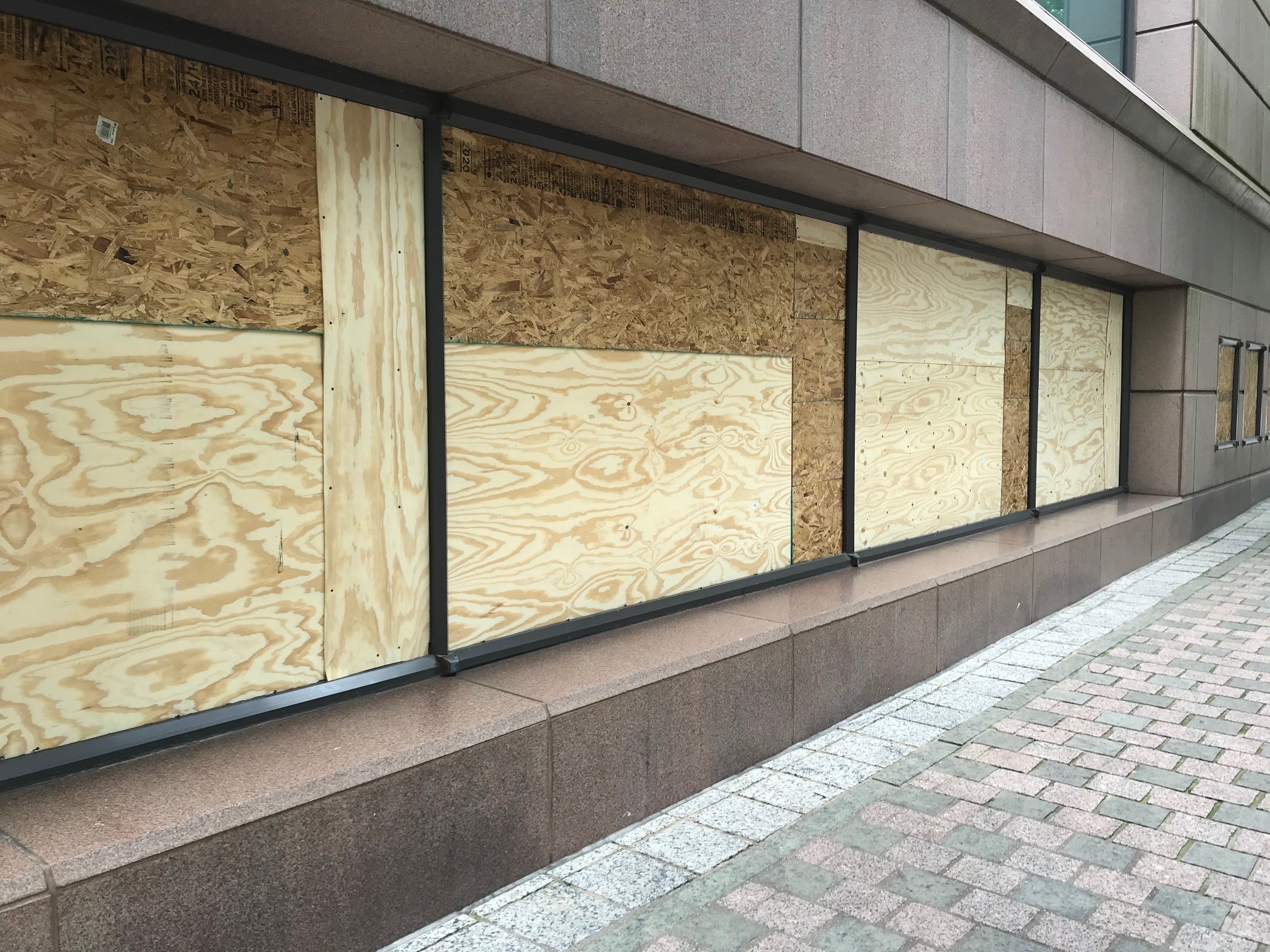 Having viewed the security camera footage, Hofland says the vandals were in and out in less than a minute — because of the arrival of Trammel Crow Center security personnel.

Jill Magnuson, vice president of external affairs for the Nasher, agrees that the Crow probably suffered the most damage late Saturday evening. The Nasher also has a museum gift shop out front, but Magnuson says, the museum administration took the precaution earlier on Saturday to lower the security blinds all across the entrance front. As a result, the gift shop wasn’t visible — neither was most of the art.

“Thankfully,” Magnuson says, “we suffered some graffiti and some minor window damage.”

The Nasher Sculpture Center’s front entrance with its security blinds in place.

No museum has reported any loss to its collections. All the museums continue to evaluate how and when they might reopen.