We were walking up the car ramp inside the Dal Park Parking Garage, across from Neiman-Marcus on Commerce Street. Felicella is also the executive producer of Aurora, the ‘festival of lights’ that’s been held in downtown Dallas since 2010. Area 3 is not the festival’s biennial event; it’s a special project from Aurora running October 1st to January 1st. Back in June, Aurora announced it was going to year-round programming, and this is part of that.

“Brand-new art experience in a brand-new world”: Basically, with Area 3, Aurora becomes the latest public art outfit to join the growing group of theaters, dance troupes, live musicians and pop-up movie screenings that have opted to re-wire their art forms to live with the pandemic’s social-distancing isolation.

And they all employ the American car to do it. But Aurora has also advanced a new revenue stratagem for participating artists as part of its efforts to help the financially strapped cultural community in North Texas — more about that, later.

Most of these audience-at-the-wheel art efforts have adapted the model of the drive-in movie or the car-hop food stand: Audiences remain safe in their cars and the art is brought to them.  But Area 3 is different — because Aurora seems to be one of the rare visual arts organization to let people essentially drive cars through 100,000 square feet of darkened art gallery. Instead of the drive-in movie, its model more closely resembles a drive-through car wash or one of those haunted house carnival rides where you stay in your toy car as it jostles past fluorescent ghosts and knife-wielding maniacs. 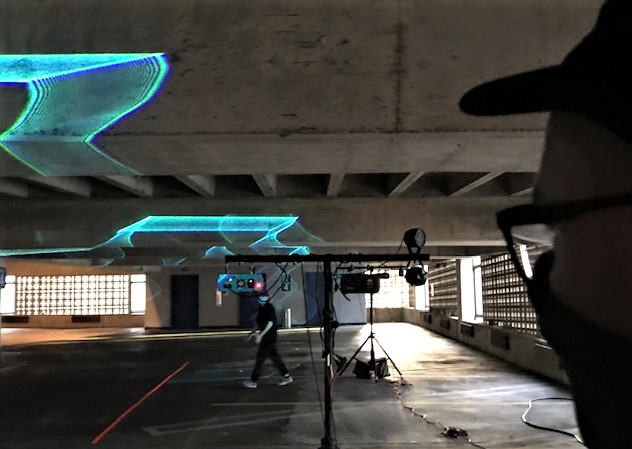 Yet where Aurora has truly made its name in Dallas is letting us wander around freely and gawk at giant, outdoor digital projections up the sides of tall buildings. And they’re here, just not outdoors nor up the side of a building. Area 3 is a tunnel that follows a set path. In the Dal Park Parking Garage, we drive up several flights to get to a long black wall with giant sliding doors: Visitors’ entrances to Area 3 will be timed so as to avoid traffic jams as the cars proceed through 16 installations and environments.

These include Zuyva Sevilla’s assemblage of more than 120 computer monitors that he’ll stack and line up on both sides of the path. Eric Trich and Taylor Cleveland’s CMD + COPY (digital mock-up above) resembles an automotive tour through somebody’s eye-popping, media-saturated neural cortex. Melanie Clemmons and Zak Loyd’s Laser Wash is a car wash analog but with a laser light-show in blue and pink. And for The Chamber, David Stout is using “generative animation” to project what he called “an archetypal moth made out of jeweled fractals in a kind of contemporary funerary chamber.”  The metaphor here is maybe we’ll eventually escape this pandemic-era, parking garage, death trap as a new life form.

When first approached about the whole garage setting with its car-honking difficulties and opportunities, Stout said, “All of us probably paused for moment. But some of the most interesting work that I’ve done in the last 20 years has been in odd places and not in museums. So,” he laughed, “I thought it sounded like a good time.”

Aurora has also offered different sorts of immersive experiences as well — interactive ones, playful installations, etc. Choreographer Danielle Georgiou, for instance, has developed a dance piece, PURITY BALL, for the garage. What Blake Weld has on offer is kind of a laundromat set on “destroy.” Weld typically uses motion in his art works — primarily mechanical or electric motion. His kinetic sculptures have included a dancing hand sander ballet and an ‘earthquake simulator’ made of a toaster and an electric fan attached to a rickety folding table. 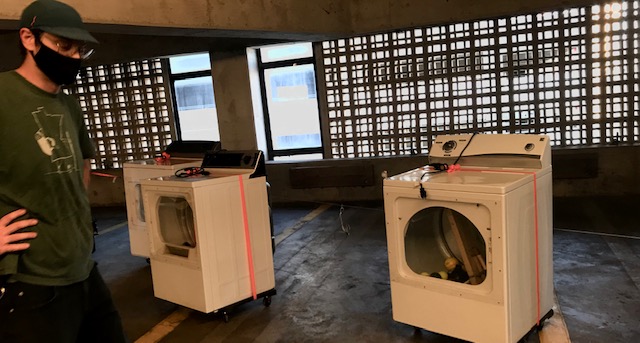 Ever since the first, large-scale kinetic sculptures were switched on (Jean Tinguely’s Homage to New York in 1960), artists have employed the insistent, repetitive, sometimes futile nature of mechanical movement to comment on industrialized society, our increasingly self-destructive, dehumanized nature, the soullessness of machines and computers, etc. As serious as those issues are, these rattletrap Warner Brothers cartoon machines also provide a great deal of humor. Frantic, purposeless motion often does (give any Acme product to a coyote and step back). When Homage to New York really got going at MOMA in New York, it was burning down. The fire department stepped in to put it out. The audience groaned.

For Area 3, Weld has ramped up the scale of his work with Dryers On The Fritz. He said he bought six ordinary laundry dryers on Craigslist, installed plexiglass doors on their fronts and then crammed them full of sports equipment, sticks and even ball peen hammers. As viewers drive up, a motion sensor will trigger the dryers, which will then start clanging and booming and lurching about — like a joke version of “the machines are coming to kill us.”

In something of a low-tech break for Denton artist Alicia Eggert, her work, The Future Comes From Behind Our Backs, is the first installation we’ll drive through at Area 3 — and it, too, explicitly takes inspiration from a car wash: We enter and exit the Dal Park more or less “cleansed.”  Eggert is best known for her use of sly, gnomic messages spelled out in big, blinking neon. This time, she’s put up six ribbon curtains one after the other — somewhat like the rubber ones that dangle down in car washes. Driving through these curtains will reveal a line of poetry on the next curtain — and the next. It’s her newest twist on text-based art: a kind of giant Burma Shave roadside jingle or what Print magazine has called “motion graphic art.” 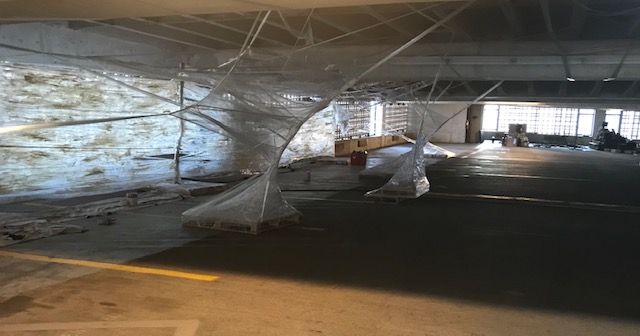 The beginning of the cerebral spider web for “CMD + COPY.” See video above. Photo: Jerome Weeks

All of this should certainly make Area 3 an unusual visual arts experience. But it also represents an innovative financial set-up for both Aurora and the participating artists.

“This is a profit-sharing model, a revenue share,” said executive producer Erica Felicella. “So everyone’s in it to win it. It’s more of a partnership this way — which we’ve never done before.”

Simply put, individual artists kick in their own costs for their artworks — and ultimately the box office take from the $30 entrance fees will be divvied up with them, the vendors and Aurora.

“I was not a huge fan going into it, frankly,” said Taylor Cleveland. “But I think the reward for it could be great.”

His partner, Eric Trich added, “I understand the reasoning behind it. In the time of COVID, it’s hard to have events, and this is a unique way for people to get to experience art. It’s also a way for artists to still get to create. I think the hardest part is being able to build out the install without money upfront. Outside of that, I think it’s going to work really well.”

Dallas, Texas (September 28, 2020) Dallas AURORA is pleased to announce an immersive exhibition titled Area 3, which will transform over 100,000 square feet of a parking garage in downtown Dallas. Separate from Dallas AURORA’s biennial program—which will be announced soon—Area 3 will function on a shared profit model in an experiment to support local artists and vendors whose income has been affected in the wake of COVID-19. Featuring works by sixteen regional artists, the exhibition will include large-scale light, video, and sound installations as well as performances which will be viewable from the safety of attendees’ own cars. Area 3 will take place in the Dal Park Parking Garage (1600 Commerce Street) from October 1, 2020–January 1, 2021. Timed tickets, which are $30 per car, can be purchased starting September 14 at dallasaurora.com.

With the onset of the COVID-19 pandemic, Dallas’s parking garages and the local art and culture industry have seen their business cut by over $68 million—with the artists themselves have been among the hardest hit with a tremendous amount of work opportunities lost. AURORA is addressing this financial loss with their Artist Relief Fund, which has been awarded to two artists thus far, with more rounds to be announced. For over ten years, AURORA has relied on the incredible event production industry in North Texas to put on their large-scale public art exhibitions. With the knowledge that the event industry has also been hit particularly hard by COVID-19, we are looking forward to collaborating with our partners once again on Area 3.

“We hope that Area 3 will give the public a glimmer of hope beyond their screens, and will provide our community with the opportunity to experience art and culture for the first time in over seven months,” says Joshua King, Executive Director of Dallas AURORA. “With the loss of work opportunities for the artistic community as well as the event industry—which we have relied on for so many of our initiatives—our sincerest hope is that Area 3 gives us a view into a new future together across industries.”

The Future Comes from Behind Our Backs

Dryers on the Fritz

Sacred City Plans: “There Are Other Worlds”

About AURORA
AURORA is a Dallas-based public arts organization at the intersection of art, technology and community that presents works by the most visionary artists of our time. A cornerstone of arts and culture in North Texas, AURORA aims to expand the future of art through a dialogue that engages the creative possibilities within ourselves and each other. Since its founding in 2010 by artists Shane Pennington and Joshua King, along with veteran Dallas arts supporter Veletta Forsythe Lill, the AURORA Biennial has attracted more than 170,000 visitors, and commissioned and presented over 300 local and international artists. It continues to expand its reach and impact, boasting a 5:1 return in economic impact to the city associated with the biennial event.

Through the initiative and support of the Dallas arts community, AURORA has expanded over the years from a small public arts organization to a multifaceted institution with the ability to give back to artists and creatives in the region.