Skip Navigation
Home > ArtandSeek.net > Born Into Classical Music – And Giving Back To Fort Worth 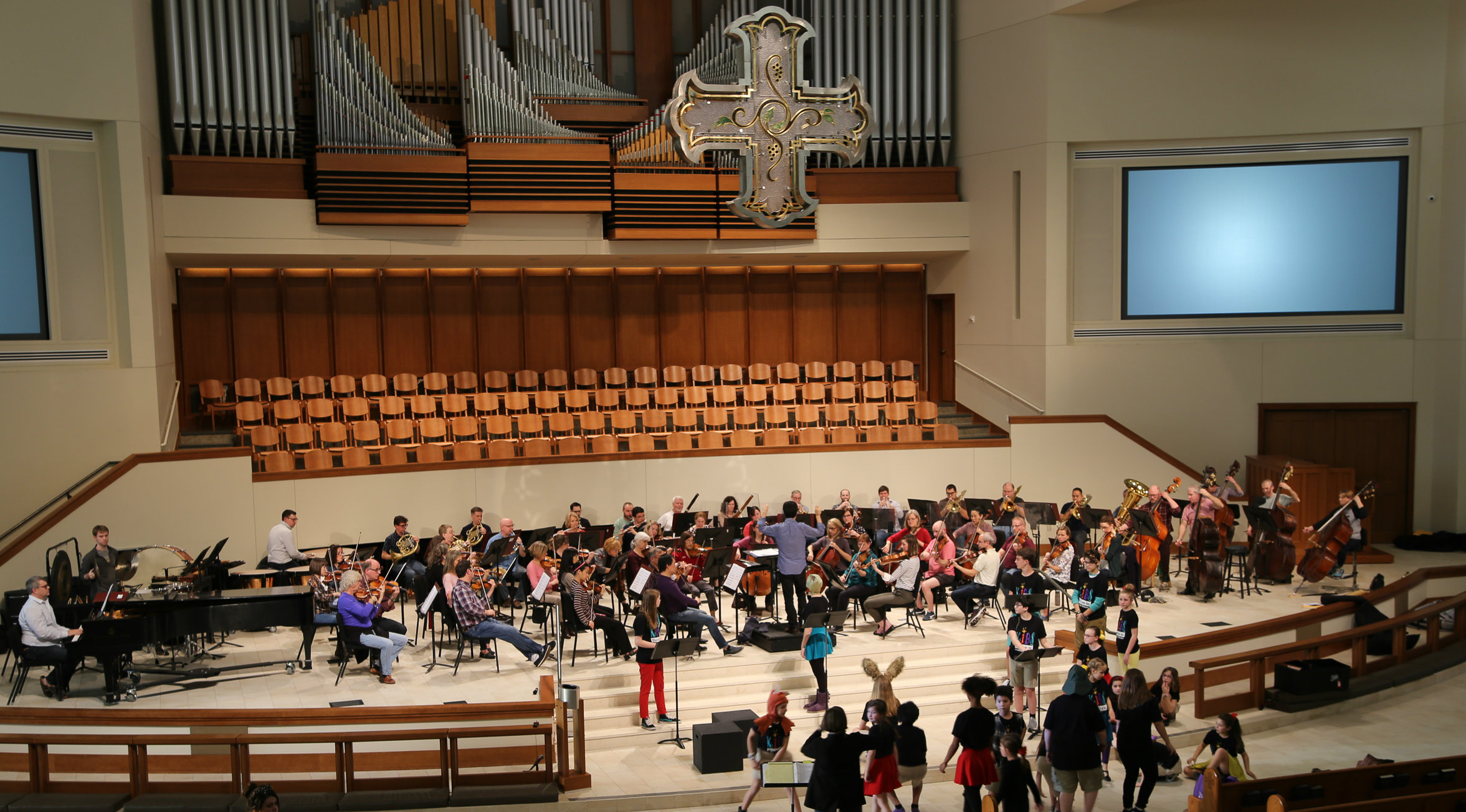 Alejandro Guillen is Fort Worth Symphony’s new, fresh-faced, associate conductor. Guillen’s young, but he comes from a long line of musicians. And he’s actually returning to Fort Worth. In this week’s Art&Seek Artist Spotlight we drop by a rehearsal and learn what it takes to start a career in classical music in 2018.

It’s Thursday evening at Arborlawn United Methodist Church, and a college student seems to be leading the Fort Worth Symphony Orchestra in rehearsal. It’s Alejandro Guillen. He’s a 33-year-old, slender associate conductor. But he could easily pass for twenty-three.

They’re rehearsing a children’s concert. The music is ‘Aesop’s Fables’ – inspired by the Prokofiev children’s classic, ‘Peter and the Wolf.’ Two dozen young performers from Kids Who Care, the musical theater education group, enact the stories. But the Arborlawn church is big and echo-y, so the actors have to be miked. And that’s thrown everything out of balance. 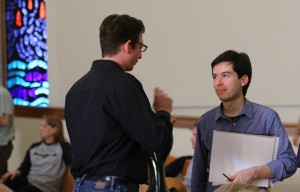 During a break, Guillen consults with technicians and the composer, TCU professor Till McIvor Meyn, about what can be done to deal with the reverberation.

“When we’re up here, the reverb is huge,” Guillen says. “Can they be brought down?”

This is the conductor’s first rehearsal at Arborlawn. It’s his first time conducting ‘Aesop’s Fables.’ But Meyn, the composer, has complete faith in him.

“Sometimes you’re just not prepared for the space changing the music,” Meyn says. “But he’s young. He has a lot of training as a string player. He’s very confident because he knows his stuff.” 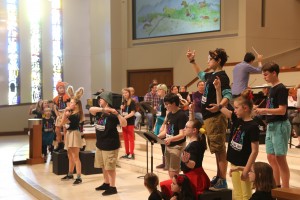 Kids Who Care rehearse in front of the FWSO.
Photo: Jerome Weeks

“We’re still tweaking things. And that’s what’s beautiful about it, every time you play a piece of music, it’s different,” he says.

Guillen knows his stuff. He’s the fourth generation in his family to pursue classical music. His grandfather co-founded the symphony in his hometown of Bogota, Colombia. Guillen was playing violin at 5. His father brought the family to Fort Worth in 2000 to pursue graduate music studies at TCU.

“You know, there was never this idea of music as a profession detached from music as a calling or music as a way of being alive,” say Guillen. “It was almost as if, what else would you do?”

But the family move meant, in the 10th grade, Guillen left lush, mountainous Bogota for flat, hot North Texas. It was a shock, he admits. As so often in his life – music helped. 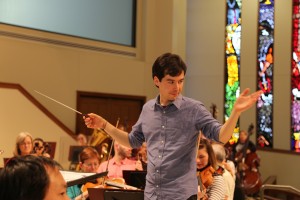 Guillen in his element, leading an orchestra.
Photo: Jerome Weeks

“I got off the plane and became the concertmaster with the Fort Worth Youth Orchestra,” Guillen says, “and so as long as I had that, I knew that I could belong.”

At TCU, Guillen got his bachelor’s in violin performance. Afterwards, he got doctorates in violin and conducting at the University of Colorado. Since then, Guillen’s toured Europe, he’s taught at universities and conducted orchestras. He’s also the music director of the Bloomington Symphony in Indiana. He owns a home there with his wife, Sarah, a baroque violinist and teacher.

With all that, why come back to Fort Worth – to be an associate conductor?

“Well, you know, I have to go back to my experience as a student at TCU. I associate being here in Fort Worth with learning, you know, with growing. So to return now as associate conductor, I think now it’s a time of giving back,” explains Guillen.

As associate conductor, Guillen works with outreach programs, with children’s programs, with trying to give young people a rich, initial exposure to a live symphonic performance.

But Guillen also admits he and his wife are still figuring out how to build careers . It’s an issue that bedevils many artists in America: There’s no corporate ladder to climb, no guidebook.

“I really feel privileged to do what I’m doing right now. And I don’t want to seem ungrateful,” he says. “But it’s hard to start to make a professional career.” Guillen says there are widely accepted traits that makes a good conductor. But there no formula for success, “this is not a linear process.”

So piecing things together is true even for an artist who was born to it. 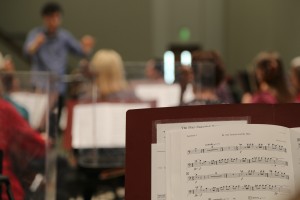 The question then becomes, is this struggle and training and talent worth it – for an art form that, honestly, many Americans still see as withering? Was Guillien born into an art that’s – an antique?

“I realize that I’m not objective because I’m in it, I love it, it’s my livelihood and my life,” he says. “But I really don’t think that people will stop coming. If we don’t invite them, and we make them feel they’re coming to this foreign thing, and it feels excluding – I do think we have to re-think that.”

Guillien says that’s happening. And he has a lot of faith that symphonic and classical music will live on. This Saturday at Bass Hall, Guillen will conduct a symphonic concert of music from the Harry Potter films – obviously aimed at young fans.

When did you decide this was going to be your profession? Not ‘I always liked music,’ but this was your career?

I do remember the conducting bug biting me probably at the beginning of college. In some ways, that’s a little later than for some people. I don’t recall a specific moment of deciding, “OK, when I grow up I want to … “

Having grown up in a family of musicians and artists, it’s interesting as I go back to find that moment, and it’s always there. So I’m very privileged to be able to do, as my profession, what I also love. There’s very little distinction.

So have you ever had to work a day job, another kind of job – in order to continue in music?

No. Can you believe that? I’ve been so fortunate. Everything so far has been being in an ensemble as a singer or a musician, or leading the ensemble, interacting with people in music-making. Of course, I’ve done a lot of volunteer things in different fields, and I have a few things I want to get better at. I love math. And in another life, maybe I could have done math – not necessarily sitting down and doing the formulas and equations but the thinking abstractly about it. 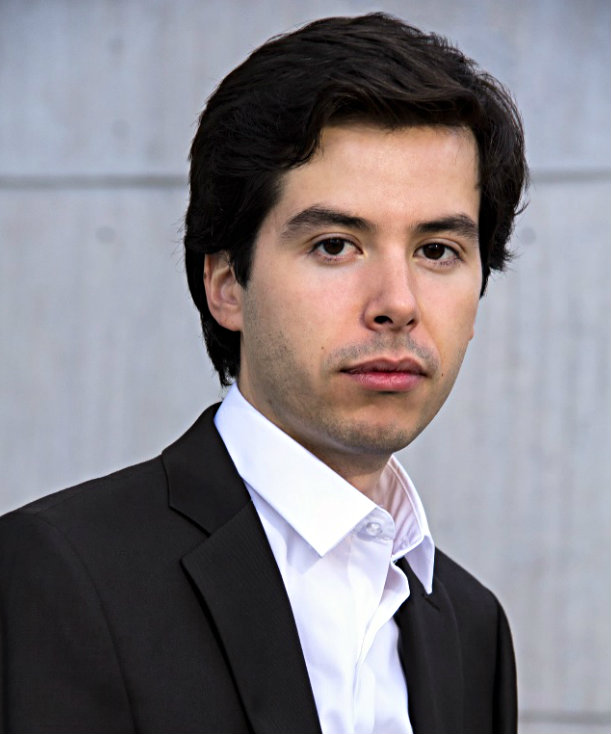 Working for two different orchestras across the country – orchestras that plan their schedules years in advance – and with your wife Sarah’s own schedule as well, as a performer and teacher, I realize the two-career couple has long been a commonplace in American life, but you must have an insane calendar.

We’re both in that early stages of making our careers as musicians. So yes, there’s this tremendous pressure of decisions, of becoming a soloist or an orchestral performer or a teacher. I admire her so much because she sees all of them as equally important.

She’s finishing her doctorate, so she’s investing most of her time in that, but she also plays in many professional groups, particularly in leading Bach cantatas – she’s the real pro when it comes to Baroque violin – and she’s also teaching, she teaches students at every level and she teaches in ways that make my mouth drop open.

The Fort Worth Symphony is in the rare position of having two Latin-American conductors. In the previous generation, it was Asians and Asian-American musicians, soloists like Yo-Yo Ma, who flooded the classical  scene. After Gustavo Dudamel (a Venezuelan) was such a hit in LA, we’ve seen an uptick in Latino musical directors, like Andres Orosco-Estrada in Houston, although those positions are still more than 90 percent Anglo. Do you feel a need to represent? To promote Latin-American music?

Yes, definitely. Recently, with the Bloomington Symphony, we collaborated in a concert with the IU [Indiana University] Latin American Music Center. Not only was all the music written by Latin-American composers, it didn’t necessarily sound ‘Latin.’ Sometimes, our music gets pegged as only ‘festive.’  I like to think what makes something sound Latin has more to do with interesting harmonic twists and rhythms and, of course, the influence of Amerindian and African music. Miguel Harth-Bedoya [music director of the Fort Worth Symphony] is working to legitimize our music and to publish it so more people have access to it. I think this is wonderful.

But do you ever feel like an antique – that you’re pursuing something that’s slowly fading from cultural significance? And bear in mind, this is a cultural journalist asking, so from one apparently dying species to another …

I realize that I’m not objective in saying this because I’m in it, I love it, it’s my livelihood and my life. But I really don’t think that people will stop coming.

If we don’t invite them, and we make them feel they’re coming to this foreign thing, where they can’t clap or they clap at the wrong time or, God forbid, they cough too much, and the entire experience is excluding, then I do think we have to re-think that. There is a stuffiness there that does have to change – and is changing. A lot of that goes back only to Wagner, you know, everyone having to dress up and sit in silence and pay strict attention. And Wagner is essentially modern, he’s not that long ago. That period of time [since Wagner] represents only a small portion of the entire classical tradition. So it needn’t be like that.

What would John Williams be without the movie scores of Erich Korngold?

Exactly. The Strausses and the Mahlers and the Bruckners of our day are doing it with movies. And so, overall? Music will always live, symphonic, classical – yeah.  [laughs] Hallelujah, forever!