Five years ago, a twenty-year-old woman made international headlines by becoming the police chief of a small Mexican town caught up the cartel drug wars. Her story has inspired a trilogy of dramas that’ll get their area premiere from the Undermain Theatre — the first trilogy the company has ever presented. KERA’s Jerome Weeks sat down with playwright Matthew Paul Olmos to talk about the first of his trilogy, called ‘so go the ghosts of mexico.”

Your play is based on a real person, Marisol Valles Garcia. Tell us about her.

MPOShe was called ‘the bravest woman in Mexico’ and that was because as a 20-year-old, she took over as police chief in a small town in Mexico, where the last chief had been beheaded for refusing to cooperate with the cartels.
‘so go the ghosts of mexico, part one: a brave woman in mexico’ at the Undermain Theatre Sept 17th through Oct. 8th.

So it’s a very fascinating story about this woman who puts herself in danger, and her real point was to take the firearms away from the police officers, hire more female officers and to say to the cartels, ‘We’re not trying to be a force against you. We’re trying to just have peacefulness and to have the community really focus on children going to school and families staying close together.”

And then not that long after, she ends up being contacted by the cartels and they threaten her and she flees to the US to try to get asylum — where she’s at now.

Other than her courage in doing this, what fascinated you about this story?

MPOIt’s when the political becomes personal. Her direct life was affected by what was going on in the country politically. I think it’s very easy to be in our own lives – even in our own country right now, it’s easy to sort of think, ‘Oh, that doesn’t affect me directly.’ But  think in her case, it’s right outside your door, so she actually had to take action.

There’s a famous line by Joan Didion, where she said that in Latin America, magic realism isn’t magic at all, it’s just realism. And I wonder about your play, the story alone, the bare bones of it are fantastic, but you make it even more so.

MPOWell, most of the time, the stories I’m talking about are so ridiculous to begin with. Everything that’s happening down there is actually insane. And it feels like the only way to express it artistically is to go to this heightened area, instead of just being this sort of heavy-handed docudrama. 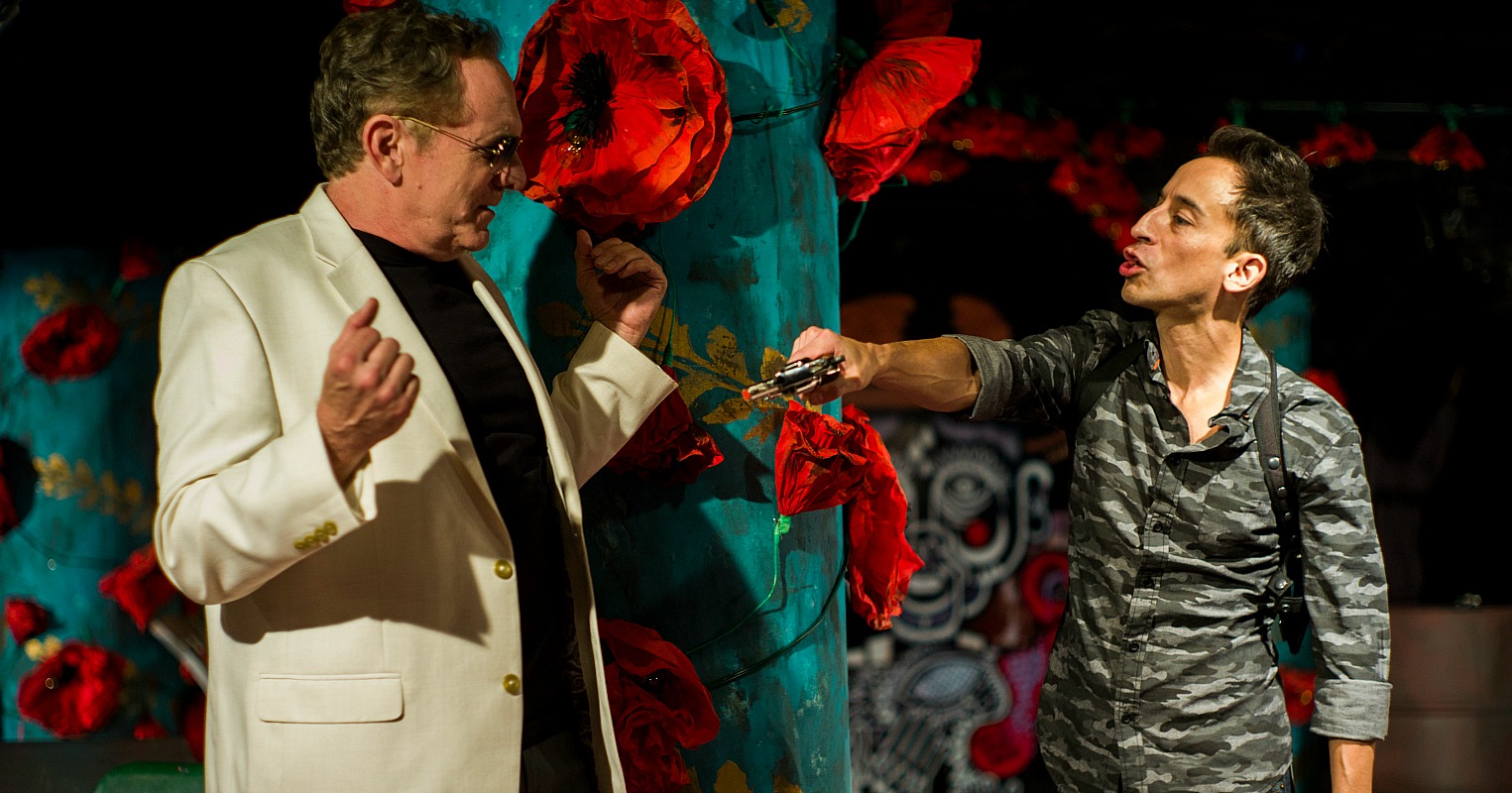 Bruce DuBose (left) as an American drug dealer and Blake Hackler (right) as a local cartel underling in ‘so go the ghosts of Mexico’ at the Undermain. Photos: Katherine Owens.

So the play is dream-like and violently strange and funny. There’s a headless man, there’s radio music that comes from nowhere and can’t be stopped. But in addition to all this, you have stage directions, like at one point you write, ‘The music is now in the sweat of Mari,’ the main character. What do you hope theater companies will do with such stage directions?

MPO[laughing] To me, I’m just trying to get across the feeling of what I’m feeling when I’m writing the scene. Stage directions are the one time the playwright gets to do whatever they want. If you want to say, ‘A thousand unicorns dance across the stage,’ do it. And then I leave it to the theater makers to go wild and do whatever they want to do. So to me, it’s always more like, ‘Here’s how it felt, and now you respond to that, creatively.’

Particularly this one but a number of your plays directly address the entire culture of machismo.

MPOThere’s an element of the old-school machismo that still exists in its own modern way. And I’m very attracted to delving into the very male psyche of stubbornness or a sort of darkness that I think comes up in certain people.

But yeah, it is pretty relevant to all of my work. But the second play in the cycle is actually about the cartels themselves. In my play, however, they’re played by women. And they actually break out into song often. And the reason for doing that is that hearing sort of vile things coming out of a woman’s mouth, lets you see the ridiculousness of it, whereas if it was just a bunch of men, it would seem to be just be a typical, oh, like I get it, this is just some sort of —

MPOYeah, yeah, exactly, exactly. But getting to step back a little bit and look at it from a different angle, I think puts some perspective and lets the audience actually think a little bit more about it.

Is that why mothers appear in your plays?

MPOI mean, that one? I would say, on a very base level, I was raised [by] a single mother. And like, my mother worked three jobs, and so I was constantly seeing this sort of woman’s struggle to raise two sons, and I think just even though we didn’t talk about it, me sort of watching that quietly as the youngest child in the family had an impact on me, yeah.