‘Gloria,’ the new dark comedy at the Dallas Theater Center, is about the near-collapse of print journalism and publishing in the past decade. It’s comic warfare among the cubicles  — until real violence happens. Art & Seek’s Jerome Weeks sat down with director Christie Vela to talk about how playwright Branden Jacobs-Jenkins has people struggle over who owns their own story.

‘Gloria’ presented by the Dallas Theater Center at the Wyly Theatre through Jan. 22.

Now, ‘Gloria’ is set in the office of a major New York magazine, and I’m going to play a cut from the first act. Drew Wall’s character is hungover and he’s angry with Ani, the character played by Grace Montie, because no one else showed up at a party thrown by the office outsider, the office loner named Gloria.

ANI. Where were you last night?

DEAN. I thought we were all going! Why didn’t you text me back?

ANI. Oh no! I thought we were joking!

DEAN. How would me texting you ‘Are you coming to Gloria’s?’ be a joke?

ANI. I totally thought you were texting me as if you were at the party but you actually really weren’t.

DEAN. Why would I ever do that, Ani?

ANI. I don’t know – it just seems like something you would do! I was never going to go to Gloria’s. She’s an emotional terrorist.

Far snarkier things are said in that first act, which is like a David Mamet drama for millennials. It’s about betrayals and office politics. At the same time, it plays like a great workplace sitcom like ’30 Rock’ or ‘The Office.’

CVWell, I think that the playwright, Branden Jacobs-Jenkins, wants us to play the style of the sophisticated kind of ’30 Rock’-like sitcom. And it’s so well written, he’s such a brilliant writer, he gives you the beats, he gives you the set-ups. You don’t have to work very hard.

And the payoff is really great.

The play is ostensibly about the near-collapse of print journalism and publishing in the last decade. But it’s also about an entire younger generation trapped in dead-end cubicle jobs.

CVYeah, that’s true. There’s a whole monologue in the first act where Satomi Blair’s character named Kendra kind of goes off on why nobody’s going to get a promotion anymore and that’s because the baby boomers won’t die. And so the generation under the baby boomers are the ones left doing all the work.

So yeah, the play takes place in the publishing arena, but it’s about so much more and one of those things is the generational gaps. 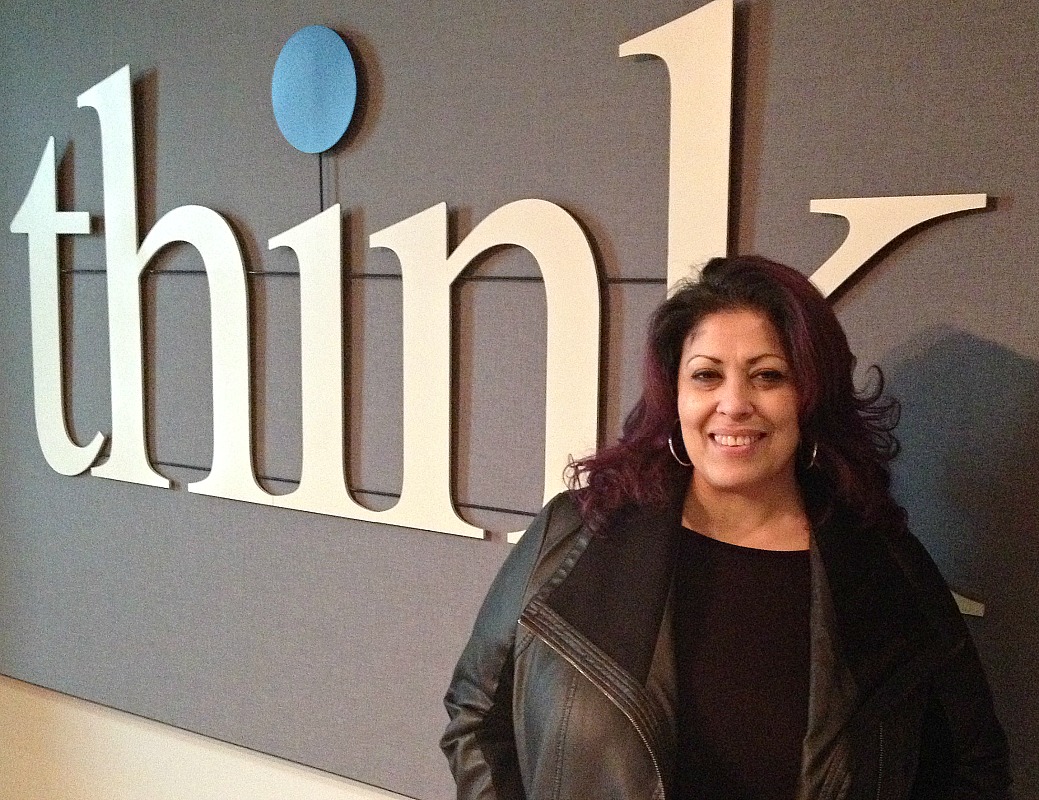 A big surprising catastrophic thing happens at the end of the first act. And the second act is set months later in the aftermath. And in this clip, we have one of the magazine’s fact checkers, played by Michael Federico, who worked for an editor named Nan. And hes talking to a studio official, played by Satomi Blair, who’s making a mini-series about what happened.

LORIN. Why don’t you just make up your own story? Why do you have to use Gloria’s story?

LORIN. What? No it’s not! This was like a group experience. This was a thing that happened to a lot of people! Not just Nan.

So in the second act, ‘Gloria’ becomes something of a ‘Rashomon’ story – the classic Japanese movie by Akira Kurasowa about four people who have different versions of the same events.  But here, we hear from three characters re-telling the catastrophe and they’re not quarreling about the events, they disagree about –

CVThey disagree about who has the right to tell the story, and who owns it and who doesn’t own it.

Because they’re in the media, they’re very aware the story has value.

CVYes, it’s true. But it also doesn’t belong to that person.

CVWell, I mean it’s human nature, when you go through something to make it about yourself. That’s what you do because that’s what humans do to survive – you have to think selfishly first. And so everybody’s first instinct is to make the story about themselves.

Actually, I fell in love with Kendra — who is the least favorite of everyone [laughing].

Oh yes, Kendra is a real piece of work.

CVYes, she is. But she tells the truth. She’s like that Neil LaBute character who’s kind of a jerk but you can’t disagree with.

See, I think we tend to sympathize with Dean, Drew Wall’s character, partly because he’s expressing everyone’s frustrations, while Kendra is blind to anyone else’s problems. She dismisses them. And ultimately, he’s a sad victim of post-traumatic stress.

CVIt’s funny you say this because you’re a man and I’m a woman. And certain people — men — are going to sympathize with Dean. But if you look at it from Kendra’s point of view, who is not just a woman but a woman of color trying to make it in a male-dominated industry — you have to be a bit tougher.

I agree, I understand. But she’d make a better case if she did any actual work — as yes, Dean keeps harping on.

CV[Laughing] That’s true. She is one of my favorite characters.

She is the funniest character.

But I couldn’t help noticing that the playwright gives the fact-checker kind of the last words, the lowly fact-checker.

CVHe’s the lowly fact-checker. He is the only one that tells the truth. Yep. Isn’t that kind of relevant in our time right now? I just heard Denzel Washington go off on some journalist about telling the truth, and I thought, ‘Wow, this is so related to what the play is about.’