COVID has certainly not gone away, but with the vaccine – and warm weather – more people seem to be coming out of hibernation. There was even a parade Saturday, a colorful little street festival celebrating spring, renewal, change — and the collaboration of two local theater companies.

It’s the first co-production, ever, between Teatro Dallas and Cara Mia Theatre. Some 80 people or so gathered in Exall Park near downtown. They got their temperatures checked and donned their outfits. Everyone wore COVID masks, but many were sporting more spangled and festive headgear and costumes. Some were even wearing giant puppet-costumes 10-feet tall or more. In Mexico, these are known as mojigangas. 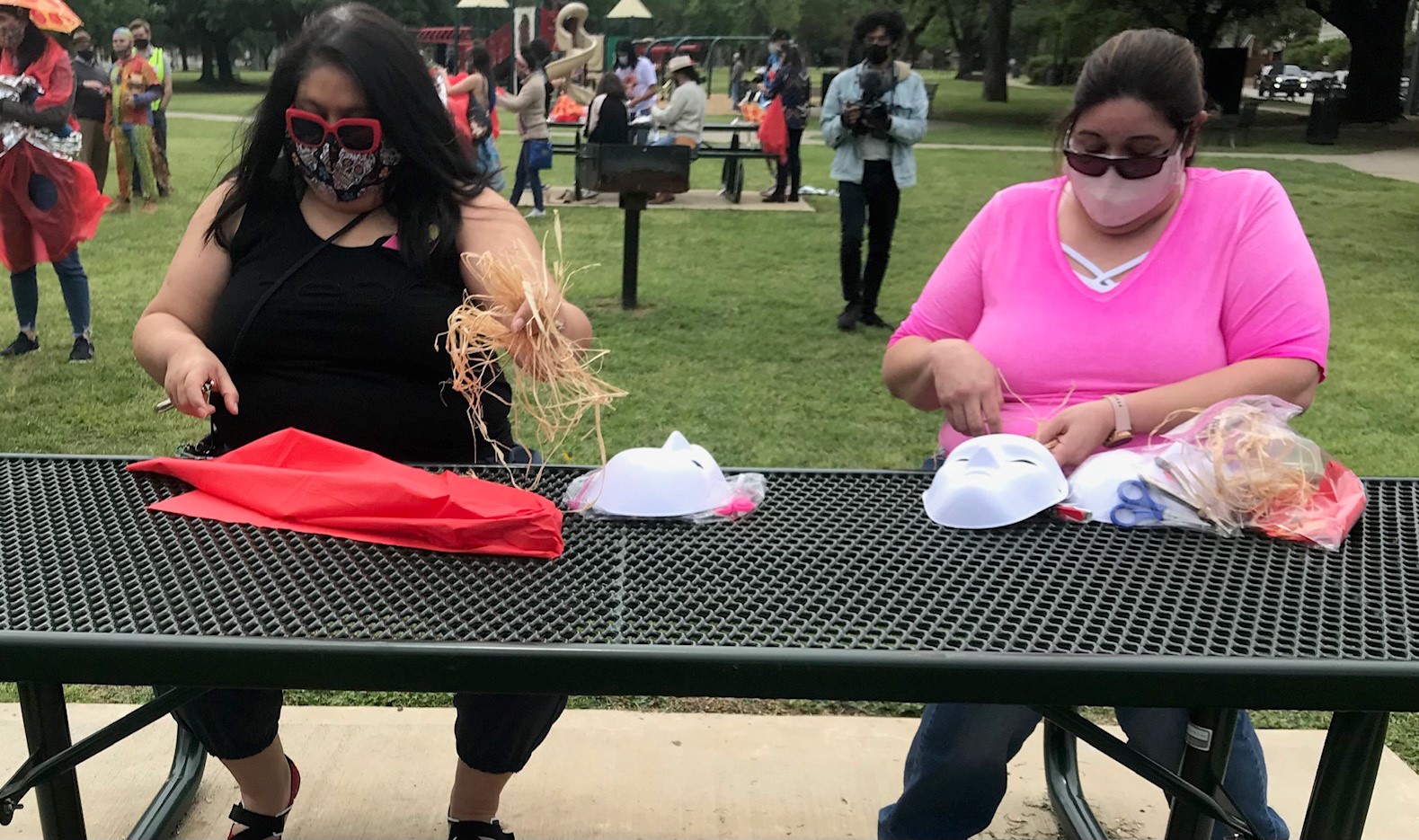 Four tables were set up with craft supplies so everyone could make masks — if they hadn’t brought their own — or they could spangle up what they already had. All images and videos: Jerome Weeks

Jaquai Wade Pearson stepped out with a bullhorn. She was the herald, our announcer and guide.

“Welcome to ¡Soltar!” she shouted to the cheers of the audience.

In Spanish, soltar means to let go, to release. And this kind of event – a marching masquerade with puppets and flag-waving – it’s as old as saying ‘Goodbye winter, hello spring.’

“Finally,” Pearson announced. “We are ready to begin!” And the Big Easy Brass Band from Dallas kicked it off.

Everyone headed down Live Oak Street –to the Latino Cultural Center, about five blocks away. Bystanders waved or got out cellphones to record the people wearing Mexican folk costumes: Skeletons and wolves danced to second-line music, the jazz and funk from festive Louisiana parades. 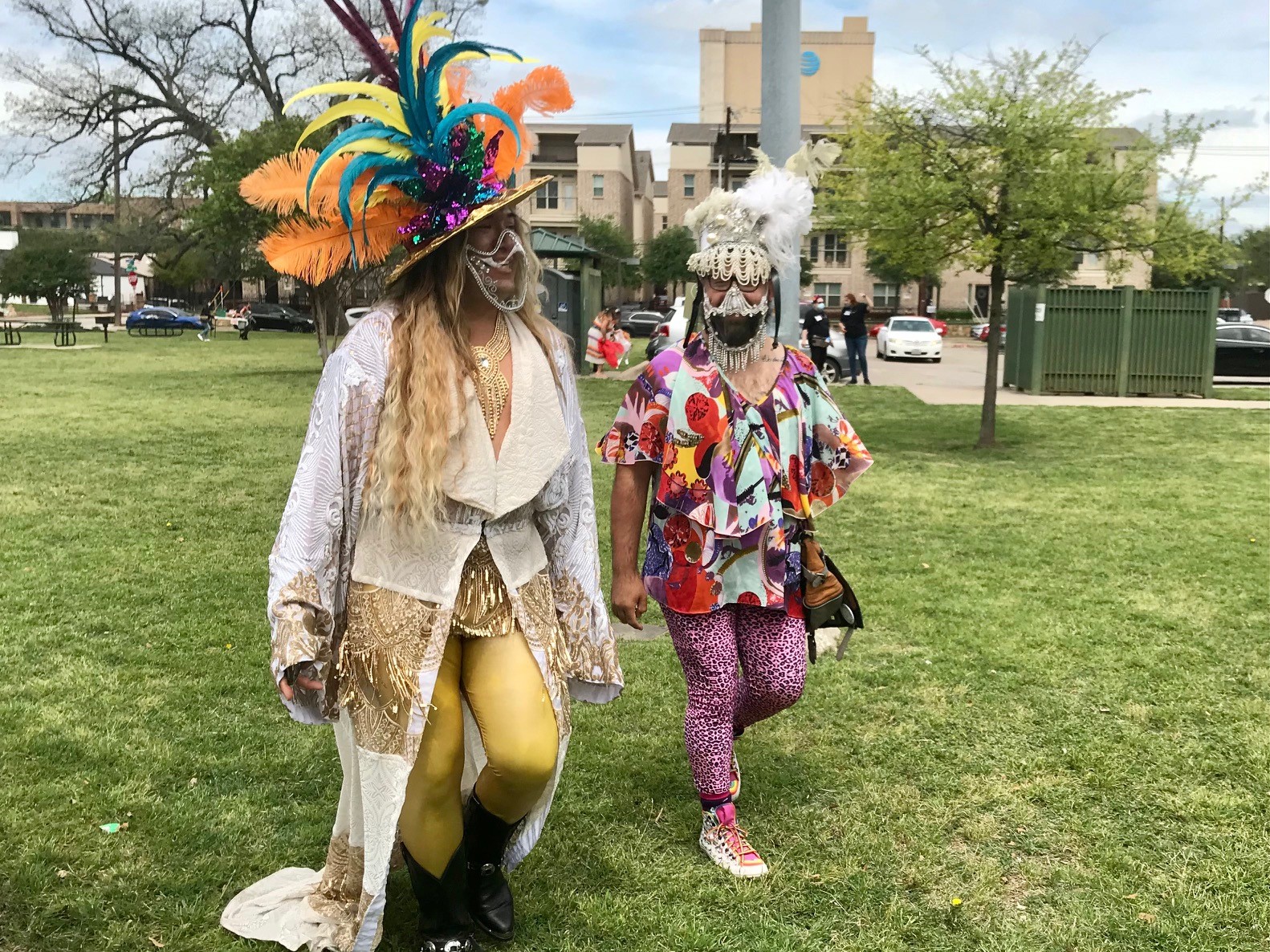 Ryan Matthieu Smith and Jason Villareal in Exall Park as the parade starts off.

Jason Villareal said, “Yeah! It’s very diverse cultures. We have a lot of heritage being performed here. We’ve got some great Latino cultures going on with some New Orleans music.”

Out front was dancer-choreographer Michelle Gibson. She’s from New Orleans, originally, so she knows how to play the role of the second-line’s grand marshal, twirling a parasol, blowing her whistle — and dancing while wearing killer high heels.

At the Latino Cultural Center, people headed up the steps to the plaza. This was where Cara Mia Theatre and Teatro Dallas staged a little pageant about a villainous ruler finally relinquishing his power. And if you sense a little political parable being added to all the other multi-cultural meanings in ¡Soltar!, well, the ruler had built a (fabric) wall.

“It’s a carnival. It’s a celebration!” said Ossorany Gutierrez from Lakewood. “I think what they’re doing is, after all this time inside our houses, in our minds and worry about many things, is a way to just let go and be happy and celebrate life and celebrate that we can be together again.”

The bad old year is banished. A chance for renewal is welcomed.

And for that, we need more music, more dancing.