“The houses were all these bright colors,” she remembers. “It just made me appreciate little things that were going on in people’s homes or things they were wearing.”

“Vivrant Thang,” 500X Gallery’s first physical show in its new space was curated by Bryant and features the work of a dozen local Black artists. It runs through September 13.

As a kid, Bryant would use her disposable camera to capture her hometown and its people.

The ’90s was ripe with inspiration for the young photographer.

Lauryn Hill on the cover of “Vibe,” million dollar music videos from Hype Williams, and Brandy as “Moesha” on the silver screen.

Seeing the young star shine in the blockbuster sitcom was among the many visuals Bryant was taking in.

“That was the first time I saw someone that looked like me in this role that had braids and that was falling in love and how important that was,” Bryant said.

Nowadays, she carries a camera everywhere she goes. The images she captures paint a complex portrait of her life as a Black woman.

“If I’m shooting or I’m doing a video or an installation, it all comes back down to: How am I showing the Black body through art in this way?” she said.

But, her creative energy took a dive this year amid a pandemic and the wave of protests against police violence.

“The world was literally on fire,” Bryant said. “All these people are dying. How can I be in a state of creativity when I’m so concerned about my neighborhood, my community, myself and my mom?”

So, instead she spent months collecting images that spoke to what this moment felt like for her: Protest photos, women in mask and tributes to Breonna Taylor, as well as Twitter memes, posters and triumphant self-portraits.

“It just evolved into these moments of being,” she said. “What is existing and what is living? How do you show that?”

She created an installation using that visual archive that you could see from the windows of the Nasher Sculpture Center.

The piece, titled “Server,” offers a vast collage of images that are deeply personal to the artist but also speak to a shared Black experience.

“I’m very vulnerable at all times, and the work shows that,” Bryant said. “Me being vulnerable about my body, my existence, my childhood, the lack of childhood. I’m always sharing.”

But, Bryant said Black image-makers rarely have the agency of space to share those stories fully.

This year, decision makers in the art world — and in media, entertainment, and sports — are scrambling to say or do something in light of growing calls for racial justice.

In July, “Vanity Fair” tapped Dario Calmese to shoot the cover. He became the first Black photographer to do so since the magazine was founded in 1913.

“Wow, you waited till people were making all this noise to be like ‘Maybe we’re kind of not being inclusive?’” Bryant said. “No, you’ve never taken the time, and even now, you’re not being inclusive. You’re jumping on a bandwagon.”

Presenting our July/August cover star: @ViolaDavis. Last month, the Oscar winner took to the streets to protest the death of George Floyd—but she’s no stranger to fighting for what’s right. As a Black woman in Hollywood, she’s spent her career doing it: “My entire life has been a protest,” Davis says. “My production company is my protest. Me not wearing a wig at the Oscars in 2012 was my protest. It is a part of my voice, just like introducing myself to you and saying, ‘Hello, my name is Viola Davis.’” Davis was photographed by @dario.studio—the first Black photographer to shoot a Vanity Fair cover. At the link in bio, Davis speaks with V.F. about her extraordinary journey out of poverty and into the stubbornly unequal Hollywood system. Story by @soniasaraiya Photographed by @dario.studio Styled by @elizabethstewart1 Coatdress @maxmara Earrings @pomellato

She says institutions are especially keen to capitalize on Black trauma right now.

As part of her practice, Bryant sat through videos of police shootings and 9-1-1 calls that have ended up online.

“Why are people immortalizing these moments that are traumatic and detrimental to Black people? Why are they preserved on the internet?” she said.

Bryant said while the Internet has helped propagate these painful artifacts, it has also opened the door for Black artists to more fully express themselves, creating opportunities to explore Black joy too.

“We have taken control of our narrative in a very specific way, and we can share as much as we want,” she said. 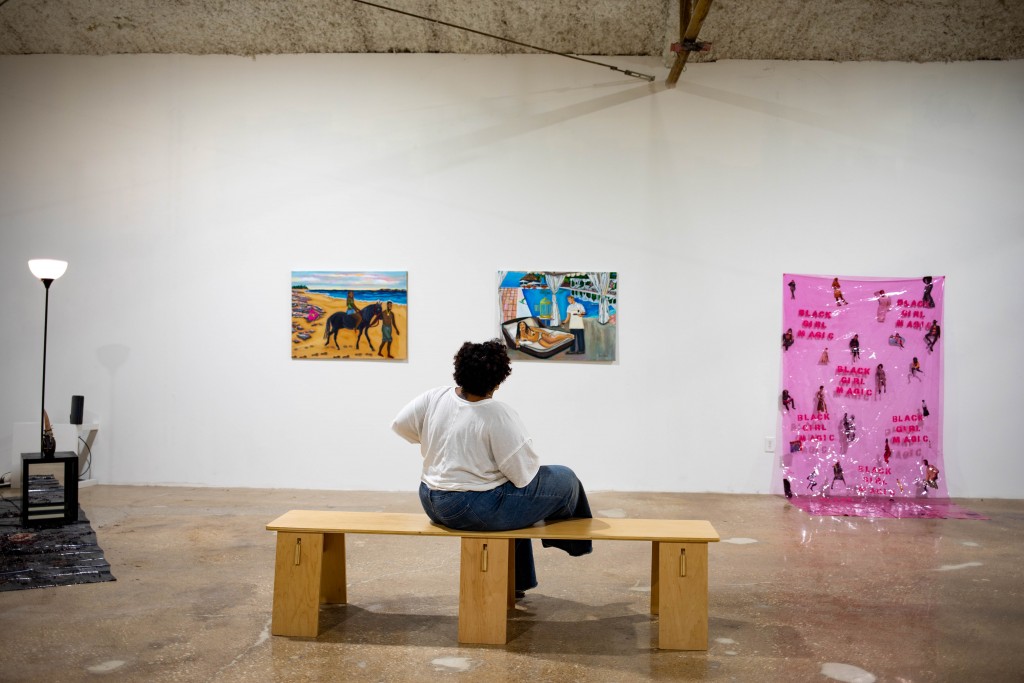 For her latest show at 500X Gallery, Bryant invited eleven artists to do just that. She titled the show “Vivrant Thang,” after the Q-Tip song.

Q-Tip’s song is a play on vivant, which is French for living. The very thing Bryant wants to capture in all its wonderful, awful, vibrant glory.