Joshua Ray Walker picked up a tenor banjo when he was just four years old, and he never looked back.

The country singer songwriter from Dallas released his debut album, Wish You Were Here,  last year. It was a quiet affair, full of beautifully written ballads, and it earned Walker nods from Rolling Stone and NPR.

For his sophomore effort, Glad You Made It, Walker says he wanted to turn it up a notch. 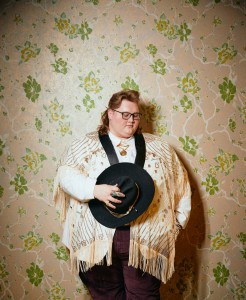 “There’s some Tejano and conjunto influence,” Walker said. “There’s a little ZZ Top. Old storyteller cowboy songs and some ’90s pop country. There’s a little bit of everything I grew up around.”

Walker considers himself a storyteller, crafting characters that are part fiction and part reality.

“I’m always trying to empathize with the characters in the songs,” he said. “Never exploit or make fun.”

On “User,” he embodies an addict, struggling to stay sober, singing, “I think I’m gonna use again. It’s been a long, long time. I’m gonna go get paid. Put myself on display.”

“I have really bad stage fright,” he said. “So, I would definitely drink to get lubricated to be comfortable to be on stage. I know a lot of people with addictive personalities who feel like they have to perform when they’re in public like they’re the life of the party.”

Like “User,” many of his songs are not explicitly autobiographical, but they’re always infused with some personal truths. The standout track on his new record is an exception.

“Voices came out all at once, he said.

The song is about someone dealing with suicidal ideation and depression, he said.

“The chorus and a couple of lines from that song had been swimming around in my head for a while,” Walker said. I’ve never literally parked by a lake and thought about rolling my truck into it, but metaphorically, I’ve been there before. I think a lot of people have been there. I mean, I know they have.”

“Glad You Made It” also shows off Walker’s impressive vocal range, which the singer songwriter says he didn’t discover until a few years ago.

“I had a lot more power in my voice than I realized, but I lacked confidence,” he said. “I never wanted to be that loud. I was scared to really belt.”

Walker had always looked up to country legends like Hank Williams and Slim Whitman, the latter of which was known for his lilting falsetto and yodeling skills.

Walker channels Whitman’s energy on songs like “Loving County,” a slow-burning ballad that shows off Walker’s own impressive yodel.

“I dropped out of public school when I was 15, and I’d just gotten my license,” he said of the song. “My first car was a 1982 Crown Victoria, and I decided I was going to drive to California. I made to West Texas, and my alternator went out.”

He was stuck in Loving County, one of the least-populated counties in the United States.

“It sounds like I’m going out there to bury a lover, but really, the song is about my car breaking down.”

The Casa Linda resident has so far resisted the urge to move to Nashville, the country music capital, because he says Dallas is central to his story.

“It’s really shaped my style and my writing and my career so much,” he said. “If anyone from Dallas ever finds my music and they don’t know who I am, I want them to know that I’m from here, and I’m proud of it.”