Because of COVID restrictions about public gatherings, people have rediscovered drive-in movies, they’ve come up with drive-in churches and drive-in concerts. And, as Jerome Weeks reports, a small Dallas theater company has taken that whole idea one step further.

Not many dance shows begin when the performers get in their cars — the doors thunk shut — and start ‘em up. But that’s how this next dance number goes.

Everything Will Be Fine by Prism Movement Theater will run at the Latino Cultural Center June 26th, June 27th, July 10th, July 11th.

On a recent evening at the Latino Cultural Center in downtown Dallas — actually, we were in the parking lot — director Jeff Colangelo signaled the performers where to park their cars. They formed a semi-circle around the performance area where all their headlights would shine. This was only the second, full-scale, in-the-flesh-and-with-the-pedal-to-the-metal rehearsal for Prism Movement Theater’s new show, Everything Will Be Fine. 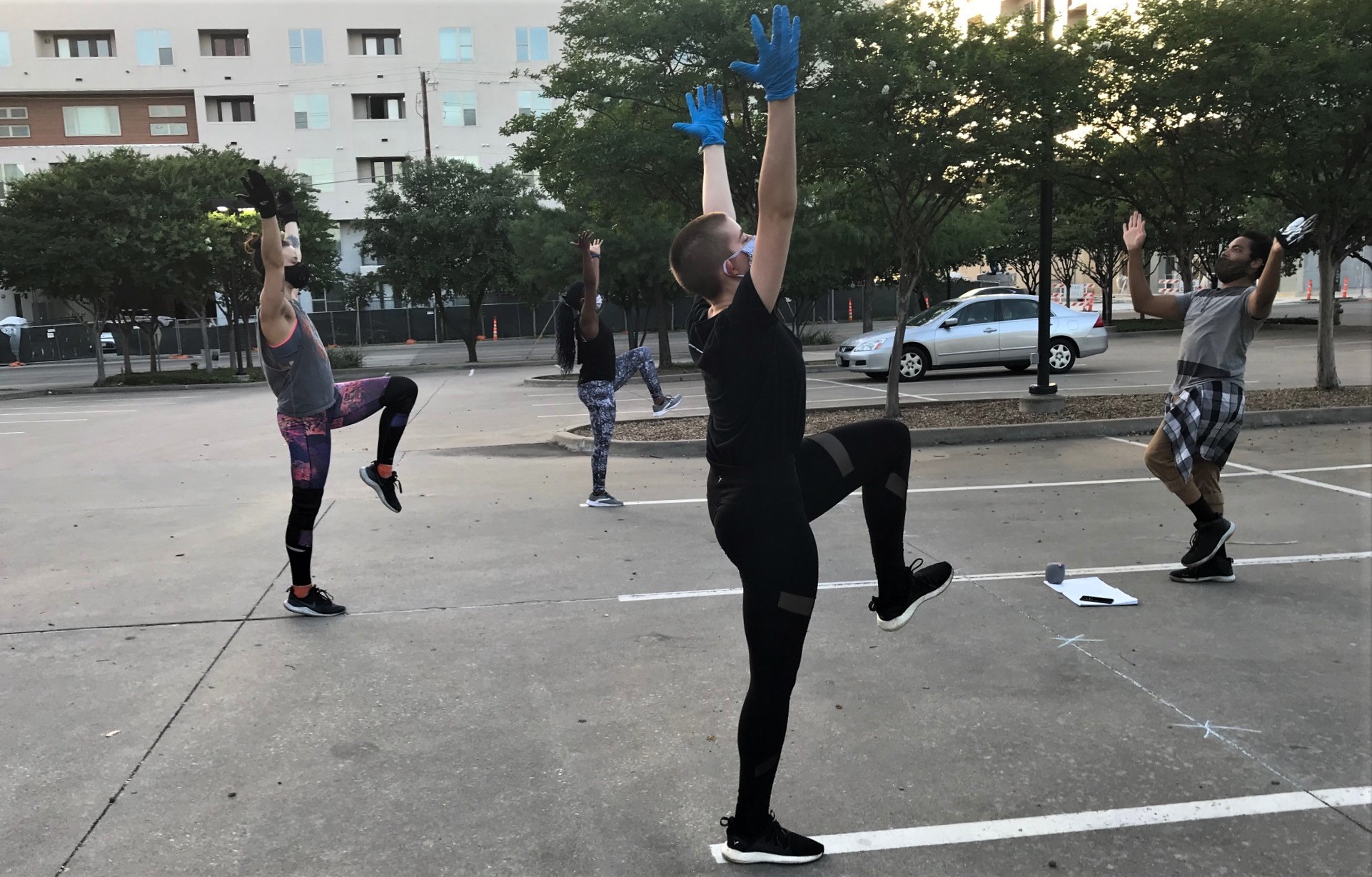 Colangelo will be using cars as COVID-safe ‘bubbles’ for the performers. The idea may seem to be the logical extension of the whole ‘drive-in’ solution for social distancing. Audience members remain safely “quarantined” in their cars – why not the same for performers?

“This is actually been an idea that’s been in the works for several years at this point,” said Zoe Kerr, the playwright behind Everything Will Be Fine.

Two years ago, Colangelo pitched her the notion of an entire drama done in and on and with cars. It wasn’t a story so much as an intriguing, technical staging challenge: The cars would provide the lighting, the sets and the music – which would be broadcast through the audience’s own car radios via a low-watt FM transmitter. Just like a drive-in movie.

But the real challenge was finding funding for this unconventional show. So their plan got shelved.

Then the pandemic halted all the conventional stage shows.

“So we were trying to find something that we could do that was COVID-19 safe,” said Kerr. “And Jeff floated the idea of the car show again.”

COVID didn’t provide just a new reason to try the idea; it helped get them a grant. And it provided the basic story about a young woman grieving the loss of her partner.

“I had just seen a photo from a hospital,” Kerr recalled. “It was doctors holding up a sheet of paper that just said, ‘He is now at peace, we’re so sorry.’ And that image was really sticking with me as sort of an iconic image for 2020. So I started writing down the different stages of grief and how they might relate to this year in which we’re all kind of dying and growing and changing as people.”

“Yes! Cool. Just like that,” he told the dancers. “And of course you can even give them a little more space so they ain’t in your space. But you got that.”

Kwame Lilly is the choreographer for “Everything Will Be Fine.” He yelled partly because of the music, partly because his voice is muffled by his face mask. And because he was standing ten feet from the dancers, behind a blue line that Colangelo had chalked into the concrete.

“Jeff,” he said, “just very jokingly was like, ‘So we’re going to stay here,’ and I’m like, ‘Right.’ And, of course, everything that I’ve created, it also incorporates the actors being that far apart. The only exception is for our love interest [Kelsey Milbourn and Mitchell Stephens]. They are an actual couple. They have quarantined together. So they are the only ones who can touch each other or be close.”

Simply putting six performers into five cars didn’t solve all the COVID-safety issues. Performers start inside one car, then they dance on them, so the cars get wiped down with sanitizer. And each performer brought his or her own car and has stayed with it. Their car passed the audition with them. 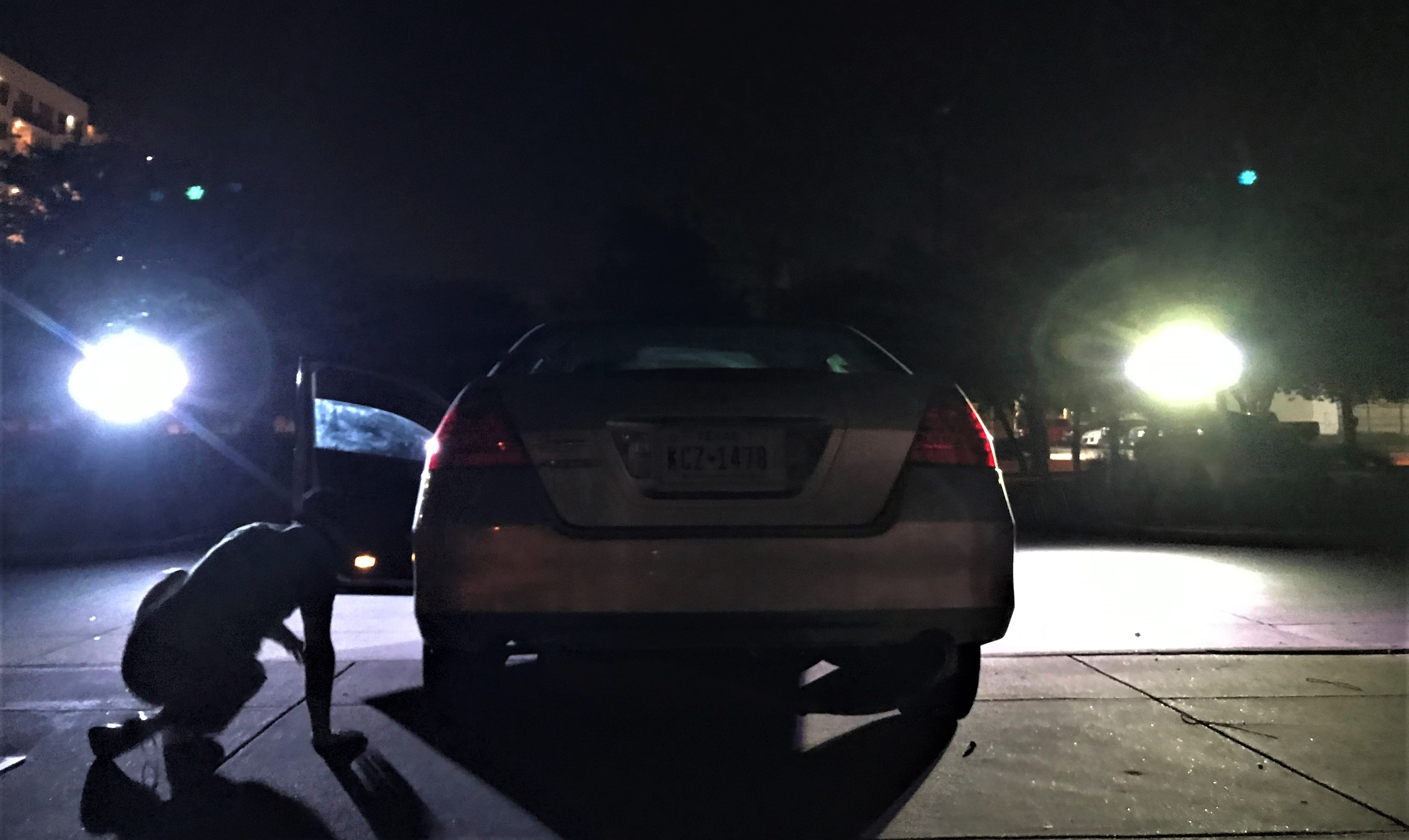 As its name indicates, Prism Movement Theater is not about the spoken word onstage. Colangelo has created dramas through fight choreography, mime, shadow puppets. And now – dancing with cars about human loss.

“It’s been crazy because working with the cars, also working with the social distancing sanctions and also working with being non-verbal — throwing all that together,” said Lilly, laughing, “it has been a process.”  Before these rehearsals in the parking lot, almost everything was done in online meetings — with Lilly sketching out dance directions and stick figures to convey something of what he wanted.

Even getting the show set up with the city has been a process, Colangelo said, if by process we mean yet another challenge. The initial idea was to stage it at the Bath House Cultural Center. That meant dealing with the Parks and Recreation Department – and basically, there’s no category of permit for ‘live theater show with cars.’

Then the Latino Cultural Center stepped up.

Everything Will Be Fine has an advantage for Prism beyond providing a COVID solution for its performers’ safety. It’s drivable. Jeff Colangelo said they’re going to take it on the road around North Texas — after the LCC, they start with Pleasant Grove.

“We’ve always had this dream,” he said, “about being able to put our shows in the back of a car so that we’re able to do our work essentially anywhere, specifically being able to reach people who don’t usually have access to the arts.”

All this time, Colangelo has been thinking about cars. And he said, he realized it’s no surprise we Americans would turn to them during a pandemic – as an escape, as a solace.

“There’s something oddly healing about the American experience with cars,” he said.

They’re one of the places where we can be alone.

Or alone with another person.

Or alone with our thoughts – of a person who’s passed.