As a restaurant critic, Brian Reinhart has arguments. Usually, they’re about things the perfect Pad Thai, the most authentic baklava or the best gas station taco. But one of his recent reviews for the Dallas Observer is kicking up controversy. In this week’s State of the Arts, I sat down with Reinhart to talk about the pitfalls of cooking outside your culture.

Click above to listen to our conversation. Here’s the review Reinhart wrote of Hot Joy.  It’s since closed, though the owner says that was not because of the review. (The original Hot Joy is in San Antonio.)

Here are excerpts from our conversation:

Usually, I think of fancy restaurants when I think of restaurant reviews. But that’s not where you’re hanging out. What are you looking for?

I’ll look for good food anywhere, pretty much. I’m always looking for something that’s off the beaten track or something from a community that the food media doesn’t usually cover. 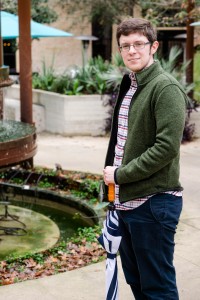 Fine dining is great. But it’s not what I was brought up with; it feels a little like food tourism to me. I’m interested in covering more about what everybody eats, versus what a certain type of Dallas diner eats.

You wrote a scathing review of Hot Joy. What bothered you about that place?

Hot Joy is a pan-Asian restaurant. They serve spring rolls and Ramen and Chinese food and Indian curries. But when you walk in, the atmosphere is all paper dragons and these brightly colored, cartoonish masks of Chinese caricatures. And they’re outfitted as lamps and some of them have red light bulbs, so they have red eyes glowing at you.

What else did you object to, other than the decor?

We deliberately made the choice not to use the phrase cultural appropriation in the essay. Our reasoning was Hot Joy’s issue was something a little simpler, which is at the heart of a lot of these issues, which is respect. What respect are you showing? How are you showing it? It’s not easy to show respect by opening a restaurant, but you can do it through serving good food, through showing good hospitality, through honoring a culture rather than considering it a fad or a fun idea for a party.

Pan-Asian food is a popular trend and you point out that several restaurants will open in the coming months. Are you saying they shouldn’t? That only, say, Thai people can cook Thai food?

Certainly not. I think anybody can make any food they like, if they are doing it respectfully and doing it well. That was unfortunately not the case here, but I’m still hopeful that will be the case in the restaurants opening in downtown Dallas and elsewhere.

What excites you about our dining scene?

The thing that we have here that I’ve never had before in any city where I’ve lived is an enormous Korean food scene. We have upwards of 50 restaurants in Dallas, Carrollton, Garland and Plano. That is, I believe, one of the three largest communities in the United States, along with Atlanta and Los Angeles.

That’s something that Dallas foodies and Dallas food media don’t really give enough attention to.  And if you asked me, what makes Dallas food Dallas food, I would have to say barbecue, steaks, but then I would also say  you’re going to have to include Korean food in that list.