Moving Cities is the name of an ongoing video project by London director Jevan Chowdhury. He portrays different cities through footage of their dancers performing around the cityscape, interacting with traffic and trains. Dallas was the first North American city to bring Moving Cities to town. Local All Things Considered host Justin Martin sat down with Art & Seek’s Jerome Weeks to talk about the striking-looking video recently posted online.

So Jerome, last week I saw an online video – here it is now on the screen – it’s called Moving Cities Dallas. It features a lot of dancers, some excellent black-and-white cinematography of Dallas. So what is this?

JWIt’s an ongoing project by a man named Jevan Chowdhury, a London-based video director. And he has his own video company called Wind + Foster. And he came up with this idea couple years ago. Essentially, what happens he makes a kind of commercial for a city, about a city, using dancers in the cityscape. 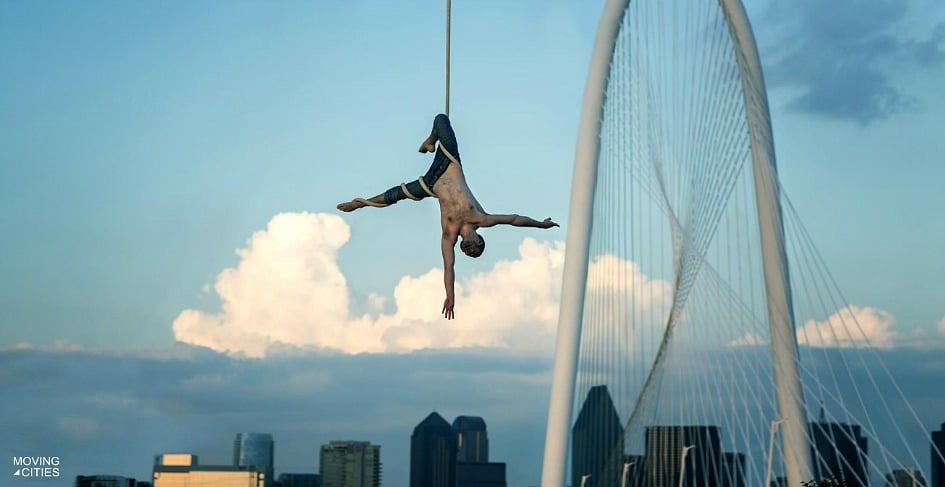 I looked at their website, MovingCities.com and it looks like they’ve done this in multiple cities in Europe. Dallas apparently was the first North American city. Why did they pick Dallas?

Visit Dallas, the new name for the Dallas Convention and Visitors Bureau, approached Chowdhury — they would raise most of the money for this. The different cities essentially hire him, and Visit Dallas contacted a number of local people like Charles Santos, the head of TITAS, and they put together a steering committee for this because they wanted to bring as many dance groups together to showcase them.

And that’s what happened. Chowdhury came to scout out locations and then he came back in September, and they shot all this in three days. In that time, they didn’t shoot just the video; Chowdhury also shot stills of the performers, sometimes with onlookers [several of which are included here – that’s Albert Drake uptop of Bruce Wood Dance Project and Claude Alexander III flying outfront]. Charles Santos reports it was unbelievably hot with extremely long hours, but typical for dancers, onscreen, everything looks effortless or excitingly physical — yet I don’t think we ever really see a drop of sweat. Dallas doesn’t even look especially hot. But I don’t want to think what it must have been like for Nycole Ray of Dallas Black Dance Theatre to stand by a freeway interchange on top of a bunch of concrete drain pipes. 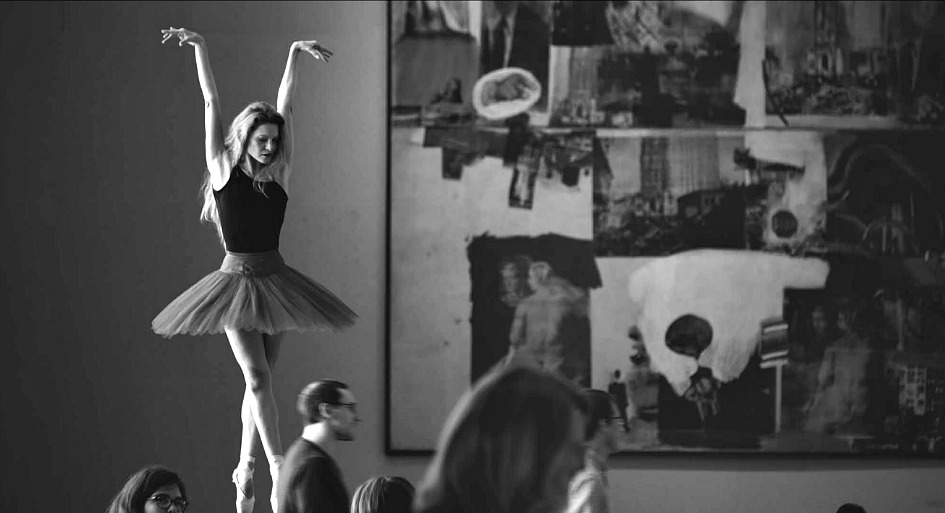 Paula Ulery-Reynolds at the Dallas Museum of Art.

They certainly succeeded in bringing in a range of dance styles. You think it’s just going to be modern dance or ballet at the start, but then there’s hip-hop, there’s a mariachi group, there’s the Dallas Cowboys cheerleaders?

JWOf course there is. They’re appearance was probably inevitable — but three times?

But one thing that really caught my eye was how often dancers would be moving in synch with construction equipment behind them; they’d echo the traffic or DART trains or the buildings. It’s like he makes the city their dance partner.

JWExactly. It’s called Moving Cities for a reason. Chowdury loves the energy of cities, and the dancers play off both all the movement going on as well as the solid, vertical buildings around them. You see Olga Pavlova of Texas Ballet Theatre standing en pointe in Thanks-Ggiving Square and her snow-white tutu and her tall, extended presence is in counterpoint to the white, spiraling Thanksgiving Chapel behind her. Or you see two regal dancers from the Indian Classical Heritage Foundation — with a traffic cop behind them holding back cars and he casually uses the same hand gesture the dancers do. There are all of these visual echoes and synchronicities; Chowdhury is a masterful editor.

But in no other city he’s visited do you see so much construction going on. It’s everywhere. I have to quote Monty Python’s Eric Idle from last week when he and John Cleese were at the Majestic Theatre. “It’s a lovely city, Dallas,” he said, “let us know when you’ve finished it.” Construction is as much a city landmark here as Reunion Tower — there’s this overwhelming sense of a city being built, still.

Do you know why he picked the soundtrack he did?

JWNo, all the videos sound similar, they’re basically electronic dance music or EDM. And sometimes, rather generic EDM at that. But because he does show this range of dance styles, the EDM solves a basic problem. You’re in Dallas, do you play nothing but country music even when there are ballet dancers on screen?  But when seen all together, these videos do suggest that what unites cultures across the planet are hip-hop, modern dance, endless traffic and relentless, somewhat thin, electronic dance music. 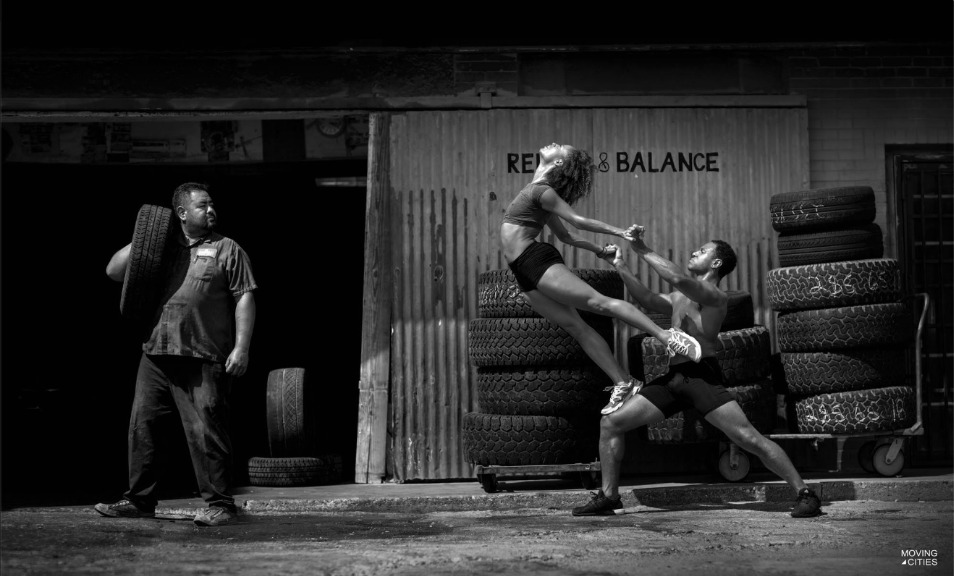 Something else I found refreshing, whenever you watch something shot in New York or Dallas, what do you see? The skyline, generally at night, all lit up. That’s not the case here.

JWYeah, the standard glamor images, the establishing shot of the iconic landmarks. He avoids those – they’re too static. If they appear, they’re off in the background. Again, Chowdury wants movement. It’s like his cities are powered by dancers. The way he edits with his swirling camerawork, everything is a dance. And it’s really pleasing to see that kind of showcase given our local dance groups, like Bruce Wood Dance Project, Texas Ballet Theater and Dallas Black Dance Theatre — a chance to strut their stuff.

In all honesty, I have to say, a lot of the dance styles, I normally wouldn’t find them that interesting. But I don’t think I’ve ever found dance so fascinating to watch.

JWIf you’re going to have a commercial for a city, better to have one like this than the usual ones with happy families and the soaring skylines. With all of his quick-cut synchronicities, Chowdoury makes dance fun, he makes it fascinating to watch.