Guinn Powell sees life as his palette. He paints archival photos and his own memories of life in East Texas during the 1950s. Behind every stroke, there’s purpose and proficiency.

“I want to be exposed to all the different aspects of life,” Powell, 69, said. “I don’t want to ever be pigeon-holed to just one thing.”

The Dallas-based artist and Dallas Morning News senior creative designer was born in East Texas to a mother who was a school teacher and a father who was a Baptist minister. At home, creativity was always encouraged. As an artist, it wasn’t hard for Powell to find inspiration or document life in the rural outdoors.

His artwork reflects on his everyday memories of Black life in the country, from picking cotton to living in segregated neighborhoods.

Powell’s current exhibition, “New Beginnings,” contains paintings of African Americans living during the Jim Crow era. The works primarily capture life in the 1950s, but go as far back as the 1930s. The 11 paintings on view at the Oak Lawn Library Friends website were inspired by historic photos and archival images.

One of Powell’s paintings is a copy of Gordon Park’s photo, Colored Entrance. Others draw on images from the Library of Congress. 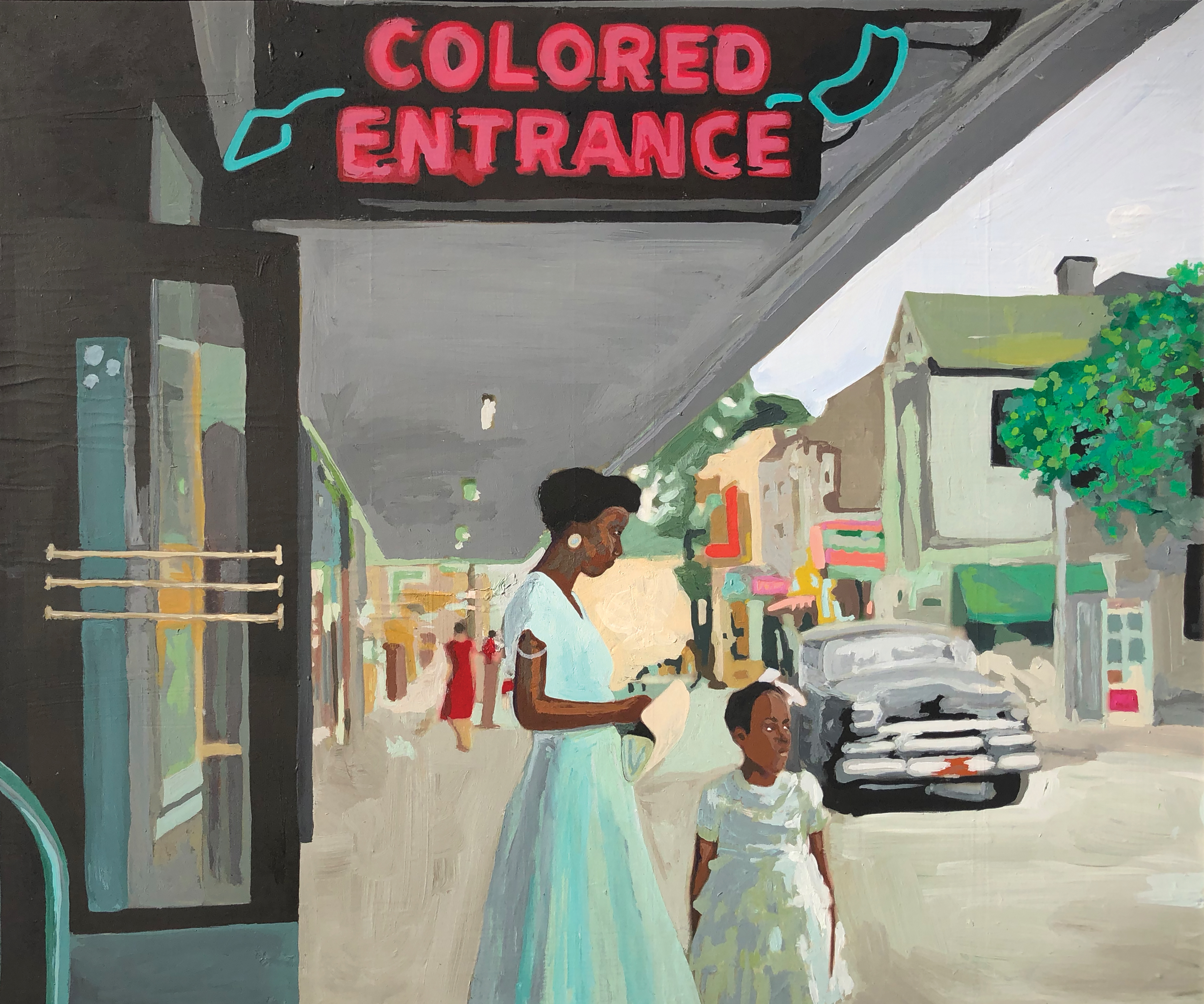 “I’m driven to these historical images because of the need to respect the past in order to enlighten the future,” Powell said.

Powell lived those experiences. His hometown was segregated when he was growing up. His friends and classmates picked cotton in the summer. He joined them.

“I didn’t have to, but I wanted to experience that for myself too,” Powell said. “So that’s where it all began, having that exposure and knowing that this is actually how people live.”

Powell uses different mediums, but with all of his work, he hopes to start bigger conversations about race, about how the past is still with us today. 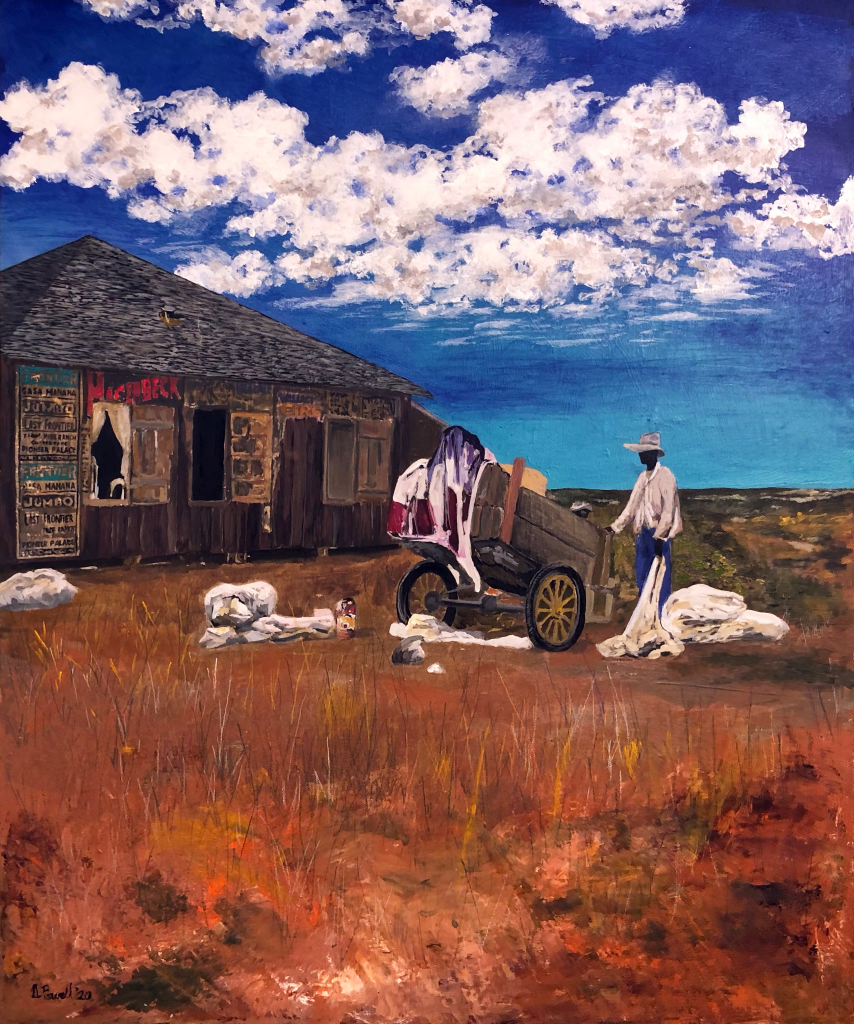 “Panola County,” by Guinn Powell is inspired by a photo from The Library of Congress.

In 2014, Powell held an exhibition called “Long Road to Freedom: Historic Witness Accounts of Freed Slaves.” It featured slave narratives from the 1930s, including historical photos and recorded voices.

Most of the works in the “New Beginnings” virtual exhibition were created during the early months of the COVID-19 pandemic. Painting stories of Black life helped Powell stay focused and feel stable in the midst of uncertainty. 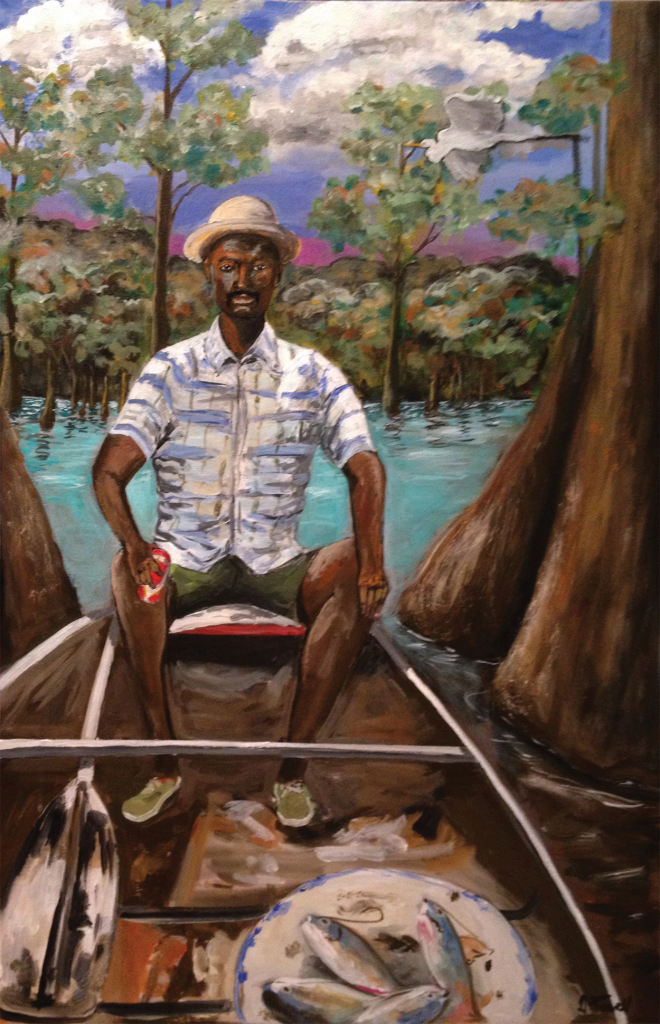 Uncle Ennel, by Guinn Powell, is inspired by a photo he took on Caddo Lake.

But then, this summer, came the death of George Floyd and the protests against police violence. These were deeply painful to Powell.

“I had to immerse myself in something that really puts me in a place that I can stay focus,” Powell said.

Painting became even more of a life line for Powell.

He’s inspired by images of life in the mid-twentieth century because they tug at his heart.

“That hardship, that struggle, that reality is a part of who I am and it makes me feel grounded to know that those are my roots, that’s where I came from,” Powell said. “I think it’s impossible to be honest to the future unless you actually know where you come from.”