In fact, both tours are competing in something of a mad scramble by different van Gogh shows for North American markets. There’s a third immersive van Gogh event touring the country. It’s just not coming here. After a few dates, it’s aiming to settle in as a semi-permanent exhibition at the Indianapolis Museum of Art. But there’s a also different one in St. Petersburg, and another in Miami.

Confusion over the two tours that are coming to North Texas is understandable: One is called Van Gogh: The Immersive Experience. The other is The Immersive Van Gogh Exhibit. For clarity’s sake, let’s just call one the Experience – and the other the Exhibit.

Although the Exhibit was playing catch-up last week for attention in Dallas, it has an advantage: It calls itself the “original” 3D Van Gogh. That’s because the partnership behind it, Lighthouse Immersion, was inspired by a long-running Paris attraction at L’Atelier des Lumières  (“The Studio of Lights”), a venue that’s specialized in these kinds of easy-access, high-art, high-tech eye-dazzlers. The current one there is Dalí, l’énigme sans fin — ‘The Endless Enigma’ — which, needless to say, looks way trippier than the van Gogh. 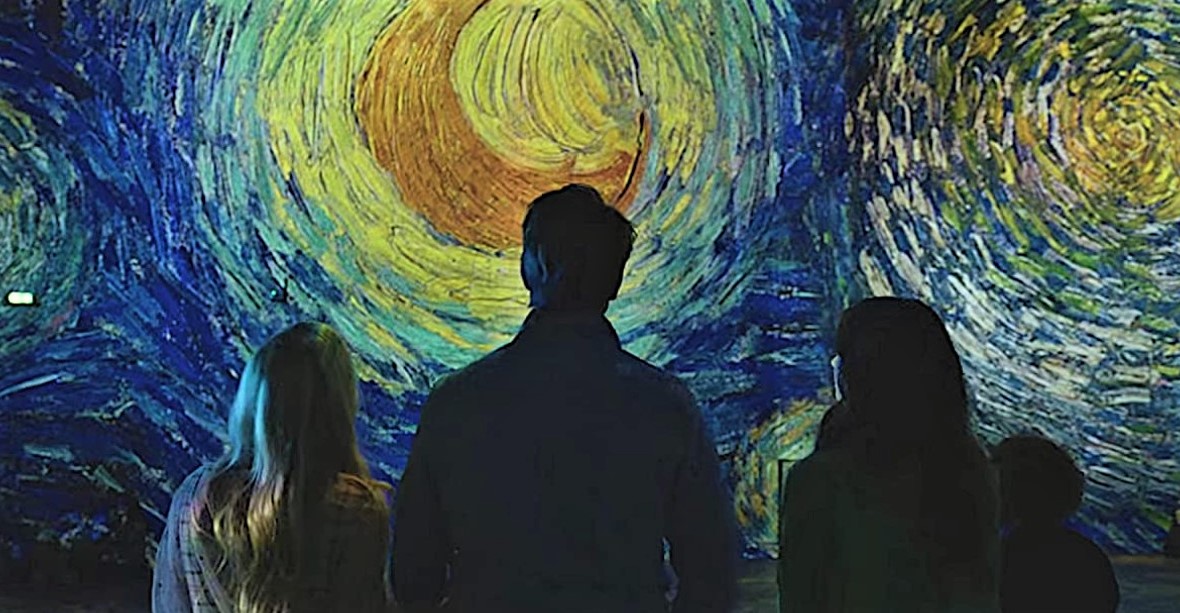 It’s EXACTLY like being inside a venue for giant, 3D, digital paintings! From episode 5 of ‘Emily in Paris’ on Netflix.

You may have even seen part of that original French L’Atelier show –  if you’re a fan of the frothy Netflix rom-com, Emily in Paris. In Episode 5, the cute, plucky young American (Lily Collins) — who’s  implausibly winning over Parisians despite her complete lack of fluency with French — went out for a night on the town with two friends and ended up in the “Starry Night” room: “I feel like I’m actually in the painting,” she marveled. If the Golden Globe-nominated Emily plays like a glossy ad for popular Parisian tourist locations, the van Gogh scene may explain the sudden rush to get digitalized van Goghs to American cities: Hundreds of thousands of us just saw a romantic trailer for it.

Immersing people into paintings via walk-through light shows like these has actually been popular in Europe for a number of years. There have been ones on Picasso and Monet.  The Experience – the other van Gogh show coming to Dallas – started life in Brussels before heading into Italy, England, Tel Aviv and even Asia.

But COVID could be a major reason for these tours as well: The events are generally held in large, open spaces like warehouses, even stadiums, so social distancing is not a problem. And although social distancing means smaller crowds, the venues are big enough, the producers can still earn some coin. Plus, there are no musicians, actors or dancers to worry about (or pay) on tour. And given the general paucity of live theater, music or dance performances at the moment, the van Gogh shows combine relative safety, cultural-name recognition, high-tech zip and a welcome night (or afternoon) out.

So — which show coming to North Texas is better? Some of the shows are individually designed to suit whatever space they’re in, and so far, neither of the two has announced where it’ll play in Dallas. But you can compare the two when they get here; their runs overlap. The Exhibit will be here June through October. The Experience is coming August through November.

But let’s not forget the real thing.