Drugs, immigration and gangs – that’s all we seem to hear about from the Texas/Mexico border. A couple of North Texas artists are hoping to change that though. We looked into how these two young women plan to use indigenous art to change perspectives.

Naturally dyed cloth, woven nets, cactus skeletons, and hog guts. Those are just a few of materials that fiber artists Sarita Westrup and Analise Minjarez work with. They create stone-simple, hand-woven sculptures and installations inspired by that region.

“We are very interested in minimalism,” says Westrup. “And we think a lot about ideas of landscape, identity and bi-cultural aesthetics on the border.” 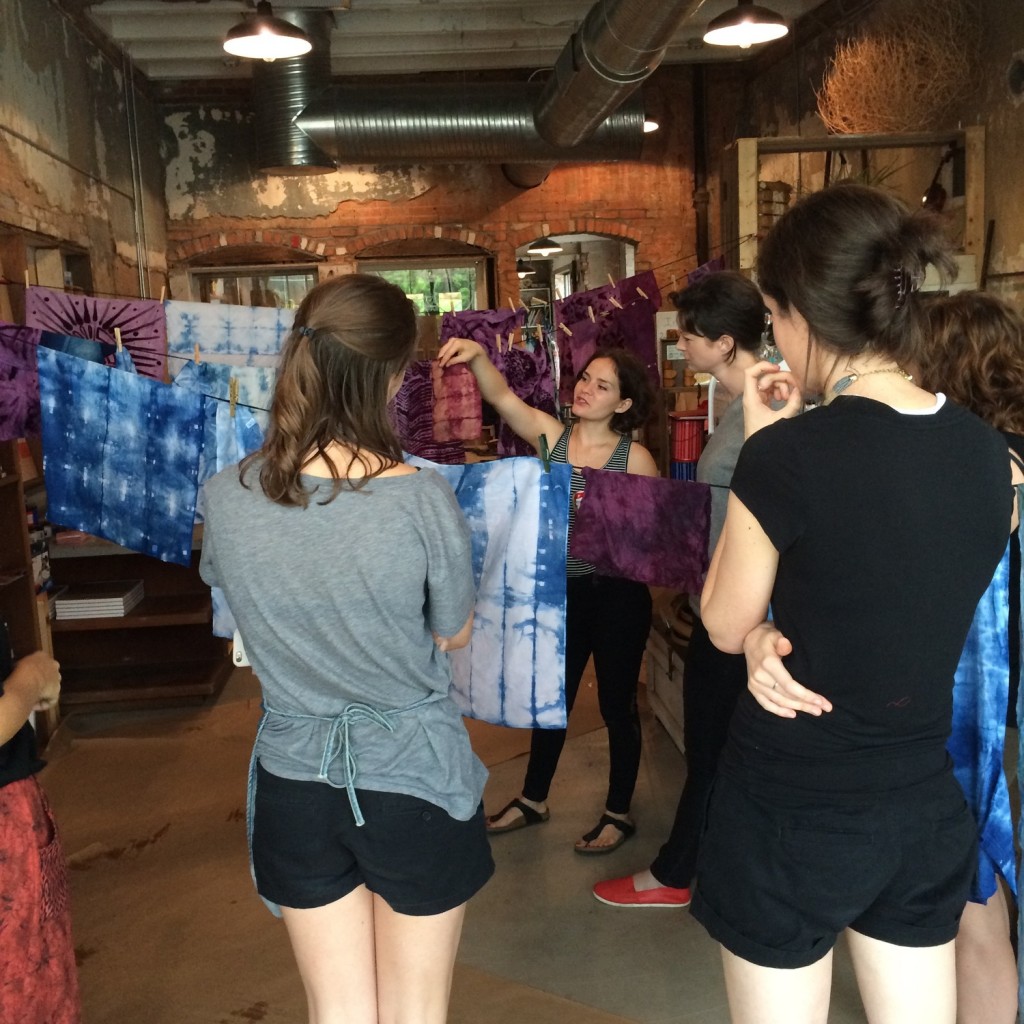 Westrup (27 year-old ) lives in Oak Cliff. She and Minjarez have been creative partners for three years. They create work that pushes against expectations of art from the borderland. She says they don’t want to be told what is or isn’t Chicana art.

“We work to provide something that you didn’t notice about that area. We’re trying to show this nuance, this layered idea of what a Mexican-American region can be like,” she says.

Together Westrup and Minjarez work under the moniker Tierra Firme, which translates as ‘solid ground.’ 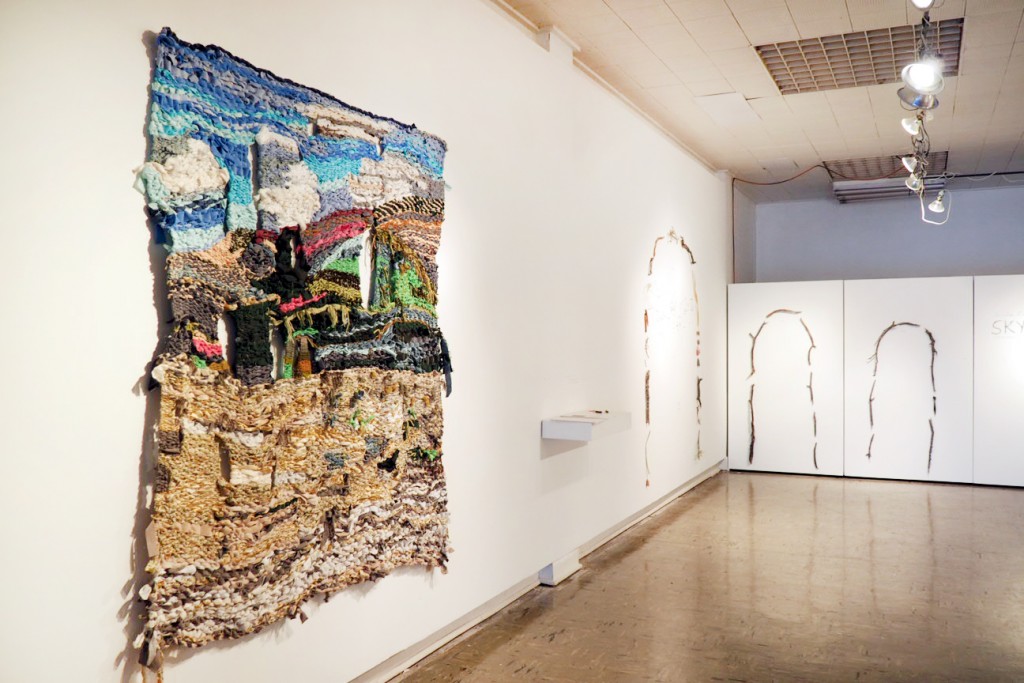 The pair has woven tapestries made from donated National Park uniforms. Tapestries featuring landscapes from West Texas. They’ve produced map-like installations of the land along the Rio Grande using spices, dirt, rocks and macramé. Most recently, they’ve fabricated artificial portals that audiences walk through. The portals recreate a migrant’s path to America. 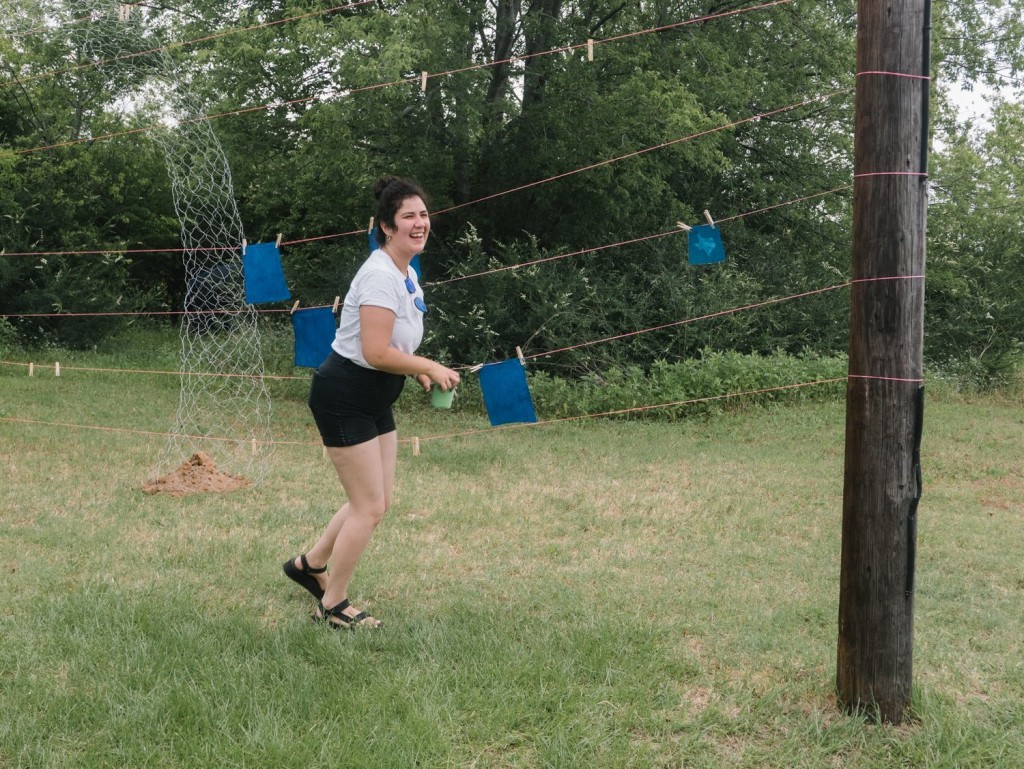 Minjarez -who lives in Denton – says there’re more to life on the border than narcos and the wall.

“We’re also very interested in celebrating this region. For us it’s not a negative. It’s more than a positive. It gives you an experience where your perspective is wide,” she says.

Minjarez is from El Paso, Westrup’s from the other end of the border (nearly 800 miles away) in McAllen. Geographically the cities are vastly different. El Paso’s an arid desert with mountains. McAllen…not so much.

“We have palm tree oases mixed with cactus, mixed with bougainvilleas, plumerias – so there’s this like tropical colors and flowers right next to desert,” says Westrup. 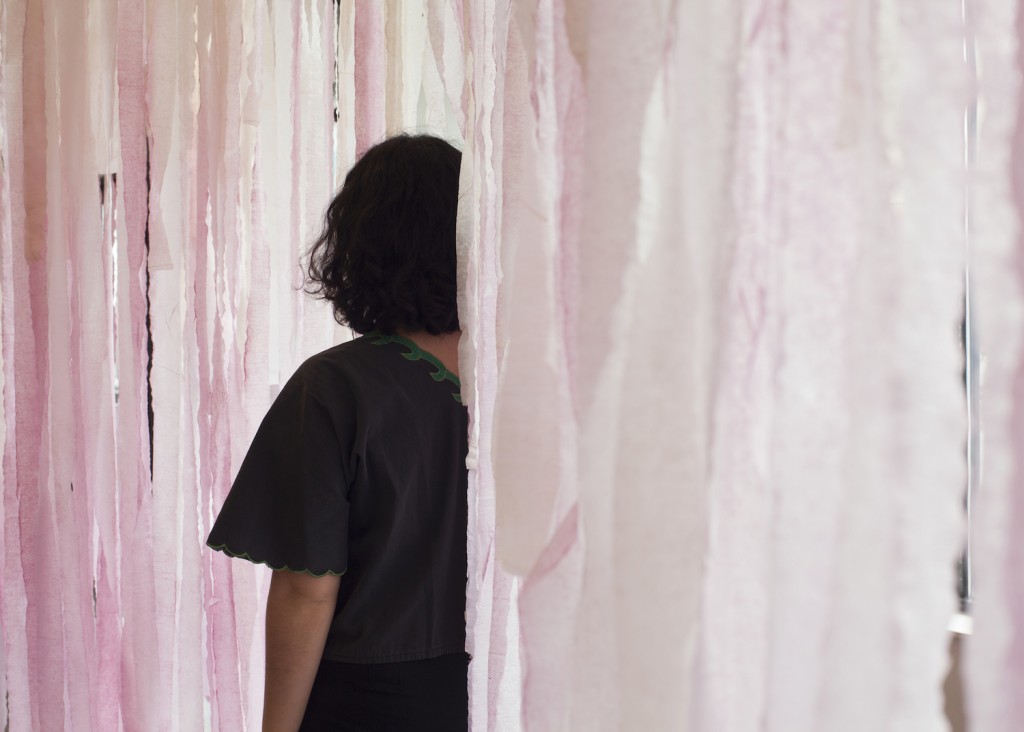 El Norte is a site-specific installation that simulates the shape of the Texas-Mexican borderline. Photo: Tierra Firme

One of the things these communities share with the artists they’ve bred is a dual identity. They are Mexican and American. Minjarez says that duality is key to their art.

“We like to have two perspectives in Tierra Firme because we are showcasing a perspective that’s shared of the border region,” Minjarez  explains. “It’s not just my border or Sara’s border.”

They understand their individual perspectives doesn’t represent the masses. 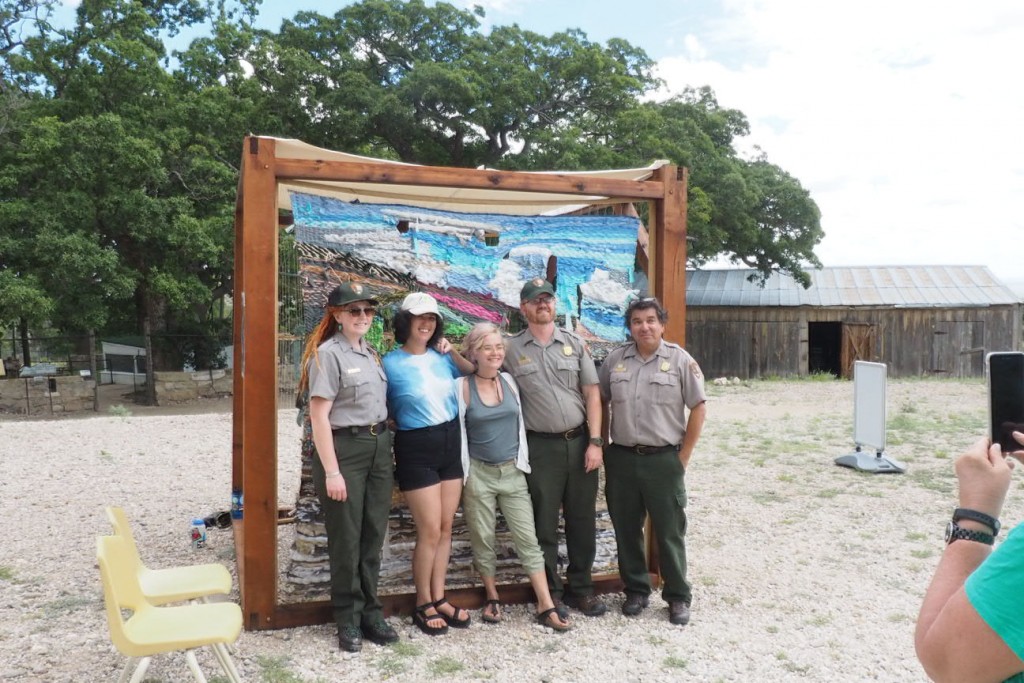 Tierra Firme invited visitors of the Guadalupe Mountains National Park to join them inside the Land Loom shelter and take the time to experience the park in a different way. Photo: Tierra Firme

“We value education,” says Minjarez. “That’s how you learn about culture. And so when we teach, we have a game plan. We have a lesson plan. We’re teaching you an art technique, but we have a conceptual lesson as well. And it always pulls back to the border.”

“I teach surface design with natural dyes and I really like to focus on the Oaxacan tradition of using marigold flowers, cochineal and indigo to create the rainbow,” Westrup says.

These two daugthers of the border met in Denton at the University of North Texas and they’ve put down roots in DFW – which has helped them in the North Texas Arts scene – but for each of them, the border will always be solid ground. 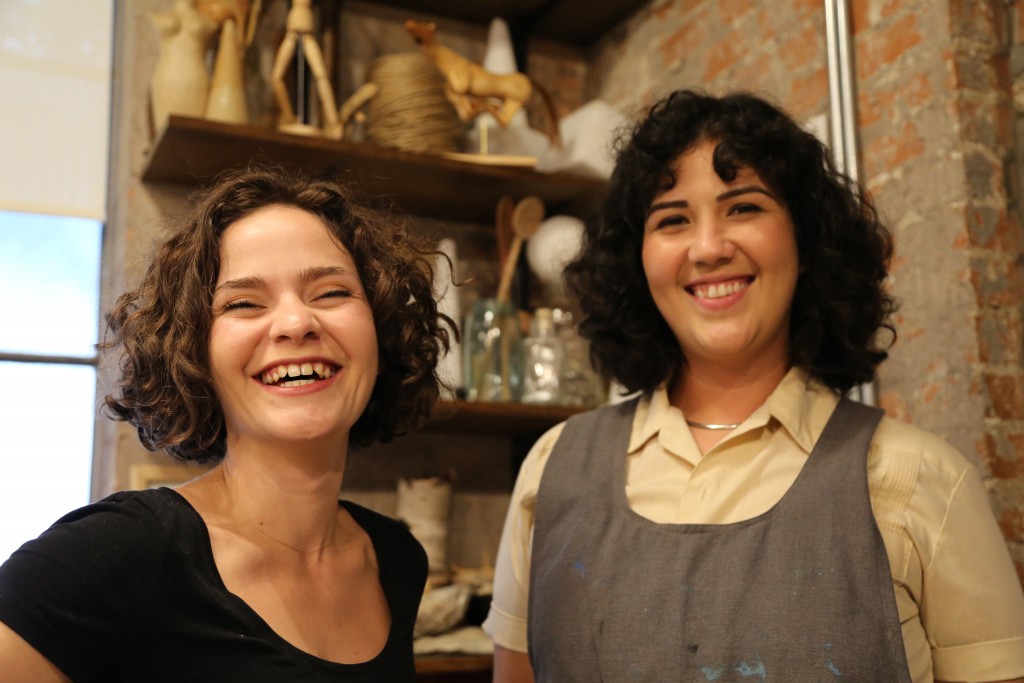 Cultural heritage and home are factors in the creation of your work, but you are making artwork that is going to be representative of the entire border. What sort of research do you do before you create new works?

AM: I think we begin by telling stories. I think that stories are so important in culture and I think they’re something that can’t be taken away from someone.  So we start there.

Things like, ‘Hey! This reminds me of a birthday party that I had at a park with my whole family.” Then Sarita will be tell me about something that she’s reminded of. And as we begin to tell stories we start to we start to compare. We’re both from the border, but from completely different regions, so we see a lot of similarities in our culture. Those similarities create a really strong bond between us. But we can pick up on those tiny differences and we can use both the similarities and the differences as inspiration for work.

For me, I think about a certain type of table cloth that my family used to use at parties. Then we might use a similar table cloth in the work by weaving it or something like that.

SW: Yea. But I think it’s very intuitive. We are daughters of the border and we take that very much to heart. And from what we’ve seen – and because of our family and their stories – we can embody the border culture. So some works are intuitive or sensational, but other works can be very research based. Those are usually about facts and figures and numbers though. But I think the materials and the bi-cultural aesthetics that we’ve grown up with are the biggest inspiration for our art. 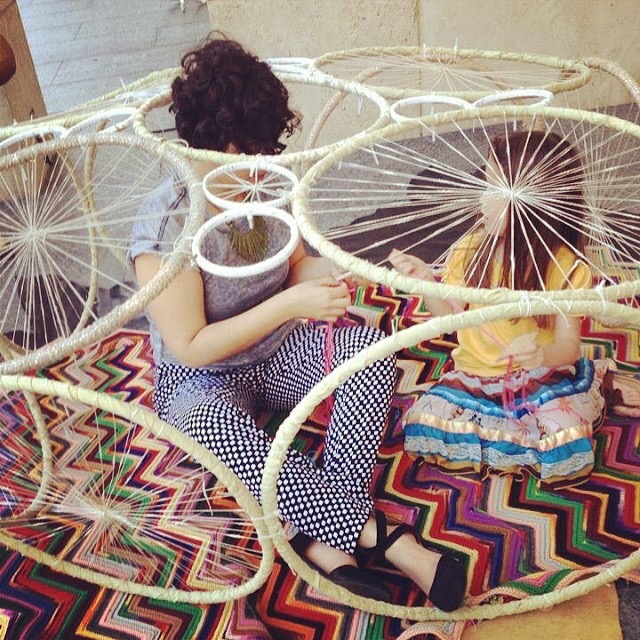 Members of Tierra Firme promote the use of fibers in fine art by continually leading workshops at Oil and Cotton in Dallas, Texas. Photo: Tierra Firme

Being ingrained in one’s culture is totally possible when you’re home. But you two are many miles away from the border communities that you were raised in. How do you hold on to your culture and heritage?

AM: I am a young American and I don’t have any children. Also, my family is very far away from me. So it can be difficult to replicate home. But I have really good friends in North Texas and we do have parties and do partake in some of my cultural traditions, but I am still building my life in a way that allows me to do so regularly. I know they’re coming. And I know that the cultural traditions will all be a part of my life and my family’s life in the future.

One of the things I love about working with fibers is that fiber art has been a part of many cultures around the world for years and years and years. And each generation gets an opportunity to take those techniques and make it their own. That’s why I value my fibers education so much. But I think the same is true about life.

SW: I think I celebrate and embrace my culture through music. When I am alone I listen to music in Español. For me, listening to music helps me to feel closer to my culture. The music helps me practice my parents’ language and helps me learn the history of the people who’ve made music and told stories from my heritage. It also helps me impress native Mexicans (laughs).

Being able to impress some native Spanish speakers is really cool and really helpful. I don’t know why, but you don’t meet very many Latin people in the arts program and so when I do, I am very much like, ‘Hello. Let’s hang.’

I have to admit, for me, meeting a fellow Hispanic individual was pretty rare on my college campus. I know they were there, but they weren’t part of my program. Was that the same for you?

AM:  Yes. I mean sometimes I have to remind myself that we are so lucky. We have our degrees and we have friends. You know? Sometimes I forget that not everyone gets to do this. Good job (she looked at Sarita and myself), good job! It’s time to keep going and to make work that talks about our experiences, so that other people know that they are only limited by what they think limits them. You know?

SW: Yes. But another way that I have been able to feel closer to my culture is by volunteering. I volunteer at the Oak Cliff Cultural Center and the Latino Cultural Center. Talking with them about helping out and about programming helps me to meet new people. It also helps me practice my Spanish. 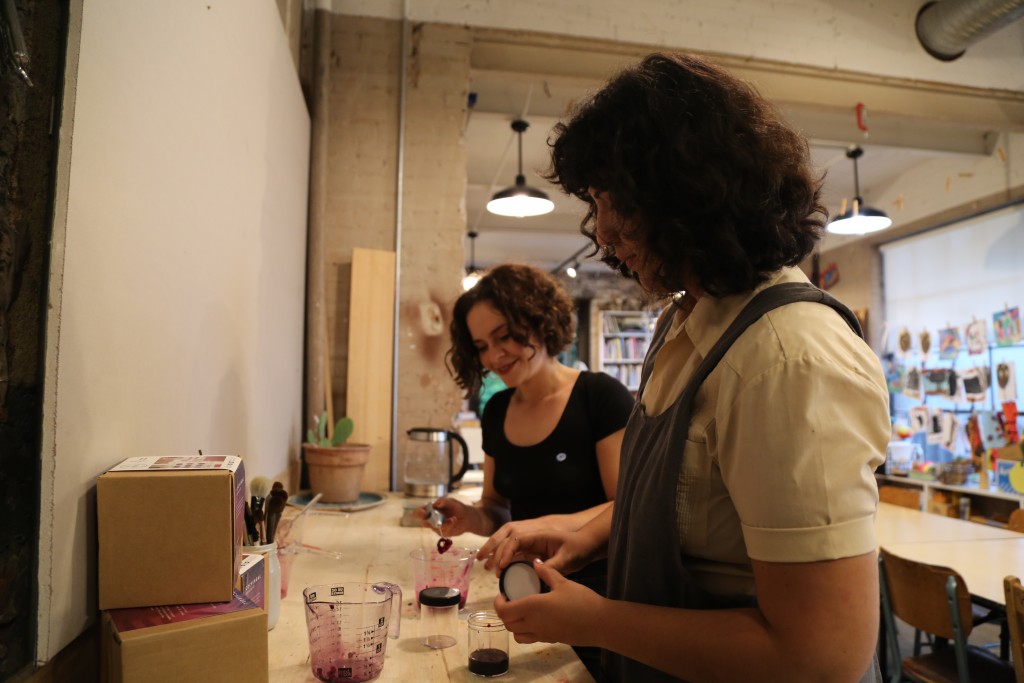 Cleaning up after a dye workshop. Photo: Hady Mawajdeh

Tierra Firme uses a lot of natural dyes. You teach courses around town and you use them in your work. Does working with natural dyes allow for you to more closely capture the colors that you’re used to seeing on the border?

SW: Well, we both became interested in natural dyes because we learned how to use food dyes. We had gotten very excited about how we could get purple from black beans on silk or use hibiscus to dye cloth. We were like ‘WHAAT?!?’ Anyway, that was our entrance. From there cochineal (which is native to the border and grows all across Texas) became our new love. We just became really interested in materials that were connected to the people and the concepts we were creating art about. They have positively impacted our work.

How did you two meet?

SW: We met during undergrad. We were both in a weaving course. And Analise and I were both making work about the border. That was our introduction.

AM: Yeah! I was really interested in her weaving. One in particular caught my eye. It was a shrine – we were really heavy and into shrines at the beginning (laughs) – about Our Lady of Guadalupe. Sarita was the only person in my class who was creating work about Our Lady of Guadalupe and that was pretty powerful as a woman coming from El Paso. But it was cool, because I was looking for someone to share concept conversations with. Your artwork is only going to be as good as the people that you’re in school with. So it was really nice to have someone to share those ideas and conversations with.

SW: You know, I saw a lot of things in her work that made me think of home. She used a lot of imagery that involved Mexican-American rituals. And I was like, “I know all about that!” I was so happy to find someone working in that way. 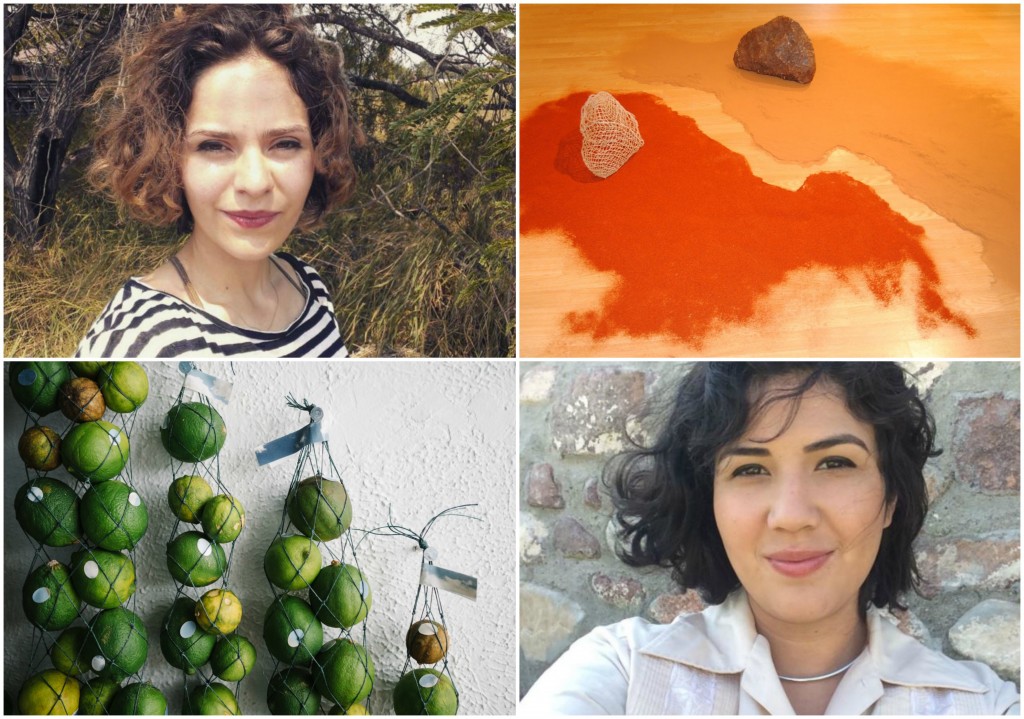 Are you two creatively satisfied?

But I do know that getting to say more and more what I would like to be saying.

SW: I would say that I am creatively satisfied with the opportunities that we’re getting. Because of what we do, we’ve been able to travel and spend time in new locals. We get a lot of residencies and volunteer opportunities that allows us to meet new and interesting people.

What makes Tierre Firme different or special and sets you apart from other visual artist in North Texas?

AM: I think we’re special for three reasons: 1) We respect each other’s individual practices. 2) We’re very interested in the success of our project because we want people to know more about the border region almost as much as we want to create beautiful and impactful art. 3) I think that we are a collaborative composed of two Latinas from different parts of the border who are focused on the positives of the region.

SW: I think our aesthetic sets us apart. This idea of content with textiles being told through installation and natural dyes is very unique. Dyes and other textile practices are usually confined to cloth or whatever. We’re using them in a three dimensional way.