He’s set up new pieces inside 500X Gallery, just a short walk from his West Dallas home, to show interested collectors and curators.

A stick figure made of manila rope covered in viscous, black paint stands in the center of the gallery. 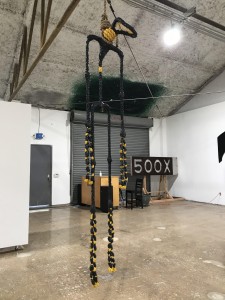 Big wooden slabs covered in the same thick paint hang on the walls. Each one carved into seemingly random shapes.

But, sports car enthusiasts will recognize them as the undercarriages of different Lamborghini models.

“I use Lamborghini as a stand-in for the human body,” Jeremiah said.

The sports car, known for its affinity to bullfighting, is a recurring symbol in his work.

“If there is another perfect beautiful body built for performance that’s also rooted in ritualistic violence, it’s the human body as well.”

Like the car, violence is a theme Jeremiah explores often.

And he throws his audiences headfirst into that conversation.

In February, Jeremiah held a show at the Public Trust gallery.

It included a series of pieces that recast the fatal shooting of five Dallas police officers as a catalyst for police reform.

Micah Xavier Johnson shot the officers during a march protesting the police killings of Alton Sterling and Philando Castile in 2016.

“It sucks that he killed the cops for the reason that he killed him. That’s the mindset of somebody like him: somebody has to feel this s—. So, it behooves everybody to have a real conversation about it in a real way.” 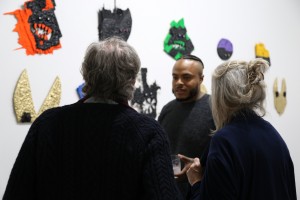 David Jeremiah discusses his artwork with visitors to his show at Public Trust gallery in February, 2020. Photo by Elizabeth Myong.

Some viewers told him the show was “too much.”

“This is just wood, paint, manila rope, spent shell casings,” Jeremiah said. “They weren’t ghost makers. They didn’t put nobody down. I’m making art, fool. That is a very therapeutic, non-violent way to get this s— off of my chest.”

Many conversations about the shooting sidestep Johnson’s motive. He was angry over the police killings of Black men.

So is Jeremiah, and his work bluntly asks audiences to weigh the loss of human life.

This summer, he revisited the 2016 shooting in another installation at the Janette Kennedy Gallery, located across from the Dallas police headquarters.

“So, we have this underground space,” he said. “From the jump, I wanted it to have a morgue, catacomb feel to it. That’s why I manipulated the lights the way that I did.”

Six altars, covered in that thick, black paint he uses, stood in the barely-lit space.

Collection plates sat atop each one, meant for the families of everyone who died on July 7, 2016.

“What you do is come in and either give or you don’t to whoever’s family that you personally feel loss and grief is worth the most,” he said.

The space was open 24/7, giving people the chance to make a contribution in private.

Johnson’s plate received the most money, though each one got donations. Most of it was stolen.

“The amount of money that remained was roughly $13 and there was a little pouch of coins and a Wild Detectives gift card,” he said.

Many of Jeremiah’s ideas started in a pile of notebooks he kept in prison. He spent four years behind bars for aggravated robbery.

“They say one year in prison is like four years of college,” Jeremiah said. “Me personally, I definitely need to sit my a– down and put some muscle on my body and fat on my brain.”

His work, as uncomfortable as it might make some viewers, bears his frustration toward systems that disproportionately punish Black men.

Systemic racism is an ugly thing. Jeremiah believes his work should reflect that.

“Nobody out there can make me feel like I’m being inhumane by productively expressing and channeling one of the most human emotions ever: f—— anger.” 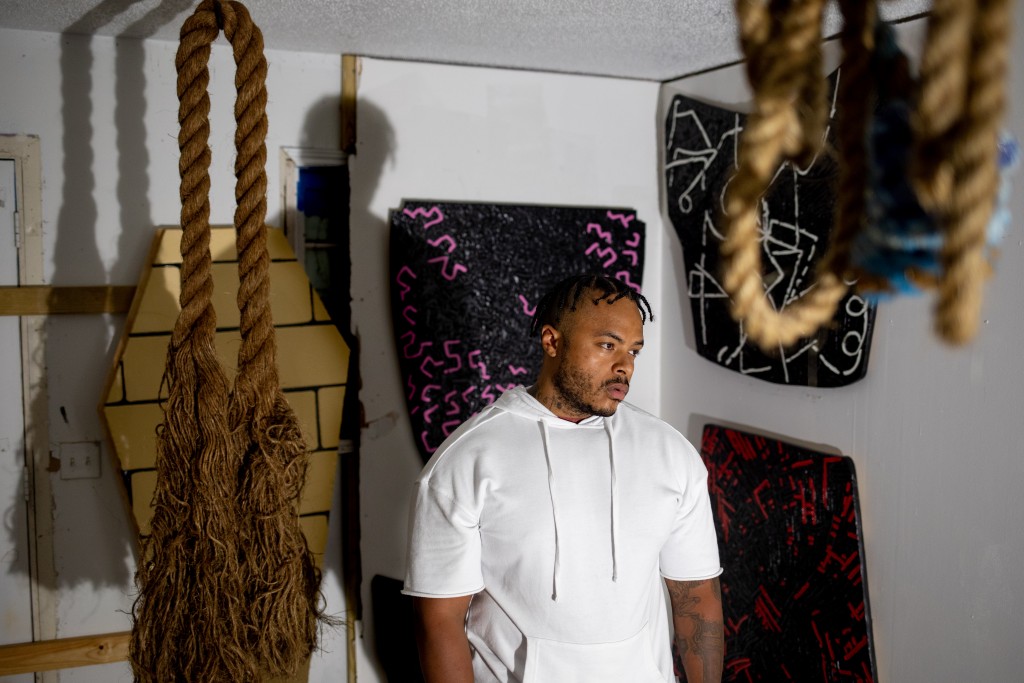 The rooms in David Jeremiah’s West Dallas home are stocked with past projects, paintings and installations. Photo by Keren Carrion.

His art is a survival strategy, and it’s also his redemption in the eyes of the people he cares about most.

“I love him a lot,” he said. “Fear is a constant because the person whose respect I want the most is his, at the end of the day. My art and him are the only things that haven’t disappointed me.”

As long as he speaks his truth, as ugly as it may be, Jeremiah says he cannot go wrong.