Disney Studios recently launched a contest to honor Ava Duvernay, the director of A Wrinkle in Time. They were searching for country’s “Next Visionary Filmmaker.” The winner? A 19-year-old Junior from UNT. For State of the Arts this week, KERA’s Anne Bothwell sat down with Ciara Boniface to find out how she’ll use her $100,000 prize. And what it’s like to meet Oprah. 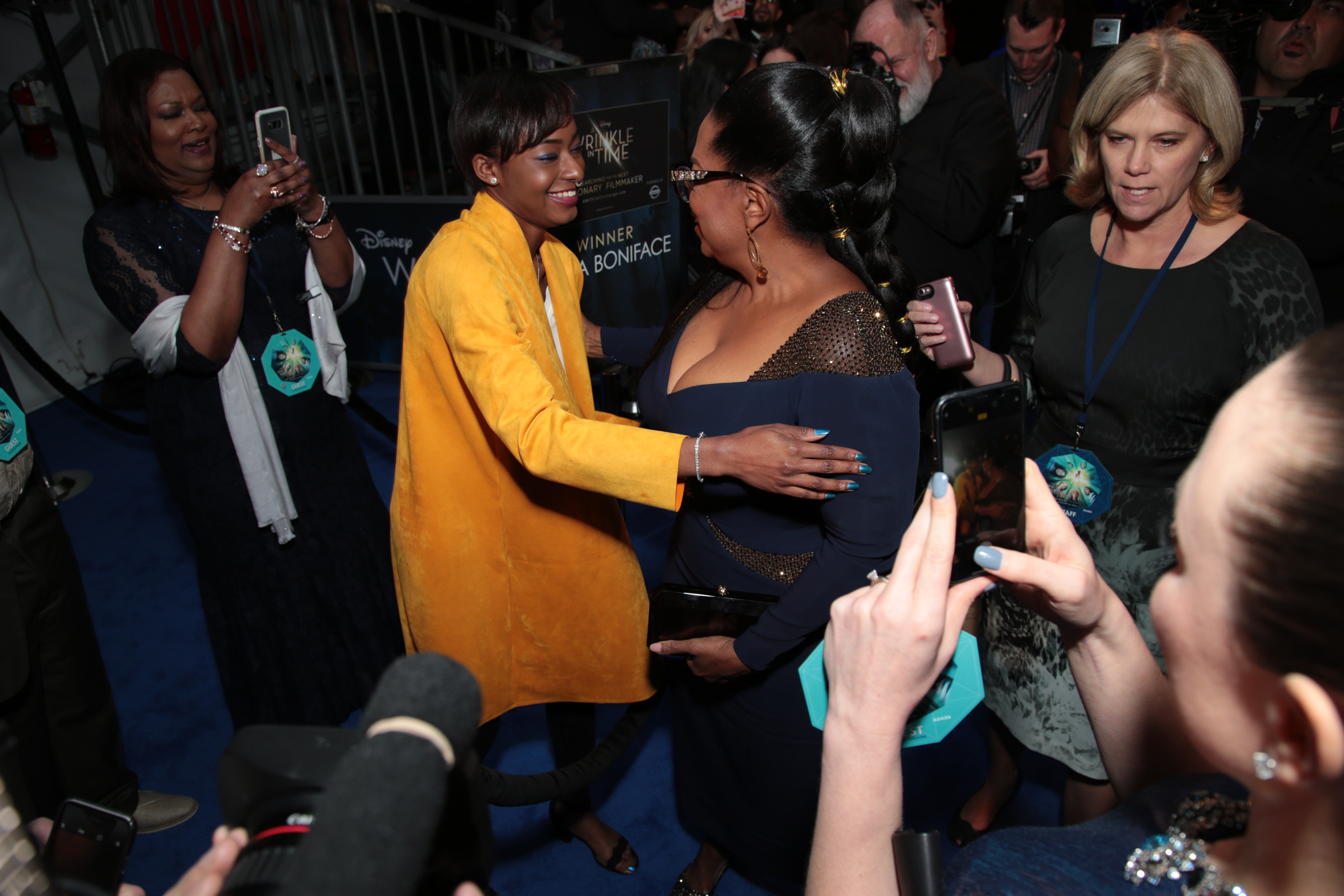 Disney presents the world premiere of “A Wrinkle in Time” at the El Capitan Theater in Los Angeles, CA on February 26, 2018.
(Photo: Alex J. Berliner/ABImages)

Because you won the contest you got to go to the premiere of “A Wrinkle in Time,” so which was more exciting meeting Ava Duvernay or Oprah?

That’s a really hard question because I really look up to Ava a lot, but I’ve also followed Oprah for a long time as well. I guess Oprah just because like, I never would have even imagined meeting her so I think that was just really crazy to be able to see her and hug her she was very nice.

Did I read that Ava Duvernay had been following you on social media?

Yeah! I would send her, at her on some of my work even before all of this happened. She responded to it a few time so it’s crazy to think that she remembers me enough to hand pick me for this contest.

What does she mean to you?

She’s a huge inspiration to me because there’s not a lot of black women in the film industry. I feel like I now have a chance because she’s out here doing all of this and opening new doors. She was, you know, the first black woman to have a $100 million budget and she’s the first for a lot of things actually. That really just inspires me to keep going.

You won $100 thousand what are you going to do with that money?

I’m using it to fund a feature film.

And what’s that film about?

The film is called “Skin Tight” and it’s about a woman where the entire town seems to know about her being stalked and there’s like a deeper meaning to why she’s being stalked there.

But we can’t find out what that is until we see the film.

And you won a car too.

What were you driving before?

I actually didn’t have a car. I actually had lost my car because someone had run into me. My parents were trying to figure out what to do about that so it’s just crazy that this happened.

I actually used it a lot as far as just like my characters, but I’m also writing another film later on that I want to do sometime down the road. It’s like a horror film. It’s about this girl that has to evacuate and her past follows her. I like putting my experiences there because New Orleans has so much culture and so much, so many things that you can tell about it. And my family has a lot of memories there and I have some memories there I was really young but I have some.

I thought I would be one of those people who would have to really start off and push for it and the fact that this happened has helped me so much.  Not only can I fund my feature, but I have people I can ask in the industry already that you know can help me and can help me get my foot in the door a little faster so that’s really crazy that this happened. It’s still really mind-blowing to me.

The name of this contest is the next visionary filmmaker is that a lot of pressure?

Yeah like, when I was there and you know they would mention me winning an Oscar and all this it was almost kind of like, a lot of pressure as far as I really gotta make whatever I do next has to be really, really great. I mean I have confidence in it but it’s just very like it’s really crazy that all these people are watching now.

In celebration of @Disney‘s #WrinkleInTime and its visionary director, @Ava, @DisneyStudios & @NissanUSA launched a nationwide search for the next visionary filmmaker! Watch to learn about the one lucky winner! #FemaleFilmmakerFriday✨