Soon, new works from Dallas artists Jammie Holmes and Oshay Green will be hanging on the walls of the Dallas Museum of Art.

Listen to the Art&Seek feature on Jammie Holmes.

The DMA has announced the acquisition of three works from the artists that’ll be featured in “To Be Determined,” a new exhibition opening September 27. 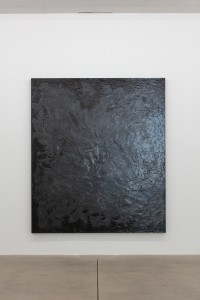 Green’s bold new piece is made of cement, black pigment, and resin on canvas. Green had his debut solo exhibition, “Members, Don’t Git Weary,” at And Now gallery earlier this year.

The commissions mark Vivian Crockett’s first acquisitions since coming to the DMA. The assistant curator of contemporary art joined the museum in March.

Crockett said the new works reflect on Holmes’ childhood memories of growing up in Thibodaux, Louisiana. “Four Brown Chairs” and “Tired” both depict scenes from the day of his cousin’s funeral.

“Both paintings work on their own, but something really powerful happens when you see them juxtaposed with each other,” Crockett said. “So much of Jammie’s work is this temporal play. The fact that he’s painting from his present moment, but always referencing his childhood memories and his roots in Thibodaux.” 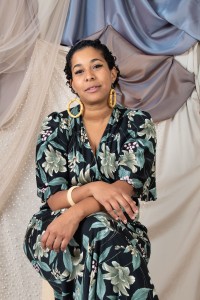 Like many of Holmes’ paintings, the works center Black lives through the lens of family, religion, and tradition. He also explores deeply painful subjects: systemic racism, poverty and police violence.

In May, Holmes pivoted away from painting. After police killed George Floyd in Minneapolis, Holmes had planes fly banners with Floyd’s final words across the U.S.  It was both a celebration of Floyd’s life and an act of protest.

It’s that depth of experience Holmes embraces which draws Crockett to his work. Widespread interest this year around conversations about systemic racism and police violence have only made that work more salient.

“For some people, this moment is a shock,” Crockett said. “For me, it feels like this moment is symptomatic of conversations we’ve been having historically about our systems. I think that complexity is really important. Things aren’t always only horrible or only great. There’s nuance there. I appreciate that Jammie brings that to his work. The sense that one can continue to survive systemic oppression, but there’s also resilience there.”

Crockett also points to Holmes’ complex depiction of Black masculinity, which is rarely fully represented on the walls of art museums. In “Four Brown Chairs,” four Black men share a moment of intimacy.

Thrilled to share that 'Four Brown Chairs' is now in the @DallasMuseumArt’s permanent collection.

“He’s not scared to explore the range of emotions that all of us have,” she said. “You see happiness. You see desperation, sometimes. A sense of sadness, togetherness, solitude. All the different ways we exist in the world as complex beings.”

At a moment when institutions are figuring out how to approach the so-called “moment,” the DMA has chosen to commission works from local Black artists. Crockett says that’s a big deal, especially for an institution that doesn’t necessarily have a reputation for being on the cutting edge of contemporary art in North Texas.

“This is an assertion of the importance of Jammie’s work within this moment, but also beyond this moment, before this moment, after this moment,” Crockett said. “I think it’s an exciting moment for the DMA to be thinking about its relationship to the local communities that the museum is within and how that enriches the conversation with other works in the collection from artists all over the world.”