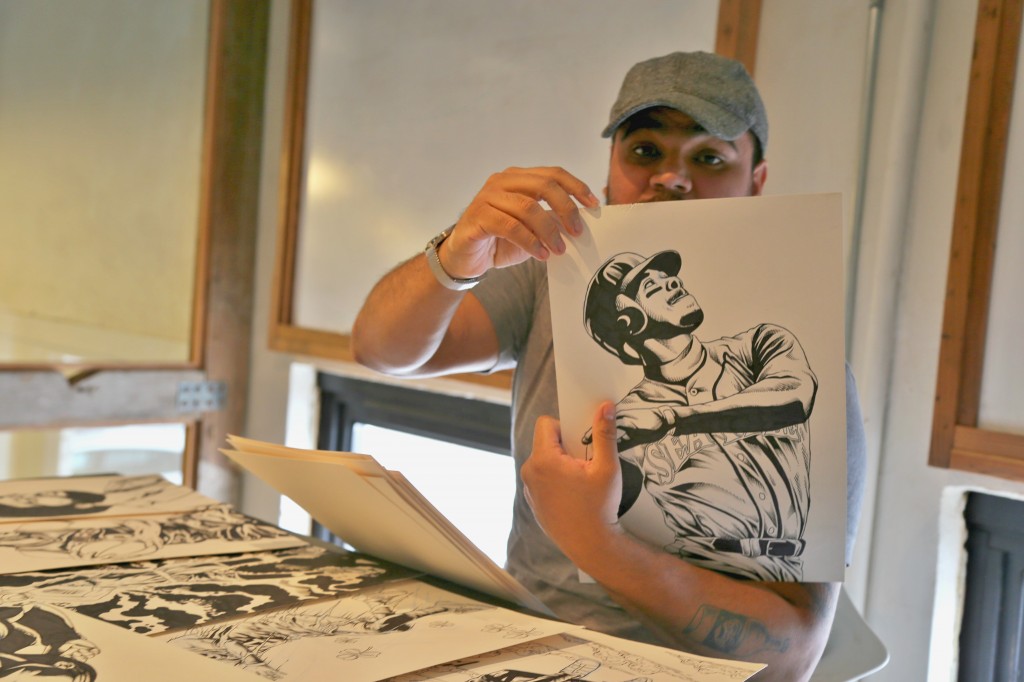 Illustrator Arturo Torres showing off some of his original drawings.
Photo: Hady Mawajdeh

What’s the best rap song of 1984? How about 2004? Tough question, right? How about this: what would an NBA game look like if a grizzly bear were starting at power forward? These are the sorts of questions that Garland native Arturo Torres brings to life. In this week’s Art&Seek Artist Spotlight, Torres shares the story of how he transformed from aspiring artist to illustrator of two New York Times Best Sellers. 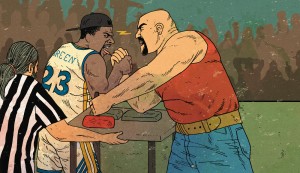 NBA star Draymond Green takes center stage in this ‘Over The Top’ illustration by Arturo Torres.

Torres has drawn everyone in rap and basketball. His comic-book style portraits get shout outs from LeBron James, Kobe Bryant and Chance the Rapper.

The 27-year-old’s art is featured on ESPN’s Grantland and The Ringer. Nike and Google hired him to design interactive murals. And he’s illustrated two best-selling books.

But fame, money and accolades are simply part of a larger goal.

Chicago hip-hop artists Chance the Rapper and Kanye West make quite the pair in this retro-looking illustration by Torres.

“The thing is, like for the longest time I was just afraid of becoming my neighborhood or like becoming like my father,” Torres explains. “And so, my thing that I had in life was I wanted to change the definition of my last name.”

These feelings trace back to his childhood.

“And so in the neighborhood that I grew up in, what does ‘Torres’ look like? If you were to ask somebody, it’d be like ‘Oh. It’s a broken home. It’s an alcoholic father. It’s a single mom.’You know? It’s that,” he says.

As a kid Torres was constantly surrounded by conflict. Outside his home, he saw neighbors selling drugs and getting into fights. And things weren’t better inside either.

“I began drawing as a way to escape because there was domestic violence inside my house,” says Torres. 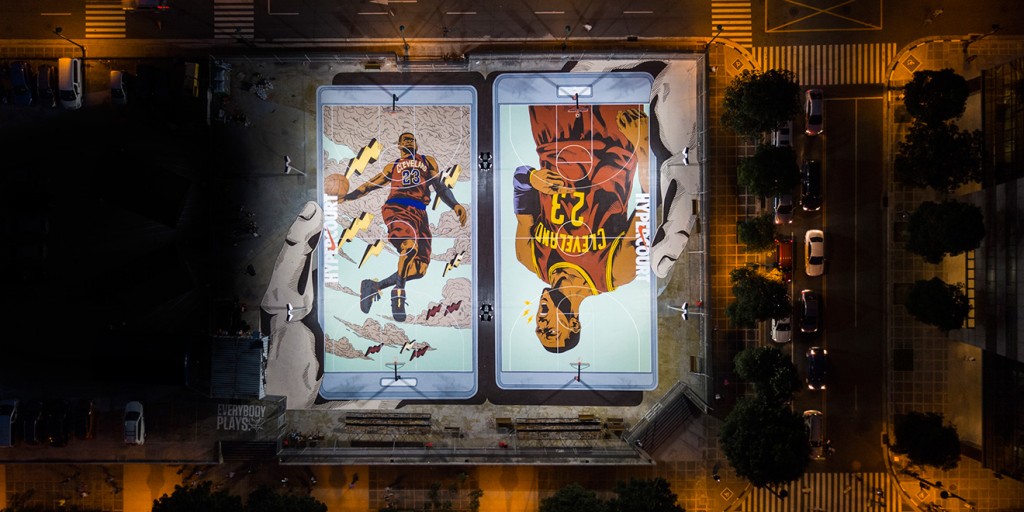 These Nike Hypercourts were illustrated by Torres. They’re in the Philippines and interact with smartphones, so kids can practice the same drills as stars.
Photo: Nike

In the beginning, his drawings started off pretty simple – Mickey Mouse and other children’s characters. But then, Torres turned his attention to comic books.

“It was one of those things where like, I would use it to ignore everything that was going on” he says. “[I was] just replicating comic books. If I didn’t like the ending to a comic book, I would do the whole thing from scratch and change the ending. Sometimes the villain would be my dad and Spiderman’s rescuing us and stuff like that.”

Eventually, Torres’ family moved to a shelter for domestic violence. And art became an even bigger outlet.

“My counselor saw that that was the way I was coping with all of this. So she saw that and she encouraged me,” Torres says. “She bought me like my first set of art supplies, so like definitely shout out to Genesis, because they’re the reason why I draw.”

Torres saw art as a way toward a better future. But he says even his own family had a problem with that.

“If you’re in the hood, man, and you tell people ‘Oh. I don’t want to live in this place anymore.’ They’re like ‘What’s wrong with this place?’ You’re seen as an outcast. Like, “Oh! You think you can be better than this? You think you’re better than everyone else?,” says Torres.

Torres figured he could stay put or he could hustle.

“He literally was a starving artist for a good while,” says Julio Mendez. Torres and Mendez are best friends. They’ve known one another since they were 11 years-old.

“Back in the day, he and I used to just do art in my house. And then, we’d find an event. We’d drive to it. Make 200 bucks. And then that was it. I mean that was kind of the start of everything,” Mendez says. 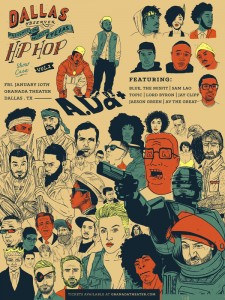 An old flyer for the Dallas Hip-Hop Showcase. Illustrated by Torres.

Torres sold work at art fairs. He made illustrations for online magazines. And he designed flyers for musicians. One of those flyers ended up changing his life.

“I came upon a flyer he did for this group called The Outfit, TX,” says Shea Serrano. Serrano lives in Houston and writes about sports and pop culture. At the time, he was looking for an illustrator for ‘The Rap Year Book.’ “I knew whoever drew the flyer was the person I wanted to ask to do the book.”

Last year, they partnered again on Serrano’s “Basketball (And Other Things).” Once again, it’s a best-seller. But Serrano says Torres has an even brighter future. 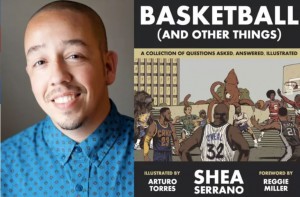 Shot of Serrano and his most recent book.

“I think he’s one of the best working illustrators in the country. We will eventually get to a point where everybody starts to recognize that,” Serrano says. “Even now, the difference between ‘The Rap Year Book’ and the basketball book, like has increased tenfold.”

That makes Torres smile. He’s one more step closer to redefining his name. But he’s not satisfied. He wants to draw his own graphic novels. And he wants to start a family.

He’s got his future sketched out. He can see it. But he’s still has to color it in. 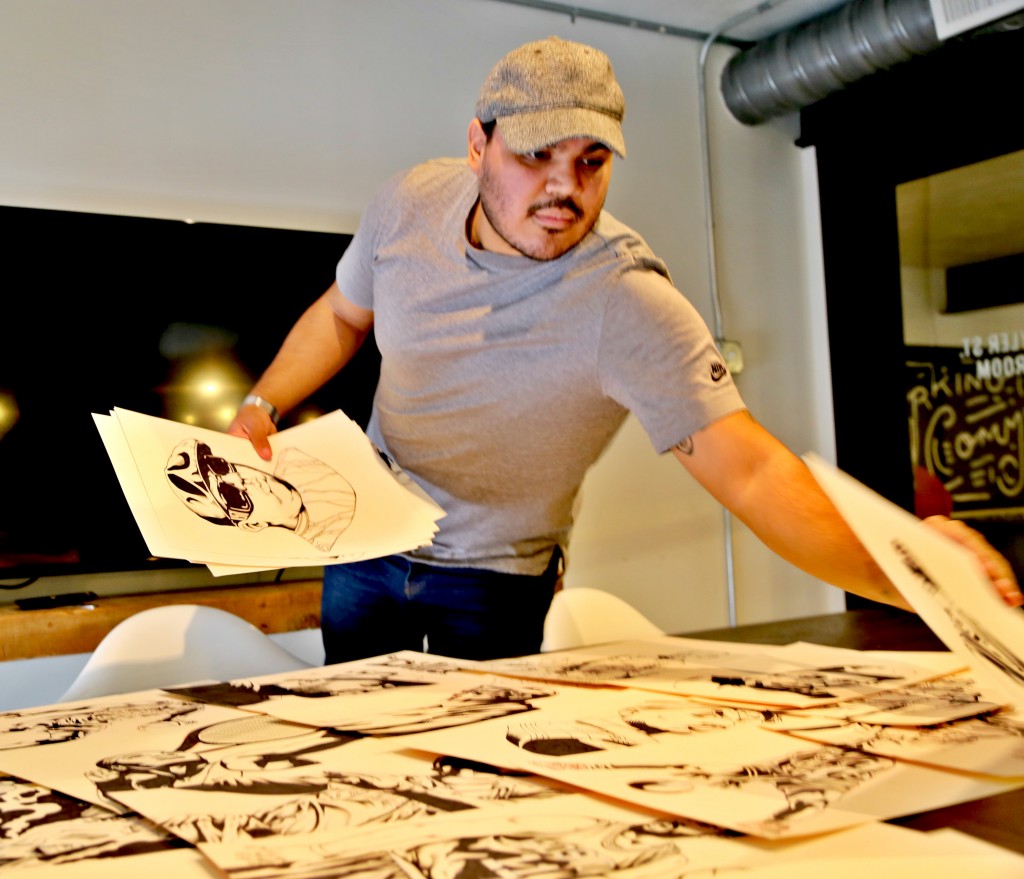 How has North Texas affected the production of you art?

I don’t think it has. Being an artist in Texas makes me proud, but I don’t think it’s affected my production at all. I draw at home, so the region’s not changing anything. 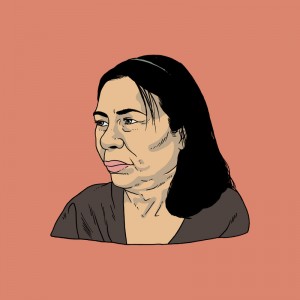 An illustration of Arturo Torres’ mother. She passed in 2016.

What have you had to sacrifice to get where you are in your career?

My family was really angry with me for pursuing a career as an artist. The way I was raised – the way a lot of Mexican families are actually – when you graduate from high school, you need to get to work. So when I told them I was going to draw, they were like ‘What do you mean? That’s not a real job!’ It wasn’t until they started seeing my name in newspapers or my drawings in articles that they were okay with everything. But that took several years.

I’m glad that it all happened for me before my mom passed away. I’m proud that she was able to see the stuff.

I gave her “The Rap Year Book” when it was published. And she gave it back to me though. She said, ‘Give it back to me when it’s in Spanish.’ But then she passed away before it could be translated to Spanish. That bugs me. I hope it’ll be turned into Spanish. I’ll go to where she’s buried and I’ll put it there for her. That’s a goal. I hope it happens. I don’t have any control over that though.

That’s a pretty big personal sacrifice. Was that the only thing you had to give up? 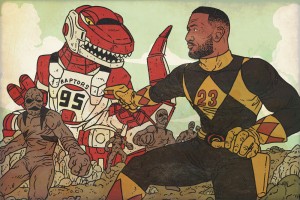 Torres’ drawing of what it would look like if Lebron James were a Power Ranger.

I had to sacrifice a lot, man. It’s one of those things that I draw so much and for so long that I don’t really go out all that much. I give all that up, so that I can be better at this.

But I could always see the bigger picture. Like there were certain relationships with people that I couldn’t hang out with because I was working.

If you’re going to be serious about drawing, you’ve got to make some sacrifices. A lot of them.

I sacrificed friends, family, time with my fiancé and my neighborhood. I had to let go of it, so that I could get here.

Who are some of your influences?

Besides your hair and beard? (laughs) Your hair is luscious, bro. I’ve been staring at it the whole time we’ve been talking. You can surf on your waves. (laughs)

Thanks. I get that a lot. People are inspired by my hair. But we just met, so tell me about your earlier influences.

You’re not my influence anymore. I have a lot people who I look up to. Like the owner of Common Desk. I had never heard the word entrepreneur until I worked for him a few years back. He owns four locations, staffs a dozen people and he owns a coffee shop. When he opened the first Common Desk, he was sleeping on an air mattress inside the building. He would get up early and clean and work all day. At the end of the night, he’d be sleeping in his work. And now it’s a big deal. He’s got a lot of passion and he’s one of my inspirations. 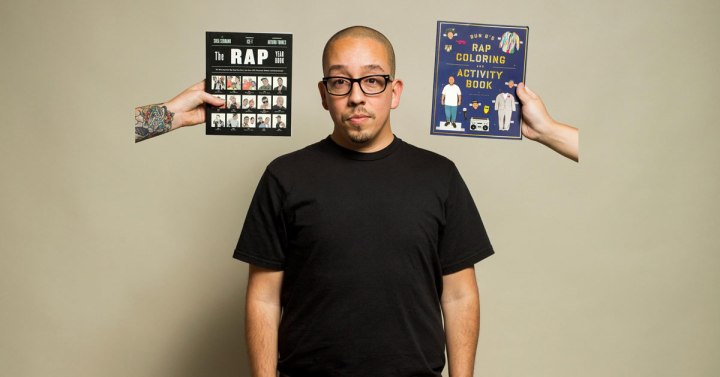 Shea Serrano is the author that Torres has collaborated with on “The Rap Year Book” and “Basketball (And Other Things). Photo: Shea Serrano via Facebook

Then there’s Shea (Serrano). He’s been – I look up to that dude a lot. A lot of my success has been because of that dude. And he has a vision for me. He knows my value, he makes sure I get paid and get taken care of. And he’s trying to make sure I reach personal goals. I mean, dude needs to be taking care of his family and work. He doesn’t just do that though. He calls and checks up on me. And just the way that he is with strangers. He cares for people. 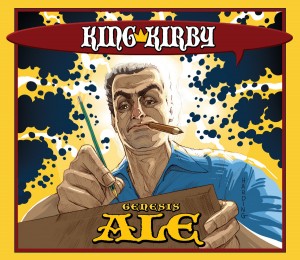 Artist Paul Harding’s take on Jack “The King” Kirby, which is featured on the special-edition beer brewed for a Kirby Day celebration at Schmaltz Brewery in Clifton Park, N.Y.
Photo: NPR

When I first saw your work I thought it was like street art. But then I saw all of the comic book style stuff. Who influenced your art?

Jack Kirby. He’s dead, but I still look up to him. I actually look at his artwork all the time and I’m like, ‘Damn! I’m still not as good as him.’

Kirby is the illustrator behind all the Marvel Comics, right.

Yes! And it bugs me that he doesn’t get the credit he deserves, especially in the Marvel Cinematic movies. He’s only now starting to get some credit. People just look at Stan Lee and they think he did it all. But Stan Lee basically stole from him. He takes all the credit and he’s never been like, ‘Jack did this all with me.’ 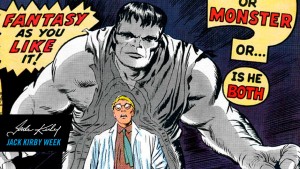 Do you have a favorite comic book or character?

What makes you different or special in comparison to other artists or illustrators?

There are a lot of people who are better than me. I just work harder than them. Am I great? No. I’m not as fast as other artists. But I hand draw everything, so it takes me longer. And I think I think that people can appreciate that. They can see there’s a human being behind my drawings. 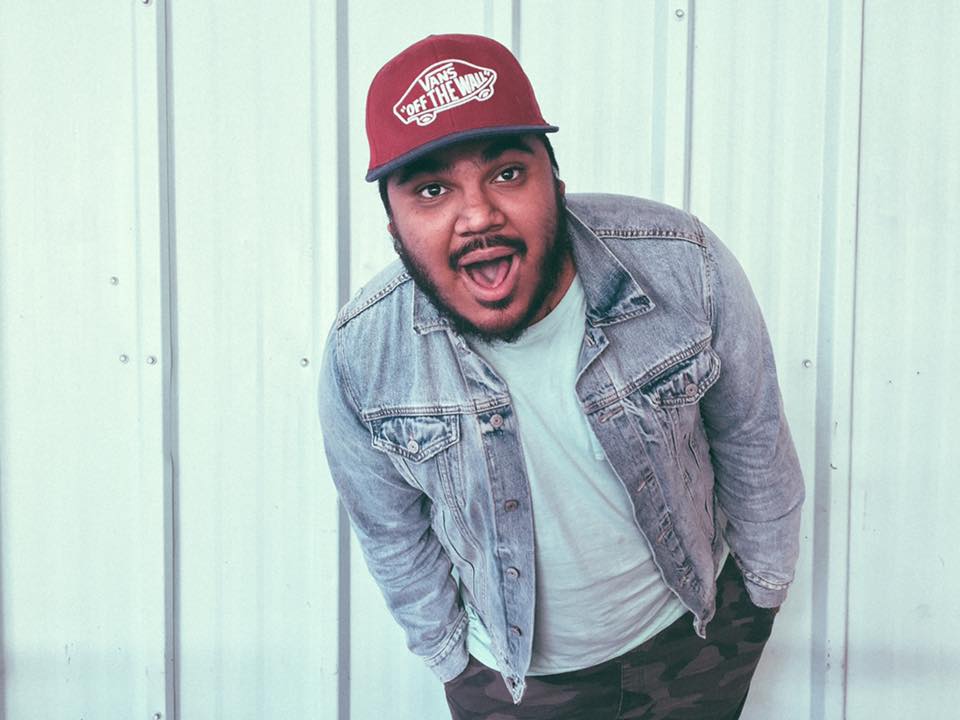 Just from chatting with you and hearing about some of your inspirations, I think that you’re really all about work ethic. Like you can appreciate natural talent or whatever, but you appreciate hard work even more.

People may find reasons to dislike that stuff. But my work looks good. And it looks good for a reason. I work hard.