“Frame of Mind” takes you deep into the city this week with “Bonton + Ideal,” filmmaker Craig Weflen’s exploration of two neighborhoods in South Dallas as part of “Films from bc Workshop.”

In the film, Weflen tries to look past a glossy history of Dallas as a growing metropolis to neighborhood-focused stories that may be less pleasant — but no less important to understand. Bonton and Ideal, though unique, reflect challenges faced by neighborhoods throughout the whole American South, he says, from divisions created by freeways to concerns of floods and bombings. 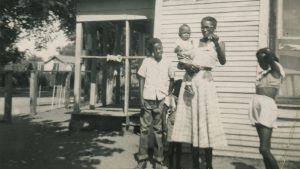 “We didn’t have a playground,” says Eather Ingram-Watson, who still lives in Ideal. “We made our playground in the street and the yard.”

Weflen explores the various factors that influenced the growth of the neighborhood, many completely out of the control of its residents.

As Dallas became a thriving trade center following the arrival of the railroads in the early 20th century, a number of rich, Jewish merchants moved into mansions in South Dallas areas. When they needed cheap labor for service and upkeep of their mansions, they hired African-Americans.

The workers were relegated to undesirable sections of South Dallas, along rail lines or in the flood planes of the Trinity River. As the population grew, the city set aside a large area on the confluence of the Trinity River and White Rock Creek, as well as a hog and calf farm that belonged to a man named O. E. Taylor.

This area, vulnerable to floods and segregated from white society, became what we know today as Bonton.

After World War II, many African-Americans who had served returned from the war and decided to move to nicer neighborhoods than their pre-war homes. There had been several bombings in the area before, one in 1929 and three in 1941, but 1950 brought an unprecedented spate of attacks on African-Americans.

“You started having bombings over South Dallas,” says Reverend Gerald Britt, the founding leader of Dallas Area Interfaith, in the film. “People would buy houses and the next night somebody would throw dynamite into their house and blow up their house. Bringing that fear.”

In February 1950, a bomb exploded in the bedroom of a family home. In May the same year, dynamite blew the roof of a house. The next month, a house was bombed the day before an African-American family moved in.

“They lived through it,” says Britt. “Eventually it stopped.”

As the neighborhood was developed specifically for African-Americans, the land was undesirable — in large part because of the potential for floods. In 1989 and 1990, two huge floods devastated the area. With no storm drains, there was nowhere for the water to go, and many waited out the disaster on their rooftops. 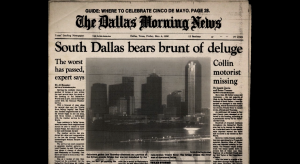 Without the money to rebuild, and lacking insurance or unable to make a claim, many residents simply moved out, abandoning damaged houses and property.

After the second flood, the city finally consented to spent $13.5 million on a levee. The 20-foot tall barrier was erected in 1991, almost 80 years after the initial development of the neighborhood in its flooding-prone space by the Trinity.

“Neighborhoods are the most fundamental way people organize themselves in the city,” Weflen said to Art&Seek when the film first aired on “Frame of Mind.” His organization’s mission is to build better and more equitable cities, and the neighborhood is a building block, but it’s only possible to understand a neighborhood through its inhabitants. He says he asks interviewees what makes their neighborhood special, and all the residents of Bonton and Ideal responded: “the people.” Weflen thinks that’s a result of outside forces that tried to isolate the community during its development.

“The folks were forced to rely on each other during the time of segregation when you couldn’t shop anywhere outside of your neighborhood,” says Weflen. “When that went away, those social ties still remained, and they grow stronger from generation to generation. It’s a really close knit community.”