Arte y Pan Dulce (sweet bread), an art show in East Dallas last weekend, was organized to create a platform for artists of color and a place where artists who have been marginalized can find an accepting audience.

Susana Edith and Mariah Garza curated the show. Many people of color feel threatened in the current political climate, says Edith.  But there is a positive side to that. Now more than ever, she said, artists and others are asking for ways to get involved and support one and other.

I talked to five artists at Pan Dulce about their work, their challenges and the importance of safe spaces. 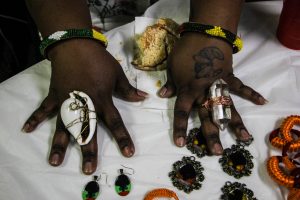 Ellis is a mother and a jewelry maker. She wore two intricate rings that wrapped around her two middle fingers made of wire-wrap and shell. On her table, she displayed hand-painted jewelry that featured silhouettes of black women. Ellis said after the election she wanted her art to focus on the black community and safe spaces like this show gave her the opportunity to do that.

“It is kind of exhausting to explain yourself, or put on a mask, to soften yourselves for other people’s palate. And then be the caretaker of their feelings if they’re not understanding who you are when you correct them on certain things. That’s exhausting. So we need space, it kind of recharges your battery. You’re not tired out, you’re not exhausted. I don’t have to explain myself.  They get it. That doesn’t mean I exclude anybody. As well as I walk into white spaces, they can walk in here too. But we’re not going to hold your hand through it.” 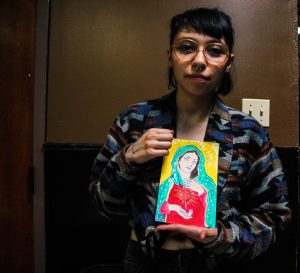 Zuniga identifies as non-binary, pansexual and Mexican-Irish.  Zuniga makes zines about the abusive relationships, both in childhood and adulthood. The cover of one zine features Virgin Mary, because it represents the innocence Zuniga felt at the time of the abuse. Zuniga’s first language is Spanish and so are the zines. It feels more like home.

“When it comes to who you want to be in life, your sexuality, figuring yourself out…I try to reach out to the masses in my work to let them know that there’s other people that have gone through that.” 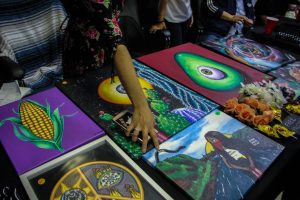 Kuatli is Mexican but doesn’t care for various labels for herself. In one of her paintings, she depicts a  young Native American girl being protected by her mother at Standing Rock.  Kuautli drew from her experience protesting the Dakota Access pipeline there. Kuautli said as a Mexican, her indigenous roots make her feel a kinship with Native Americans. “They’re like our people,’ she said. 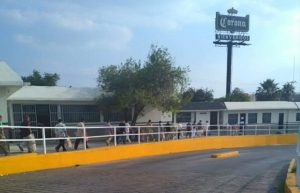 Plancarte is a Dallas activist, photographer and a member of Mueve, an activist group for the latinx community at UNT. She said that especially during a time of charged rhetoric around immigration,  she wants to show the beauty of Mexican people and challenge perceptions of Mexican immigrants. She shot her photo Los Deportados, The Deported Ones, as she crossed the border into the US and saw others returning to Mexico. The picture, she says, is an attempt to humanize the immigrant experience.

“You always hear of people getting deported,  but when you see actual people being deported right in front of you, you can feel their “American dream” and the chance of having a better life shattered,” Placante said. “It was also a bit ironic, because in the picture there is a Corona sign that reads bienvenidos [welcome].”

Chilomé is Mexican-Salvadorian and likes to go by the term  “indegina a mestiza.” It indicates her Spanish and indigenous roots without erasing indigenous culture.  She describes her poetry as having deep roots in indigenous tradition. Her influences range from family history, and life as a queer women of color to hip-hop and east coast culture.  She questions white privilege in her work, which sometimes leads to her being asked to leave the stage.

“This work is activism  Because it feels like when you’re on the front line,” Chilomé said.  “You build up a stamina. But you’re grounded in something much longer than that awkward situation.”