You’ve only got two more weekends to catch Fernando Arrabal’s The Architect and the Emperor of Assyria— Fort Worth Community Art Center’s newest production.

The Architect and The Emperor of Assyria, Weekends through May 29, 1300 Gendy Street, Fort Worth, TX 76107, Details

This latest endeavor brings back live theater to the Center with its second in-person production since the pandemic. It’s also written in the unique style known as the ‘theatre of the absurd, ’ a method that leaves behind conventional dramatic storytelling and illustrates the absurdity of human existence in a meaningless universe by bizarre or fantastic means. 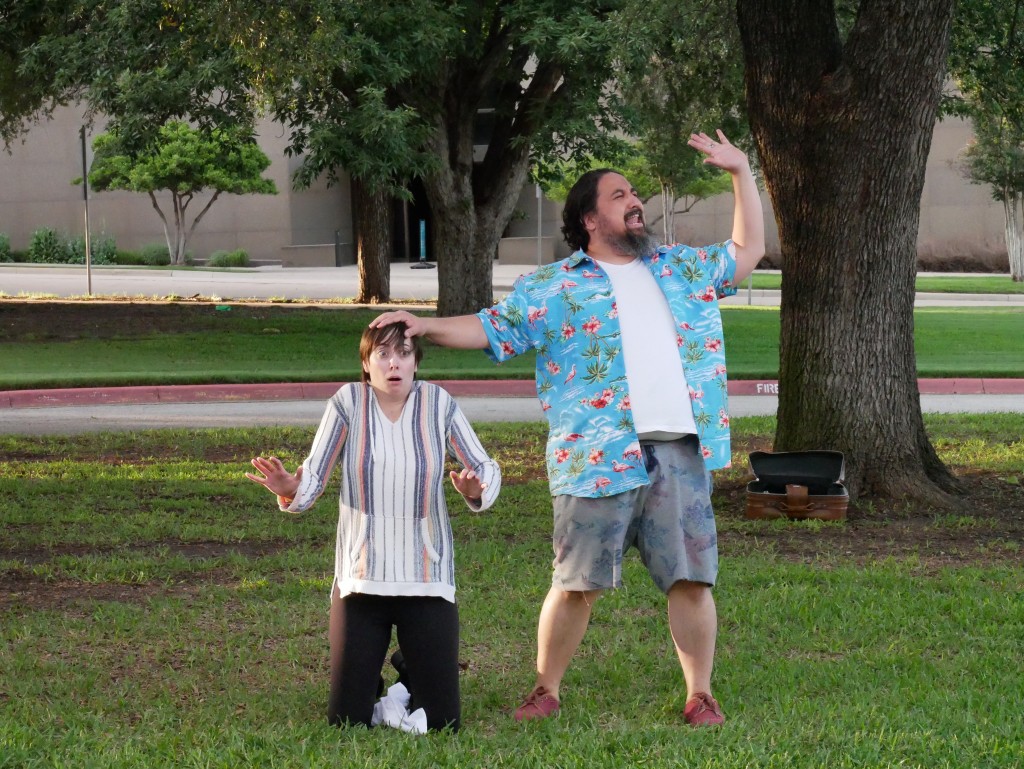 Meagan Harris and Shawn Gann perform the title roles in FWCAC’s production of ‘The Architect and the Emperor of Assyria.’ Photo: Fort Worth Community Arts Center

The show, directed by William Pigg, features just two characters: the Emperor, played by award-winning actor Shawn Gann and the Architect who is played by Meagan Harris.

The Emperor, who is from the modern, Western world, crash-lands on a remote island and meets the Architect, its only inhabitant. The bombastic Emperor spends two years trying to civilize and educate the Architect whose only knowledge seems to come from the the island. The Emperor is unnerved and intimidated by the Architect’s strange and mysterious connection to the island and a struggle between two complementary aspects of human nature ensues.

The production asks the audience to question ideas about morality, justice and civility. And although Arrabal wrote this play nearly 60 years ago, modern themes of isolation and anxiety will resonate.

“It’s extravagant,” said Arts Center Director, Marla Fleischmann Owen. “There’s lots of emotion, comedy, very intense drama and so you go through this range of emotions with the characters. Until you get to the conclusion, and it’s kind of a surprise of the ending, so you get a little bit of everything.”

All the shows take place outside outside on the lawn of the center to allow for social distancing. Patrons are encouraged to bring blankets, picnics and spread out on the lawn. And don’t worry about rain canceling the show. This is a rain or shine event. In the event of inclement weather, the production will move indoors to the basement space of the center.

Remaining performances are Saturday, May 22 at 7:30 and Friday and Saturday May 28 & 29 at 7:30. For more information or to purchase tickets visit www.fwcac.org.