The fourth episode of “Frame of Mind” takes us west to Motley County in West Texas and the town of Matador — captured on film in the 2016 documentary “A Line in the Sand.”

Don’t miss the fourth episode of Frame of Mind Thursday at 11 p.m. on KERA TV

In 2011, Colorado-based filmmaker Marianne Leviton was in the midst of a project — a series of short films for Matador’s historic jailhouse — when two massive wildfires moved through the drought-stricken region, burning thousands of acres of land and killing livestock.

Leviton, who had started to develop a deep appreciation for the ranching community, saw the potential for a full-length project. For two years, she documented the town’s economic and environmental hardships — and their tenacity— after the fires.

We talked with Leviton about the film and her affinity for this Texas town.

Were you in Matador filming when the fires came through?

I wasn’t, but I happened to call Carol Campbell, the director of the Friends of the Historical Motley County Jail, the day the fires were going on. I didn’t even know it. I was just calling to check in with her. She said, Marianne? Matador’s on fire! 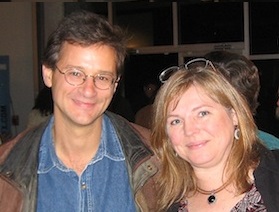 I couldn’t really conceive during our phone call what it really meant. It wasn’t until later when I got more stories and started seeing photographs of it that I got the whole picture. It was really a horrible fire.

What first attracted you to Matador?

I come from living in suburbs, and I spent most of my life on the East Coast in suburbs. I’d never been to a rural area like West Texas. When I went down to start preparing to film for the short documentaries, it was the first time I went through the town. You could drive through it in the blink of an eye. So many of the businesses were boarded up … I couldn’t believe there was even a story here. This place was just dead.

It turned out to be one of those lessons where you don’t judge a book by its cover. We started peeling it back, and there was still a thriving community there.

There are still 80-year-olds mounting their horses and ranching and climbing into combines. There are children there, and they play football and compete in spelling contests … It was no different from any place else in the world except it’s small and maybe a little rough around the edges.

Another thing that intrigued me was how these people had been there for five or six generations. That was something that was totally alien to me.

Were you able to connect with the community?

The town welcomed us. They were so warm to us. Carol Campbell is my line producer, and she sparked the beginning of all of this with those short documentaries … She would suggest people to interview, and I think the fact that she set the interviews up lowered people’s guards. I’m not sure how far I would’ve gotten or how engaging the interviews would have been if I just rolled into town.

I’m so glad that one of the ranchers called Carol and said, Carol, they got it right. So, I think people that live in these kinds of communities are familiar with it and they responded because it’s familiar.

One of the themes in the movie was the desperate desire for the decision makers who don’t live in rural communities to think about what effects their political decisions actually have on the people themselves. The themes of community are easy to pick up on and respond to … the economic and environmental stresses were really obvious too. It was more subtle to think about how signing something into law affects people in densely populated areas and sparsely populated areas differently.

There’s an internal struggle I have … There’s only so much you can do, and as much as I enjoy preserving stories, I do struggle with whether I should move into more political realms that should be addressed. There’s still a lot of value in preserving stories. They’re inspirational and people can always use an escape. So, whether I want to get on my soapbox and do documentaries that will educate people about an issue or just trying to buoy people up and give them hope and inspiration by collecting stories that would otherwise disappear forever. I think there’s value in both types of documentaries.