This week on “Frame of Mind,”we’re celebrating Mark Birnbaum’s career.

Birnbaum has worked as a filmmaker in Dallas since the early ’70s, and in Baltimore before that.  From the backwoods of Alaska to the political fever-pitch in 1990s Nicaragua, Birnbaum’s camera lens has captured the breadth and essence of humanity.

“Frame of Mind” airs Thursdays at 10 pm on KERA TV

From his documentaries, we’ve learned about the Texas town drug-testing all its children, and the man who stopped it (“Larry v. Lockney”); the decline of newspapers (“Stop the Presses”) and the rise of Tom DeLay and his controversial redistricting plan (“The Big Buy”). We’ve met Cuban artists and Catholics around the world. (“The Faithful Revolution: Vatican II)

This episode, “The World Through Mark Birnbaum’s Camera,” is a composition of selections from Birnbaum’s body of work, beginning in Vietnam and ending with footage taken at the memorial for the officers who lost their lives this summer in the Dallas shooting. I sat down with Birnbaum at KERA on an overcast Friday morning to talk about his career as filmmaker.

When was the first time you remember picking up a camera?

I came to photography through still photography, and I learned still photography and darkroom work at summer camp in Maryland. That magic stuck with me. My father was a commercial artist at an ad agency in Baltimore; my sisters were artists. Everybody in my family could draw except me. I couldn’t draw worth a damn, and I kind of picked up the camera as self-defense, to find a way to express myself visually.

I was a photographer in high school and in college, then in the army, in Vietnam. I was a photographer with psychological operations, propaganda, in the Vietnam War, and they asked if I could make a film, and I said, ‘sure.’ And I figured out how to load the camera, and made a short little propaganda film, black-and-white and silent, me directing through an interpreter in Vietnamese. So that was my first film. 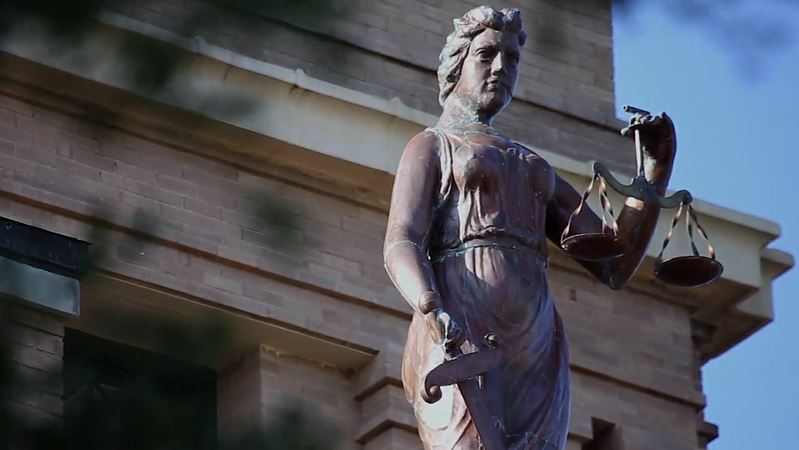 A still from “Lady Justice Returns,” Birnbaum’s film about the restoration of the Navarro county courthouse.

When I got out of the army, I printed up a portfolio of images that I had shot in Vietnam, kids and streets scenes. I only got shot at once the whole year, so it wasn’t a combat experience for me. So I had this portfolio of black-and-white and some Kodachrome images from Vietnam, and I went around to art directors around Baltimore trying to get a job as a fashion photographer. I thought that was my calling because it really looked like fun. 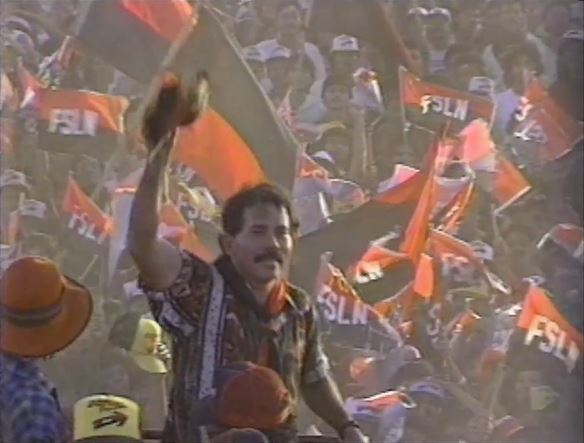 Still from “Free and Fair?” Birnbaum’s film about the 1990 Nicaraguan election.

That went nowhere, and I wound up talking to my sister whose college professor said, “there’s a job opening at the Maryland center for public broadcast for filmmaker.’ And I said ‘I’m not a filmmaker.’ And he said, “Lie.’”

It was great advice.

I went to the Maryland center, the guy in charge of the film center gave me an Arriflex and two hundred-foot rolls of film and a tripod and said, ‘Go up to western Maryland; there’s a fishing tournament. Make a little film about that for me.”

I said, fine, went from there to the library to get an American Cinematographers’ manual to figure out how to load the camera, which I had no idea how to do, borrowed a light meter, went up to western Maryland, shot this fishing thing, came back and got the job, and that was my beginning in public television. That was 1970.

We were shooting everything from costumed Maryland history dramas, to straight up documentary, and that was film school for me, three years there. 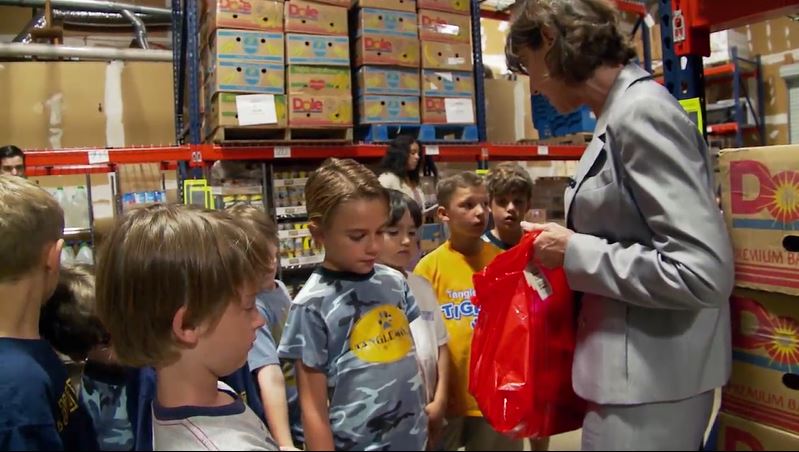 A still from “Slant 45: The Movie,” Birnbaum’s film about kid-driven service programs inspired by the Super Bowl.

How many people do you usually have working with you on a project?

I, for many years, have worked on one-man-band production technique. I taught it for a while, really developing how to do decent lighting, really good sound, good shooting, all of the things you need to bring to that game to do it by yourself, and a lot of my films have benefited from that very small footprint. The intimacy that one can obtain, the fly-on-the-wall quality of footage when you’re just by yourself.

When you take on a project, how often do you not know what will come out of it?

Well, in some ways, you never know because there are always surprises, and obviously sometimes you have a much better idea of what the real story is. I do my research; I try to pre-interview people on the phone whenever I can to get a sense of what the real questions are that need to be asked and what they have to say, and that gives me a lot of insight.”

It’s kind of an organic process. You get in there and things reveal themselves. I try to do every interview with a list of prepared questions, and then hope for serendipity, hope for something unexpected, some emotional content that I didn’t realize was there.

One of the hardest lessons to learn early on in my career doing interviews was not to turn the camera off when people start crying. It’s kind of the human thing that you want to do. You want to spare someone that discomfort, and I know I did it a few times at the beginning, but that’s why you’re there; that’s why they’ve agreed to sit with you, and so respectfully, you continue to roll. You make choices later about what’s appropriate, and sometimes it’s not, sometimes it’s just not appropriate. Often, it is.

The art of the interview is what’s been key to the kinds of films that I make, and I owe that to my mother. My mother taught me that I could talk to anyone. She certainly did, if she had a problem with something, a product or something, she’d generally want to speak to the head of the company to begin with. I got some of that from her, and it’s been one of the most amazing parts of the career is the people I got a chance to talk to, an incredible spectrum of ordinary to extraordinary people. 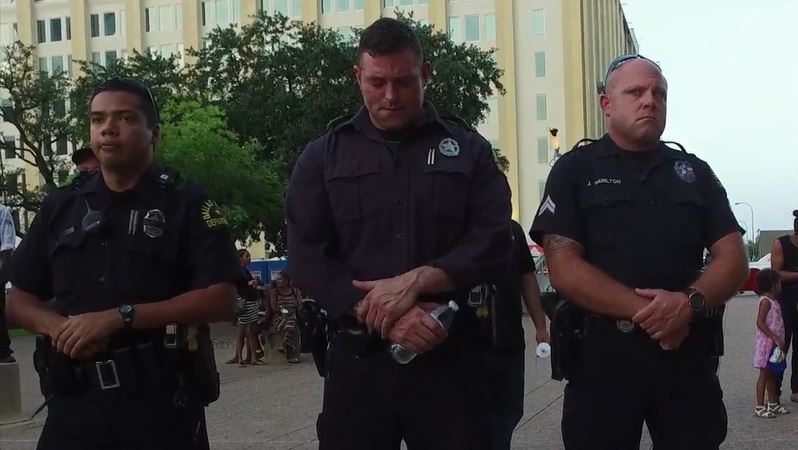 A still from the footage Birnbaum shot at the memorial for Dallas police officers who lost their lives in the July shooting.

You talked about wanting to be a fashion photographer, which doesn’t really equate to storytelling. When did you fall in love with storytelling?

Sometime in the early ’70s, here in Dallas. At that point, I was certainly a camera man. That was my job here at the station [Birnbaum  worked for KERA TV]. My title was filmmaker, and I produced, shot, directed, and edited. It was a more technical approach to it I think, to photography. I was still doing a lot of still photography, and I joined a bunch of people that started the Allen Street Gallery. They put up a show, and there was a guy who put up sequences of photographs telling a story, and this bulb just went off over my head.  I was so drawn to that, and I started doing it, mimicking it. I think that was the turning point. I think I really understood at that point that what I was doing was storytelling, so that made me a storyteller. It was just a slight shift in perspective that, you know, it changed everything. I started looking for stories that I wanted to tell.”

Tell me about “The Harp Tree.”

That’s a great example of someone who comes to me and says, ‘I have a story that I think would make a good film; I want my kids to know this story,’ and out of that came a film that has been shown at Holocaust centers around the country, my Holocaust film. I remember thinking, as I was thinking about making it, ‘do we need another Holocaust film?’ And the answer, of course is yes, yes we do.

Do you think that’s still the answer?

Yeah. You know it’s the answer about World War II or Vietnam or any story that’s been told so many times that you wonder if it can be retold in some way that hasn’t been duplicated 10 times already. And maybe it has, but if it’s important enough, then maybe there’s something you can bring to it that’s worth the time and the effort and the commitment to make that happen. 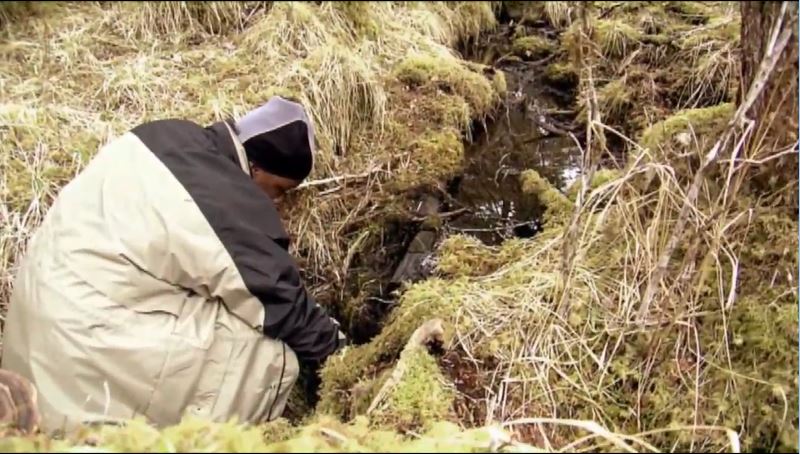 A still from Birnbaum’s film following Dallas students learning to survive in the wilderness of Alaska.

It sounds like every time you make a film that you’re learning something new about yourself or about your practice. Would you say that’s true?

Um, sure, yeah. I don’t know if it’s that deep, that there’s something uncovered every time that you didn’t realize before, sometimes I guess that’s true. That said, I’ve thought for a long time that I’ve been making the same film for 40 years. I really think I have, and I think if you look at this retrospective, I think in a way it’s kind of clear. I’ve been making the same film for 40 years about different subjects and different people. It’s about interviews; it’s about people. I don’t think I have a trademark style that I bring to films. I just sort of let them unfold.

Don Hewitt, who produced “60 Minutes,” was asked once what he thought made great television, and he said, ‘a talking head with something interesting to say,’ and I’ve got to go with that. That’s been my approach since I started – to talk to people, get them comfortable and safe in front of my camera and let them tell me their story, and if necessary, draw them out; and then find ways that are visually interesting to illustrate their story. I think it’s what I’ve been doing since that film in Vietnam.” 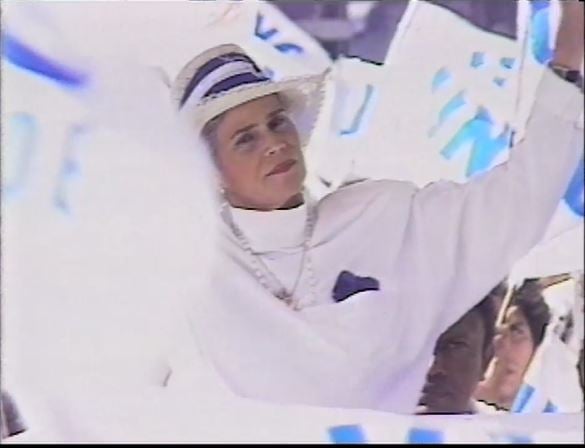 A still from “Free and Fair?” Birnbaum’s film about the 1990 Nicaraguan election.

What do you hope your legacy is?

I have been referred to now and then in situations like this as a ‘veteran filmmaker,’ and I’m thinking maybe this retrospective will push me over to legendary (laughs)…I don’t know…that I told stories well. Yeah, I guess in as few words as possible that would be it. I haven’t had a particular ax to grind or belief system to push. I just have looked for interesting stories and tried to tell them well.

Film is ensemble work. I’m deeply indebted to the many people who have collaborated with me, including Bart Weiss, Jim Schermbeck, Manny Mendoza, Jeff Whittington and Ron Siebler, and to my wife, Margarita.