The job of ‘intimacy director’ sounds like a kind of therapist. It’s actually a specialist who choreographs romantic scenes, nude scenes, even scenes of extreme emotion – on stage or screen. The outrage sparked by the #MeToo and Time’s Up movements over sexual harassment in the entertainment industry has made people start looking for intimacy directors: HBO hired one for its sexually explicit series, ‘The Deuce.’  For this week’s Art & Seek Spotlight, Jerome Weeks attends a workshop on how to kiss. 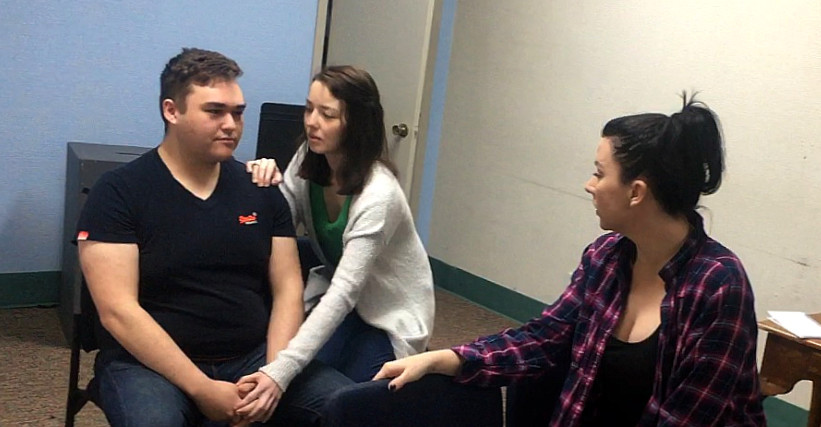 Ashley White coaches Jonathan McInnis and Courtney Mentzel on failiing at making out in a scene from ‘The Flick.’ Photo: Jerome Weeks

It’s Saturday morning at S.T.A.G.E.’s headquarters off the Trinity levee near the Design District, and the 33-year-old White is running an intimacy workshop for a half-dozen theater artists. She’s directing Mentzel and McInnis in a scene from Annie Baker’s play, ‘The Flick’: A young female movie usher is coming on to a vacant, indifferent male colleague.

“This hand is draped over his shoulder, right?” White asks. She steps back to check the audience’s view. “Her face is lost a little bit,” White tells them. “So what I would say is let’s move just about an inch lower. Let me see your hand – ” she takes Mentzel’s hand again – “and so, we’re going to go here and here,” she says, using Mentzel’s finger to touch precise places on McInnis’ neck, where Mentzel will kiss him.

“Are you good with that?” White checks in with McInnis.

“Great!” White says, steps back, and the actors start the scene again, beat by beat. Mentzel’s character starts making a move on McInnis’ character – and fails to interest him again.

When done well, a stage kiss can be a little drama all its own. It tells a story about the characters and the way they interact – or in this case utterly fail to connect. Baker’s scene lasts 45 seconds – and it’s completely silent. Zero dialogue. But the playwright has provided incredibly detailed stage directions to follow. So the awkwardness, the emptiness, the attempted eroticism – all of that must be conveyed via the actors’ bodies, their eyes, their timing.

OK. So – try to remember your first kiss. No, not that one. Your first real kiss. 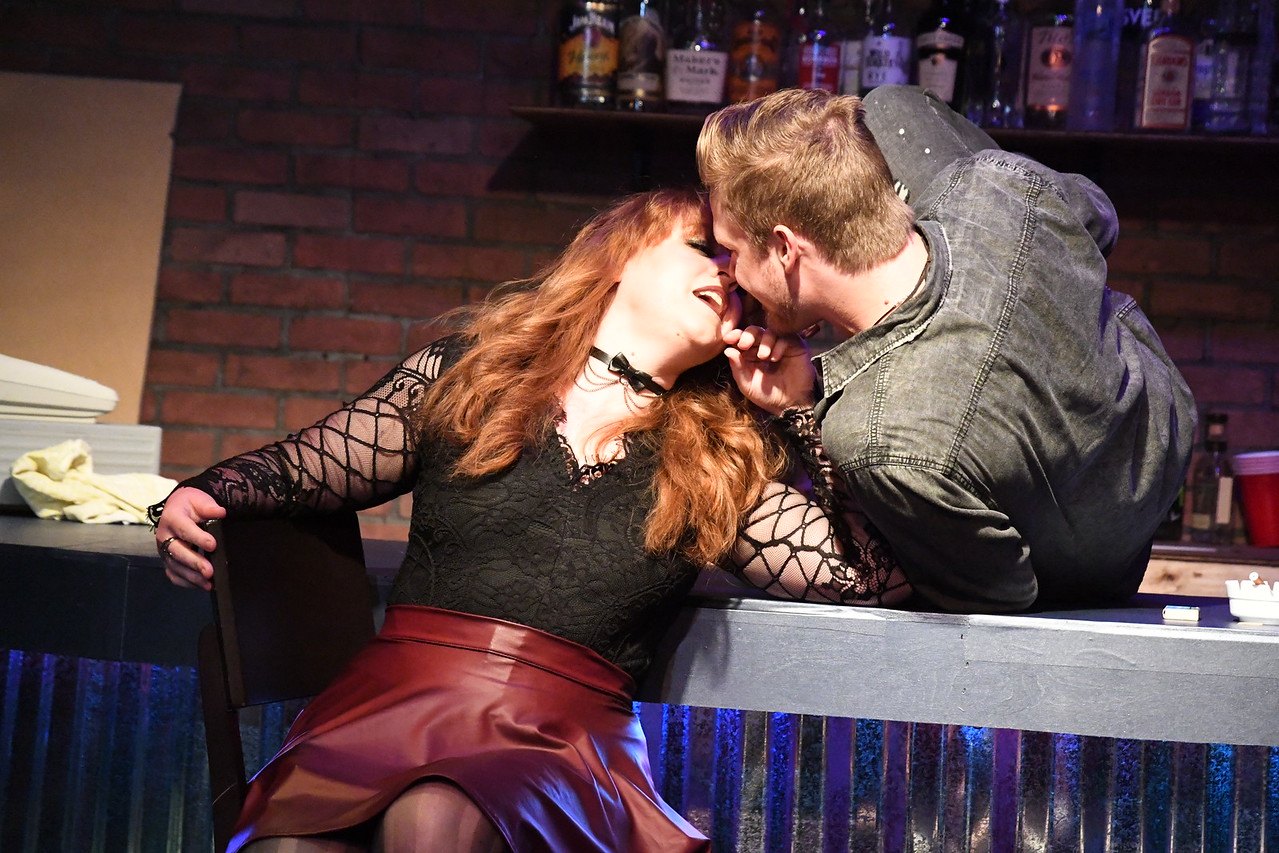 IMPRINT theatreworks’ production of ‘Murder Ballad’ with Laura Lites and Kyle Igneczi brought attention to Ashley White’s direction because all the violence and sex had to be performed within inches of the audience. Photo: Kris Ikejiri

Before you started moving in, puckering your lips, did you know which way you were going to tilt your head so you wouldn’t knock noses? Or where to put your hands? Did you stand or sit — or stand then sit?  Did you sense when the other person wanted the kiss to end? Or did you fail to pick up on that cue? Now – imagine trying to figure out all that stuff, plus issues of angles and lighting and timing, in order to make an awkward, attempted, first kiss look naturally awkward in front of an audience. And you’re doing all this while you’re pretending to be someone else and you’re kissing someone you don’t know that well.

So many calculations, and we’re not even talking about nudity or simulating intercourse here. Just a dud seduction.

But isn’t all this timing and physicality and emotion – isn’t this the kind of thing covered in acting class?

“It’s not, it’s not at all,’ says Taylor Owen. Which is why he’s taking White’s workshop. He’s 24, studied theater at Collin County College and now he’s at UNT – “and we’ve never had any kind of training like this.”

Owen says what any number of actors will tell you: With intimate scenes, directors often just tell the actors to go figure it out on their own. Settle on whatever you’re comfortable with. Owen’s high school drama teacher told him that – for Owen’s very first kiss, ever.

“It’s bonkers to me,” White tells a workshop — a different workshop this time, this one’s at the Stomping Ground Comedy Theater — “it’s bonkers to me that we choreograph literally everything about the theater experience except the actual, most intimate thing that you can do with someone else. And we just say, ‘You guys can go over there and handle it.’ “

It’s also, she says, a missed opportunity at theater – at creating a more effective scene. White graduated from the American Musical and Dramatic Academy in New York City in 2004. Got certified by the Society for American Fight Directors in 2011. The next year, she established Stage Combat Dallas (SCDallas), an organization for fight choreographers. Learning to make scenes of violent physical contact work safely on stage – that, she says, led her to working with intimate contact on stage. The procedures, she says, are similar for breaking movements down into component parts, for knowing what looks good, what can be faked. Today, White is the only North Texas member of Intimacy Directors International, a professional association.

“Through my approach to staging scenes several years ago,” White says, “actors would just be like, ‘Thank you so much. I’ve never had a make-out scene choreographed.’ Or ‘Thank you for having no one else in the room except the stage manager when we did that sex scene.’ Or just ‘Thank you for making it safe.’”

‘Safe’ is a word you hear a lot with White – along with ‘consent’ and ‘comfortable.’ She’s always asking performers ‘You OK doing this?’ You never know what might cause a person to flinch, to step back or – to find disturbingly arousing. None of that makes for a smoothly well-functioning work environment. Providing a safe space where actors feel they can do possibly uncomfortable things – disrobing, kissing strangers, being wildly emotional or physical – is step one. White does this by approaching the entire process as clinically and thought-through as possible. All the careful angling of heads, the placement of arms or legs – that’s actually the last thing she does. White reads the script, consults the actors and director. She finds what’s needed, what’s acceptable, to make this story work – before rehearsal even begins.

It’s an old paradox in acting:  To look completely convincing that you’ve lost control, you need to know what you’re doing. White takes the ‘sexiness’ out of a sex scene – the impulsiveness, the aggression, the seduction – in order to make it sexier. When actors trust their direction, know what they need to do, then they can settle into their characters and become more fully expressive. A passionate performer can catch one’s attention. A passionate performer who knows precisely where he’s headed can grab it and hold it.

Onstage or screen, we see actors weeping, looking foolish or sexy – or partly naked. As White tells her workshop, actors are in the business of being vulnerable – in public: “Vulnerability can involve touch. It can be completely emotional. It can be very, very powerful. It can also be incredibly dangerous. So I have to always make sure that everybody in the room is comfortable with the emotional and physical requirements of what’s happening.”

That’s because actors are also professionally vulnerable. They’re at the low end of the power imbalance in the industry; they’re at the mercy of stage directors, agents, producers, casting directors. Nationally, think of the Harvey Weinstein scandal. Locally, think of the uproar following the dismissal of administrator Lee Trull from the Dallas Theater Center over allegations of ‘inappropriate conduct.’

Actor Jacie Hood is in White’s workshop. “Sometimes as an actor,” she says, “you may feel pressured by directors who are not experienced to make you go outside of your comfort zone – and not in a good way. You know, if there’s a script that calls for nudity, a director might just be like, ‘Well, you need to get over it.’ “ 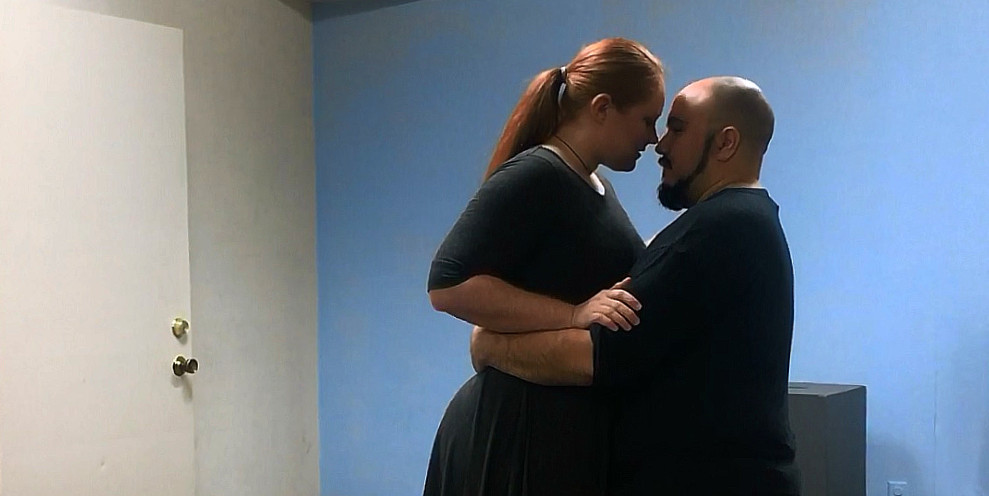 Just when she realizes this may be a mistake: Actors Jacie Hood and David Saldivar in a scene from Patrick Marber’s ‘Closer,’ coached by Ashley White. Photo: Jerome Weeks

White works as an intimacy coordinator plus a fight choreographer plus co-directing her own company, IMPRINT theatreworks. Just this month, she’s staging IMPRINT’s production of ‘In the Next Room” – Sarah Ruhl’s comedy about the unintended consequences of the Victorian invention of the vibrator (“26 orgasms,” White says, sighing with a smile, “and they all have to sound different”). She’s involved in a year-long project with Stomping Ground to see how the principles of intimacy direction can work with an improv comedy troupe. She’s in talks with two studios about film projects– all the while she’s intimacy-directing the musical ‘Spring Awakening’ for Uptown Players.

So White’s busy here in North Texas – and out of state. Shows like ‘Spring Awakening,” ” Dangerous Liaisons,” “Cabaret,” “Venus in Fur,” In the Next Room,” “Chicago – The Musical,” most anything by Neil LaBute or August Strindberg – these could provide an intimacy director a fair amount of business for life. Eroticism – as a game, as a threat, as a disguise, as an ugly weapon, as an exuberant adolescent discovery – these are those shows’ fundamental materials. But it’s also true nearly every play by William Shakespeare we’ve seen dozens of times – comedy, tragedy or history – has kisses, seductions or  sexual assaults in it. Shakespeare liked swordplay, and he liked tongue-play – they sold tickets.

Yet so far, Uptown Players is the only major, professional, Equity theater in North Texas to hire White as an intimacy choreographer. One reason given by theaters: They don’t have the money or the rehearsal time for her. That’s understandable. But she says, she has a sliding scale and she’s willing to work to accommodate schedules. She’s not there for the entire rehearsal run. She’s typically brought in for a single scene – sometimes lasting only 45 seconds.

Even so, it’s White’s work as an intimacy director that’s taken off the past year: “I get reached out to regarding intimacy direction almost 2 to 3 three times a week. It’s almost too much.”

Hence, these workshops – to get the word out, to get others interested in working as intimacy directors.

White’s not going to improve stage kisses – or actor safety – on her own.