Skip Navigation
Home > ArtandSeek.net > Goat Song Theatre Collective Puts Autism In The Spotlight At Out Of The Loop 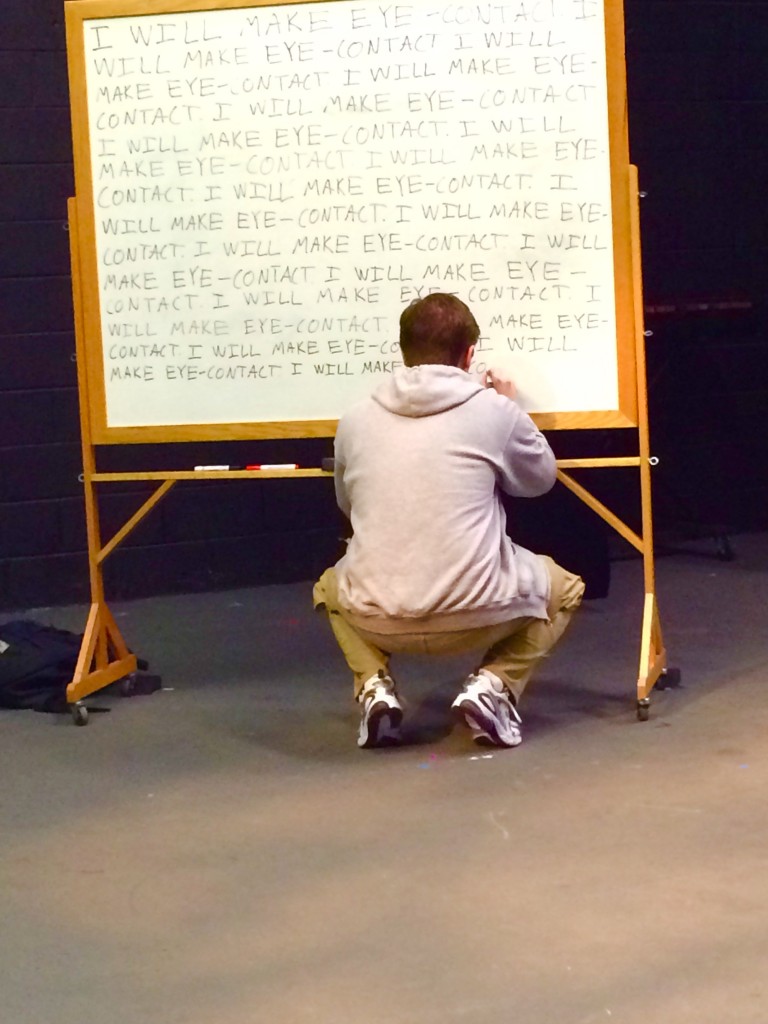 The Out of the Loop Fringe Festival is on at WaterTower Theatre. And that means dozens of experimental plays, cabaret and dance performances. One new Dallas theater company’s show takes a rare look at life with autism.

WaterTower Theatre’s Out of the Loop Fringe Festival in Addison runs through March 6th, and Goat Song Theatre Collective’s With My Eyes Shut plays Saturday night.

As you take your seat in the black box theater, an actor is already performing. He writes on a whiteboard – “I will make eye-contact” – over and over again. When the play With My Eyes Shut starts, we learn that this guy – his name is Cole – is on the autism spectrum.

Cole meets Naomi, a girl with Asperger’s, who also has trouble with eye contact. 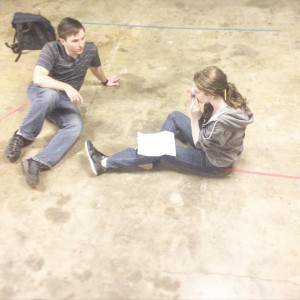 Cole: “Aren’t we all prodigies?”

Yes, Clown School. Cole and Naomi have been enrolled to help them learn social skills. The show has a loose storyline. But as the pair play games like Simon Says, talk to a stage manager, and handle props like a bowl of spinach and xylophone mallets, the audience gets uncomfortable. It all seems meant to get the audience to experience a sensory overload, something similar to what a person with autism might feel.

This is just the kind of work that this fringe festival has featured for 15 years. Kelsey Leigh Ervi co-produces the festival. She explains, “Out of the Loop – it sort of serves as a platform for artists to do something outside their comfort zone or something that they wouldn’t typically have on their normal programming. We’re always looking for new things, different things, things that are telling interesting stories. And works that aren’t usually seen around town or that we as WaterTower wouldn’t normally have on our stage.”

Out of the Loop has featured work from around the country. But this year, it’s almost all North Texas theater groups. And many of them are brand new. Like the group staging this play. They’re called Goat Song Theater Collective, and they’re from Dallas. They chose With My Eyes Shut, by Waco playwright Kira Rockwell, for their first public performance. Abigail Birkett directs the play and co-founded the group.

“Part of the reason why Goat Song Theatre Collective was so excited about this piece was that I can’t really think of another play that deals with people who are on the spectrum,” she says. “Even when plays, movies, TV shows sort of incorporate a character who is neuro-atypical or has some kind of a disability, typically they’re not really complex. We get to see Cole and Naomi as two fleshed-out, complex human beings.”

Nuance frustrates Cole. And he struggles with social cues. They would be so much easier to understand if they were written out for him – more like dynamic markings in a piece of music letting one know specifically what is expected of the performer.

“Mezzo piano, medium soft. Mezzo forte, medium loud. Crescendo, gradually louder, diminuendo, gradually softer. You give me a sign. I see it. I read it. I know what to do. I know cues. I can read cues. I’m not an idiot.”

Birkett says the group tried to cast actors who identified as being on the autism spectrum. They reached out to advocacy groups for help. And they struck out. Birkett believes that part of the problem is that there are not a lot of roles created for people with social, mental, and physical disabilities. “Something that kinda goes hand in hand with that is that people who are disabled are typically not encouraged to pursue careers in the arts.”

Plays like With My Eyes Shut may start to change that.

Birkett goes on, “One of the things that we are really hoping with this piece and with other pieces like it as this becomes more of a conversation in the theater community, is that it will open up a space for different stories to be heard and also for more diverse players and collaborators and performers to kind of tell those stories.”