Welcome to the Art&Seek Artist Spotlight. Every Thursday, here and on KERA FM, we’ll explore the personal journey of a different North Texas creative. As it grows, this site, artandseek.org/spotlight, will eventually paint a collective portrait of our artistic community. Check out the more than 50 artists we’ve profiled from music producers to painters to a food stylist. 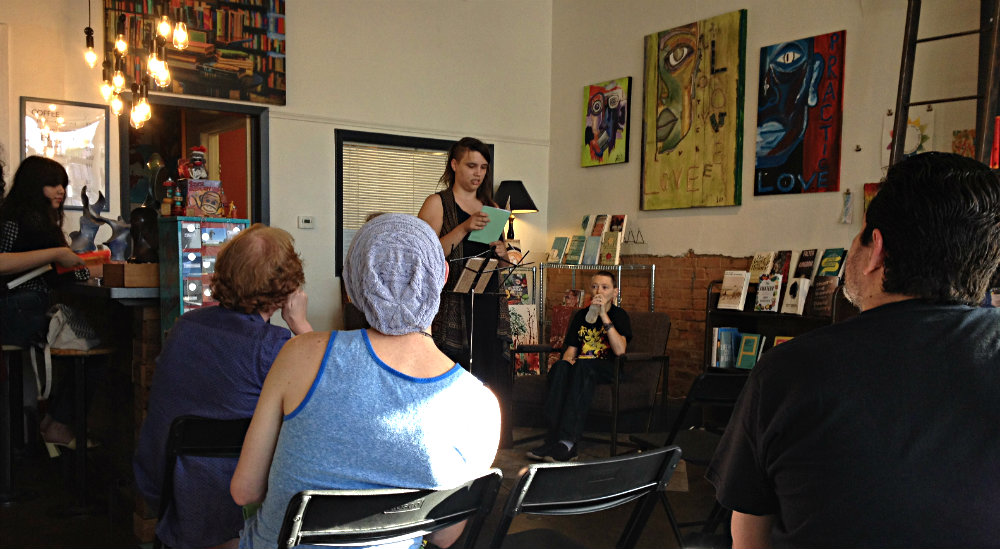 It’s the second Tuesday of the month. So that means it’s open mic poetry night at the Deep Vellum bookstore on Commerce Street. More than a dozen people are seated in the tiny shop listening to Nadia Wolnisty read her poetry – and waiting their turn to be called up in front of the group

Cristina Rodriquez admits she wasn’t really a poetry fan when she started four months ago as the store’s general manager. But, she says, “if you don’t like poetry, watching it is just a totally different experience. They’re one of my favorites now.  Any poetry event that we do in the store is typically my favorite.”

It was Will Evans who opened the shop in 2015. A year and a half earlier, he’d started Deep Vellum Publishing. He got international attention for putting out translations of high-quality foreign literature. But his ambitious plans caught up with him. Only six months after opening the shop, Evans announced he’d have to shut it down. He and his wife had a baby coming and he had a new job with a film production company. Someone else would have to mind the store.

That someone turned out to be Anne Hollander.

“When the opportunity presented itself,” Hollander says, “I mean, it was way out there in fantasyland.” 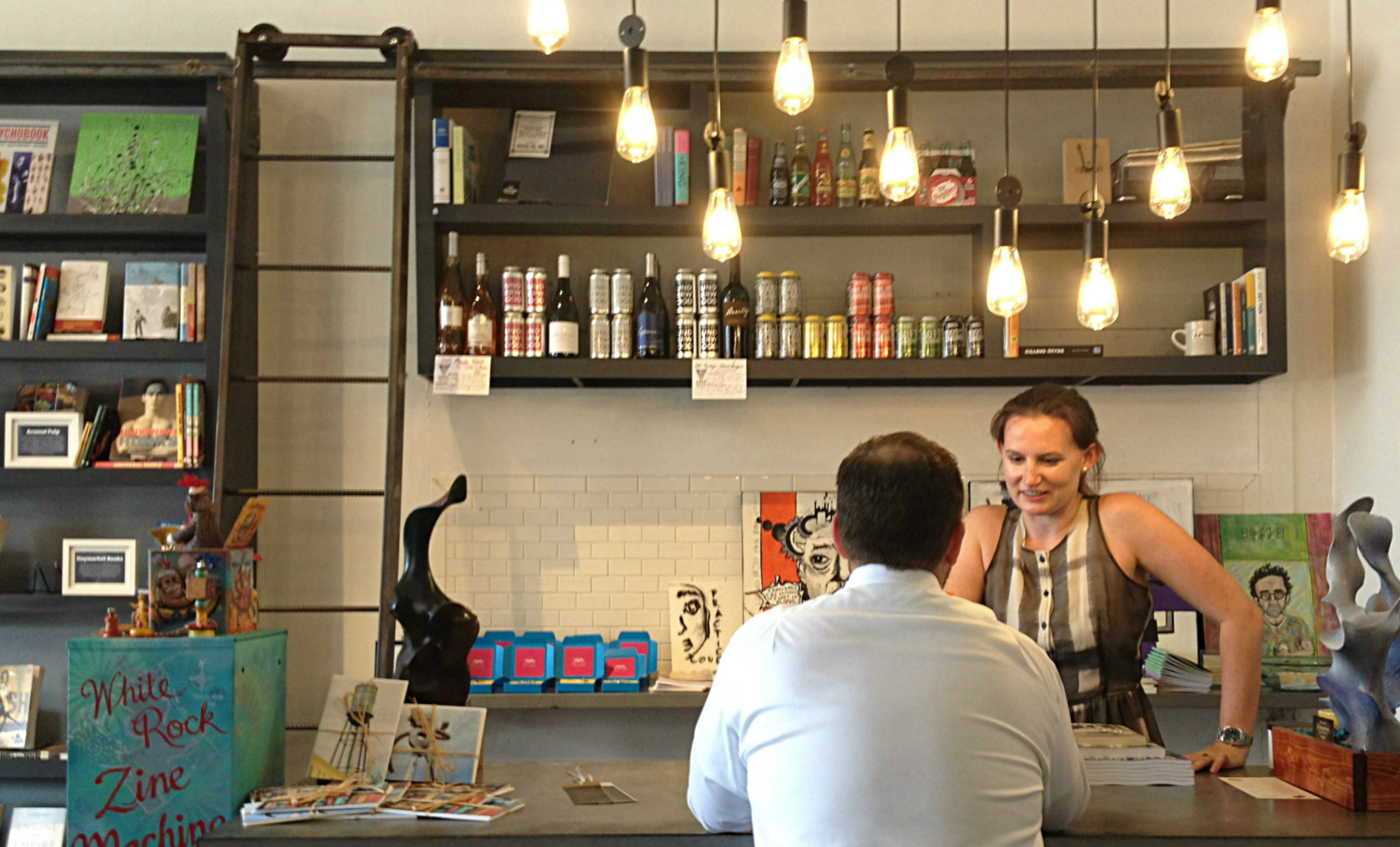 The 36-year-old doesn’t remotely have a literary background. Her degrees are in biochemistry and national security law. She was running her own consulting firm in technology and marketing.

But that fantasyland got closer when she and Evans met and found they had similar ideas for the store, ideas about selling only small and independent publishers. The book industry still has its retail traditions, its dusty old ways of doing things that Hollander knew she’d have to learn. What she didn’t know was how welcoming the North Texas literary scene would be.

“Where I had so much experience walking into boardrooms and talking to executives and getting a lot of pushback,” she says, “the literary community was such a breath of fresh air. I’m constantly amazed at how welcoming they are to new people.”

Hollander brought new ideas about serving that community and her neighborhood. She’s mentoring literary classes at Uplift Luna, a charter school in Deep Ellum. Her store is compiling data to track inventory – data not normally found in publishers’ databases, like an author’s native country or the gender they identify with. That way, Hollander is determined her shelves will offer as many female writers as male. More than 60 percent of her books already come from outside the US. And three shelves are devoted just to North Texas authors.

Independent bookstores have been enjoying a small resurgence lately, even in Dallas. Last month, Interabang Books opened at Preston Road and Royal Lane. And Deep Vellum is hardly the first bookstore to combine a targeted inventory with a calendar of public events – and beer. The Wild Detectives pioneered that approach in Oak Cliff in 2014 – along with music concerts and performances of Shakespeare in the Bar. 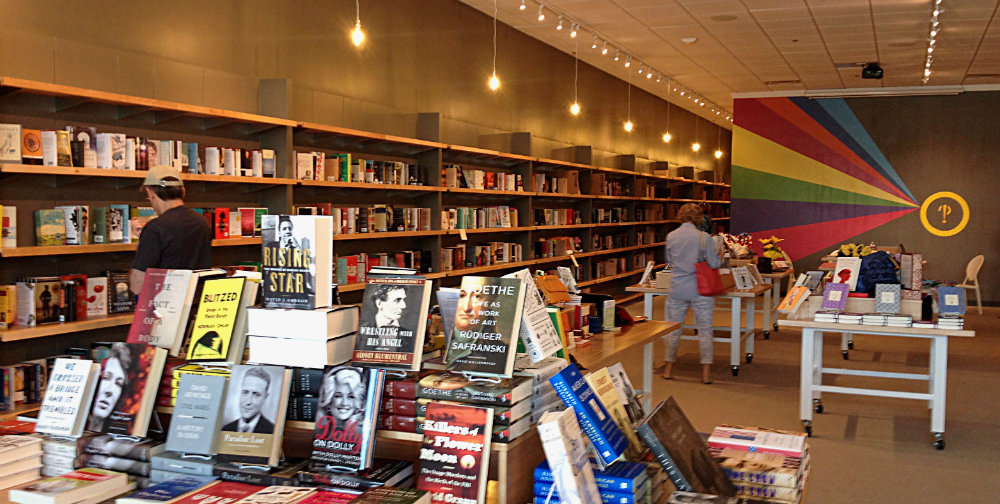 “Wild Detectives, when they opened, it changed everything here,” says Joe Milazzo. He’s a poet, editor and novelist, and he runs a poetry series at Deep Vellum called Other People’s Poetry. “Poets and writers, people who are just readers and lovers of literature, they had a place to hang out.” But, he says, since then, the local scene has expanded beyond nights at the Wild Detectives. “There is a huge community of people doing interesting things with words right now in Dallas. They’re not necessarily poets, they may be visual artists. There’s a tremendous interest in performance poetry. So this space in Deep Ellum is really important.”

In order to distinguish the Deep Vellum store from the separate Deep Vellum Publishing, Hollander says by the end of the year, the store will be re-named, ‘re-branded.’ She also has plans to launch a website called Literary Dallas. It’ll be an events calendar for just about anything book-related around town. She’s also planning another Deep Vellum bookstore, this one in Denton, plus smaller, kid-sized versions around the area.

Hollander is clearly bullish on the resurgence of interest in print literature and the future of  Deep Ellum – she took out a 15-year lease on the shop. As for possible changes coming to the neighborhood because of the glossy, Uptown-style high rises that are muscling in, disrupting the funky, red-brick, loft-apartment feel of the area, threatening its blues-and-punk-and-car-repair shop history, Hollander is sanguine. She remembers coming down here in the ’80s with a fake ID to get into clubs.

“Every generation makes its stamp on Deep Ellum,” she says, “but it’s always been a creative center. And it’ll remain one.” 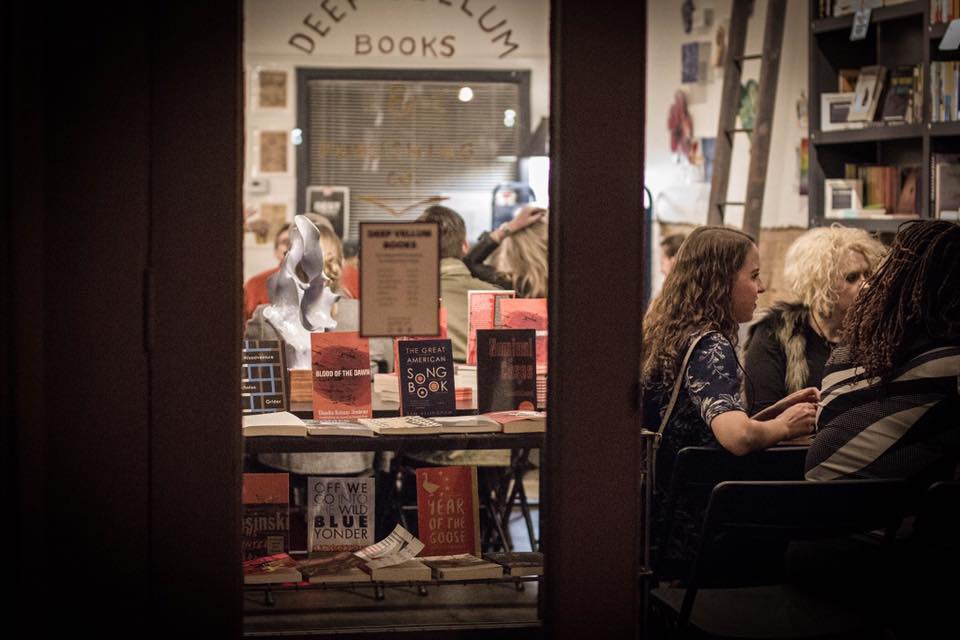 You can hear Hollander’s conviction about books and her store and what they can mean for the area. She speaks with the fervor of a convert.

When did you start considering yourself a bookstore owner? Not, ‘Gee, I like reading and collecting books,’ but ‘This is it, this is my career, I’m rolling the dice on this’?

Thanks. But at this point, it’s finally starting to stick in my brain that this is what I’m actually doing. There was probably about six months there when I would wake up in the morning – my fiancé and I live just across the street in the lofts – and I would be like, ‘I own a bookstore. This is wild! This is crazy.’

It just didn’t seem entirely real. And while I still absolutely love doing this, I’m finally a little more comfortable with it. We’re finally in a bit more of a rhythm than those first six months looked like. 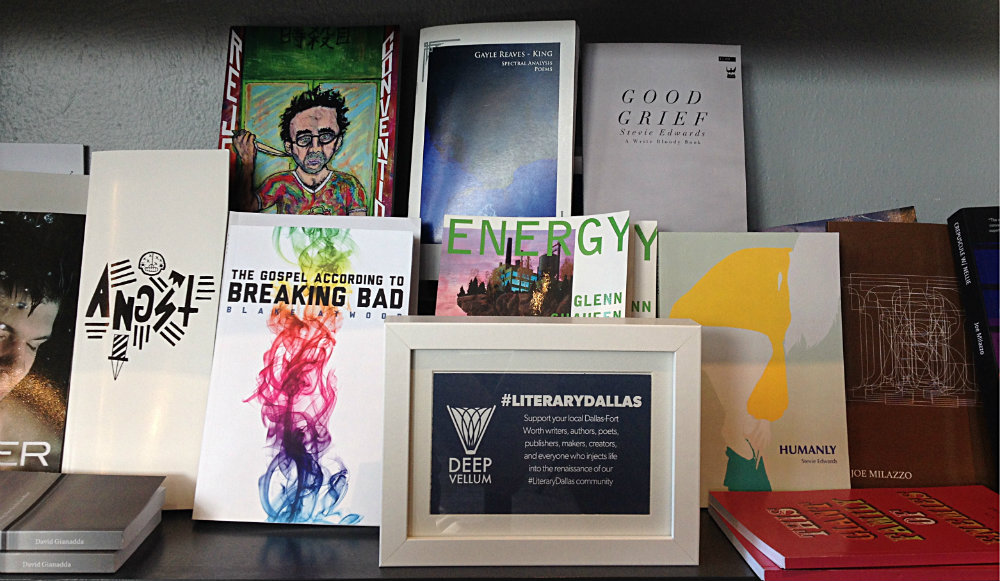 One of the shelves in Deep Vellum devoted to Dallas-area authors. Photo: Jerome Weeks

But you hadn’t pursued a literary education, certainly not in college or post-grad. Not even in history or other related areas of the humanities. So where did this desire to own and run a bookstore come from?

As a young child, I was always a voracious reader. My mother was a school teacher and we lived in a very small school district in Buda, just outside Austin. It’s not small anymore.

But I can remember reading through the school libraries, plural. It was the primary [school] library and then when I was in second grade, it was traveling up the hill to the intermediate school and getting special privileges to check out those books, and I finished all of them by the third grade. And so then my mother worked at the middle school, and I was there every afternoon reading those books.

Always reading. So somewhere along the line, yeah, there was the idea that I can own a bookstore and talk to people about books and appreciate what we’ve got.

So what are your favorite kinds of books? What are you reading now?

I despise the Victorians. [Laughs.] I’ve just turned off half your audience right there.

I’m not the biggest fan of the entire period, either, but all of them?

Just about. When you start to pay your writers by the word, that’s the language that comes out.

The Brontes? Gustav Flaubert?? They weren’t paid by the word.

Oh man. I just can’t do it. [Sighs.] So I lately, I’ve really gotten into feminist writing. 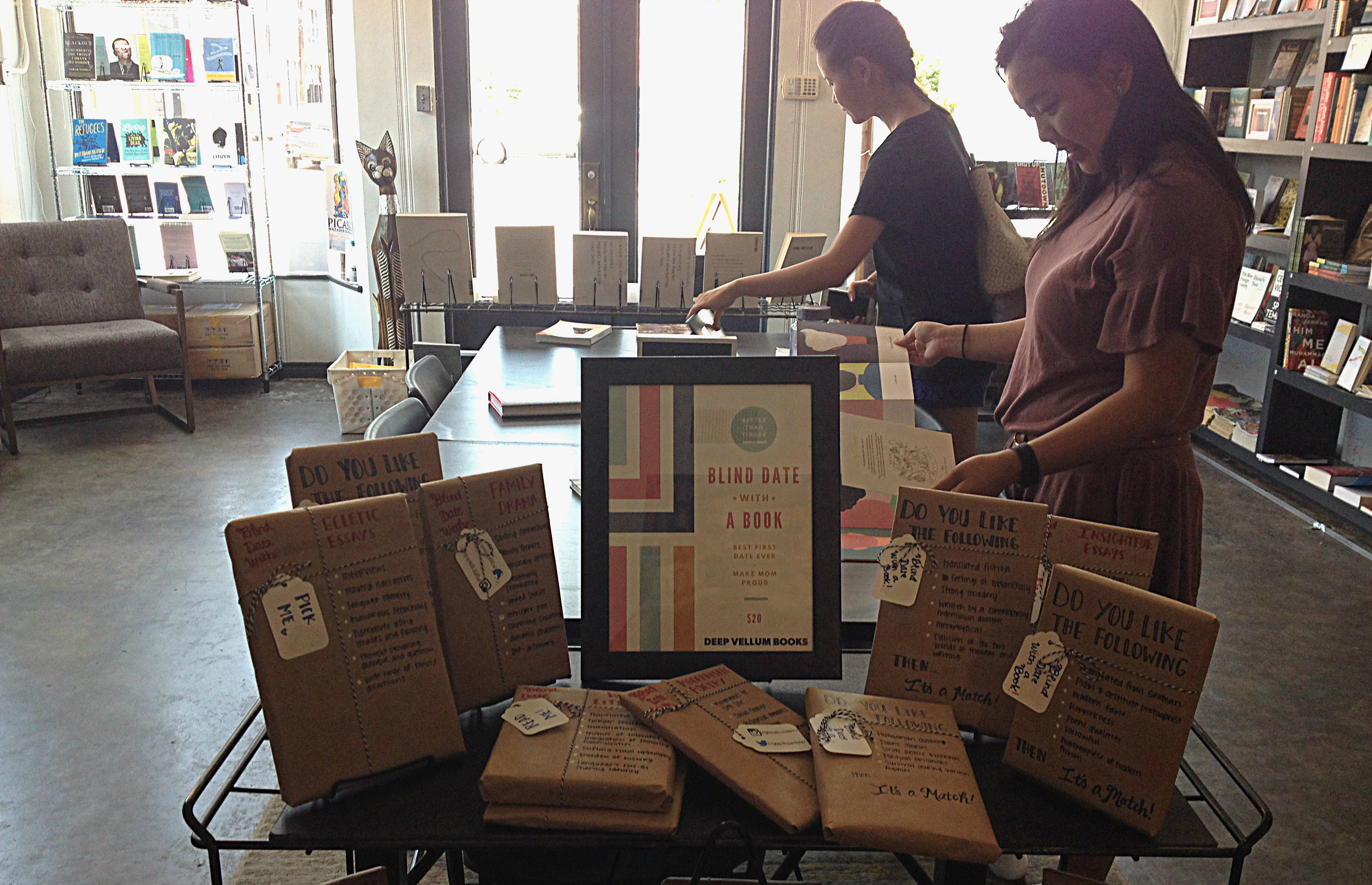 Hollander borrowed the ‘blind date with a book’ idea. You purchase an unknown book for $5 that’s described by genre and style on the wrapping. It’s one of the store’s most popular offerings, she says. Photo: Jerome Weeks

Non-fiction, primarily, but some fiction. Because I think I have a misunderstanding of what all that means. Same thing with queer literature. Forget the political side of things for a second. I want to understand that perspective, who we’re really talking about and the things they were doing. I journeyed through everything Deep Vellum [Publishing] did. I got pretty deep into French literature – and then [laughs] I had to dig myself out.

I see African literature coming up next for me. I go very deep, very fast into this style or that era or genre or topic. I did the same thing with music. I played the piano for thirty years. I’d go through phases. I’d learn a lot about what was going on. I’d find something that captivates me. So I’m in a transition into African fiction.

My specialty in law school was national security law. Back then, it was Latin dictators I was fascinated by.

Garcia Marques’ ‘Autumn of the Patriarch’?

Oh yes. Loved that. So now, with everything coming out of Syria and the Middle East, I’m very interested in the intersection between the humanities and terrorism. It provides an additional intellectual stimulus.

What have you given up to pursue this? Most artists say something along the lines of ‘money’ or ‘family life.’ Others say, ‘It’s great. I gave up the suit and tie and the 9-to-5!’ But you’re not the typical artist. You’re more a literary advocate who’s running a for-profit community hub here.

What have I given up? So yes, the money and family part of things. But my fiancé – his name is Matt Miller – he’s been absolutely instrumental in helping get this done, doing some of the handiwork around the store, from helping out with crazy events to hanging the shelves. As has the literary community in general, helping out. But I give him a ton of credit for getting us here.

So I didn’t necessarily give up the family life. But there was a little bit of strain on it. We were basically living it here.

And I’ve definitely given up the business suit. They’re all hanging in the closet and they all still have dry-cleaning bags on them.