Skip Navigation
Home > ArtandSeek.net > Have A Little Local Craft Beer With Your Bard?

For two years now, a tiny Dallas theater troupe has been performing Shakespeare’s plays in unusual outdoor locations. They do each show only twice, so the performances are popular and very hard to get into. Local All Things Considered host Justin Martin sat down with Art & Seek’s Jerome Weeks to talk about what it’s like downing some draft beer while the Bard gets performed all around you.

JWJustin, I’m going to play a bit of outdoor Shakespeare recorded a few months ago. It’s from a speech that normally doesn’t get anything like the response it gets here:  “All the world’s a stage [audience cheers and applauds]. And all the men and women are merely players, They have their entrances and their exits, and one man in his time plays many parts.  [More cheers and applause]”

Justin: That’s from the comedy ‘As You Like It,’ right?

JWRight. That’s the character, Jacques. It’s his famous setpiece, The Seven Ages of Man, when he muses on how we all grow up, grow old, grow feeble and die.

Yeah. Not exactly the stuff I’d be greeting with cheers.

JWIt’s a performance by the group Shakespeare in the Bar.

How much alcohol was involved with this production?

JWThis is Shakespeare. Performed. In a bar.

The basic idea may sound like an easy bit of populist pandering: “We’re not snobby high art, we’re in a bar.” But for all the prestige we’ve granted Shakespeare over the centures, that’s basically where he did his plays. The Globe Theater was built in the midst of whorehouses, pubs and prisons. It was outside London’s normal legal jurisdiction — that’s a major reason they built it there; they weren’t likely to get busted.

True, the nobility did come by – on boats from across the river – and they could pay more to sit in the comfy seats in the balconies above. But much of Shakespeare’s crowd  — the groundlings or “penny stinkards,” as they were called, the people who paid a penny to stand in the yard right up against the stage – they had taken the afternoon off and were in the process of getting stinking drunk – before hitting the brothels.

And Shakespeare in a Bar certainly plays up that whole carnival mood as well. They have a local brass band perform beforehand – and even during, often punctuating scenes (or vamping while a late-arriving actor finally makes his entrance). They’re the 8th Street Orkestar – a regular Balkan brass band. And it’s amazing how much a live band oompah-ing away like that just signals to you, “This is going to be silly fun.”

JWGood question. When Shakespeare in the Bar started two years ago, I frankly was wary of it as a kind of novelty. I mean, outdoor Shakespeare in general tends to be broad and simple. Or it tends to lean on the relaxing pleasures of just being outside on a summer night.

JWExactly. And there is definitely some pandering to the audience with Shakespeare in the Bar, some hammy playing to the groundlings. I mean, with ‘As You Like It, for example, Jacques is a melancholy-bordering-on-cynical nobleman who makes snarky or bummer comments about all the crazy lovers and country folk around him – as with that ‘Seven Ages of Man’ speech. But actor Marcus Stimac, whom I’ve enjoyed before, delivered the lines like each one was a bravura knockout punch. He played them like audience favorites because they’re some of the few lines most of the theatergoers ever knew. He didn’t sound world-weary; he was having a ball.

Even so, I hadn’t counted on the real affection you feel watching actors having the time of their lives a few feet away from you. It’s a re-confirmation of Margo Jones’ idea – she’s the Dallas pioneer who promoted in-the-round stagings. What you lose in scenery, she argued, you can gain in intimacy and audience interaction. By the end of the evening, you’re, like, friends with everyone in the place. Beer helps.

What’s more, Shakespeare in the Bar is only done on Mondays – because some of the actors are in regular shows the rest of the week. So these are young performers doing roles they might not get a chance at otherwise and they’re doing them only once or twice. And they have deliberately rehearsed the show maybe twice. 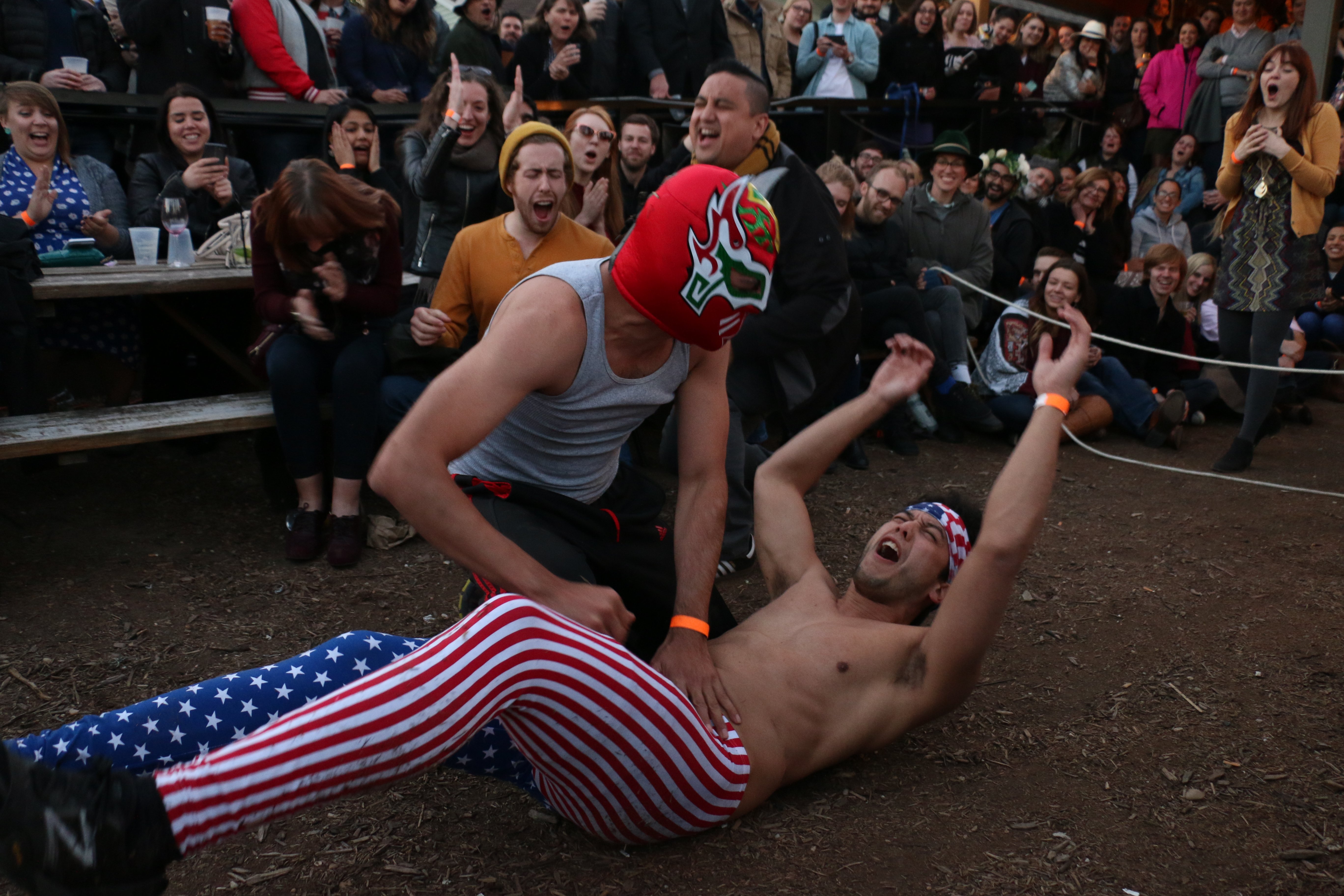 JWThere certainly are stumbles, I admit – or the occasional pause when you realize someone’s forgotten something.

But amid the dropped lines and some of the rather obvious character choices, what you also get is that electric feeling of actors doing this for the love of it, actors knowing they have this one chance to go for broke, so let’s take it. All that lends a real freshness here, a frisky riskiness, to coin a phrase. You want to see them succeed, but frankly, you also wouldn’t mind it if they blew it completely. Because, frankly, it’s fun, either way.

I asked Katherine Bourne, one of the group’s founders — along with Alia Tavakolian and Dylan Key —  about this. In Chicago, she saw Backroom Shakespeare, one of the early promoters of this whole approach, and she herself was trained in an acting technique that stresses knowing your lines, knowing your character – and then kinda winging it.

“And I found that really freeing,” she said, “a freedom from what I’d done before that was very, very planned, right down to the second.”

JWActually, almost. It has that ‘anything can happen’ feel. I mean, they’ve memorized their lines and director Dylan Key has established, ‘This is where you come in and that’s where you need to end up.’ But little else in the scene has been mapped out – in fact, they don’t even call Key a ‘director’; he’s the ‘navigator.’

Now, it’s easy to overstate the significance or success of Shakespeare in the Bar. They’ve certainly become critics’ darlings, and their shows are definitely packed. But the group has done mostly popular comedies; even when they’ve done a tragedy, it’s a real crowd-wowser like ‘Richard III.’ I wonder how well they’d do with more mixed-emotion or straight-out downer plays, ‘problem’ plays like ‘Measure for Measure’ or ‘Troilus and Cressida.’

But then, not even the Dallas Theater Center or Shakespeare Dallas has the minor bravery to risk any of those, so it’d be unfair to hold that against the Bard in the Bar folks.

In any event, these shows are also staged in the courtyards behind the Wild Detectives or 8 Bells Alehouse. And those hold 350 people tops. This is not like a typical theater company that might have to fill that many seats for three weeks in a row, five shows a week – and then do it all over again two months later. Shakespeare in the Bar does two, three shows a year – for a total of six performances. So this isn’t a huge audience we’re talking about.

But here’s the other side of that perspective: Bourne and her friends have done all this with a spirited style, some acting chops and very little else, just a fair amount of social media smarts. They have no home office or theater, no sets, no costume storage. Interactions with the public is done pretty much through Facebook and Twitter. There’s no phone number you can call. This is no-frills theater – but with beer.

And so they attract a young millennial crowd that many arts groups would outright sell their marketing departments for.  It is true that if you see a Shakespeare Dallas production or one of the DTC’s efforts with the Bard, you’ll see a fair number of twenty-somethings and thirty-somethings. There’s that whole date-night, picnic-under-the-stars quality that Shakespeare Dallas offers, for instance. But what you’ll also see in those two theaters are families – older folks and kids.

And no one’s taking their 10-year-old to Shakespeare in the Bar. And as for 80-year-olds in a bar, well, they’re generally there for other reasons than theater appreciation.

JWExactly. So on average, here, you get a much more concentrated twenty-to-thirty-something crowd out for drinks and fun, the kind of club-hopping troupe you almost never see en masse inside traditional theaters. And this crowd is piped into these shows almost entirely through Shakespeare in the Bar’s Facebook page or word of mouth. It may not be a huge audience but it’s a devoted one. So those 350 seats often have a couple thousand people vying for them online the day they become available.

You can see why bars are happy to have Shakespeare in the Bar perform in their courtyards – and on Monday nights, too, a bar’s deadliest revenue night. It must be said, however, the brave staff of these establishments can quickly be overrun, as can their supplies. My wife and I arrived 30 minutes early for ‘As You Like It,’ figuring, yes, it’d be crowded but we could still get a beer and a bite to eat while watching the show. We quickly discovered the place had already run out of food – utterly. And our poor, harried waitress couldn’t get a beer to us until 40 minutes into the show. Our sightlines weren’t great — you need to arrive hours early to get those — and I’m a crotchety enough old soul to wonder how many nights I’d be willing to sit, crowded and hungry, on a hard wooden bench for two-and-a-half hours, even for high-energy Shakespeare.

So let’s face it: There is something to be said for, you know, professional operations at regular establishments with padded seats.

Nonetheless, Shakespeare in the Bar is precisely the kind of homegrown, web-smart, young-built and young-targeted arts effort North Texas needs more of. Shakespeare in the Bar even gives most of its revenue to a charity of the actors’ choice – while the company also deliberately keeps the ticket price very affordable. I just about fell out of my chair when Bourne said, ‘It’s not a revolution if the poor can’t afford it.’

All of this sounds so un-Dallas, you wonder if somebody is already figuring a way to run them all out of town.

In the long view, though, Shakespeare in the Bar – even in most other cities — is a young person’s effort. It’s the kind of thing people generally can do when they don’t have a burdensome financial overhead or a heavy schedule of responsibilities. The fact is it’s unlikely it’ll ever become much bigger and more established – not if it’s going to retain its freewheeling spark and spirit. You start having longer runs, more performances, and you’re talking about having to pay your actors, lease costumes, set up a more regularized, reliable ticketing system, maybe firm up a season schedule and, God forbid, sell subscriptions.

So, as much as this Bard in the Bar project is erratic, high-wire, communal fun when it comes to Shakespearean performances and as much as it offers the kind of full-tilt introduction to the plays that young people often sorely need (instead of your standard high school English class Death Grip), it may be best if it retains its brief, freewheeling, pop-up nature. It reminds us, once again, yes, in the hands of the right, motivated, talented actors, this moldy old Elizabethan stuff really is still alive – and then the next decade, the next generation, will have to learn that all over again for themselves.

So enjoy it while you can.

Monday night’s show is ‘Romeo & Juliet,’ and it’s already sold out, but typical of the smarts of these folks, they keep 50 tickets ready for walk-ups starting at 5 pm.

So there’s still a chance.

JWYep. That’s because Bourne has also figured out how this city really works.

“Dallas loves a party,” she said, “and they love to be able to say, ‘Oh yeah, I was there on that night. It was really hard to get in.’”