Museums are realizing that audiences  with short attention spans  gravitate to “here today and gone tomorrow” temporary exhibits. It is our good fortune that the Dallas Museum of Art and the Amon Carter Museum of American Art,

Nicolas Party at the DMA through February 5, 2017.

both offering free admission,  have commissioned and installed exciting temporary exhibits in their public spaces. Both took two weeks to produce , and both museums commissioned artists whose work would enliven and transform underused and unrealized  spaces. 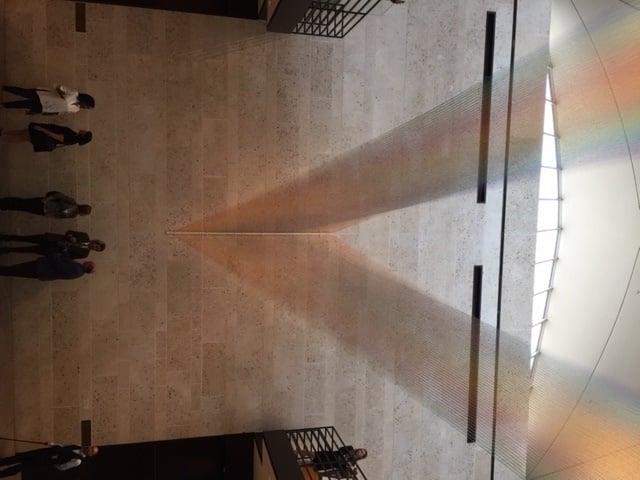 At the Amon Carter

Mexican-born 43-year-old  Dallas artist Gabriel Dawe is known as a “textile artist who materializes light”. He arrived in Dallas eight years ago as a burned-out graphic designer, eager to begin a career in the fine arts, with embroidery and thread as his medium.  Since then, Dawe has endeared himself to the  local  arts community and arrived  in the larger art world by creating awe-inspiring colorful canopies  of light with ordinary industrial sewing thread. He’s had a recent show at the Smithsonian’s Renwick Gallery, a work on view at the Crystal Bridges Museum of American Art and installations world wide; it appears his career is sewn up!

Maggie Adler, Assistant Curator at the Amon Carter, thought Dawe the perfect artist to encourage visitors to look up, down and all around the 35-foot high Philip Johnson-designed atrium, rather than using the double staircase as a route to the bookstore and bathrooms.   “Plexis no. 34”, Dawe’s colorful canopy of  layers of simple sewing  thread stretched from hooks  criss-crossing  the ceiling, now envelops the visitor in a double , if not triple, rainbow. Dawe prefers we speak of his Plexis series as “experiments in the full spectrum of natural light”.

“Plexis no. 34 ” is one of Dawe’s most ambitious projects. Using 80 miles of thread in 18 colors and guided by precise mathematical calculations, Dawe has created a spiritual environment in which to linger. The windows now play an important part in activating the space and the installation, changing the mood as daylight shifts to moonlight. Dawe’s colorful embrace will be up for two years, when another talented Texas artist will take on the challenge of creating a private experience in a public space. The 80 miles of thread will be let loose to slump into a pile. “It becomes a relic,” says Dawe, of the aftermath of his creations. The rainbow of thread will be gently massaged into a plexi box for a second life, small and dense, the complete opposite of the installation. 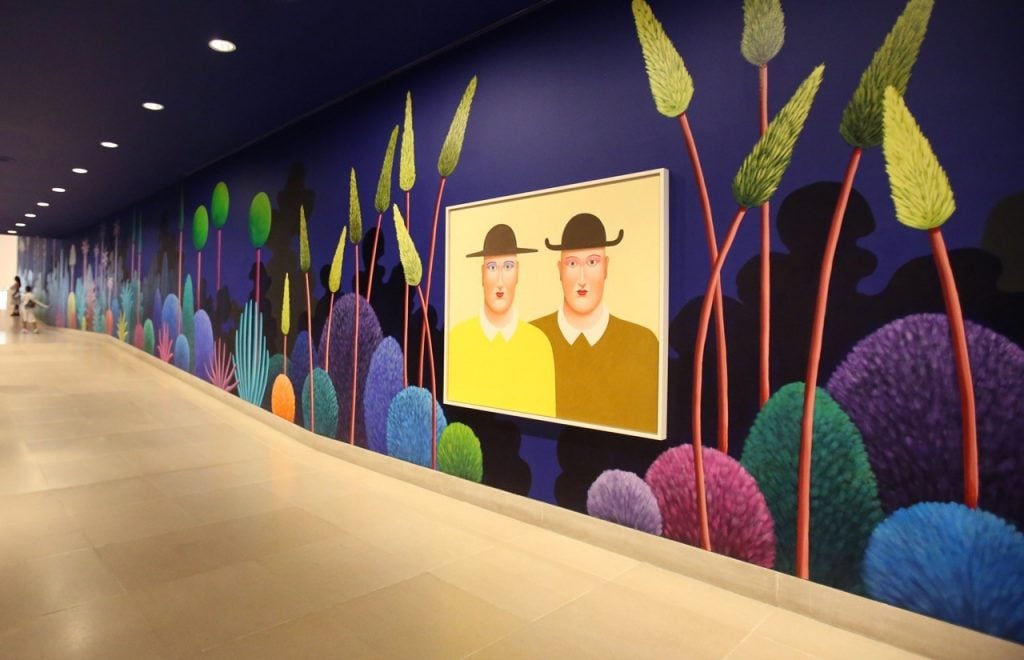 “Two Men in Hats” installed in “Pathway” by Nicholas Party, at Dallas Museum of Art.

Meanwhile,  the Dallas Museum of Art commissioned 36-year-old Swiss-born, Begium-based artist Nicolas Party, whose roots are in graffiti art,  to create a site-specific temporary mural on the walls of its often barren white concourse, the spine of the museum. Party’s work, “Pathway,” makes us feel as if we were swimming in an underwater tunnel. The walls and ceiling, painted deep acrylic blue, sprout surrealistic and fantastical plants, shrubs and trees. Party’s bold  and whimsical  graphic style makes us smile.  “Pathway” is Party’s first U.S. solo show and it demands our attention as it envelops us. Like Dawe, Party enlivens the space, lures us to linger and fills us with awe. Both installations are daunting in their vision and awe-inspiring in their execution.

The carefree mood  of “Pathway” is only slightly altered by “Two Men in Hats,” an enigmatic pastel on canvas by Party.  Hung amid the landscape of trees and shrubs, the pastel seems meant to intrude and confuse us.  Including a framed pastel is typical of Party’s mural installations. Docents will surely ask youngsters to play detective and “look again”. What differences can you spot in the depiction of the two men? The game may have deeper significance for adults, who will linger over the men’s relationship , the  message  and the significance , if any, of the inclusion of the work.

You can see work by Dawe at Conduit Gallery , UTD, the 2100 Ross Art Collection and the Resource Center of Dallas. Watch Art&Seek’s 2014 interview with Dawe.