As a historical drama, ‘Day Light’ is two or three dramas too many. Maybe four if we count the ice skates.

Written by Theatre Three’s acting artistic director Bruce Coleman (also a veteran costume designer, set designer and stage director), ‘Day Light’ won the grand prize at the annual Southwest Playwriting Competition at Stage West and is now receiving its world premiere at Theatre Three. But while the lead actors are strong and designer Rodney Dobbs’ stage is handsome and spare — befitting a Texas Panhandle ranch in the ruinous wake of the Civil War — the play’s dialogue is mighty long at first. That’s because there’s a lot of backstory to fill.

This is what we learn in the first act (code yellow spoiler alert: What follows actually doesn’t spill many beans, this is basically just the set-up). The family has struggled to keep the ranch going — after the father died and the eldest brother went off to fight in the war and never came back, leaving the matriarch Ada (Cindee Mayfield) dependent on her three remaining sons.

Two of those brothers have longstanding resentments. Younger brother Micah (Max Swarner) — more literary and married, longing to escape the stifling Texas emptiness — resents being bossed and unappreciated by Caleb (Blake Blair), his older, more commanding brother. Caleb, meanwhile, feels the burden of responsibility, struggling to keep food on the table, and he resents the lost eldest brother who left them all in a lurch. The third brother — the irresponsible runt Nattie (Matthew Holmes) — tears off in the middle of a blinding snowstorm to try out his new ice skates. And promptly disappears, causing grief for everyone.

Blake Blair as Caleb an Cindee Mayfield as Ada in ‘Day Light’ at Theatre Three. All photos: Linda Harrison

Micah’s wife Kate (Abigail Palmgren) is unhappy living with Micah’s family and has scary premonitions about her pregnancy. His attempts to soothe her only increase their tensions. Caleb’s best friend Harris (Sterling Gafford) shows up — a high-living bachelor, he owns the adjoining big spread. Harris reveals both the strong affection between him and Caleb plus the fact he’s learned a new train line may be coming through (the town’s not called ‘Junction Pass’ for nothing). Why don’t the two families join forces and get a really good price from the railroad company?

Suddenly, the panicked and half-frozen Nattie returns — immediately followed by the two shadowy, terrifying strangers who’ve been tracking him through the storm. End of Act One.

What we have, so far, is Jacob-Bickering-with-Esau-and-the-Prodigal-Son-Over-Family-Control-While-The-Railroad-Is-Coming-And-So’s-My-Baby-But-We’re-Trapped-in-a-Blizzard-and-There-May-Be-Someone-Out-There-In-the-Snow-Coming-For-Us-And-Something-Gay’s-Going-On-With-Caleb-and-Harrris. Oh, and Aunt Minnie (Connie Coit) is eager to get outta here and get back to Baltimore.

I don’t mean to make light of all these troubles. In fact, Coleman subtly and movingly handles the yearning, unspoken relationship between Caleb and Harris. While the term ‘sodomy’ certainly was known, there’s no sense the two men have ever consummated anything. Michel Foucault has argued that even the entire idea of a ‘homosexual’ person didn’t exist until the 1870s (the term didn’t appear in English Bibles as late as 1946).

So ‘Brokeback Mountain’-like, Caleb and Harris can’t articulate what they’re feeling (ironic, considering how much else they have to explain). They don’t even have a word for it, for what might give their lives meaning. And their attraction is complicated by Caleb’s wariness over Harris’ money-making scheme: It means handing over the one thing — the family estate — he’s worked to preserve. Surrendering to his feelings could mean surrendering everything. As Caleb, Blake Blair does a fine job portraying a stolid, honorable man who doesn’t fully understand the forces pounding at him, while Sterling Gafford makes Harris a dashing but insecure figure, a womanizer who’s seemingly at loose ends in his life, who knows he’s something of a fraud. 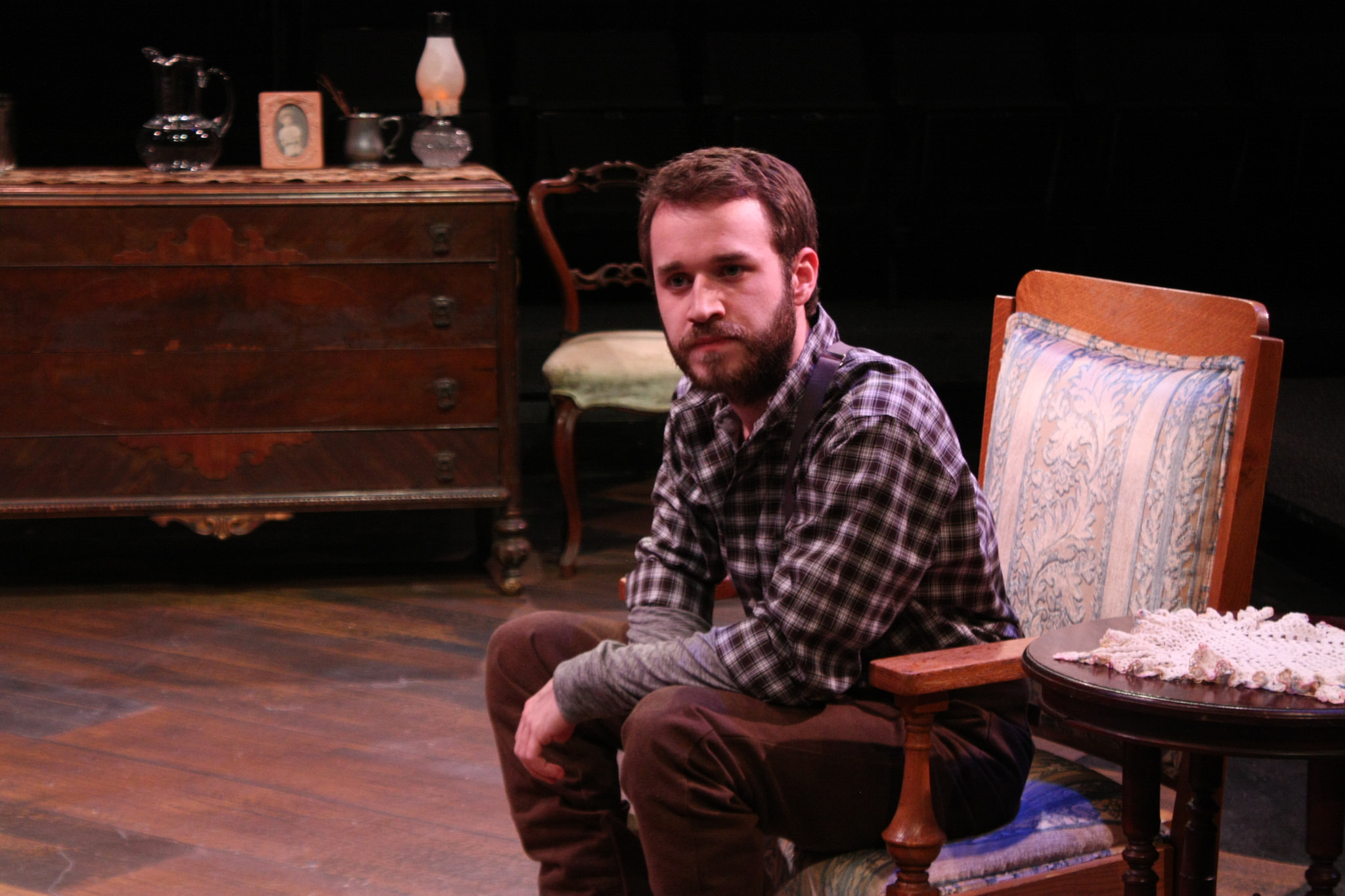 Perhaps Coleman envisioned ‘Day Light’ as akin to ‘Chekhov Out West’ (family trapped on an estate, characters wishing to flee to the Big City, etc.) But Caleb’s and Harris’ essential conflicts are the only ones that are primarily internal. Otherwise, Coleman seems to use characters to bring in plot crises and amp up tensions. Everyone Has A Problem — either with someone or with everyone — and here comes another one through the door. Which is why there’s a lot of exposition. And it’s the kind of exposition about things other characters probably already know, but we, the slow wits in the audience, need to have explained to us.

The low point in characterization in ‘Day Light’ is the Saintly Black Woman — who saves a white character’s life, consoles and connects with the worried Kate and never really complains about having to ‘solve all these white people’s problems’ even as the entire Civil War hasn’t exactly been a great boost forward for her, personally, thank you very much. Sky Williams is welcome, warm and appealing in the role, but that doesn’t make the role that much more credible.

‘Day Light’ aims to locate issues of race and sexuality in the Old West and — no surprise, really — many of the responses (both open-minded and closed-minded) would not be far out of place in the New West. But that aim is actually what’s potentially intriguing and refreshing about the play (setting aside the cliche of the Saintly Black Woman). These people are having to face the modern world chugging toward them, like that rather metaphoric new railroad line.

What’s not intriguing is the ratcheting up of a lot of the surrounding melodrama that clutters things up (in the hope, apparently, of keeping us interested). ‘Day Light’ needs to shed more daylight on the individual characters and their personal torments over these issues and not whether Kate’s fears for her baby have any basis in fact or is there enough time left for Aunt Minnie to make the stage coach.

I suspect, for instance, that many theatergoers may find the drama’s ending a little disappointing, a little puzzling. It’s open-ended, more melancholy and lingering than truly sad or tragic. But I find the hints and questions in that ending more in keeping with the play’s central struggles than what happens just prior to it: All of these problems about who’s leaving, what about the railroad, what’s this new person going to do, what’ll happen to the family now — all of them more or less vanish out the door, barely leaving a trace. This suggests how immaterial they were all along.

It’s only Caleb’s deep puzzlement over himself and what he truly wants that abides. We don’t know if he’s at the end of the line or if he represents something of the future. It’s one moment when Coleman truly approaches the Chekhovian.