We’re hosting this year’s TACA Perforum panelists on Art&Seek this week. They’ll all be in town Monday for the Perforum’s conversation about how arts organizations can meet community needs. Today, we hear from Carlos Contreras, poet and Director of Marketing and Innovation for the City of Albuquerque. Contreras is a published author, and National Champion performance poet, working to create space for artists in Albuquerque, in ways that don’t exist.

When I was 17 years old, a mentor suggest I be included in facilitation of some writing and performance workshops for a local organization. The response by the gentleman who was running the organization was something to the effect of “sure, he can come and hang out, but I can’t pay him.”

Art&Seek is livestreaming the TACA Perforum on Monday, starting at 9:30 a.m. Other posts in this series:

That mentor took it upon his respectable and so appreciated self to let the organization’s Director know that unless I was going to be paid as an equal and skilled professional, for my time in a space that I definitely deserved to be in, regardless of my age, then he wasn’t going to extend an invitation for me to “be involved.”

I think about this instance all the time. It is analogous to the place I sit now some seventeen years later, as the Director of Marketing and Innovation, in the Mayor’s Office, for the City of Albuquerque in New Mexico. Actually maybe not analogous, so much as the opposite. I wasn’t assumed to be incapable, this time. 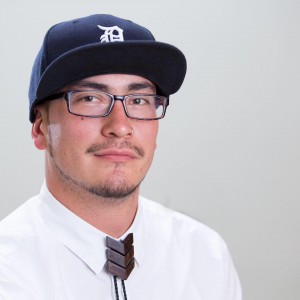 Now in my newly appointed role, history has seemingly repeated itself, but this time I can point to the city I was born and raised in and that I love so much, as being able to recognize the promise and talent I possess and allowing for my worthiness and skill set far outweigh, all “other things.”

What “things,” one might ask – Well let’s make a list: my appearance (I am tattooed head to toe, literally), my age (34 and directing a City department that never existed before, could be seen as a risk taken by our Mayor), my dress (there’s not a day I don’t walk in an albeit clean, fitted cap to match my collared shirt), and my background – I am a performance poet, visual artist, and author who holds the title of Director of Marketing and Innovation; I have a Bachelor’s in English, a minor in Sociology, and am currently an American Studies Graduate student.

Why does this all matter when asked the question of how art can better serve community? Because, I am an artist – artists serve community inherently in their work. A days spent with beautiful imagery is a better day being alive. Music is a universal language. Dance frees the soul. The more we engage art and artists in our everyday lives as human beings aiming to better more than just ourselves, but our communities, the quicker we see those changes reflected in that day to day in the world around us.

In my life to date, from the days of 17 when I realized I would be an artist for the rest of my life, no matter what else I ended up calling myself professionally, there hasn’t been a day I haven’t looked to expand my work’s reach, the profitability of my efforts, and the expansion of my professional and artistic network. For me it’s been second nature – and now, at 34, in the city I was born and raised in, I am absolutely ecstatic and honored by the thought and reality that our city’s leadership recognizes the value of individuals like myself, who wake up in that space every day making those efforts.

We are men and women who somewhere along the way were “taught to fish,” and now – the City of Albuquerque is saying “go fish, and you might catch something different than we are used to, but we will evaluate that difference, as something of value.” Everything has to change – and art does that – it changes based on the individual experience and perspective. The more we create service as an art – the more we push decision making in our cities through the avenues of creative expression and strategic activity that involves artistic and creative thinkers and doers. Inherently then, our environment improves.

If you’ve never heard of or been to Albuquerque, I invite you to discover it sooner as opposed to later, as we are on the edge of transformation; the Albuquerque I was born and raised in, the one I’ve come to know, is improving, changing and transforming. I am honored as an artist, from an official appointed capacity to be able to have a say and opinion, an influence and impact on those transformations, because I imagine it like a day spent painting, or dancing, or singing. Art is life – and makes life better, and when governance can be mixed into the palette and no longer allowed to separate from that process, then we are creating a more accessible, authentic, and real environment for everyone. Take a look at Albuquerque, now, and four years from now – it will be like two amazingly beautiful art openings – by the people, for the people. Enjoy.