Skip Navigation
Home > ArtandSeek.net > How Do These Fort Worth Billboards Connect To The Modern’s Latest Show?

Mark Bradford made his early works out of the strips of paper he’d collect from the floor of his mother’s hair salon in Los Angeles.

Those “End Papers” launched his career, and he’s since mounted shows from New York to Shanghai and currently, Fort Worth.

Bradford’s exhibition at the Modern Art Museum was interrupted by the pandemic, but the Modern has found a way to take the conversation to the streets.

If you’ve driven down Jacksboro Highway or the Lancaster corridor in Fort Worth recently, you might have seen a photo of a dashing man dressed head to toe in bright yellow.

Mr. LaMarr was an influential hairdresser to the upper crust of St. Louis.

Mr. LaMarr, an influential hairdresser from St. Louis, was selected by artist Mark Bradford as the subject of the latest “Modern Billings” project. Photo courtesy of the Modern Art Museum of Fort Worth.

Tiffany Wolf Smith — an assistant curator of education at the Modern Art Museum — helped get the photos up on billboards as part of a program called “Modern Billings.”

“Most of these billboards are in lower-income areas, and the artists get all the credit too,” Wolf Smith says. “We don’t put our logo anywhere, so it’s just artwork that is existing in these communities.”

The Modern worked with artist Mark Bradford, whose work is currently hanging in the museum.

Bradford didn’t take the photos. He selected them from the personal archive of a friend, but the images do speak to his own story.

“I like to make work with my life but not about my life,” he says. 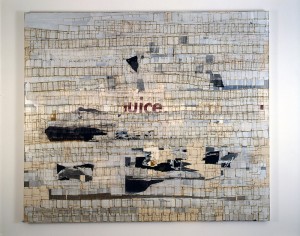 Bradford’s early paintings look like snakeskin or complex maps, but they’re actually made from the strips of paper used to wrap curls into perms.

He discovered the material working in his mother’s hair salon. The end papers also offer a subtle hint at Bradford’s path to becoming an artist.

“I was certainly a formed person before I went to art school,” Bradford says. “I was thirty years old. I was one of those people that fell through the cracks by the time I was in fifth grade. I was creative, but there was absolutely no architecture or structure around that creative Black child.”

Bradford has since expanded beyond end papers, but he still looks to the debris of daily, urban life.

His works look like worn-down billboards, created by sanding and tearing away mounds of paper and paint. 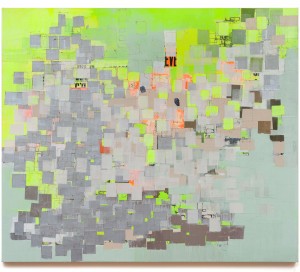 “I’m my own archaeological dig,” he says. “I dig, dig, dig on my own surfaces and I cover them up. Really, it’s about how much I’m willing to reveal and how much I want to cover up.”

Bradford uses everything from handbills to magazine clippings.

Messages about racial and socioeconomic disparities are hidden deep within layers of colorful paper that Bradford sources from advertisements collected around his studio in South Central L-A.

“I don’t take everything,” he says. “On a telephone pole, there’s advertisements of all different types. I only take businesses that have a direct relationship with that local community that generally, they’re probably exploiting.”

Bradford doesn’t just advocate for under-served communities in his paintings.

He also helped establish Art And Practice, a non-profit that provides access to creative resources and contemporary art to communities in South Los Angeles.

“We have to stop asking people to always get on buses and trains and come to us up on the hill and then, feel comfortable,” Bradford says. “What if we took these conversations, these shows and we had them in local communities. Then that makes it that these contemporary ideas don’t just belong to middle upper class, white art world.” 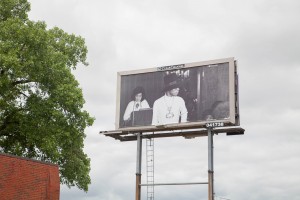 A billboard on Jacksboro Highway in Fort Worth featuring a photo of Mr. LaMarr. Photo courtesy of the Modern Art Museum of Fort Worth

The Modern’s billboard initiative is a small, but worthwhile, step in that direction.

Assistant curator Jesse Barnett says the museum hopes to extend its reach through public works like the photos of Mr. LaMarr that Bradford selected.

“Most of the other visual landscapes are total, commercial advertisements, so to have something which is completely just image-based and without branding,” Barnett says. It’s a nice interruption.”

An interruption that hopefully sparks conversation outside the walls of the Modern until its doors reopen.