Skip Navigation
Home > ArtandSeek.net > How Does North Texas Rate When It Comes to Educating Working Artists?

Does North Texas do a good job of educating artists? And how do our arts programs and universities compare with other major art centers?

Trying to answer those questions Monday evening was the Creative Conversation. That’s the annual panel discussion held at the City Performance Hall; it’s kicked off Dallas Arts Week for four years now. Led by Richard Brettell, vice provost and art history professor at UTD, the panel included academics — such as Sam Holland, dean of SMU’s Meadows School of the Arts — and working artists, such as Cora Cardona, founder and director of Teatro Dallas.​

Dr. Brettell’s opening question unfortunately shaped the entire hour-long discussion. He asked each panel member to compare the Dallas-Fort Worth area to other cities — even foreign capitals — when it comes to encouraging and developing professional artists. It was unfortunate because the comparisons this questions asks for quickly and inevitably lead to where most public discussions about the arts in Dallas-Fort Worth end up. Not with hashing out issues of education, gender and racial equality, arts funding, the need for affordable spaces, urban density or the like, although those certainly get touched on. 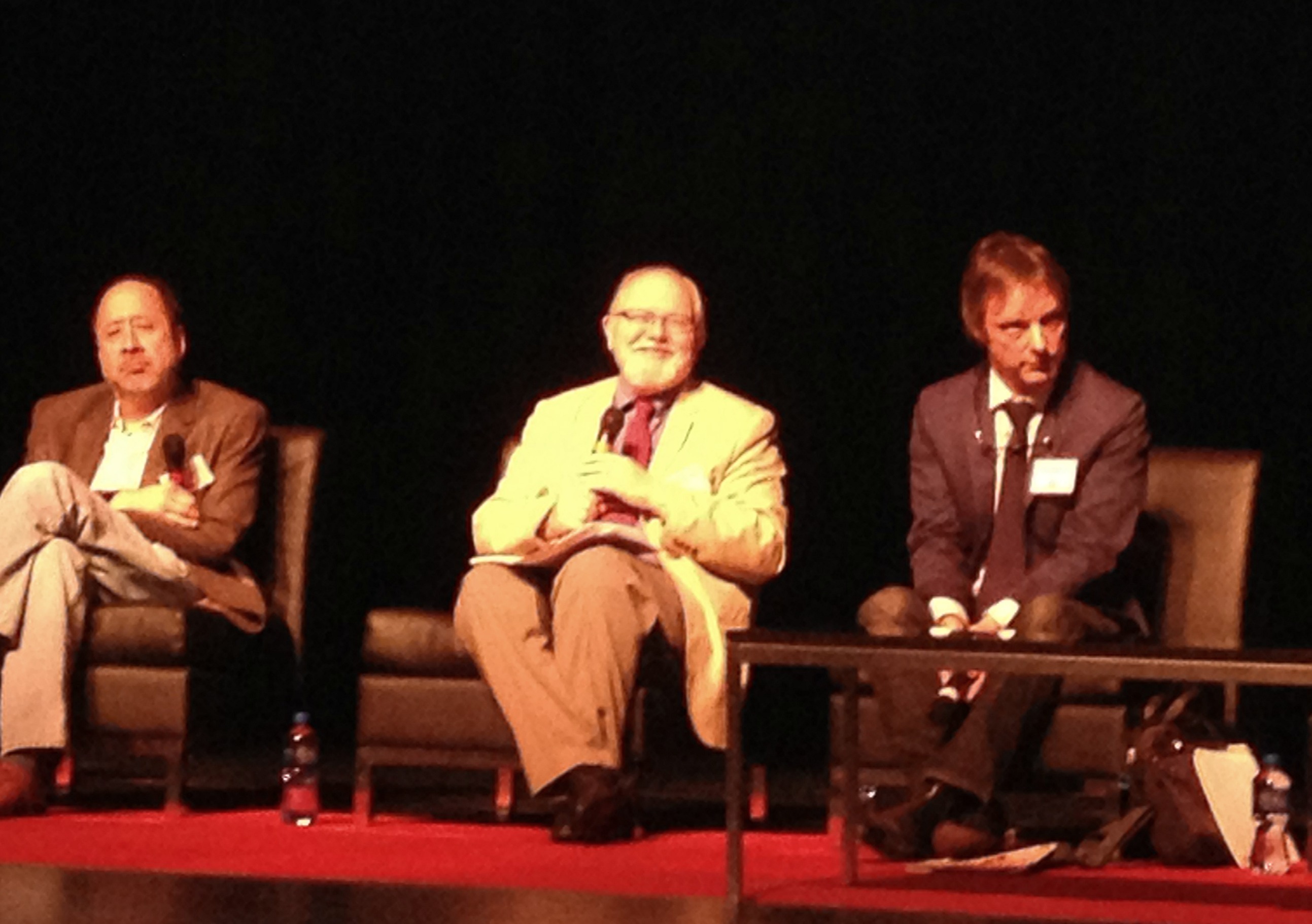 No. It leads to the endless tape loop about our self-image. These are the three choruses to be heard on that tape loop:

1) Dallas-Fort Worth is actually a welcoming area for artists. It’s an area that doesn’t simply consume culture; it actively produces young artists and homegrown art (demographically, we’re a young, rich, optimistic and aspirational city, a city of first-adapters — at least when comes to technology — and we have a rich Tex-Mex culture to draw on).

2) This is an infertile area that mixes backwoods ignorance with affluent suburban sterility (we’re religiously and politically close-minded, sports-crazy, anti-intellectual, culturally insecure, with few job opportunities for artists or an audience for them, we ignore our Hispanic and African-American heritage and have a monolithic, corporate mentality inimical to funding non-profit arts groups and artists).

Or 3) our area’s been bad in the past but it’s gotten considerably better the last decade (the development of the Arts District, Sundance Square, new college programs, the rise of lively, funky urban enclaves where artists and galleries thrive in both Dallas and Fort Worth, younger artists staying here or returning to settle here and, of course, the increasing national celebrity of choose-your-favorite-local actor/singer/writer/chef/filmmaker/musician/artist).

We heard from all three choruses — with variations, of course. But in his opening remarks, Dr. Brettell also made the point that a critical mindset is better for an arts scene than boosterism. We don’t learn much from boosterism. And for a critical eye being cast on the art scene, Dr. Brettell brought to the panel Richard Patterson, the noted British painter who’s lived here for twelve years. To start us off, Scott Cantrell, the classical music critic of The Dallas Morning News, and Dean Holland from SMU, both argued that when one considers the music programs of SMU, TCU, UNT and UTD together, North Texas has an impressive music education system.

But then Patterson said that, at least when it came to visual arts, our universities seem to be producing artists — hundreds every year — but where are they? Are they really any good? Because we don’t really have a local culture that’s conducive to art or artists. He compared the budget of the Royal College of Art as well as the government money spent in London on the arts — even under a Conservative government’s austerity budget — with what SMU, Dallas or even Texas spends. Patterson also objected to the way the visual arts are typically taught and to the coddled atmosphere of most university campuses when it comes to educating young artists.

And that pretty much established the conversational pattern — with people either defending or attacking the area’s arts education programs — but also, really, the North Texas arts scene in general and North Texas itself. Mostly, Patterson was the lone nay-sayer (though he argued that several of the academics on the panel would agree with him but couldn’t be forthright about their problems because they were publicly representing their university departments). In fact, UTD arts professor John Pomara declared, “I think the education in Dallas … is far from where it needs to be. We are all working really hard to make it better. When students ask me, I tell them, ‘Go to New York, go to LA.’ They’re the best places. If you can’t go anywhere else, Texas, I think, is the third best place to be … because between Dallas and Houston we’re creating a really strong scene in the visual arts scene and that includes the museums and galleries, and good students want to come to that environment.”

It should be noted that London and Los Angeles were repeatedly used as sticks to beat Dallas-Fort Worth with. Having been guilty of making comparisons between the local theater or literary scenes with those in other cities, I’d like to enact An Official Ban on All Comparisons Between North Texas’ Cultural Anything and Those In Either New York or Los Angeles. We always look bad, other cities usually do, too, but most importantly, while the comparisons may gratify our need for self-inflicted punishment or our scorn for all those supposedly unenlightened people we have to live with here, one actually learns little useful information from the comparison. If it’s not a per capita comparison, it’s generally fruitless. It’s far more enlightening to compare Dallas, Fort Worth or North Texas as a whole to similar areas of the same size and ambition. When both sides have the same resources, the same base line, we can see how another city has re-thought our same situation to create a different, perhaps more productive result. And then we can steal those ideas. Looking longingly at Manhattan can teach us only that things are much livelier when there’s so much more of everything especially corporate money and national media attention (but not affordable housing).

Case in point: LA. Here’s why the LA comparison is fundamentally flawed. The argument is often made (I’ve made it myself) that one leading cause for many of the hindrances our local arts scene suffers from is the North Texas sprawl. It’s impossible to forge the kind of collective, cooperative, generative intermingling that a ‘scene’ implies when artists and audiences have to drive a lifetime to get to a rehearsal or a concert. As Brettell himself noted — in citing the DFW Art History Network‘s discovery that there are 130 professional art historians in North Texas — “that is a number that is so large compared to Denver, compared to St. Louis, compared to Houston … and that made us think about what we can do together because all of these art historians were scattered all over the place.”

But then, people point out, LA is incredibly vast and scattered as well.  And just look at its arts scene. It’s far more vital than ours.

True. But consider: The greater Los Angeles metropolitan area makes up about 34,000 square miles. That’s big. That’s bigger than some states. And the DFW ‘metroplex’ is mighty big, too — it’s more than 9,000 square miles. So LA is a little less than four times our physical size.

Yet in terms of its population, Los Angeles has 15 times the number of people (18 million compared to 1.2 million). In other words, LA — as sprawling as it is — is far more densely populated than North Texas. We typically think of Manhattan as being dense, but there are substantial differences in suburban density, too. And with LA’s population filling that metropolitan area, there’s simply more opportunity to collaborate because there are more organizations. There are far more people, more artists, more patrons, more museums, more galleries, more concert venues, more funding sources, more audiences. That makes a huge difference.

In short, when it comes to DFW vs. LA — unless we’re using per capita examples — we’re comparing apples to pineapples.

Even so, amidst Monday night’s exchanges, several interesting nuggets popped up: