Skip Navigation
Home > ArtandSeek.net > How The West Was Seen – And Is Lived Today

Welcome to the Art&Seek Artist Spotlight. Every Thursday, here and on KERA FM, we’ll explore the cultural creativity happening in North Texas. As it grows, this site, artandseek.org/spotlight, will eventually paint a collective portrait of our artistic community. Check out all the artists and artworks we’ve chronicled.

The Amon Carter Museum of American Art has two new shows that are flip sides of the same coin – that coin being the American West. One exhibition is about making the Wild West into showbiz, the West as fabrication, education and vaudeville, while the other is about how the West is lived now by Native Americans in North Dakota. They are both different takes on what persists as the public image of the Amon Carter: cowboys-and-Indian art.

Jerome Weeks spoke with Amon Carter curator Maggie Adler about how the two shows connect history to the present – and reflect deliberate, ongoing changes at the Amon Carter.

As I understand it, the two current exhibitions were not created as a pair.

‘The Theatrical Wild West’ and ‘In Our Own Words: Native Impressions’ run at the Amon Carter Museum of American Art through October 7th.

But it’s hard not to experience them that way, to see contrasts and connections. The first is called ‘The Theatrical Wild West,’ curated by Shirley Reece-Hughes. And it’s about William Cody, Buffalo Bill, and his famous Wild West show. It ran for 30 years, toured the world. And the exhibition argues that Buffalo Bill helped shape some of our legends about the American West. Why? How did this traveling carnival of sharpshooters and trick riders in the 1890s influence – and still influences – such a huge part of our popular culture?

It’s this moment in which somebody could be a celebrity – because of the dissemination of mass media, because of ‘Harper’s Weekly,’ because of dime novels. So Buffalo Bill has his Wild West show at the Chicago World’s Fair. Millions of people are seeing that and they’re bringing home souvenirs. So part of what you’re seeing on the walls of the Amon Carter are these souvenirs – the flyers, the programs, the posters – because you could collect their photographs and have them in your albums. That’s true of Buffalo Bill, that’s true of Annie Oakley. 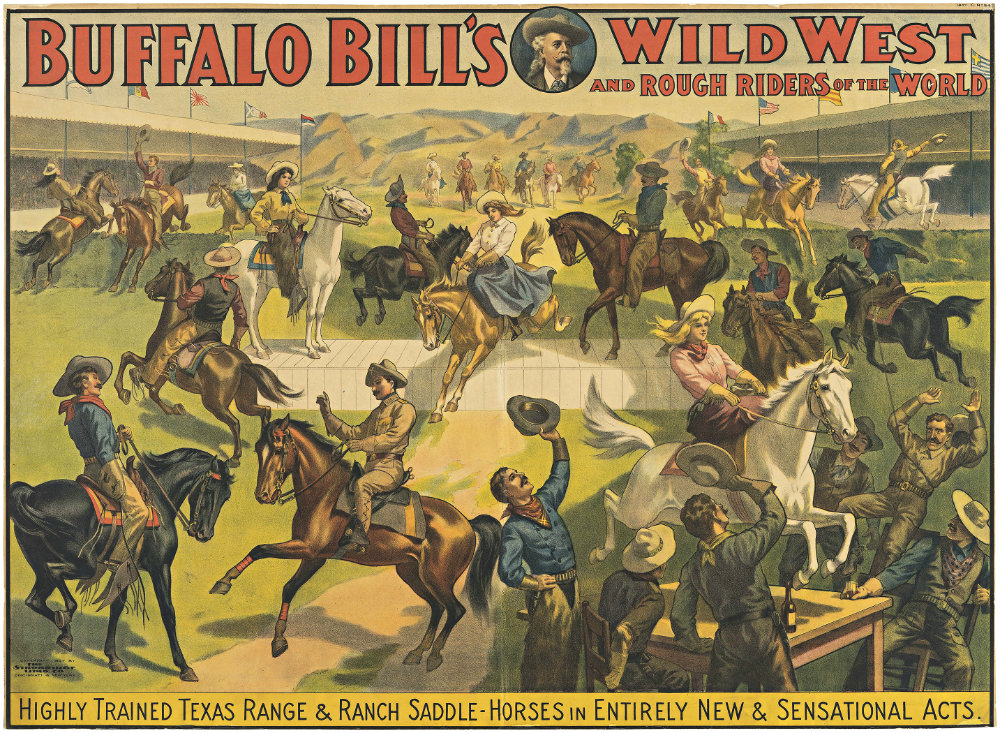 And really, if you think of P.T. Barnum and the circus,  that’s the same period of time that Buffalo Bill is operating, but there’s this great passion for tales and the romance – in quotation marks – of the American West that has international appeal. And really, that love of the frontier becomes the visual identity we associate with the West. My understanding is that before figures like Buffalo Bill, a cowboy was just someone rounding up cattle.

Larry McMurtry has claimed Buffalo Bill may have been the most famous person on the planet around the turn of the century – considering how many people saw his show and read the dime novels. Just in England in 1897, one million people saw his show, and this is before motion pictures or radio really take off. At the same time, McMurtry has described cattle drives as just hundreds of miles spent following a cattle’s behind – with a few moments of drunkenness and terror to break the monotony.

But now there’s this notion of the cowboy as a kind of knight, in the tradition of the European cavalier, the chaps and his hat are like his armor. They’re all part of the cowboy’s performative identity that is somewhat realistic, somewhat fantastical.

With his touring show, Buffalo Bill did encourage the Native Indian performers to set up camp and hunt buffalo. He wanted people to see their day-to-day lives. But then he’d also have them attack stagecoaches and fight the cavalry.  It all became theater.

It’s a combination of paradoxes. He really wanted to make entertainment educational. But Buffalo Bill gets his start in show business by playing his own character onstage. And so there’s just a very fuzzy line between what he actually experienced, what is educational and what is for entertainment value. And I don’t really know, but I suspect he doesn’t really know the distinction. 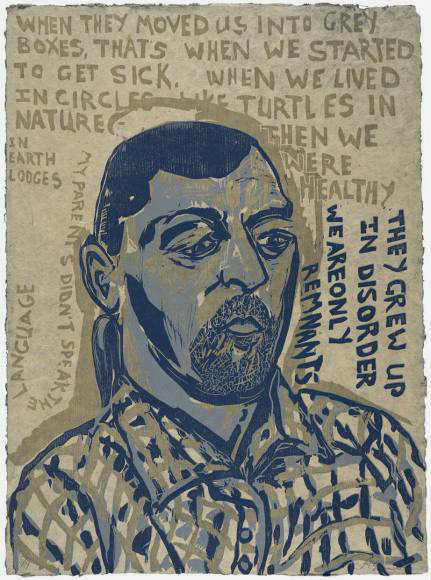 Part of that international appeal of the West you mentioned, that mythology o the frontier, comes from the paintings of Frederic Remington and Charles Russell, some of which are included in the exhibition. And they both were friends of Cody –

– and some of their paintings are inspired by his show. Those paintings later influence Hollywood directors in search of the ‘authentic West.’ And that mythos still holds in pop culture, something Buffalo Bill helped create.

John Ford bases many of his Westerns on Remington imagery. What people don’t really think about Remington is that he lived basically about 15 minutes from where I grew up in New Rochelle, New York. So he was a New Yorker, catering to Eastern audiences, catering to this illustrated press. And so it’s kind of a continuous lineage of Remington experiencing the West through Buffalo Bill and some trips out west, but mostly out of his imagination, making these images that then become the version of the West that Hollywood takes up.

When we step into the next exhibition, we move from all the guns-a-blazing drama of Buffalo Bill to a deeply personal collection of some two dozen woodcuts. The show’s called ‘In Our Own Words: Native Impressions,‘ and these are profiles of contemporary Native Americans, created by artists Daniel Heyman and Lucy Ganje, which the Amon Carter recently acquired.

And that step from one gallery to the next – it’s  a real shift.

Yeah. When you go to the exhibition, you’ll notice that it’s very darkly painted and very darkly lighted. And that’s on purpose. That’s  intended to create a pause – so that you are thinking, ‘Oh, these are individual people’s stories that I’m seeing on the walls of the museum.’ And you get a sense of the variety of experiences of people living in North Dakota today – everything from a university president to a politician to someone who runs the local cafe. A lot of the common themes that emerge are the devastating effects of forced assimilation through boarding schools, the loss of language, a very great concern for the environment. So it’s community issues reflected through individuals and also individual stories. 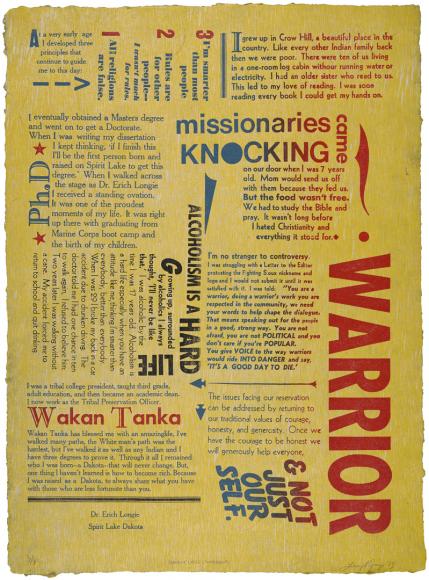 We hear from Native Indians the way we never hear from them in “The Theatrical Wild West.” Some stories are heartrending, some heartwarming. There’s this repeated sense of isolation – they feel disconnected. But there are also expressions of persistence. Some of them do come from the Standing Rock reservation [one of the centers of the Dakota Pipeline resistance].

‘In Our Own Words’ is not without drama. You know, I think these are very, very personal accounts but very rewarding to understand people from multiple perspectives. The people whose portraits are on the wall are not just up there because they are native peoples. They have interesting stories.

And that is part of what we’ve been trying to do at the Amon Carter over the past couple years is connect the historical to the present-day.