Skip Navigation
Home > ArtandSeek.net > In Oak Cliff, Day of the Dead Is A Way of Life

Day of the Dead has exploded commercially in recent years. You can find costumes in party stores and home décor at Target, but in Oak Cliff, the Latino community is cultivating the traditions that make the holiday unique.

The Oak Cliff Cultural Center’s gallery of altars is open. They’ll be hosting a reception Friday from 7pm-9pm.

It’s the Friday before Dia de Muertos and people are starting to trickle into the Oak Cliff Cultural Center (or the OC3). Tables have been set up along the walls of one of gallery spaces for altars. Selina White’s tribute to her grandmother is already coming together. 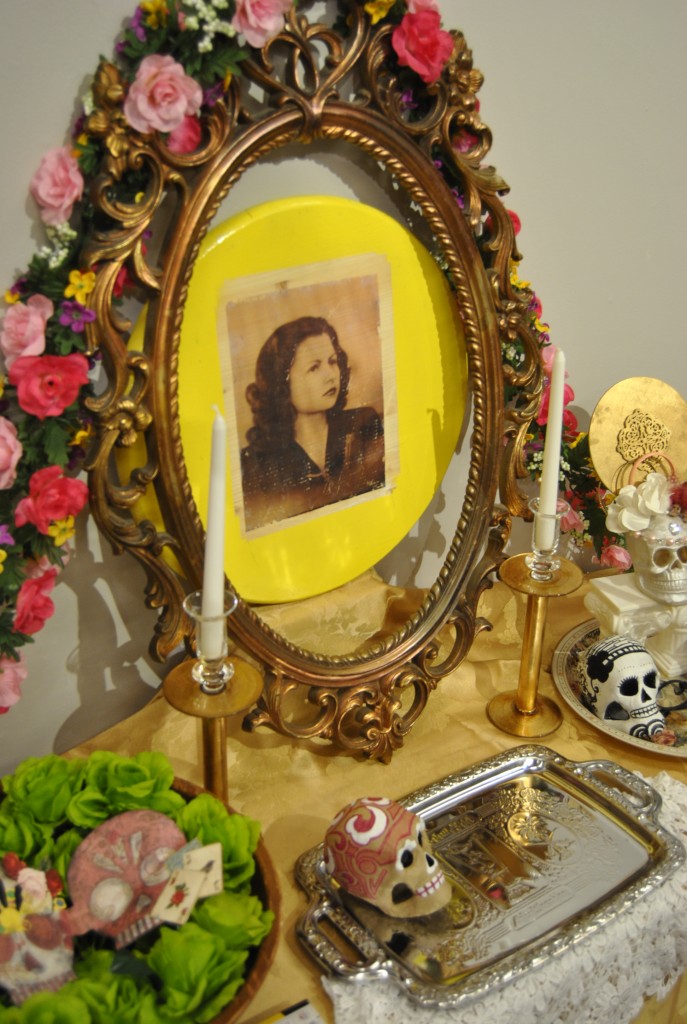 Selina White’s Day of the Dead altar is a tribute to her grandmother. Photo: Miguel Perez

White takes out a yellow, wooden disk from a duffel bag that has had an image of her grandmother transferred onto the wood.

These elaborate displays are at the heart of the holiday, and all the decorations have meaning, like the cards White has laid out. She also sets out a selection of ornate skull figurines and playing cards.

“She actually was a card player and people would come to her house and she would deal cards and they would have Ranchera music all night long and she would gamble all night,” she says.

Gerardo Robles, the center’s programming coordinator, says the OC3 puts on workshops weeks ahead of Nov. 1 so people can create items for their altars.

These elaborate ofrendas, or offerings, are meant to attract the spirits of loved ones by setting out food, spirits, candles, and brightly-colored ornaments. If it looks like a party you can’t help but crash, then you’ve done it right.

It’s a way of celebrating life. Some of the traditional decorations include calaveras (skeletons), papel picado (colorful paper cut into designs), cempasuchil (the quintessential golden marigold), and pan de muertos (a semi-sweet bread shaped like bones).

Manuel Maroches owns a Maroches Bakery on Davis Street a few blocks away from the center. Every year, he hosts a festival with vendors, workshops, and live music in the lot outside the bakery. If you step inside, you’ll see another altar practically spilling over with framed photos, figurines, toys, and art.

“You gather stuff that represents their whole life, de nacimiento a la muerte,” he says.

From birth to death. It’s a belief rooted in indigenous Mexican cultures, according the UT Arlington anthropologist Isabel Montemayor.

“Most of their calendars were cyclical, so life also kind of reflects this idea,” she says. “You live your life, but then there’s a second life that’s connected to it.”

She says the holiday became popular in the U.S. in the 60s and early 70s when the Chicano Movement embraced it as a way for Mexican-Americans to reclaim their ancestry.

“People started doing their homework in trying to understand their roots and where their traditions came from,” she says. “Dia de Muertos was the perfect way to do that.”

From there, the holiday took off. Today, even Disney’s on board. The upcoming Pixar film, “Coco,” is set in a Land of the Dead that uses the traditional imagery seen in Day of the Dead.

A couple of blocks from the OC3, Cindy Pedraza is planning her own Day of the Dead at CocoAndre. She co-owns the chocolate shop with her mother, Andrea. This seemingly newfound popularity is conflicting for her.

“Great, people are embracing us, but I think our culture is very easily used, taken and people take pieces that they like and go with that,” Cindy says. “But we’re still looked down upon, especially now in this time and era, we’re targeted. We’re not equals but our traditions and our things bring money.”

The pair have been making chocolate calaveras, or skulls, for Day of the Dead since the shop opened in 2009. Before then, Andrea says her celebration was more private.

“I was an immigrant,” she says. “I just celebrated quietly. I remember putting my altar at night, but it was simple. Candles. Flowers. Something from my grandmother, and that was it.”

Now, their annual party attracts hundreds, many of them Mexican-Americans looking to reconnect to traditions or immigrants looking to celebrate with their new community.

Back at the OC3, Ofelia Faz-Garza uses a red wooden birdcage as the centerpiece to an altar dedicated to Chicano writers.

“We’re going to leave the door open so people can write notes to the authors that are honored at the altar and they can just slide them into the birdcage,” she says.

Faz-Garza is the founder of the Meet Shop, a community group that celebrates Latinx culture. A copy of José Antonio Burciaga’s book, “Drink Cultura,” sits front and center on her altar. 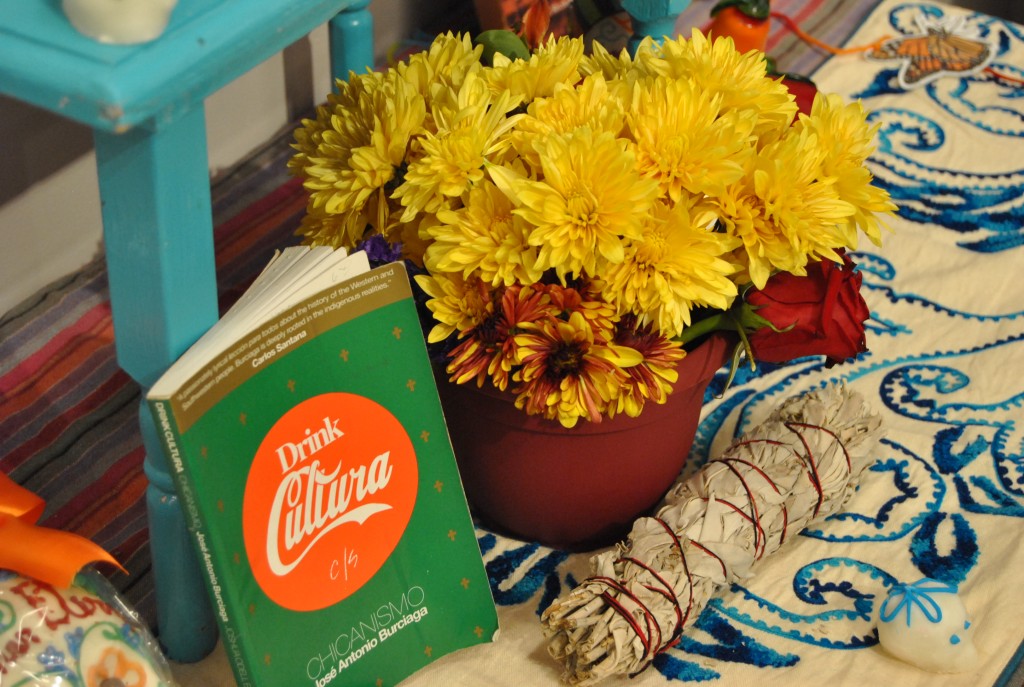 The Meet Shop’s altar is dedicated to the greats of Chicano literature, as founder Ofelia Faz-Garza puts it. Photo: Miguel Perez

“We feel like there’s not enough recognition, not enough exposure of the works by these writers,” she says. “What better venue than a Dia de Muertos altar, an ofrenda to them.”

It’s getting dark, but the center will stay open late tonight. A garland of paper monarch butterflies adorns the edge of Ofelia’s table. They’re just one of the many symbols in a holiday that’s full of them.

Robles says the OC3 hands out the paper monarchs for those who want to participate but don’t have an altar. They write the names of loved ones before they’re hung on garlands.

“It’s tradition that this time of year, you see monarch butterflies,” he says. “If you see one kind of pass by you that’s a loved one visiting you. Celebrating this culture, especially making the altar itself is a unique process because you really do feel connected to the spirits. It really brings a different light to death.

Keeping the traditions behind Day of the Dead alive – and sharing them – may make sure that light doesn’t flicker out any time soon.