Jesse (Jessica Cavanagh) and her mother, Thelma (Amber Devlin) may be the only two actors on stage in Echo Theatre’s production of “‘night, Mother“ by Pulitzer Prize-winning author Marsha Norman, but

the deceased father, friend Agnes, brother, son and ex-husband are crowding the stage unseen. They come to life for us as mother and daughter reveal truths about their relationships, jealousies, affairs, accidents and cover-ups.

The rural home mother and daughter  share appears ordinary and warm. The linoleum tablecloth, afghan-covered couch and refrigerator magnets set the stage well for unexpected surprises: a cacophony of disturbing noises , disruption and destruction. It is Jesse’s obsessive organization that offers a clue to a potentially tense situation. Every piece of silverware, every pot and pan is in place. She has organized their home and her mother’s life, but she is unable to organize or control her own life. Nothing is in place there. 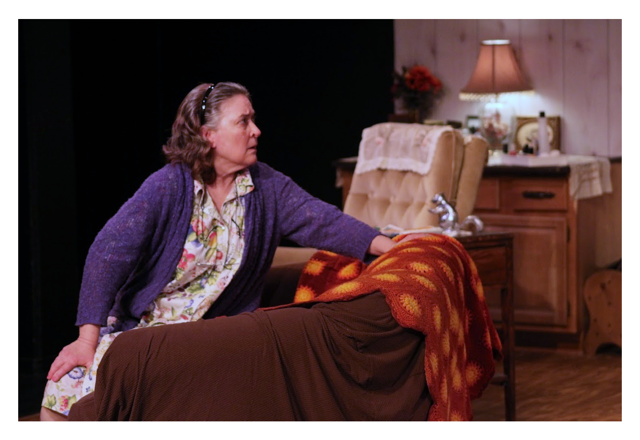 The sense of calm is shattered early in the play. After the ritual of polishing her mother’s nails, and after the pair enjoy some conversation, Jesse tells her mother she plans to shoot herself with her father’s gun, that she’s yearning for a “dark and quiet space”.

What ensues for the next 90 minutes in this one-act play is just the opposite. It is a very loud space with non-stop movement, directed by Christie Vela,  a  former member of the Dallas Theater Center Brierley Resident Acting Company. We follow the actors up the stairs, gathering towels, cleaning the gun, walking  and washing. Mother and daughter fire words at each other as if they were firing guns. We sit straight in our chairs watching and listening especially carefully for clues as to why Jesse would want to die. Early on we hear the words we need to remember:  Epilepsy. Hospitalizations. Ambulances. Lost jobs. Divorce. Wayward son.

As the clock ticks toward the inevitable, Jesse and Thelma’s conversation is a shouting match of accusations and admissions. The volume is high. The punches – and even punchlines offering comic relief – come quickly as the two debate the deed. Relationships with Jesse’s father, family and friends are fleshed out. Festering wounds are opened and bleed. Because the actors are so convincing, we share the pain. Secrets are revealed, and we share the shame.

Jesse confesses to having planned to kill herself for ten years. She says she has nothing to live for. She doesn’t even know “what she really likes.” She is “garbage.”

“I’m just not having a good time”, she says. “The world is not fair…I’ve had enough”. 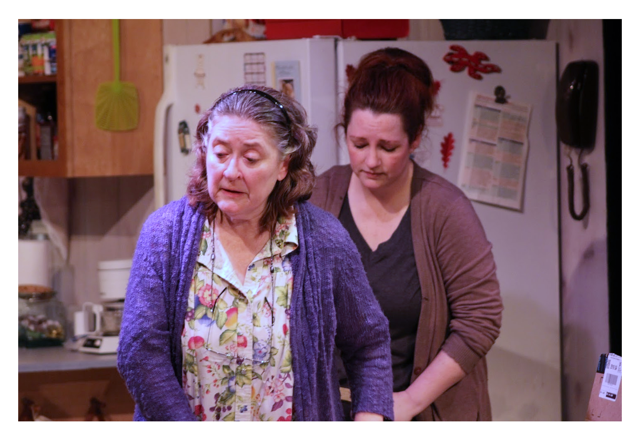 And as her mother’s manicurist, caretaker, cook and companion, she wants to “get off the bus because she can”. And we somewhat understand. Jesse is suffocating. Her fear of epileptic fits has overtaken her life. She does not leave the house. She is not allowed to drive. She has no hope. She is joyless, friendless and forgotten, and her Mother (Mama) is arguably to blame.

Interestingly, when faced with real opportunities to stop Jesse, her mother does not. Three times, she picks up the phone to call for help. Three times, she hangs up. She seems actually resigned to the deed, even as she wrestles Jesse with words and limbs. She thinks only of herself. “I need you,” she screams. “How can I live here without you? I thought you were mine.”

Isn’t it always the Mother’s fault? In this case, it seems to be.