Skip Navigation
Home > ArtandSeek.net > It’s Been A Month, And Most Museums Still Haven’t Opened. Why?

These days, the state’s COVID guidelines say that with some restrictions, we can visit bars, restaurants, stores, even zoos. But it’s been a month since Governor Abbott permitted limited reopenings for Texas museums – and the great majority remain closed. Why? And what’s happening with the museums that have reopened?

It’s a sunny Saturday afternoon, a prime time for visiting museums. At the Museum of Biblical Art in Dallas, the entrance door is locked. But there’s a paper sign. It says, for admission, twist the doorbell.

Almost immediately the door opens. “Welcome to the museum!” Scott Peck says and introduces himself as the MBA’s executive director. It’s rare to be greeted personally by a museum’s director, but these are unusual times: I’m only the third visitor he’s had all day. 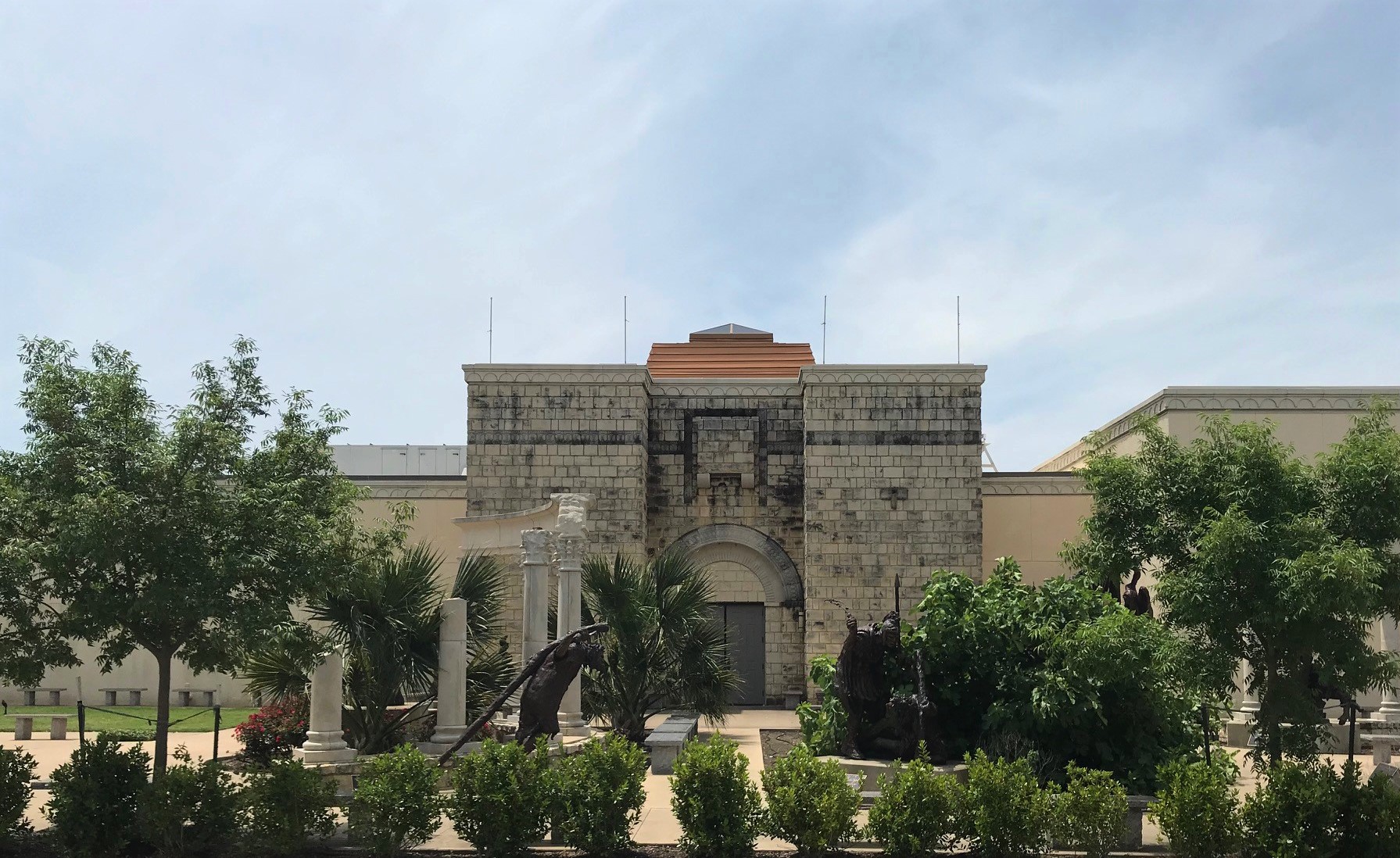 The Museum of Biblical Art in Dallas, featuring its Via Dolorosa Sculpture Garden or Stations of the Cross with sculptures by Gib Singleton. Photo: Jerome Weeks

Peck says since reopening in early May, the museum’s daily attendance has varied widely. Mother’s Day drew 22 people. Pre-pandemic, it would’ve been hundreds. Yesterday, it was one.

Peck himself isn’t wearing a face mask, but he reminds visitors about safety precautions. The museum’s water fountains are taped off. And when you’re the only person wandering past video displays – your footsteps echoing through the gallery — practicing social distancing isn’t that hard.

More or less, the same situation holds true for the Tyler Museum of Art and the Longview Museum of Fine Arts.  Both small East Texas museum reopened in early May.

Christopher Leahy, the Tyler museum’s executive director, says, “When we opened, we had a week of kinda watching to see how it worked. And we haven’t had a problem with it. We’ve had a small but steady stream of visitors. “ 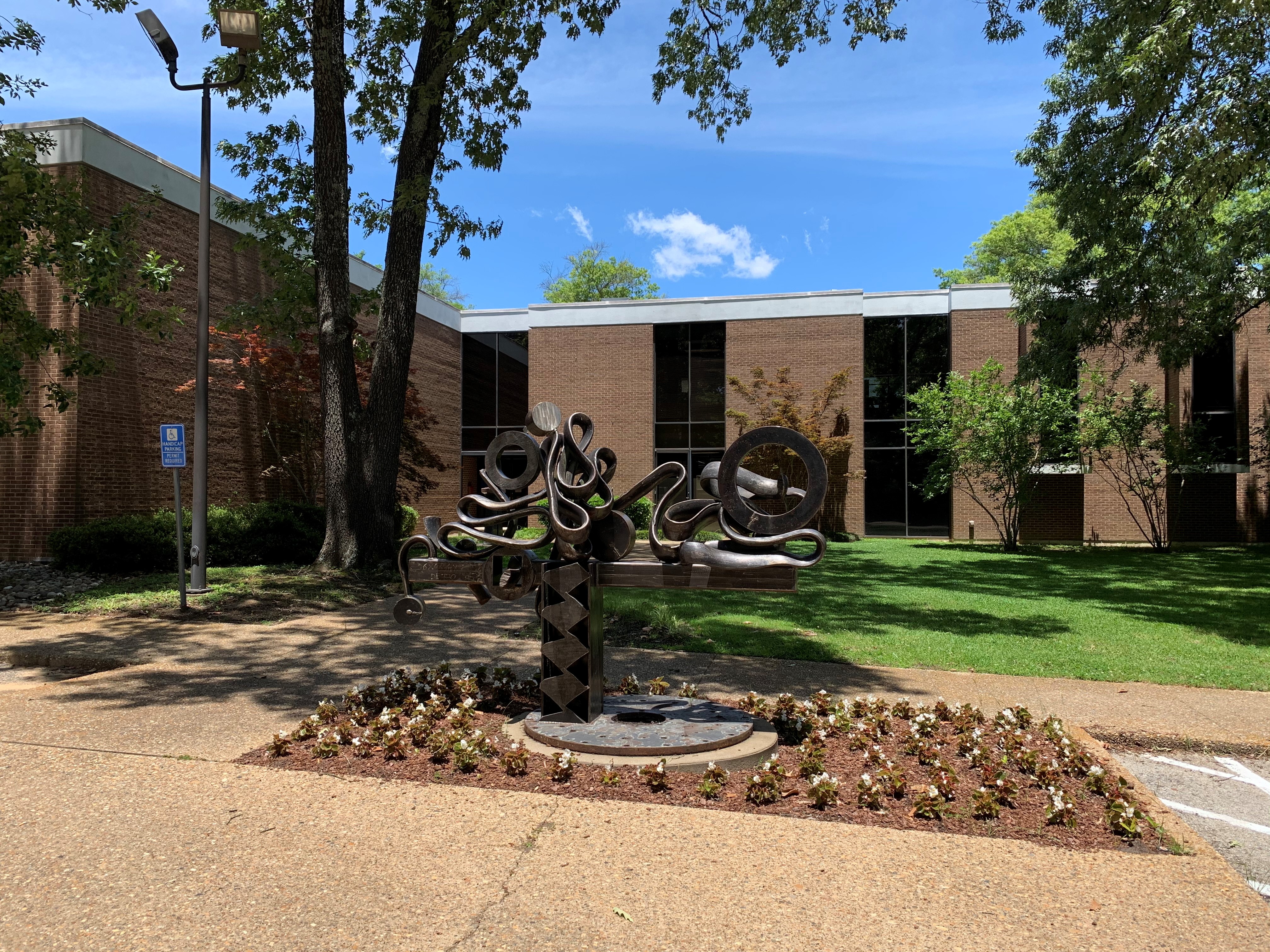 Even in the most glamorous museums, we humans have a tendency to crowd around that one favorite artwork. It’s the “Mona Lisa effect.” And it’s been a fear for museum officials planning on reopening safely. Should they have a guard standing by to prevent art herds? Should they put up velvet ropes?

But Leahy says visitors seem perfectly content to keep their distance on their own.

In which case, why haven’t more museums risked reopening – when stores and hair salons have?  One reason: The Tyler Museum has only two galleries; they’re easily monitored. Fort Worth’s Modern Art Museum has 14  – with a dozen sub-galleries. Dustin van Orne is the museum’s marketing director. He says it can’t afford a guard in every gallery.

“There’s still a lot of things we haven’t figured out,” he says. “We’re also working with a lot of the other museums in trying to create a uniform experience.”

That way, we’ll know what to expect whichever museum we go to.  The American Association of Museum Directors and the American Alliance of Museums have been sharing suggested protocols to keep staff and visitors safe. Houston’s Museum of Fine Arts, one of the larger museums to reopen, is requiring visitors to have face masks; it’s also set up a temperature check to see if they’re running a fever.

Of course, particular museums with hands-on exhibitions for children — like the Fort Worth Museum of Science and History — face a nightmarish task. Doug Roberts is the museum’s public engagement officer. He points out that hands-on exhibits are expressly forbidden by the new guidelines. Yet hands-on learning is at the heart of the museum’s mission. 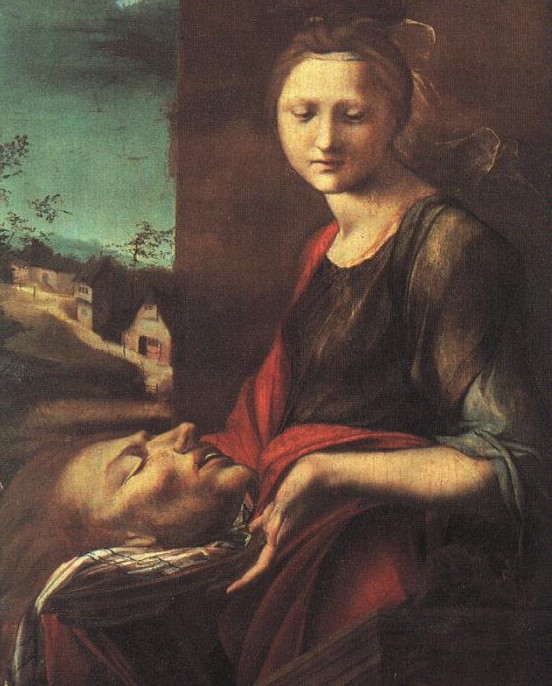 “Our history has been one of hands-on learning for 80 years,” he says. “So we have to extract the hands-on. And that’s actually a pretty big challenge for us because we were really infusing hands-on things through everything.”

So museum officials are re-thinking different exhibits –which has been taking time, trouble and money. Do they limit some in various ways? Or just simply put up a “hands off” sign on them?

Other museums are sharing the results of ‘early adopters.’ This kind of sharing of information is going on at the state level, the North Texas level, even the just-across-the-street level. Agustin Arteaga, director of the Dallas Museum of Art, says the three museums kitty-corner from each other in the Arts District — the DMA, the Crow Museum of Asian Art and the Nasher Sculpture Center — are hoping they all might be able coordinate things so they can reopen at the same time. Make a bigger splash, draw more visitors down to the Arts District.

Even so, says Mark Roglan, director of SMU’s Meadows Museum of Art, “each museum will be different in the sense that we all have different buildings. And so we’re looking at the different ways how the flow runs in this building.” 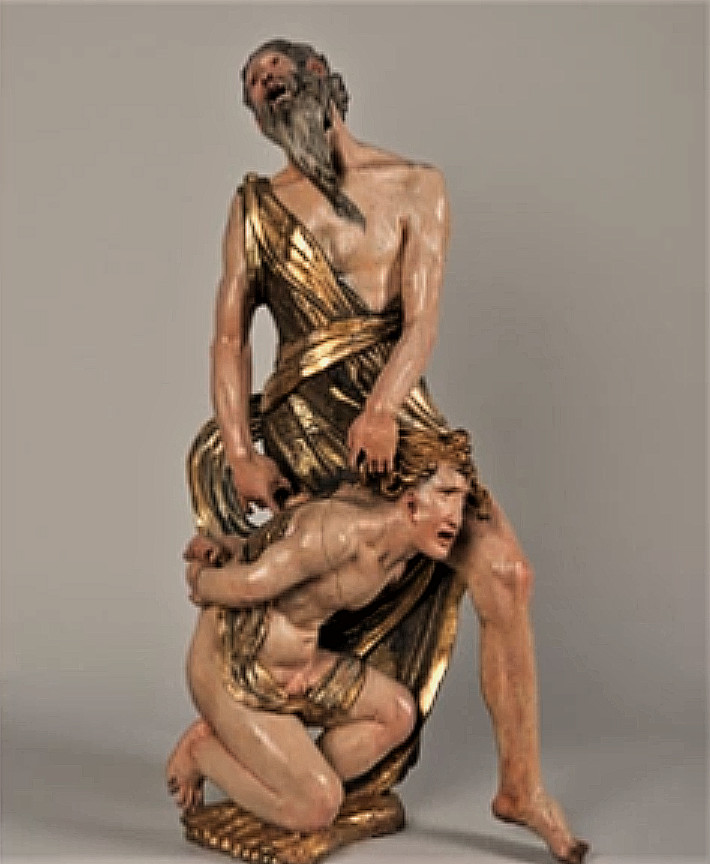 “The Sacrifice of Isaac,” by Alonso Bereguette

When we consider “the museum experience,” we mostly think in terms of just walking and looking. That apparent simplicity disguises the fact that we wander through gift shops, installations, sculpture gardens, restrooms, cafes, all of them different environments. Simply putting up a sneeze shield at a cash register doesn’t guarantee safety.

There’s also another major headache for museums. Basically, their supply chain has jammed up.

The Meadows Museum had a landmark show of Alonso Bereguette’s art – set to open March 29th. The 16th-century sculptor and painter worked with Michelangelo himself for ten years and took his Renaissance training back to Spain, combining it with (but also transforming) that country’s art. Yet he’s been called “the Old Master you’ve never heard of.” You’ve never heard of him because the show, “Alonso Bereguette: First Sculptor of Renaissance Spain” opened at the National Gallery in Washington and was to continue only to the Meadows. And would be the first major tour of Berebuette’s artworks in the US – ever.

But as the Dallas opening approached, Meadows officials found themselves in a race with the coronavirus. Spain and Italy were closing faster than the US.

“Most of the exhibition was already installed,” says Roglan. “And one of the paintings made one of the last flights that left Rome before all the airports were shut in Italy.”

The museum’s luck didn’t hold. A week before the opening, it was Dallas that shut down. Roglan got on the phone to the National Museum of Sculpture in Vallodolid, Spain – the exhibition’s leading lender.

“When we had to close,” Roglan says, “I called this museum director and I explained the situation, and I said, ‘Look, if we were able to move this to the fall, would you say yes?’ And informally, she was supportive.”

The other lenders fell in line. The result?  The Meadows now has a sizable collection of Old Master drawings, paintings and sculptures  — locked up in its galleries until September when all of SMU might reopen. 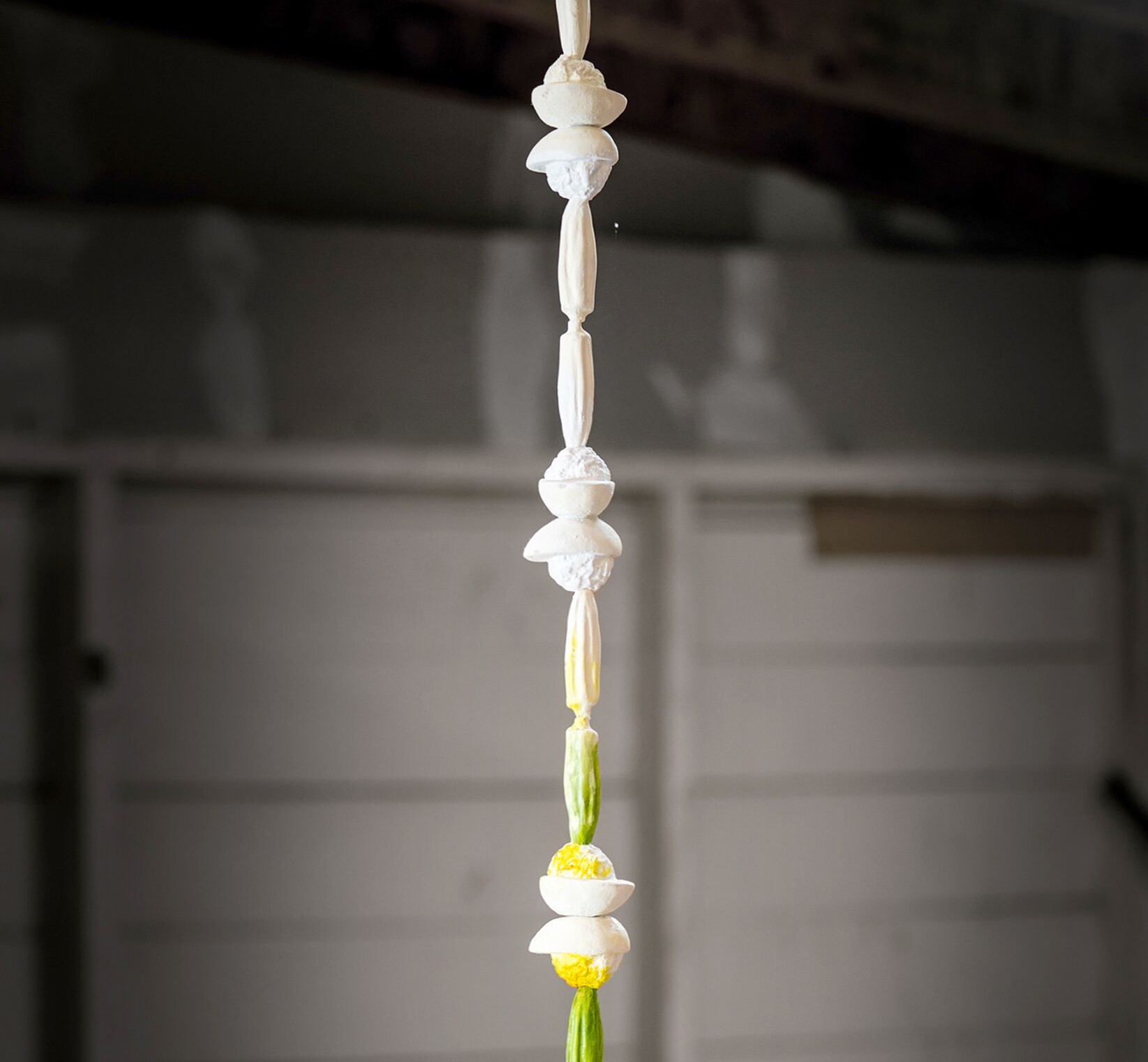 But museums like the Meadows or the Kimbell or the Dallas Museum of Art – ones that host international tours – they’re in a vast network of private collectors, galleries, governments, foundations and other museums, carefully planning how they’ll share artworks. So when one museum is forced to hang on to artworks or has to close a show early, it can domino through the system, wrecking plans that took years to put in place.

The Modern’s Dustin van Orne says, “We have a lending structure, and I think that this whole COVID situation has thrown a wrench into that schedule for everyone. “

Jeremy Strick , director of the Nasher Sculpture Center: “For our part, we’ve effectively moved the clock back a year.” What was planned for this summer is hoped for next summer.

With major art tours in limbo, Strick foresees museums showcasing  their permanent collections more and connecting to their communities more – like the center’s Nasher Windows effort, making sculptures visible to the street audience walking by. He also advocates more public artworks through collective efforts with states and cities, and is even considering the possibility of increasing the Nasher’s microgrants to local artists.

As for all the activities that museums raced to push online to compensate for the loss of lectures, classes and tours, Strick says, that’s the new normal. “You’ll be seeing a lot of museums with a more robust online presence.” 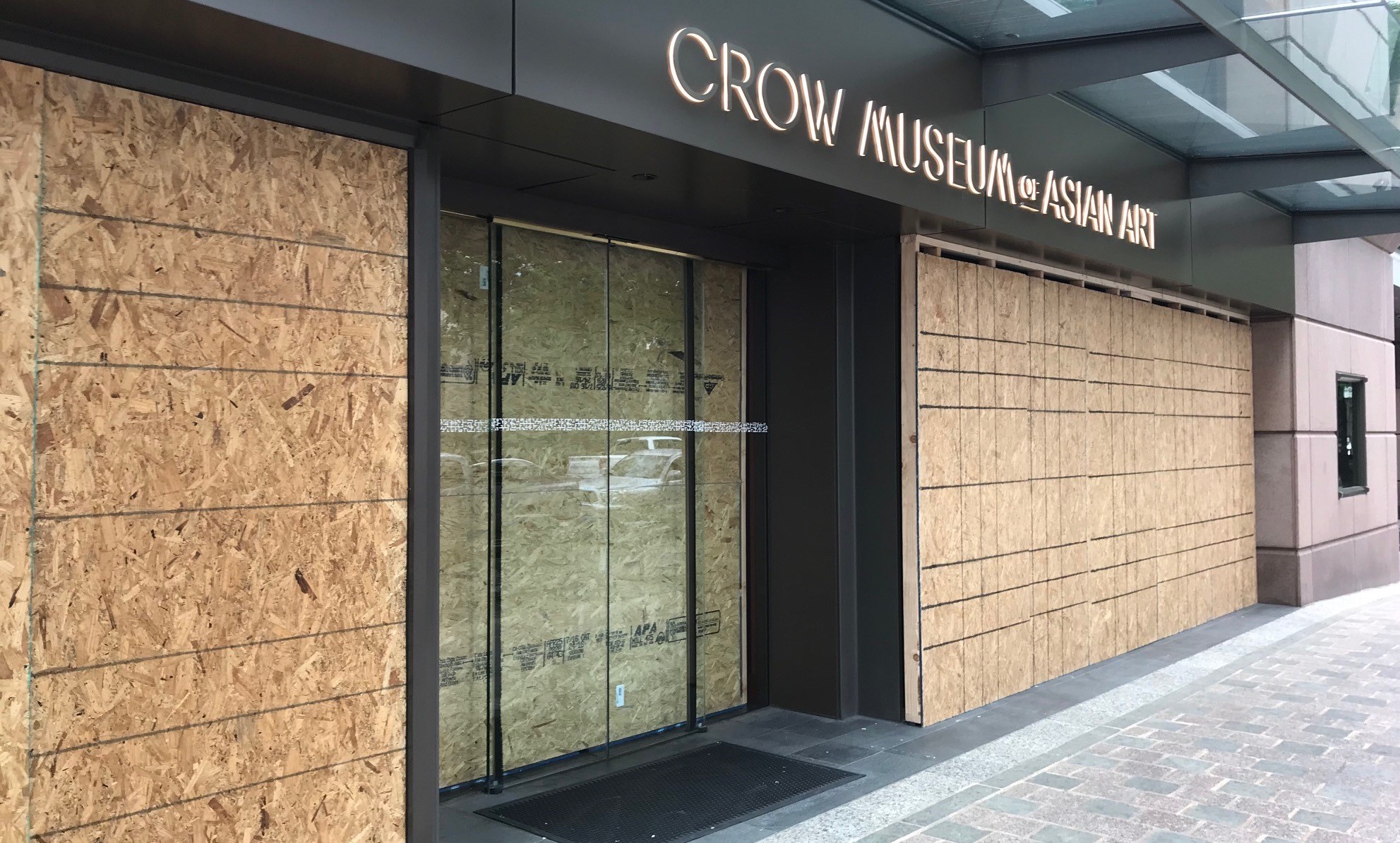 Finally, museums have a right to be wary about risky moves like reopening before they’re ready or before COVID-19 is under control: In March, the American Alliance for Museums reported to Congress that as many as 30 percent of the country’s museums  could fail during the pandemic.

During last Saturday’s protests over the death of George Floyd in police custody, three museums in Dallas had windows broken. The museums now are partly boarded up for protection against further damage. But officials say the vandalism hasn’t seriously affected reopening plans – possibly for next month. Amy Lewis Hofland, director of the Crow Museum of Asian Art, says she’s waiting to see two weeks of declining COVID infections before seriously considering reopening.

Until then, the museums will continue what they’ve been doing. Monitoring what’s happening with museums that have already opened, watching the COVID reports, setting up a timed ticket system to limit visitors per hour.

And stockpiling hand sanitizer, masks and gloves – in preparation for the patrons who’ve yet to come.