Art&Seek is highlighting new music from North Texas every Thursday. Click above to hear me talk with singer/songwriter JMES for our Music Minute, which airs on KERA FM and KXT 91.7. For more North Texas music, tune in to the KXT Local Show at 7 p.m. on Thursdays. And tell us what you’ve been listening to on Facebook, Instagram or @artandseek on Twitter. 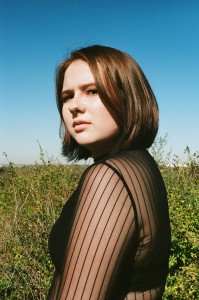 Twenty-one-year-old Caroline Baker prefers to leave everything on the table when it comes to songwriting. She describes her music as heartbreakingly honest and uses creating music as a therapeutic experience.

“I do my best to be as honest as I possibly can because I’m looking at myself and then when I write the song… I get to leave it all behind and then take a step forward into my personal growth,” Baker said.

Baker performs under the moniker JMES (pronounced James) as a tribute to her late grandfather, who worked in prison ministry, and credits him as one of the major influences in her life. 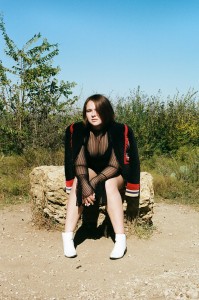 This vulnerability can be heard in Baker’s new single, “Ready to Love Again”, which is the follow up to – “Hopeless Romantic”- her debut release which dropped back in July.

“Ready to Love Again” was produced by Josh Goode and showcases Baker’s vulnerability with her gentle, breathy voice singing lyrics like “I loved you once/but broke you twice/let’s not keep that in mind/’cause I don’t want anybody else.”

She wrote “Ready to Love Again” about her childhood sweetheart –  and they have since reconnected. Baker tried to capture that strong connection of real love in the song.

“It’s all about falling in love and not wanting to let go of that person or that feeling,” Baker said. “It’s really shown that everything- distance and time and all the different things that life can throw at you- that nothing really stands in the way of that connection.”

Baker is looking forward to performing live as JMES and is putting together a six song EP to be released in 2021. You can find all her social handles here to keep up with her EP release, new music, and shows as they arise.