Skip Navigation
Home > ArtandSeek.net > Kick Off Fall With This Trio Of Innovative YA Graphic Novels

Get ready to get woozy, get groovy and yell “Yee-ha!” September sees the arrival of a handful of audacious new graphic novels aimed at the young-adult crowd. With settings ranging from a contemporary Chinese-American community to the Old West, this trio of books tackles such unexpected topics as irritable bowel syndrome and transgender history with a combination of wit, heart and visual flair. It’s a good month to be a preteen — or to read like one. 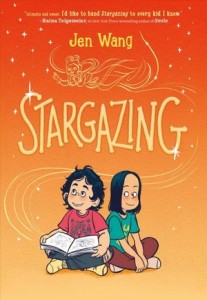 Jen Wang, author of the delightful The Prince and the Dressmaker drew on personal experience for parts of this story, in which a young girl is diagnosed with a brain tumor. (Wang herself had to have a brain tumor removed when she was six.) But much of what’s great about Stargazing has little to do with how Wang handles that subject. The book comes to life thanks to the vividness of its two main characters, Christine and Moon. When Christine’s parents rent out their carriage house to a new family, the shy preteen violinist gains an unpredictable, energetic and endlessly beguiling new friend in Moon. Suddenly Christine finds herself signed up to appear in the school talent show — not to play her violin, but to perform in a dance group inspired by Moon’s favorite K-Pop star. Moon’s effervescence is inspiring to Christine, but also a little scary. Moon says she has visions of people up in space communicating with her. “That’s why I’m so different from everyone,” she explains. “I’m actually a celestial being, like the ones in my sketchbook. Someday soon I think they’re going to come get me.” Wang is pitch-perfect when it comes to complex relationship dynamics and the subtleties of growing up Asian in America. Her art is a supple balance of quirkiness and relatability. Christine’s expressions reacting to her kindly but clueless parents are just priceless. Moon is so suffused with bouncy, chaotic energy, she seems almost to levitate — especially when she’s showing Christine new dance moves. Stargazing really sparkles. 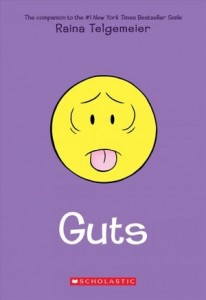 She’s stormed bestseller lists and won multiple Eisner Awards with the graphic memoirs Smile and Sisters. Now Raina Telgemeier returns with a soul-baring account of her youthful battles with anxiety and irritable bowel syndrome. Featuring Telgemeier’s trademarks — bouncy artwork, wry wisdom and plenty of laughs — Guts finds broad resonance in an unusual problem. Starting around fifth grade, young Raina develops a fixation on, and fear of, throwing up. “I didn’t puke,” she recalls of one occasion when the feeling seized her. “But the thought that I might was worse than if I actually had … ‘Sick’ isn’t quite the right word for it. But something was definitely wrong.” As she grapples with her fears under a helpful therapist’s aegis, she faces a gamut of challenges at school: Michelle, the mean girl who sits next to her in class; the terror-inducing prospect of presenting an oral report; the possibility that her best friend may move away to the other side of town. Telgemeier writes about each new development with nicely modulated optimism, intermingling positivity with an ironical matter-of-factness. When a teacher tells Raina, “perhaps you and Michelle can become allies instead of adversaries,” young Raina knows the real message. “In non-teacher-speak, that means, ‘If I’m nice to you, maybe you won’t be so mean to me,’” she thinks. “You first.” Telgemeier’s down-to-earth style is as winning as ever, making its unusual topic instantly relatable. 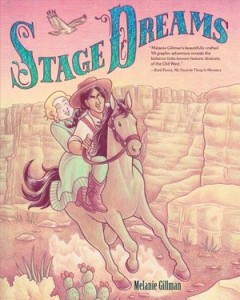 As in 2017’s As the Crow Flies, the irresistible attraction in Stage Dreams is Melanie Gillman’s radiant colorwork. Using colored pencils, Gillman painstakingly fills in layer upon layer of heathery tones until each page seems to breathe. Their glowing, autumnal palette is perfect for this story of heists and hijinks in the Old West. Fleeing conscription into the Confederate army, Grace, a trans teen from Georgia, boards a stagecoach heading across the New Mexico Territory. In short order she’s kidnapped by the notorious Ghost Hawk — actually Flor, a female bandit with dreams of retiring to a goat farm of her very own. (“Goats?” asks Grace. “Only livestock that’s useful and smart,” Flor explains.) Flor plans to sneak into an upcoming gathering of Southern rail barons to get information she can sell to the Union army. Grace offers to help, and the pair embark on a complicated caper. While Gillman’s narrative skills have improved since As the Crow Flies, they still aren’t as strong a storyteller as they are an artist. But Grace and Flor are engaging figures, and Stage Dreams’ sweeping lines and dimensional shading are rich pleasures. In an afterward, Gillman offers historical background on trans men in the Confederate army and the American West. Their earnestness and dedication make Stage Dreams memorable.

Etelka Lehoczky has written about books for The Atlantic, The Los Angeles Review of Books and The New York Times. She tweets at @EtelkaL.