The main stage at the Latino Cultural Center has been an absolute barn for the two small companies that use it: Cara Mia Theatre and Teatro Dallas. Despite its sophisticated equipment and ample support facilities, the space — too wide, too shallow, too distant from the stage — is more like a high school auditorium than an effective theater. It seats nearly 300 people, so it should be intimate, but it’s the farthest thing from it. If anything, it’s often hampered and overwhelmed some of Cara Mia’s productions, preventing them from being truly effective.

In contrast, the new theater — still unnamed — holds 140 people at most. Cara Mia’s Latinidades festival is opening with a performance out on the plaza, a short film, live music, dancing and a tour of the new black box — and then Virginia Grise’s one-woman show and touring production, Your Healing Is Killing Me. For that play, the audience will be COVID-distanced with only 48 seats at tables. 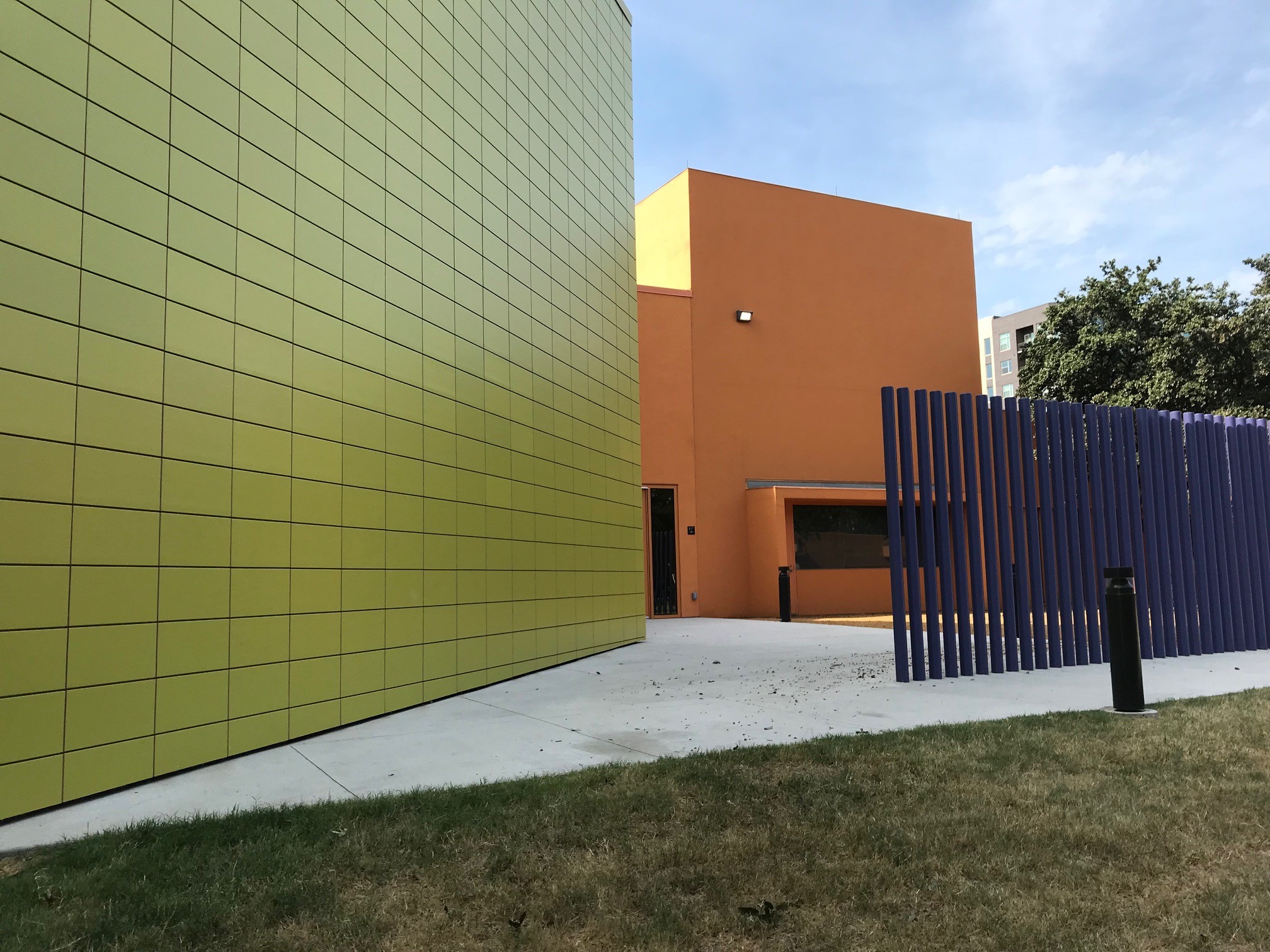 The exterior of the new black-box theater – the ‘green cube’ on the backside of the Latino Cultural Center – fits the Legoretta + Legoretta-designed aesthetics of the LCC. Photo: Jerome Weeks

To include the black-box theater into its layout, the Latino Cultural Center has gotten a large new cube added to what’s essentially its ‘backside,’ next to the loading dock. But instead of being an obvious, stuck-on expansion, the green box has been designed to fit the center’s traditional Mexican-inspired aesthetics, a style devised by the distinguished architecture firm, Legoretta + Legoretta. The style is characterized by a playful use of color amplified by bold geometric shapes, Spanish tile, a public plaza and a ‘light tower.’ (These same elements can be seen in the Legoretta-designed Fort Worth Museum of Science and History.) From the outside, the black box is actually a green box, and it balances out the orange cube that contains the center’s art gallery.

At the very least, the new stage facility will let the LCC present two live shows at once, and it’ll certainly permit more inventively-designed  productions. But it’s not completely finished out. For its festival, for instance, Cara Mia is renting the lighting equipment. And the company is still raising $500,000 to help pay for the space. The city’s grand, official opening will come next spring.

But it’s taken 18 years and $4.5 million to get to this point. And for Teatro Dallas (which will open a new show, The Merit System, here in October) and for Cara Mia, this’ll be home for the next 23 years, at least. Since 2019, they’ve both been the resident stage companies at the Latino Cultural Center.